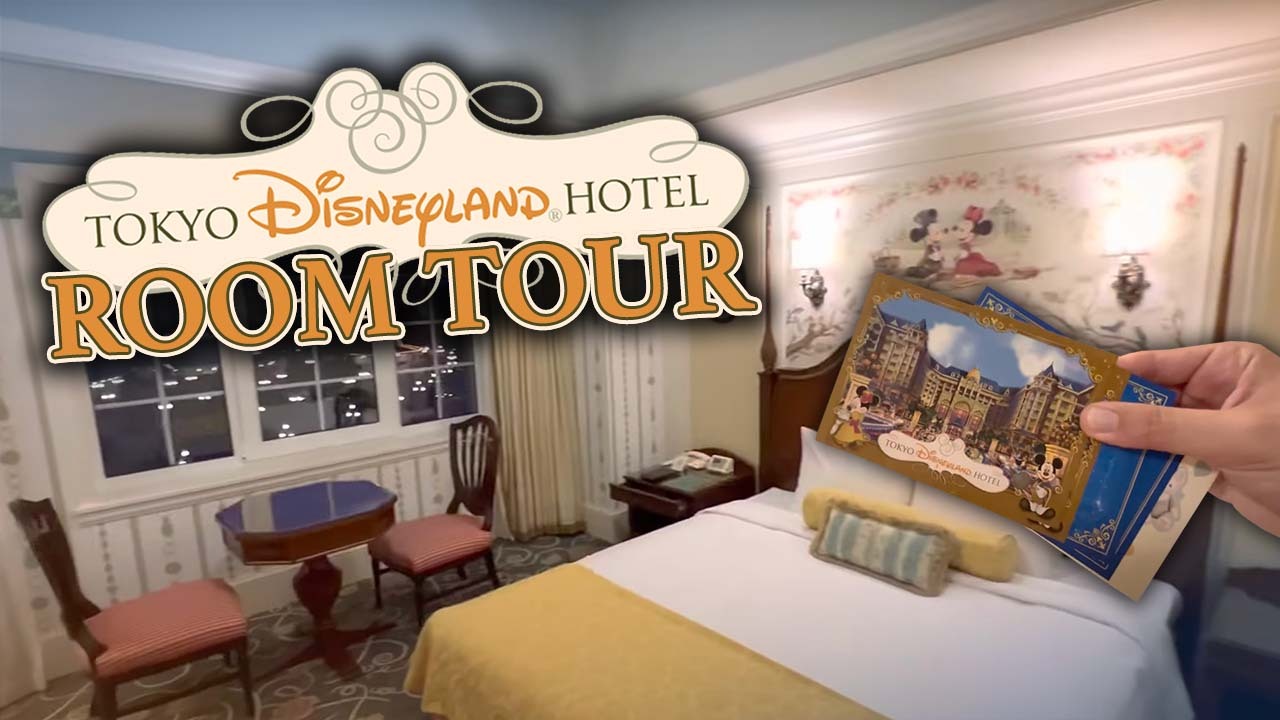 When you visit Tokyo Disney Resort, you might think of the Tokyo DisneySea Hotel MiraCosta as the only option for luxury at the resort, but you’d be missing out! Just across from the entrance to the Kingdom of Dreams and Magic, you find the Tokyo Disneyland Hotel, and recently one of us had the chance to stay in a Standard Superior Park View room. So join us for a tour of these newly-refurbished guest rooms!

For you Americans and others out there, Tokyo Disneyland Hotel is similar to Disney’s Grand Floridian Resort & Spa in architecture and style, taking inspiration from the early 20th century Victorian style as an extension of World Bazaar across the street. It opened in 2008 as part of the resort’s 25th Anniversary celebration.

The exterior was just repainted over the course of two years, looking fresh as a daisy once more!

There are two entrances — one facing the city and highways for car and express bus access, and one facing the park and the Disney Resort Line for guests coming by public transit.

At night, the hotel, right behind Tokyo Disneyland Station, is lit up.

It’s such a natural architectural fit that you’d never know the station was added seven years before the hotel! This all used to be the parking lot for Tokyo Disneyland from 1983 to 2005.

As previously mentioned, the other side of the hotel is built for accommodating guests in vehicles. Cars and buses pull under the porte-cochère.

It’s surrounded by fountains and foliage. Like Disney’s Grand Floridian Resort & Spa, the roof is lined with lights to highlight the hotel’s outline.

There is an “Alice in Wonderland”-themed garden, featuring these topiaries of playing card symbols.

Benches feature the Tokyo Disneyland Hotel logo in gold on their arms.

A large “Fantasia”-inspired fountain has a Sorcerer Mickey statue atop a spiral of rocks. Similar fountains exist at Walt Disney Studios Park in Paris and at Hong Kong Disneyland.

Water shots into the fountain from all around, including from bucket-shaped spouts held by brooms.

Around every entrance is a plaque bearing the hotel’s name along with silhouettes of Mickey and Minnie.

Statues of Mickey and Minnie in their Tokyo Disneyland Hotel-specific costumes flank the bus-side entrance.

In the lobby sits a very ornate Victorian dollhouse, which brings to mind “Foster’s Home for Imaginary Friends” if you ask me.

A peek through the windows reveals a few Disney friends!

Other references are visible throughout, from a bathing Ariel to the Magic Carpet from Aladdin, and even a replica of Jane and Michael’s room from “Mary Poppins!”

Disney characters make some cameos, including Lady and the Tramp, and Scamp’s in there too.

Like the Grand Floridian, we also have a birdcage elevator — but it goes all the way up our hotel!

Every floor has a different character in the stained glass window pattern at the elevator bank. Ours had Goofy.

The elevator banks open up into this central vestibule, from which hallways branch out in all directions.

Light fixtures in the halls have little Mickey Mouse heads on top.

The wall art continues up here, with the citizens of World Bazaar skating on the moat around Cinderella Castle during winter. If only it actually got cold enough for that in Tokyo!

Some prints also feature Belle and the Beast.

These rooms were newly refurbished in 2020 to help modernize the hotel, with new wallpaper and carpeting installed as well as some equipment upgrades.

The transom above the bathroom features subtle Mickey silhouettes.

Across from the bathroom is a vanity with an incredibly large mirror.

The hotel’s insignia is atop the mirror.

On the desk itself is a very ornate pattern with a Mickey silhouette at the very center.

Like many Japanese hotels, the restrooms at the Tokyo Disneyland Hotel separate the toilet from the shower and bath area. The sink is located directly between the two.

The traditional Japanese way to clean oneself is to shower and scrub the dirt off yourself before relaxing in a bath, already clean. Thus the shower is separated from the bathtub.

Japanese bathtubs are quite deep as a result of this tradition, making it a perfect place to soak after a long day at the park.

Soap, shampoo, and conditioner are kept in separate and reusable bottles as Tokyo Disney Resort moves towards fulfilling their SDGs.

The towels are also embossed with the hotel insignia.

An opaque window looks out into the bedroom area.

There is both a handheld shower attachment and an overhead waterfall-style shower head.

The shower room door is opaque.

The sink is stuffed with amenities.

The mirror is less ornate than that of the vanity across the hall.

Four glasses sit on coasters to the left.

To the right is a tray full of disposable hotel-specific amenities, including four toothbrush kits, a plastic cup for rinsing, and an “amenity kit.”

Some kids’ toothbrushes and a box of tissues sit in one drawer.

Below the sink is a small wheeled cart with even more space for storing your care products.

The room comes equipped with a Toto washlet, which includes a bidet.

The controls are written only in Japanese, but are fairly intuitive.

Next to the vanity in the hall sits a small closet.

The green, white, and red rose and bird carpet pattern was installed in 2020 to make guests feel as if they were sleeping in a garden.

The closet contains an extra pillow and blanket, a paper bag for the hotel, a shoe horn, and four sets of disposable slippers.

Hotel-specific bags were discontinued in 2020 in favor of a generic blue “Disney Hotels” bag.

A small dry bar is in place between the closet and the bedroom for making tea.

A kettle and an ice bucket are included, as well as tea cups and some provided tea.

On the walls hangs sketches which bring to mind the humanoid characters from the 2017 “Beauty and the Beast” live action remake.

More glasses wait in the drawer below.

Mirrors, mirrors everywhere! A third mirror sits across from the dry bar.

The room itself is quite spacious, with a large queen-size bed at the center. Two end tables flank the bed, and a small sitting table is placed next to the window.

On the other wall is a luggage rack and a small TV armoire.

The sitting table features two chairs and is perched right next to the premium Park View window. More on that later.

A small Mickey Mouse silhouette flanked by ornate patterns lines the corners of the table.

A large lamp in the corner provides extra light to the room.

The TV is surprisingly outdated, appearing as if it dates back to the hotel’s opening itself in 2008. A trash can sits next to the armoire, with separated receptacles for burnable and nonburnable garbage, standard in Japan.

Atop the armoire is the wardrobe’s face from Beauty and the Beast.

Four bathrobes are available to guests staying at the hotel, and guests can have their laundry done for a small fee.

The highlight of the newly refurbished rooms is of course the bed. It’s queen size with a fairly hard mattress, standard in Japan.

At the center of the headboard is a blueprint sketch of Cinderella Castle.

One end table holds all of the appointments you’d typically find — phone, alarm clock, and notebook.

The notepad is kept in a leather case embossed with the hotel’s insignia. A generic red pen is included.

Inside we have a hotel directory and a notepad.

Each Cast Member who prepares the room leaves behind a small card with their name on it.

The rather outdated-looking clock can also control the lights in the room. Labels for this are in English.

Complimentary postcards themed to the hotel as well as Duffy & Friends are included in the drawer.

The other end table also has a drawer and some outlets.

Two standard type-A outlets common in North America and Japan are included, as well as one USB outlet.

On each side of the bed hang silhouette portraits of Mickey and Minnie having tea in the garden.

At the center are Mickey and Minnie in their hotel costumes, having tea and a picnic in the gardens downstairs.

Pluto’s off chasing a butterfly.

The new wallpaper matches the garden aesthetic, and even features some fun hidden Mickeys in the pattern.

The window, when opened, has a lovely view of Tokyo Disneyland.

In the corner of the room is a luggage rack for placing your suitcase.

When staying at Deluxe Hotels at Tokyo Disney Resort, special tickets to use the Disney Resort Line Monorail are given for free. This benefit will end on March 31, 2023, and guests will be required to purchase tickets for the monorail on their own.

Because we were staying near a birthday and informed the hotel in advance, a special birthday card was given to us with the hotel’s design on the front.

Inside are Mickey, Minnie, Donald, Pluto, and Goofy in Victorian outfits to wish us a happy birthday!

The real star of this room, however, is the view.

While Tokyo DisneySea Hotel MiraCosta may be part of the park itself, the views out of the Tokyo Disneyland Hotel are just about as stunning.

Outside the window is a vista of the resort’s icons. We can see the entrance of the park, of course, as well as Cinderella Castle, the spires of Tomorrowland, Space Mountain, the Beast’s Castle, Big Thunder Mountain, and Splash Mountain. Off in the distance as well are Mount Prometheus and the Tower of Terror at Tokyo DisneySea!

It’s a truly magical view to wake up and see.

Would you stay at the Tokyo Disneyland Hotel? Let us know in the comments below!