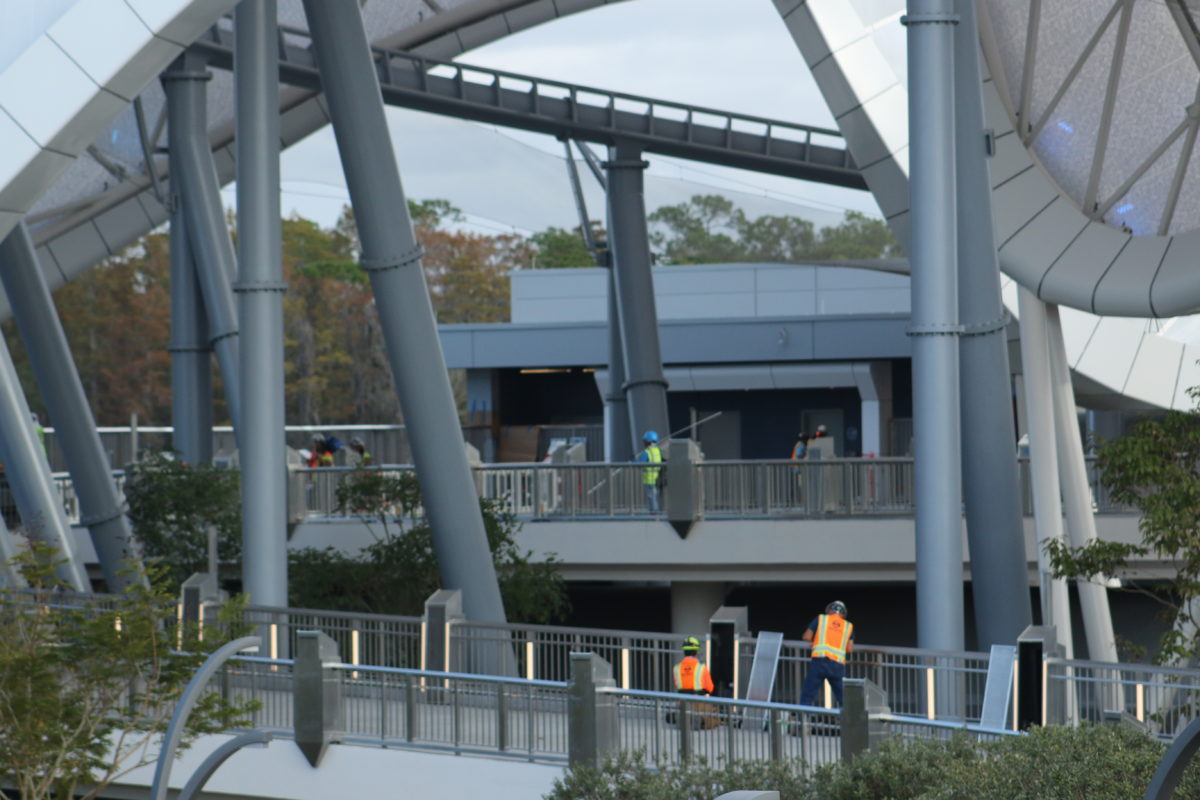 TRON Lightcycle / Run is coming early next spring to the Magic Kingdom, and we are continuing to learn a little more about it as the opening draws near. The latest information we received is that the lockers will open from sides and be accessed via MagicBand and the My Disney Experience app.

The above photo shows the current view of the building which will house lockers for oversized items, which will also be home to restrooms. The standard, double-sided lockers will first be accessed by guests in the queue, and of course again after disembarking from the Lightcycles.

A double-sided system is already in use over at VelociCoaster in Universal’s Islands of Adventure. The system allows guests to deposit items from the entrance side and withdraw items from the opposite side while exiting. Lockers are an uncommon feature at Disney rides, with Kali River Rapids at Disney’s Animal Kingdom being the only attraction with a locker bay.

However, it’s no secret that the resorts tend to watch each other and learn. Many attractions at Universal Orlando Resort require lockers, and the old style of locker rooms is often overcrowded and chaotic as guests both entering the queue and leaving are packed in, attempting to access a locker. Guests cram in around the kiosk to get a locker.

The double-sided system eliminates a lot of the bottlenecking, making the experience easier for guests. There may not even be kiosks, given that the system will allegedly be accessed on the My Disney Experience app. The exact process is unknown, but based on other uses for the technology, guests could potentially be given the option to use a locker based on their location, select one in the app, and then use their MagicBand to unlock and lock it.

TRON Lightcycle / Run already exists at Shanghai Disneyland and uses lockers occasionally, but in later years mostly switched to a rolling cart that guests place items in before boarding and retrieve at the end of the ride. All personal items must be secured in a locker to ride TRON, given the nature of the ride vehicle.

When guests “enter” The Grid, the digital world of TRON, for the ride, they’ll board the movie’s iconic lightcycles (similar to motorcycles). Like AVATAR Flight of Passage, riders straddle a narrow seat. Unlike Flight of Passage, there is nowhere to safely store your belongings nearby.

At other Walt Disney World roller coasters, such as Expedition Everest or Rock ‘n’ Roller Coaster, guests can stow personal items in a pouch inside the ride vehicle. The Lightcycles and Light Runner cars do not permit this.

After being initially announced in 2017, TRON was supposed to arrive at the Magic Kingdom in time for the park’s 50th anniversary in 2021. Due to delays caused by the COVID-19 pandemic in the spring of 2020, it missed its original mark by more than a year. Disney has confirmed the attraction will open in spring, and sources indicate it should open to the public during the first week of April 2023.

How do you feel about lockers accessed through an app? Let us know in the comments.

New Adjustable Rose Gold Minnie Ear Headband Available at Walt Disney WorldMay 12, 2022
Imagineering’s Impressive Droid AI Assistant D3-O9 Is Only in Testing, May Not Appear on Your Star W...February 28, 2022
Showtimes Removed for Encanto 'We Don't Talk About Bruno' Projection Show on "it's a small world" at...September 2, 2022