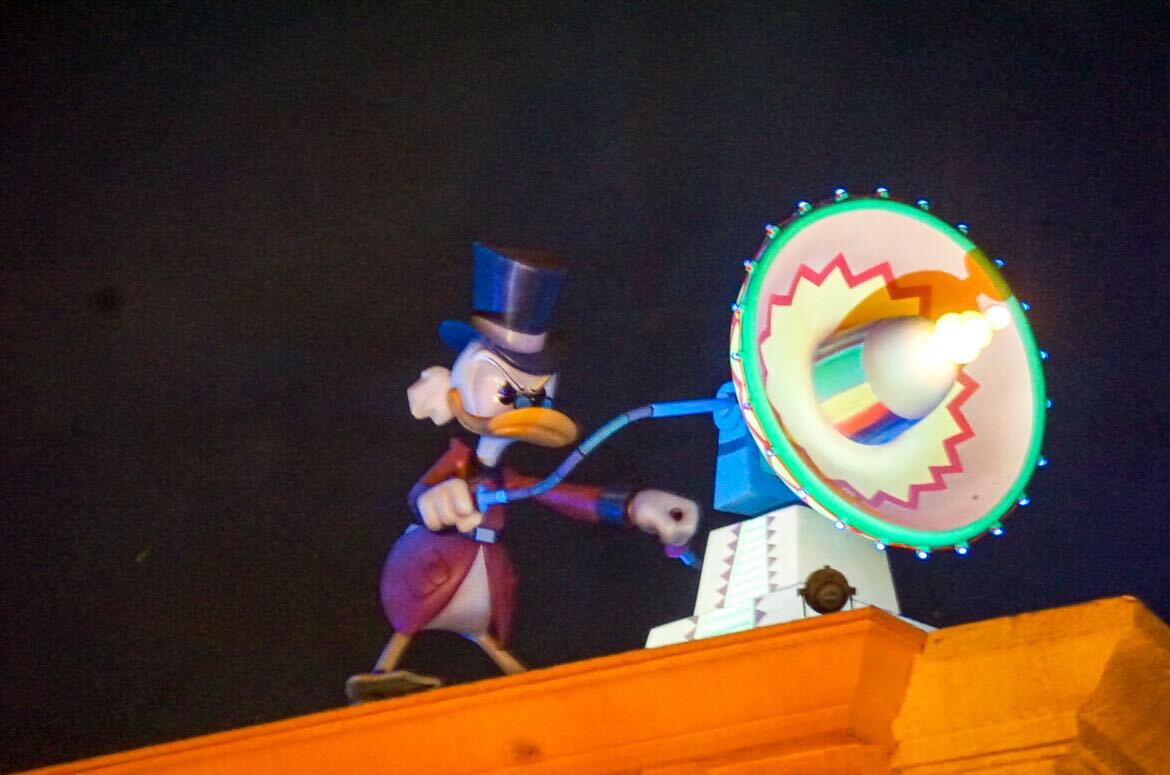 The new DuckTales World Showcase Adventure game debuts at EPCOT on December 16, but we were able to participate in a soft opening. There’s no specific order in which you have to play the game, so guests can start with whichever pavilion they prefer. Here’s our playthrough of some of the Mexico missions.

Watch our first full playthrough of the Mexico Adven-share below, and keep reading for photos and more information.

Watch our second playthrough, with different missions and added sound:

Each country has a main “adven-share” where you need to help the DuckTales gang recover one of the 7 Plunders of the World from dastardly foes. There are hijinks and mishaps along the way as you move through the pavilion as instructed. There are multiple different missions, assigned randomly, so each game is a little different.

At the start of this adventure, Webby informs us we’ll be participating in the archaeological expedition of the century. We’ll be recovering the Lava Idol of Puerta Toucani, which Scrooge says will be no easy task. We’ll be crowd-sourcing and live-streaming from the Lavapalooza Food Fest.

One of our new followers (@chiliconcarnage23) looks suspicious.

It’s Black Heron, Mrs. Beakley’s greatest nemesis. Black Heron reveals she’s using the festival as a cover for her plot to steal the Lava Idol and use its power to launch a doomsday device.

Black Heron calls Mrs. Beakley Agent 22 and Beakley references S.H.U.S.H., the agency in “DuckTales” that was trying to bring down F.O.W.L.

Webby will be tracking down Heron while Scrooge goes after the idol.

Dewey has already infiltrated the festival and told the organizers that there is a new group: the Three Caballeros! But Huey, Dewey, and Louie will be posing as the famous trio. We need to help the rest of the gang infiltrate the temple, find Black Heron’s lair, and get to the idol. We are first directed to enter the temple and head into the market.

Assistant Request Mission: The Spy Who Shoved Me

Specifically, she was on the ramp near this birdcage.

After finding the birdcage, we input what is printed on the side of the crate underneath it. Then the parrot recites a conversation it overheard with Black Heron.

We learned Black Heron’s secret base is under the volcano!

Next up, Dewey says Black Heron is using one of the Three Caballeros’ samples as a musical key to unlock her doomsday device. We need to get the sample.

Dewey isn’t sure which sample she’s using and her team is watching the nephews like a hawk. We distract the bad guys with “VIP” (Volcano Incineration Perimeter) passes.

We then head into La Tienda Encantada and find the guitar atop one of the merchandise displays.

We correctly identified what is on the shelf next to the guitar.

We scan the guitar to ID the song sample. It strums a few chords and our phone analyzes it, downloading the correct musical key.

Launchpad arrives next and we learn Scrooge is lost. He needs a LIDAR scanner from Gyro to map the pyramid. It broke in a crash, but Launchpad has repaired it.

We need to power the scanner. We stand at the bottom of the ramp and see how many lanterns have a red dot.

This was a little confusing — the red dot is in the glass panes of the lanterns above the ramp.

After correctly identifying the number of lanterns with red dots, we can power up the scanner.

Scrooge pops up from a roof and sends a transmission toward the volcano.

During our second playthrough, we got two different missions. The first was The Tunnel Tangle.

Webby needs help getting through the tunnels, so we have to blast a pathway for her. We were sent to the fountain near the ramps.

We counted the number of unique tile patterns lining the bottom of the fountain. Don’t worry: it’s just one.

We then found the balcony above La Cava de Tequila. After pressing ok, Webby pops out of the vase on the balcony, free from the tunnels.

Mission: A Chip Off the Old Quac

Our second new mission sent us to a mechanical Dia de Los Muertos figure from the festival. We needed to use the figure to check the pyramid for booby traps.

Once in front of the skeleton, we had to find its Mexican name and then activate the spy robot. After moving away, the ducks were able to download a map.

We rendezvous with Mrs. Beakley to stop Black Heron.

The new Caballeros need to disable the doomsday device so they engage Operation Lavapalooza.

Webby gets us in position on the balcony at the pavilion’s entrance with a view of the volcano.

We need to identify the piñatas hanging over the balcony — but we hit another snag here. The piñatas aren’t visible when standing on the balcony, so we had to go back down the ramp to count them.

After relaying our piñata-based signal, Beakley shows up and tells Heron that Scrooge almost has the idol and we have deactivated her weapon. She announces she has a backup plan: a rocket aimed at the pyramid and Scrooge. We use the app to trigger the lava, which interferes with the weapon’s controls. The lava effect was not working when we first played, but the mission was still completed and Scrooge acquired the idol.