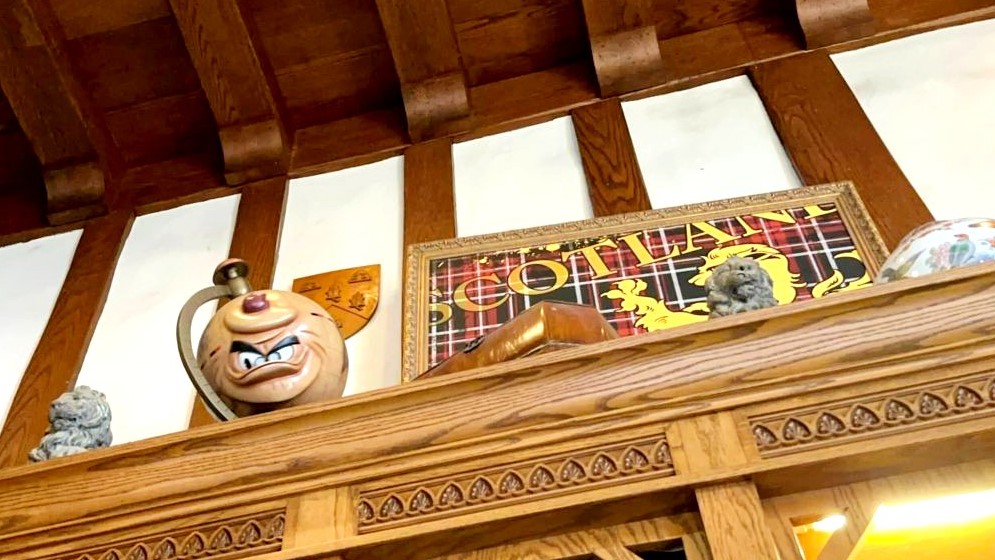 On our mission to complete the new DuckTales World Showcase Adventure game, we headed to the United Kingdom pavilion. The new game utilizes the Play Disney Parks app to take guests around six World Showcase pavilions to uncover the Plunders of the World alongside the DuckTales team.

Once you’re logged in, you can select the game by swiping through the options and tapping “Play.”

It will take you to the start screen, where you can choose “Let’s go!” to start the game or “Exit” to go back.

Watch our first playthrough of the United Kingdom Adven-share below. This was during Cast Member previews and sound had not yet been added to the game.

Read on for photos and more information.

The Magic Mulligan of Moorshire is an enchanted artifact able to grant a do-over. It’s guarded by kelpies that will try to lure you into a watery trap.

The kelpies agree to let us play for a chance to win the Mulligan in a round of golf. Scrooge will go up against Flintheart Glomgold, who is playing on behalf of the kelpies. Glomgold is going to use the power of the Mulligan to relive his victory over Scrooge again and again. But Glomgold has rigged various booby traps! Before we tee off, we have to clear the traps.

Glomgold invites us to tea before golf, but this seems suspicious, so we investigate. We went to the Tea Caddy, where Glomgold bought his tea and told a Cast Member the secret phrase provided to us. The Cast Member told us to be sneaky and gave us a bag of chai tea. On the phone, we then rearranged the letters to spell “chai.” We then find out that Glomgold switched the tea bags: the chai tea bag actually has snoozy time tea in it!

On the next mission, Webby has found suspicious technology inside the tourney winners’ plaque.

We go to Sportsman’s Shoppe and find the plaque near the register.

We have to enter what is printed on the plaque. It spins to reveal a pictogram message.

We have to arrange the pictures to create the phrase “I love golf.”

Webby finds a tracker in the plaque, and we leave before Glomgold shows up. Mission complete.

During our second playthrough, we got a different first mission: A Goofball’s Golf Ball.

We then received a golf ball from a slot inside the booth. It turns out this is a Glomgold trap.

We took the ball to Gearloose’s scheme scanner at the entrance of the Sportsman’s Shoppe.

We used this to scan the golf ball.

Turns out our golf ball doesn’t have a trap in it. Glomgold got his own bad ball.

Webby and Louie have been checking for booby traps in the golf cart. Glomgold is planning to use an enchanted golf club to win.

The ducks send us to Crown & Crest, where Glomgold makes his plans. Inside, we must count how many frames are on the wall.

The anti-enchantment app on our phone will do the rest.

The pistol on the wall goes off (don’t worry, it’s just an effect), hitting a globe that spins to reveal Glomgold’s face. Glomgold is planning to take over the world!

Glomgold arrives, and it’s time to play for the Mulligan. Glomgold tells Scrooge to go first and says he even marked a spot for him. Scrooge decides to practice his swing first.

While Scrooge stalls, it’s our job to figure out Glomgold’s final scheme.

We head to the alley past Toy Soldier in the back of the pavilion.

Here, we find plaid curtains in one window.

Scrooge lures Glomgold into his own trap by sharing golf tips while we wait for a signal. Then, we sabotage the trap, filling the window with water. Thunder and lightning go off, and Glomgold can be heard gargling.

We have to move away from the window before Glomgold escapes.

Mission: The Sword in the Cards!

At this time, the kelpies arrive. They forget which Scottish duck they were supposed to trap. Since Glomgold is trapped, they hand the Mulligan over to us.

What do you think of the new DuckTales World Showcase Adventure game at EPCOT? Let us know in the comments, and stay tuned to see the other six missions (including the finale)! Have a look below at the ones we’ve done so far!