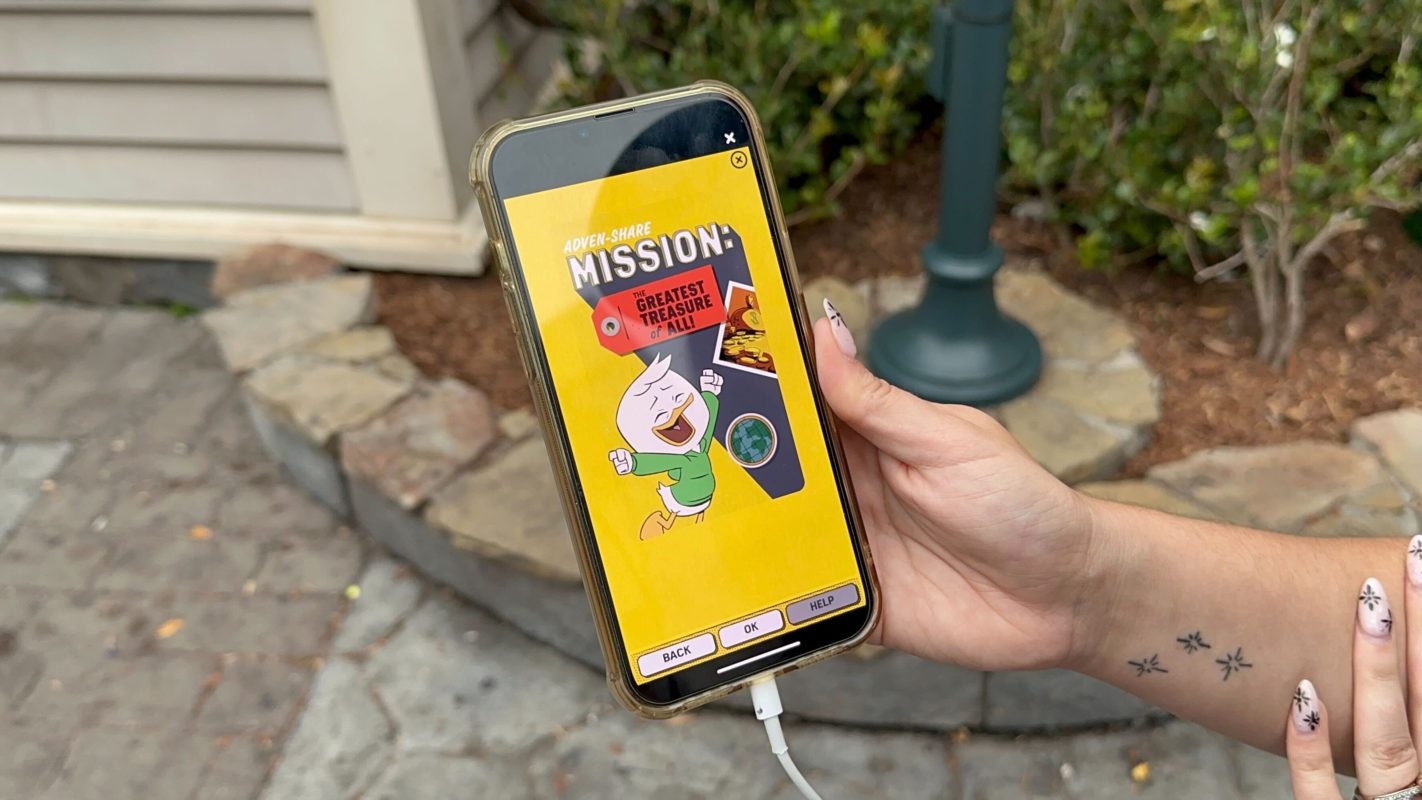 After completing the seven “adven-shares” of DuckTales World Showcase Adventure in EPCOT, guests are treated to a small finale in the game.

Before reading about the finale, check out our playthroughs of the pavilion adventures:

Note: each pavilion has several different missions that are randomly assigned, so your game might look a little different than ours. You can also complete the adventures in any order. Once they are completed, the finale will become available.

Watch our videos of the finale then read on for photos and a breakdown of what happens.

Below is our first playthrough of the finale, before sound was added to the game.

And here is our screen recording of the finale with sound:

The finale is played entirely on your phone, so you don’t need to worry about being in a specific place.

Unfortunately, Magica De Spell is back. She harnesses the artifacts’ power and captures the family. Beaks arrives to team up with Magica. He’s scanned the artifacts by hacking our apps and turns the “DuckTales” gang into tiny artifacts.

Magica plans to scatter the artifact family across the globe unless Scrooge hands over his fortune. We have one hour to get to the Waddle building. Scrooge tells us to distract the villains while he figures out how to access his app (he’s forgotten his password).

Mission: Foes of a Feather!

It’s time to call upon an unexpected ally: Glomgold.

Glomgold is busy singing “GlomTales,” his own version of the “DuckTales” theme.

We tell him that he’s not the best villain, which riles him up.

Meanwhile, Magica is cursing the other members of the family.

Scrooge needs us to get a hold of Magica’s staff, then use our app to reverse the curse.

Mission: The Enemy of My Enemy is My Enemy!

Glomgold arrives just in time. He’s upset that Magica didn’t include him in her evil plot. Magica and Beaks retort that he wasn’t needed. Glomgold takes Magica’s staff, and we manage to get a hold of it. We hack the staff and get the family back.

Magica and the rest of the bad guys are defeated and Scrooge is going to take care of them.

This is a cute, fun game. We like that you can get different versions and the missions shuffle around, so it’s never exactly the same.

The story does move quickly and it feels like there is a lot to remember. Going back isn’t always an option without redoing the entire task. You can redo some effects but not all and sometimes when we redid something, nothing happened. Only two effects failed entirely for us.

Our major problem was phone service, which isn’t great in some of the back corners of the World Showcase pavilions. If you lose service at any point, you have to walk around to find service again and restart the “adven-share” or mission you’re working on. We had to restart the game a few times because of this.

We did enjoy interacting with Cast Members, who are part of some of the missions, and they also seemed excited.

You don’t need to know “DuckTales” to play, although “DuckTales” fans will definitely enjoy the characters and references.

If you want to do the entire game, it is time-consuming. Doing two or three in one day would be fun, though, and we’ll be playing again!