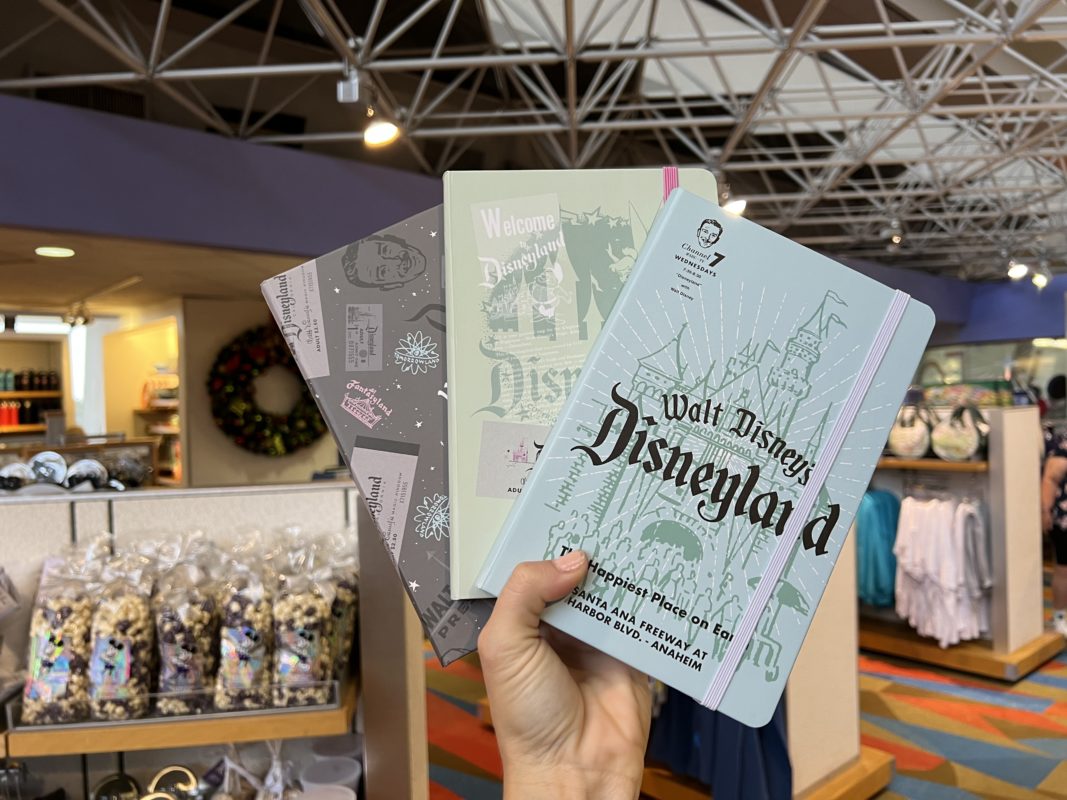 A new set of three Disneyland journals, part of the “Disney Eras” collection honoring the 100th anniversary of The Walt Disney Company, is available at Walt Disney World. We found the set in Bayview Gifts at Disney’s Contemporary Resort.

The journals all have elastic bands to keep them closed.

First up is a blue journal featuring Sleeping Beauty Castle and a crowd of people on the cover. It reads “Walt Disney’s Disneyland,” the name of a TV series Walt hosted for a few years after the park opened. His face is in the corner of the cover, advertising the series on Channel 7.

The inside cover features a pattern of 1950s Disneyland iconography like the castle, the Rocket to the Moon rocket, Monorails, Disneyland Railroad trains, and Skyway buckets.

The pages are white with blue lines. There’s a teal blue ribbon to mark your spot.

The back is blank. This journal has a pink elastic.

The second journal has a blue elastic set against a dark gray cover also featuring the “Walt Disney’s Disneyland” logo. Tinker Bell floats next to the logo and it’s also patterned with Walt’s face, Disneyland tickets, the castle, and land logos.

The tickets, Walt, and the castle are pictured in black-and-white, while the land logos are pink, blue, and yellow.

The interior cover pattern is the same as the first journal but in white.

It has dark lines and a yellow ribbon inside.

The third journal is green, with Tinker Bell featured above the Disneyland logo on the front. Some towers of Sleeping Beauty Castle are silhouetted in the background. A “Welcome to Disneyland” column is printed in white across the towers. Two Disneyland tickets, one gray and one pink, are at the bottom.

This journal has a pink elastic band.

Oh and don’t try to get clever — a disclaimer on the back states that the tickets printed on the front are not real or valid for park entry.

The inside cover of this journal is pink with the same pattern in white.

The lines on the pages and ribbon are also pink.

Will you be using these journals, maybe to catalog your Disney Park adventures? Let us know in the comments!

Check out the 100 Years of Wonder platinum collection.