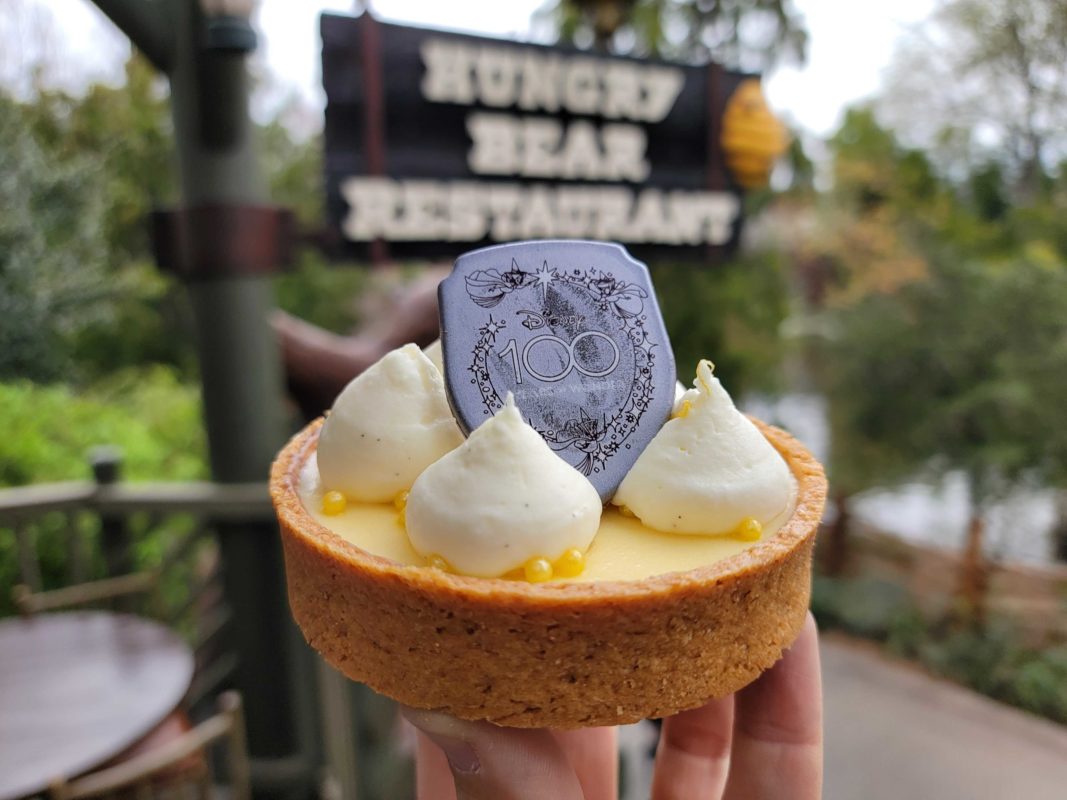 Hungry Bear Restaurant is getting the Disney 100 Years of Wonder celebration started early at Disneyland with the debut of the Lemon Chiffon Pie. The Lemon Tea Cake also debuted for the anniversary, and we’re seeing a bit of a theme there.

The pie is also available at a variety of venues across both parks.

In addition to the listed ingredients, the pie is topped with a milk chocolate medallion of Flora, Fauna, and Merriweather flying and spreading magic around the “Disney 100 Years of Wonder” logo.

This was a very well balanced pie. The lemon is extra tart, the Chantilly cream is sweet and smooth, and the graham cracker crust is not overly sweet, blending well together into one delicious bite.

It’s not so sweet that it’s overpowering, but it brings a nice, sugary punch to the tart lemon chiffon when eating it, delivering a proper amount of sweetness.

Taking a bite of almost entirely graham cracker crust on the corner leads to a less interesting experience, but if the quantities are relatively equal for each ingredient on the fork, it comes together well. Bonus points for having real lemon zest shavings atop the vanilla Chantilly. We thoroughly enjoyed this tart, even more than we thought we would.

The Disney 100 Years of Wonder celebration officially begins at the Disneyland Resort on Friday, January 27, though some elements have begun to emerge, including new plates, cups, and popcorn boxes.

There are also two new Disney100 popcorn buckets: a standard one with character art and another that is Magic Key Holder exclusive with special artwork featuring Walt Disney.

It was announced today that all Disneyland Resort guests will receive complimentary on-ride PhotoPass digital downloads starting February 4 and continuing for the rest of the anniversary celebration.

Watch our video review of the first two Disney 100 Years of Wonder treats below.

The Walt Disney Company’s 100th anniversary celebration will commence on January 27th at Disneyland Resort in Anaheim, California. Guests will be able to mark this historic occasion by experiencing the grand opening of the new Mickey & Minnie’s Runaway Railway attraction, as well as two all-new nighttime spectaculars: World of Color – One at Disney California Adventure Park and Wondrous Journeys at Disneyland Park.

Recently, Disney announced that “Wondrous Journeys” will be a new nighttime spectacular at Sleeping Beauty Castle. The show, which will run 13 minutes, will pay homage to every Walt Disney Animation Studios film to date, taking guests on a journey filled with artistry, music, and storytelling. State-of-the-art projection effects will be seen on Main Street, U.S.A., Sleeping Beauty Castle, the façade of “it’s a small world,” and the Rivers of America. On select nights, the show will add fireworks in the sky above Disneyland. It will also feature a new song, “It’s Wondrous.”