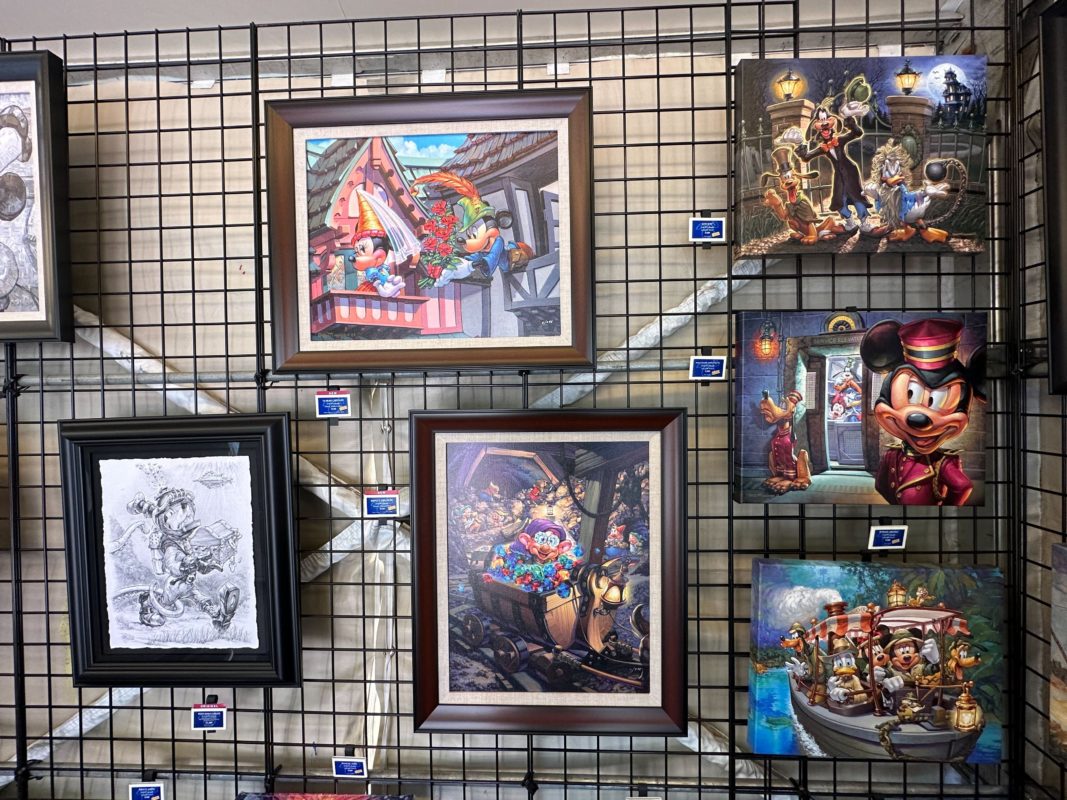 McCullough Art is back for the 2023 EPCOT International Festival of the Arts, with a booth featuring their Disney-inspired work located near the Refreshment Outpost.

The kiosk has previously offered art featuring classic Disney characters and beloved Walt Disney World attractions, including the Jungle Cruise, Space Mountain, The Twilight Zone Tower of Terror, and EPCOT’s own World Showcase. Each piece has been known to contain a number of hidden Mickeys.

Amid the Disney character art is a piece featuring Mickey and Minnie on the Main Street Trolley.

Another piece sees Mickey and the gang on Big Thunder Mountain Railroad.

Other choices include a rendering of Cinderella Castle decked out for the 50th anniversary or Mickey and Friends aboard a Jungle Cruise boat.

“Dopey’s Treasure,” created by Greg, is inspired by Seven Dwarfs Mine Train in the Magic Kingdom. It depicts Dopey in a mine cart surrounded by colorful diamonds, while the rest of the dwarfs continue to dig behind him. The piece contains six hidden Mickeys.

Festival favorite Figment can be found here as well.

“Fire ‘n Ice” is a work by Nath in a remnant style, created using a razor blade. The piece shows Bruni sitting on Olaf’s head, enjoying a snowy day in the forest. Can you spot all six hidden Mickeys?

“Fun with Spells,” a piece by Greg, shows Mickey Mouse in his sorcerer’s outfit, riding a spell book through a whirlpool of water, just as he does in “Fantasia.” Even though the mouse is the subject, there are three other hidden Mickeys within the art.

Nath also created “Dancin’ Time,” a companion piece in a remnant style to last year’s “Be Our Guest.” While that one depicted Lumiere in the finale of the classic song from “Beauty in the Beast,” this year’s offering showcases Cogsworth dancing in the same setting. This contains six hidden Mickeys.

Rounding out the new art is “Ye Olde Chivalry” by Greg, portraying Mickey and Minnie, appearing in outfits similar to the ones they wear in the 1938 short “Brave Little Tailor.” Appearing in separate balconies, Mickey hands Minnie a bouquet of roses. Two hidden Mickeys can also be seen in this work.

Pricing for the art is as follows:

Which piece is your favorite? Share your thoughts in the comments, and keep reading WDWNT for complete coverage of the 2023 EPCOT International Festival of the Arts!