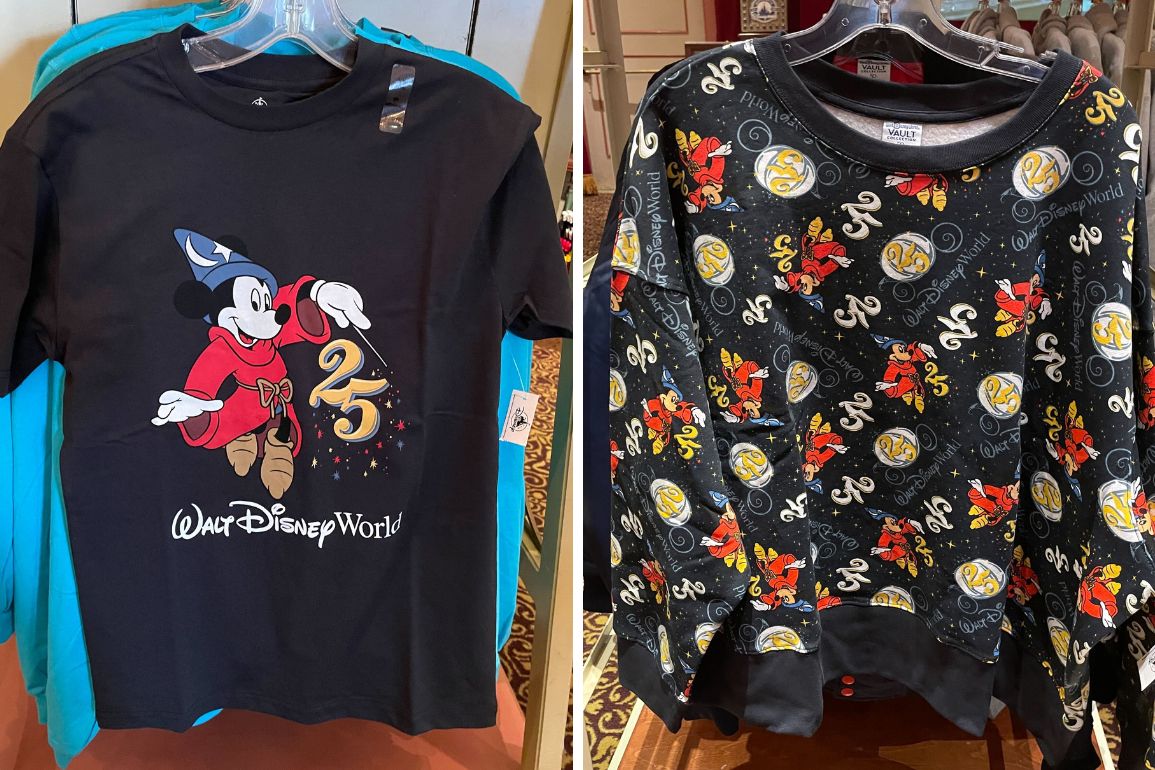 As part of the Vault Collection offerings that have appeared throughout the Walt Disney World 50th Anniversary celebration, we spotted some new apparel paying tribute to the park’s 25th anniversary inside the Main Street Cinema at Magic Kingdom.

In this t-shirt offering a blast from the past, Sorcerer Mickey waves his wand above the Walt Disney World 25th Anniversary logo. The red, yellow, and blue fireworks and starbursts featured in the logo, accompanied by Mickey’s blue sorcerer’s hat and red robe, stand out screen printed on the front of this black t-shirt.

Fostering real “Remember the Magic” vibes, the latest addition to the 50th Anniversary merchandise channels the 25th, which ran from 1996 through 1998 and saw the transformation of Cinderella Castle into a pink birthday cake. The Walt Disney World logo is screen printed on the bottom of this t-shirt in white.

This time, Mickey is accompanied by Cinderella’s Pumpkin Coach carriage also donning the yellow “25” logo. The Walt Disney World logo face in silver is printed just below each repeating carriage.

If you prefer your blast of nostalgia on the sweeter side, a hoodie featuring the 25th Anniversary Birthday Cake Cinderella Castle is also available for a limited time as part of the 50th Anniversary vault drop. A vault collection baseball cap and long sleeve polo have been spotted in the Main Street Cinema, as well.

Will you be reliving the ’90s with either of these two new 25th Anniversary Vault Collection items, or are you living for the now as the 50th Anniversary celebration comes to its close? Let us know in the comments below.