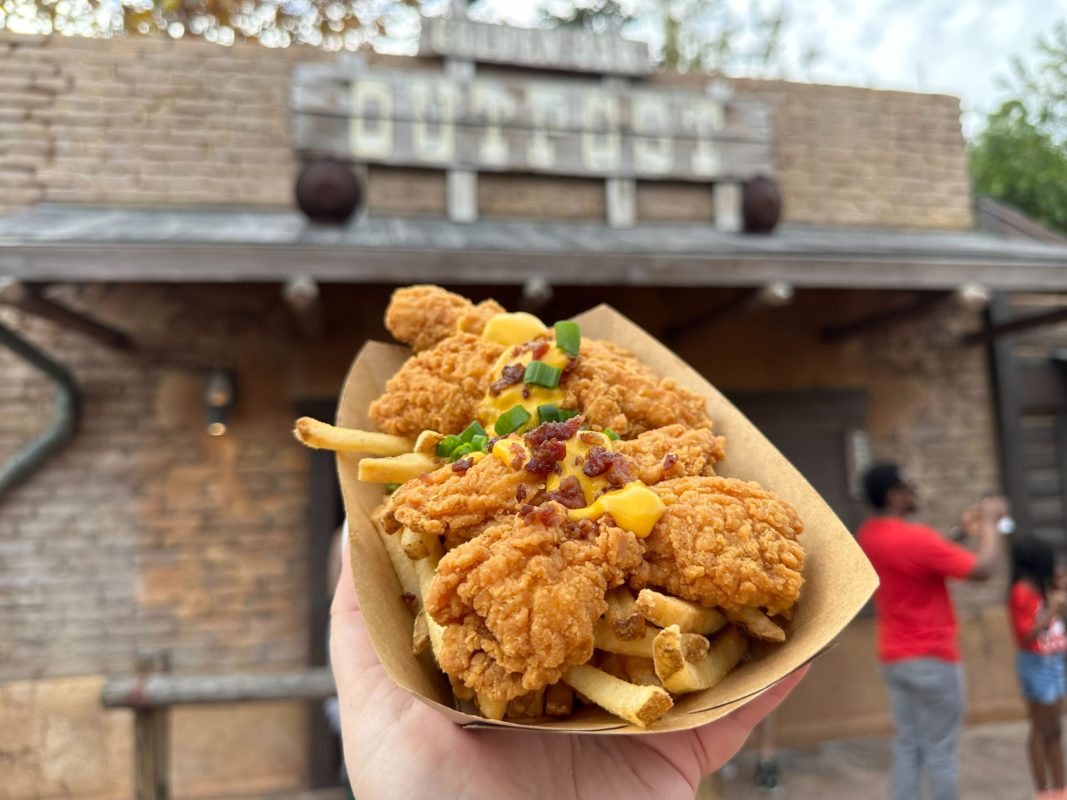 Golden Oak Outpost also has a new 50th Anniversary dish — loaded chicken strips. Without a themed name or special feature, we’re not really sure how these tie into the 50th, but we tried them anyway.

Just steps away from Splash Mountain, the Golden Oak Outpost is serving a new dish in celebration of Walt Disney World’s 50th Anniversary, as the grand finale begins no less. Though its contribution to the celebration isn’t exactly awe-inspiring, these loaded chicken strips fit right in with this Old West-style quick-service counter.

While chicken strips can be enjoyed from just about anywhere in Magic Kingdom, it’s the “loaded” toppings that are meant to set this helping apart. Four fairly large chicken strips are served on a bed of french fries and topped with cheese sauce, bacon, and green onions. These combos aren’t exactly groundbreaking, but the loaded chicken strips offer a little spin on the otherwise common offering.

The cheddar cheese sauce was nice and warm, but we couldn’t help but wish we had more of it to dip our chicken and fries. The saltiness of the real bacon crumbles made for a really tasty topping. It seems by the sprinkling in the center though, that the bacon and, of course, the fresh green onion are meant only as a garnish rather than a more comprehensive part of the dish.

Getting those few bites in the center, the chicken tenders are complemented well by the cheesy, salty toppings. Next time, we’ll definitely ask for extra cheese for proper dipping and to give those french fries at the bottom of the paper boat a little love, as well. The price makes the Loaded Chicken Strips a fair deal and overall, it’s hard to go wrong, especially if chicken tenders are a main food group for any of the kiddos in your group. But we’re left wanting just a little more.

The Loaded Chicken Strips replace the Pecos Pico Tenders previously offered at Golden Oak Outpost for the Walt Disney World 50th Anniversary. They are now joined by Walt’s Chili Cheese Fries, which can be found at several other venues around the park. At Sleepy Hollow Refreshments, the newest Haunted Mansion-themed Chilling Chamber Pop featuring The Mayor is also among the latest snacks in the final wave of offerings for the 50th Anniversary.

Will you try these new chicken tenders from Golden Oak Outpost? Let us know in the comments below!