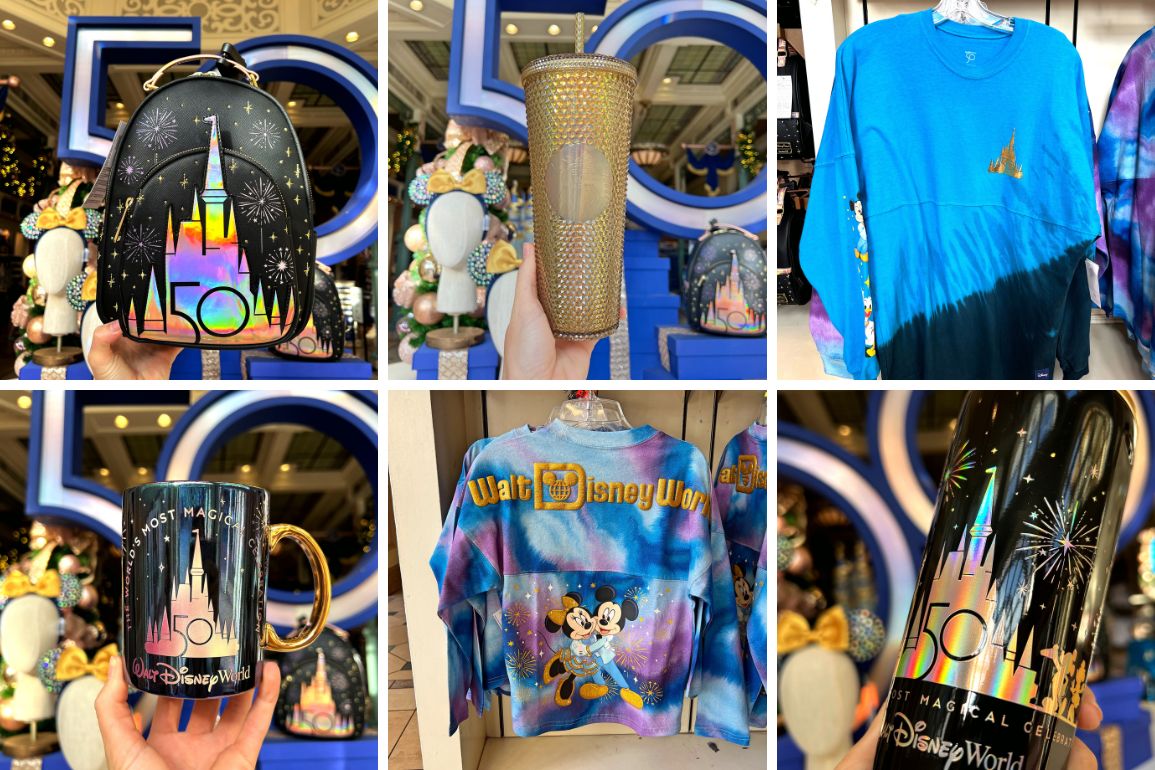 Disney has released its Walt Disney World 50th anniversary Grand Finale merchandise, which we found at the Emporium on Main Street, U.S.A. at the Magic Kingdom. You can also find much of this merchandise on shopDisney.com.

This mini Walt Disney World x Loungefly backpack, made from simulated leather, has a colorful Cinderella Castle set against a black backdrop with bursting fireworks.

The first of two zippered pockets are found on the front of the mini backpack. It’s roomy enough to store frequently used items like sunglasses, keys, a wallet, or other small items.

The front of the backpack features a design of puff paint fireworks in shades of purple and pink, set against a dark sky with gold metallic embroidered stars. The fireworks are displayed in different sizes.

The front of the backpack features a prominent image of a Cinderella Castle in iridescent colors. The number “50” is displayed in black on the front of the castle. The castle image has a patch-like appearance, with the top of the castle’s spires extending above the front pocket for a 3-D effect.

The backpack has two small pockets, one on each side, which both feature a design of twinkling stars. On one of the pockets, a Disney Parks x Loungefly plate is located at the bottom. The pockets are accented with a splash of rainbow colors at the top.

These side pockets are perfect for easily accessing small items. Each zippered pocket has gold tone finish hardware.

The padded handle of the backpack carries the colorful iridescent theme with a shiny pink carrying handle.

The spacious main compartment is fully lined with various colorful patterns from around the Walt Disney World Resort including attractions and characters and twinkling stars.

The back is solid black with two adjustable shoulder straps and an adjustable waist strap. All the straps feature gold-toned hardware.

A bas relief of the Starbucks logo is found on one side of this cold beverage tumbler.

The other side has the Walt Disney World 50th Anniversary logo with Cinderella Castle in the “0” and “The World’s Most Magical Celebration” tagline beneath it.

The lid is a screw on and comes with a coordinating molded straw with a ring at the bottom so it won’t fall out. As with all new items, it is recommended that it be washed thoroughly before first use. This tumbler should be hand washed only as it is not dishwasher or microwave safe. It is made from acrylic, is 9” H x 4” Diameter (11 1/2” H with straw), and holds 24 oz.

On the upper left chest is a glimmering gold-toned image of Cinderella Castle with “50” on the front of the castle in puffy ink.

This spirit jersey has drop shoulders and features a golden foil Walt Disney World logo across the back shoulders. The tie-dye effect continues on the back.

The jersey has a pieced yoke, long sleeves, a ribbed crew neck and cuffs, and a shirttail hem.

The screen art on one sleeve features Pluto and Goofy surrounded by golden stars.

Mickey Mouse and Donald Duck, also surrounded by golden stars, are found on the opposite sleeve.

The inside of the spirit jersey is tagless and is made from a 100% cotton medium-weight material.

A woven spirit jersey label is found on the side hem.

Set against a black background, varying fireworks and stars encircle the mug.

The back of the mug features silhouettes – in ombré shades of cream to purple, of various characters and park attractions in the shape of Cinderella Castle in an iridescent metallic finish.

This mug can be used for hot and cold beverages. However, due to the metallic finish, it should only be hand-washed. It is not microwave or dishwasher-safe. Walt Disney World 50th anniversary grand finale mug measures 4 1/2” H x 3 1/2” D and holds approx. 16 oz.

This stainless steel travel tumbler by Corkcicle, celebrating the 50th anniversary of Walt Disney World, has a black finish with an iridescent Walt Disney World 50th Anniversary logo and character silhouettes on the front. It is the perfect grand finale to mark the occasion.

A parade of characters flanks Cinderella Castle. One one side are silhouettes of Goofy, Daisy Duck, and Donald Duck in shades of green, blue, purple and pink.

On one side the Disney x Corkcicle logo, in ombré is set against a black finish.

On the opposite side of Cinderella Castle Mickey Mouse, Minnie Mouse, and Pluto are in varying shades of pink.

The top of the mug features a golden press on, spill-free lid with a sliding sipper closure.

A large silhouette of Cinderella Castle anchors the front of the mug with “The Most Magical Celebration – Walt Disney World” below. Fireworks and stars are found throughout the sky.

The stainless steel tumbler is not microwave or dishwasher-safe. Hand washing is recommended. It measures 7” H x 3 1/2” Diameter and holds approx. 16 oz.

On the upper front chest is a golden puffy, 3-D design of Cinderella Castle with “Walt Disney World 50” below.

The highly designed back of the spirit jersey has a puffy, 3D “Walt Disney World” across the upper shoulders and Mickey Mouse and Minnie Mouse, in their 50th anniversary attire. Golden fireworks and white and gold twinkling stars surround them.

As with the adult version, the jersey has a pieced yoke, long sleeves, a ribbed crew neck and cuffs, and a shirttail hem.

Although the holidays may be over, this spinner ornament will be a perfect addition to next year’s decor. One side of the spinner features the Walt Disney World 50th anniversary logo with Cinderella Castle in an iridescent metal. The castle is set against a dark blue background surrounded by fireworks and stars.

On the opposite side is Mickey and Minnie Mouse in their 50th anniversary finery against a dark blue backdrop and fireworks. Minnie has a multi-layered dress with glittering shoes and a bow. Mickey has a white jacket with blue pants, as well as glittering gold shoes.

The medallion in the center spins manually. The outer rim features a bas-relief of Walt Disney World attraction icons from the various theme parks. A white satin ribbon is for hanging. The ornament measures 4″ in diameter and is part of the Walt Disney World 50th Anniversary Celebration Collection and Disney Sketchbook Ornament Collection.

The fireworks pattern continues on the back of Mickey and is even found on his tail. He measures 14″ high.

Check out our reporting on other Walt Disney World 50th anniversary merchandise:

Regular Version of Guardians of the Galaxy: Cosmic Rewind Returns After Extended Holiday Overlay at EPCOT