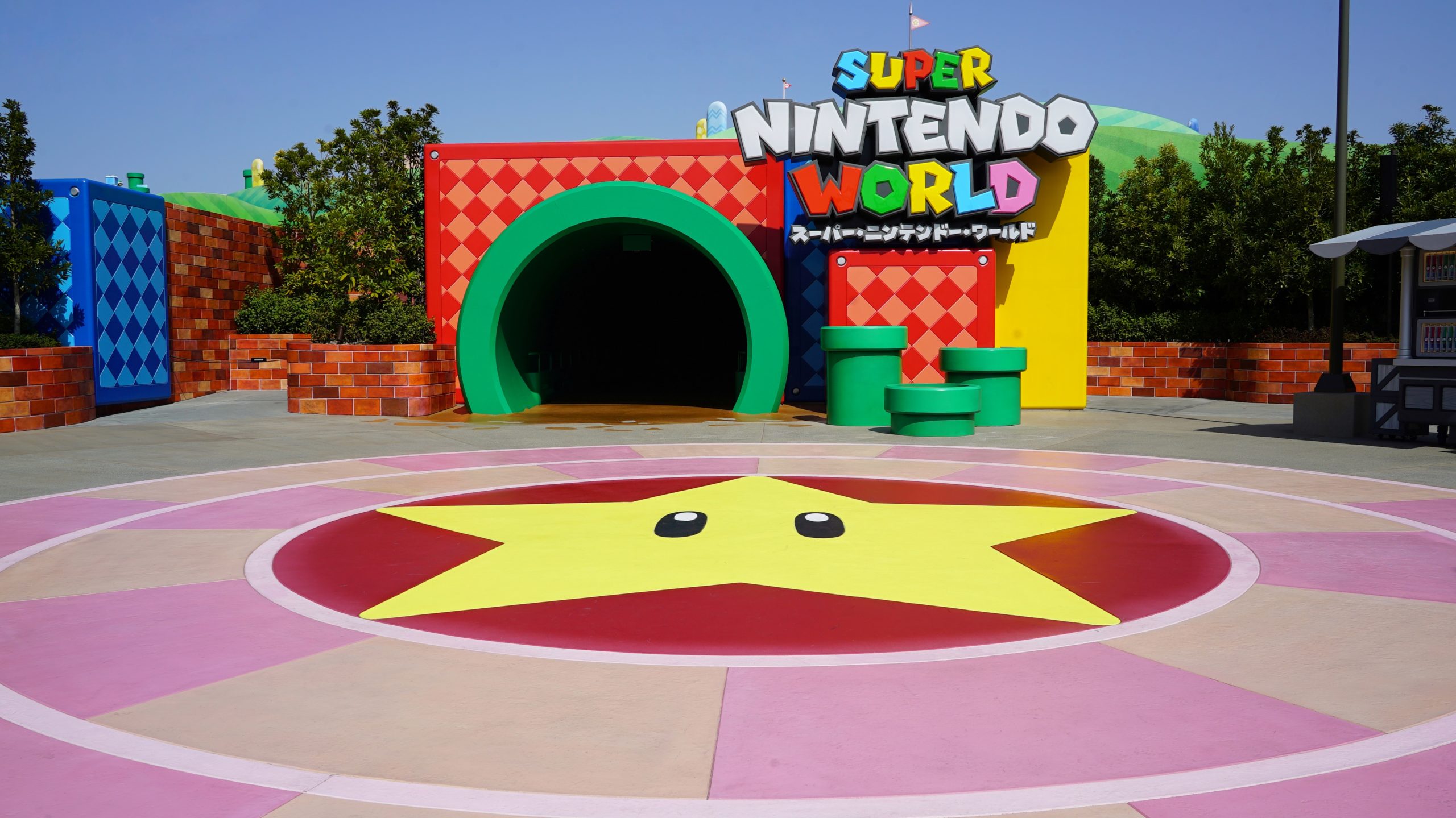 While there’s still a month or so until Super Nintendo World opens at Universal Studios Hollywood, we have been lucky enough to visit the original version of the land at Universal Studios Japan. You can watch Tom’s honest review below, or keep scrolling for more details, specific videos, and thoughts.

For more information about the land, read our full guide to Super Nintendo World.

The entrance to Super Nintendo World in Universal Studios Japan is a long, winding pathway leading past the Jaws ride. The actual sidewalk is embedded with easter eggs, including coins and dates of significant Mario releases. It’s a great way to build hype for the land, so we were extra excited to step inside by the time we reached the giant warp pipe.

Because wheelchairs, ECVs, and strollers seem to be used less in Japan than in the US, we expect the Hollywood and Florida versions of Super Nintendo World won’t utilize levels as much. There are two elevators in Japan, but they aren’t in central locations.

The layout is weird and we did feel there were some crowd flow problems in tight areas that will hopefully be fixed in the other versions.

Super Nintendo World is one of the most literally immersive lands at any theme park. Entering through the warp pipe is akin to entering through the brick wall to Diagon Alley at Universal Studios Florida, meaning it’s crafted to take you completely out of the rest of the park and into this special area. The effect is slightly better achieved with the pipe in Super Nintendo World than with the Diagon Alley walls. The entire land maintains the immersion, with a few exceptions where other areas of the park are just barely visible.

The scenic design of the land is awe-inspiring. After entering, we were particularly struck immediately by the land’s motion. Coins are spinning, Yoshi is circling a tree, Koopa Troopas are walking around, Piranha Plants are chomping, and clouds are moving. It instantly brings the land to life. You really feel like you have stepped into the magical, fictional Mushroom Kingdom.

Check out our walking tour of Super Nintendo World:

With Power-Up Bands, guests can play games throughout the land and get achievements within an app. There are a ton of achievements, so even if you visit regularly, it will take a while to get them all, which is great to keep you entertained on repeat visits.

One fun interaction with the bands is you can smash a rubber pad on the bottom of yellow ? blocks that are within reach, which tells your band you are collecting coins. The five key challenges, which are more intensive activities, do develop queues, which is only a problem because the lines spill into pathways that weren’t designed to have queues.

You can watch videos of the key challenges below:

The key challenges lead guests to a fight with Bowser Jr. that we would consider the land’s third attraction. Overall, it’s a real step up from Sorcerers of the Magic Kingdom, interactive wands at The Wizarding World of Harry Potter, and similar land interaction experiences. The best part of Sorcerers of the Magic Kingdom was the actual game aspect and collecting achievements, while The Wizarding World of Harry Potter is rewarding because there are real physical objects moving. Super Nintendo World takes both of those principles, with physical objects responding to you and in-app achievements, making it the best of both worlds.

You can watch the Bowser Jr. Shadow Showdown game above.

It is an upcharge experience because the bands are $40, but we think it’s worth it. And the bands do come into play on the two rides. Ultimately, the physical land and the Power-Up Band challenges are the best part of Super Nintendo World.

The immersion continues in the Mario Kart queue, which is one of the best attraction queues we’ve ever experienced. Guests pass by a giant Bowser statue and through a cartoon-ish MKTV studio. The latter is not a highly themed room, but it’s a fun reference and includes Mario Kart sound effects coming from the MKTV truck. The rest of the queue continues through Bowser’s castle, with the rest of the rooms being very detailed and including many moving elements.

Guests then get a pre-show briefing about the ride, similar to what you would watch before playing Mario Kart at home. There is a lot to know before boarding, since the ride is so interactive, and there is a learning curve. Of course, it was all in Japanese but there were English subtitles for those of us who don’t speak the language.

You then receive the Mario cap headset that lets you experience the augmented reality. Our recommendation is to wear it as far down on your forehead as possible for the AR to align in your view correctly. It’s not the most graceful tech, but it works well enough and wasn’t uncomfortable.

The load area is just as gorgeous as the rest of the castle and the ride vehicles are unique since they do look like karts from the game. After boarding, you need to tap your Power-Up Band on the steering wheel so it knows you’re playing and you can get your achievements. You also then attach a visor to the headset.

There’s a training sequence at the beginning that isn’t necessarily indicative of the rest of the ride but it gives you a moment to get used to the shooting system, which isn’t very intuitive. The triggers for your weapons are on the steering wheel in front of you, while you aim with your head. So sometimes you need to look in a different direction than where your steering wheel is pointed to shoot something. It takes one or two rides to get it down, which is a big ask for non-local guests who may not get to ride it multiple times.

You also turn (drift) the car, but you don’t have complete control over it like in an actual Mario Kart game. It’s still a slow-speed dark ride.

As for the AR, it doesn’t look as good as we were hoping. It’s difficult to film but our POV video is not that far off from the actual look. And ultimately, combined with the gaming elements, the AR distracts from the actual ride, which takes you through some gorgeous full-size sets that you aren’t able to appreciate. While the Power-Up Bands improve upon land interactivity, Mario Kart: Koopa’s Challenge is an overcomplicated version of shooting rides like MEN IN BLACK Alien Attack and Toy Story Mania.

You can watch that POV video below:

It’s ultimately a failure. It’s too much for one ride and doesn’t capture the magic of actual Mario Kart. We think it could be fixed with animatronics in the sets and losing or paring down the AR element. But either way, it’s not the E-ticket attraction that Nintendo fans are expecting. And it’s a letdown after the incredible land and queue.

We did try to take off our headset to experience the regular dark hide behind the AR but got told off but Crew Members. This may be different when the ride comes to the U.S. as Japanese theme parks are much more strict with their rules.

In Universal Studios Hollywood and presumably other iterations, this attraction will be called Mario Kart: Bowser’s Challenge.

The queue of Yoshi’s Adventure isn’t as stunning as the Mario Kart one, but it’s still beautiful and spacious. It matches the aesthetic of Yoshi games, which is a little softer and more childish than Mario games. But be warned — if the line stretches over 45 minutes or so, you’ll be directed to a thin and incredibly unthemed space between the Mario Kart show building and the Donkey Kong construction site. And that happens almost every day.

This is a continuously loading omnimover ride. It has a convoluted restraint system that seems to be the same one used on The Secret Life of Pets: Off the Leash in Universal Studios Hollywood. This is unfortunate because these restraints do prevent larger/taller guests from riding comfortably or riding at all. Mario Kart is also restrictive, but not as bad, which is a shame and could be an issue when Super Nintendo World comes to the U.S. Yoshi’s Adventure won’t be at Universal Studios Hollywood, but it will be in Epic Universe at Universal Orlando Resort.

Yoshi’s Adventure is like the PeopleMover or The High in the Sky Seuss Trolley Train Ride in that it lets guests leisurely view the land from above. But it’s significantly shorter than either of those attractions and doesn’t circle very much of the land.

It only goes through one room, which is essentially a beautiful store window display. There are some moving elements, but there’s not a lot of space, so they just bob up and down a bit. We did love seeing Poochy in this room, though.

It’s technically interactive. There is a console in front of you with three different Yoshi egg buttons. When you spot the eggs during the ride, you hit the corresponding button and get your achievement via your Power-Up Band.

Yoshi’s Adventure is a fine ride but nothing special and it’s too short to justify a sometimes hour-long wait time.

You can watch the full ride and tour the queue above.

Kinopio’s Cafe, which will be called Toadstool Cafe in Universal Studios Hollywood, is the main dining location. We love the food here, both in taste and presentation. We had a sort of pizza soup that came in a mug with a mushroom cap piece of bread on top. The mushroom soup is to die for and, of course, comes in a mushroom mug. We loved finally getting our Princess Peach cake. Read our original Kinopio’s Cafe review or watch the video below to learn more.

There’s a popcorn kiosk just outside of Mario Kart. We tried the mushroom cream popcorn on this visit and it’s amazing. Read our full review or watch it below!

Yoshi’s Snack Island also has delicious food and drinks. Read our review or watch below to learn more.

When the land is translated to the U.S., we expect a lot of the food to be different, but hopefully, the fun presentations will stick around.

Finally, the merchandise is a big success. The 1-Up Factory is huge and packed full of cool stuff. The merchandise team did a great job. Check out our full tour from the shop’s opening.

The land’s visuals, Power-Up Band activities, food, and merchandise are all phenomenal. In many ways, they completely change the theme park game. The land’s design has a few weak spots, but it’s the rides that were really disappointing.

If you’re visiting Universal Studios Japan, you can of course read our full guide to Super Nintendo World to learn even more about everything in the land! And if you’ve already gone, let us know what you thought in the comments below.