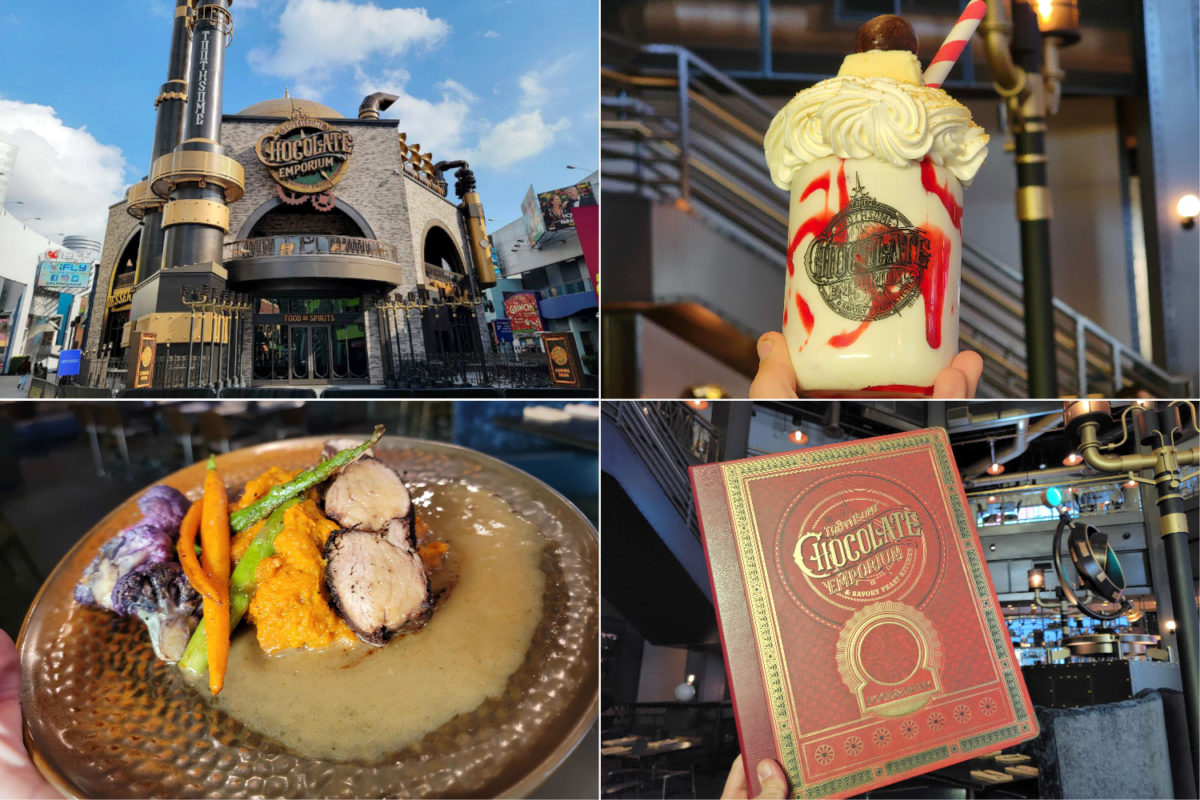 Toothsome Chocolate Emporium & Savory Feast Kitchen is finally opening its third full-size outlet at Universal Studios Hollywood, following locations in Orlando and Beijing, so we decided to stop in during its soft open phase to give things a taste and see how they hold up! This is a rather unique experience and there’s a lot to take in, so let’s get started.

The West Coast version of Toothsome began construction in 2020, with this being the former home of the Hard Rock Cafe from 1996 to 2020. The exterior has a faux brick facade with steampunk touches like gears, pipes, and a tall cooling tower outside the front. The color scheme is mostly black and gold.

Stepping inside, we’re greeted with a similar steampunk vibe, down to the employees’ costumes. Black and gold are the primary colors throughout, with white accents to set them apart. Straight ahead after entering is the two-story dining area.

To the right is the gift shop, which sells take-home treats and some souvenirs.

Off to the left is outdoor seating and access to the milkshake bar.

The menu is quite nicely housed in this pleather book with the restaurant’s logo emblazoned on the front.

The first page describes the story of the Toothsome Chocolate Emporium and its founder, as follows:

Jacques landed the dirigible in front of a small cottage home in London, England.  Professor Doctor Penelope Tibeaux-Tinker Toothsome was overjoyed to share her experiences and experiments with her family.

She quickly stepped from the cockpit of the airship and dashed up the cobble pathway.  She threw open the front door, soaking in her childhood home.

Except…It was empty.  All that remained was the old Victrola in the corner of the living room.

Penelope stepped into her mother’s kitchen recalling the first time she ever tasted chocolate.  There was a song in her head.  She couldn’t recall the name of it, but it was French and Jazzy.  There on the kitchen floor was a note from her parents.

Dearest Penelope,   We have set out to join you in your adventures.  Surely the world isn’t so big that we can’t find you.  We shall look for you wherever chocolate can be found.  Love, Thomas & Violette Toothsome

Penelope knew immediately what she had to do.  She would take everything she knew about chocolate and develop a fully industrialized, state-of-the-art chocolate emporium!  Until the day she was reunited with her family, she would share her love and knowledge of chocolate with the world!

With the old Victrola in her arms, Penelope made her way back to the dirigible.  Jacques quickly lifted them into the air.  They were off to chase their destiny and find the perfect location for the worlds foremost chocolate emporium.  There would still be discoveries to be made, but she was determined to make them all.

That is the story of Professor Doctor Penelope Tibeaux-Tinker Toothsome.

Or at least… so I’ve been told.

Plenty of cocktails, beers, wines, and spirits are available to complement your meal.

Available items on offer for appetizers include the chocolate almond bread or the coffee and chocolate stout wings.

Soups and salads are also available to start.

Pizza options are available as flatbreads, including margherita, BBQ chicken, and pepperoni.

Don’t feel like a burger? Chicken, steak, and ham sandwiches are all available, including a reuben and a croque monsieur.

There’s some pretty massive burgers on the menu here though, including the Tour de France and the May Contain Bacon.

Feeling like pasta? You can get some gnocchi, fettuccine alfredo, or risotto as well.

Steak, chicken, and fish are all on the menu as main entrees as well.

Don’t feel like a shake for dessert? Get a crepe or some waffles instead!

French toast and quiche are quite the contrasts — sweet and savory options!

But of course the highlight of Toothsome is the over-the-top sugar bomb milkshakes, which feature a whopping of toppings!

There’s so many choices, from red velvet to key line, confetti to pineapple upside down, it’s so hard to choose!

A more traditional experience can also be had through the sundae selection, which can even contain a piece of cake within!

For those who may not want a gigantic diet-crushing milkshake, some more subdued desserts including a chocolate creme brulee and bread pudding are also available.

Kiddos also have some small options in case a monstrous hamburger and huge milkshake would bounce them off the walls too much.

The interior is appointed to the steampunk theme, complete with a huge orb in the center. Light posts very distinctly look like pipes and lanterns.

A fresco hangs above in the dome depicting steampunk-esque travel like hot air balloons, dirigibles, and zeppelins.

There are indeed two stories of seating available.

Guests can also be seated at large booths meant to hold up to six guests at the very center of the first floor, near the orb.

There’s also globes, sketch desks, and the Victrola from the story of the restaurant, all on display.

If all of this sit-down hullabaloo is too much for you, the milkshakes are all available at the milkshake bar to the left of the entrance, as we mentioned.

Ice creams and toppings are all ready to make that perfect sugar rush as you run for Super Nintendo World!

We didn’t get to try the entire menu, so we got a small sampling of what’s on offer here at Toothsome Chocolate Emporium & Savory Feast Kitchen.

This was delicious! The crepe was crispy on the edges and had a wonderful bite to the center — not quite chewy, but soft and dense. The cinnamon apples seem to be a fresher alternative to the traditional apple pie style filling sauce found far too often in dishes like this.

These apples seemed to have more flavor and a bit more structure to them, to an overall better experience. Dehydrated apple chips that adoring the top are crunchy and delicious, bringing another textural element and reinforcing the apple flavor found throughout. Overall, this is one of the best crepes we’ve had in America, and we highly recommend it.

It’s difficult to taste the glaze on the brisket, even when eating on its own and separate from the burger, but that is understandable with brisket that’s shaved so thin. The glaze would have been on the outside of the piece of meat, and having thin-shaved brisket like this means there’s not much of the crust present on the slice.

But that being said, the brisket is still delicious and well done, even without the chocolate glaze it still holds its own in a burger of so many fantastic flavors. Overall, though this wasn’t our very favorite dish from our meal at Toothsome, it’s definitely no slouch and would satisfy any meat lover.

This is nothing less than one of the finest dishes we’ve ever had. Combining the sweet and the savory with deft skill, this sous vide cooked pork loin is rolled in cocoa for a dark and roasty yet sweet flavor. The sherry white chocolate reduction is genuinely unbelievable, in that your mouth has a difficult time believing what is happening to it. The sweetness of the white chocolate and the savory butteriness of the reduction sauce blend together in a new way that we have never experienced in any other dish before.

Generally, sweet and savory go together well on a small scale, like peanut butter and chocolate or salted caramel cookies. But this takes it up a level to a full-on dish that is half sweet, half savory and all delicious.

The roasted vegetables are a welcome addition and provide a nice crunch to the overall plate. And the sweet potato mash helps to further the through line of sweet and savory together. Overall, we can’t say enough good things about this dish. This really is one of the finest plates in all of Los Angeles, and worth the trip up here on its own.

These shakes are what Toothsome is known for. They’re beautiful, and thankfully they’re also as delicious as they look. Sour cream ice cream is odd to read on a menu, and it’s what drew us to this shake. It was so sweet and delicate, and it worked perfectly with the overall flavor of the shake.

This really went to the nth degree to sell the cheesecake aspect of the flavored shake, and while the strawberry sauce that lines the inside of the cup is pleasant, it’s not mixed all the way through. We would have liked a bit more of the strawberry flavor for our strawberry cheesecake, but as it stands it was a delicious cheesecake shake, and we can’t be upset about that.

The best part about this shake is the consistency. Milkshakes can often be entirely too thick and hard to drink, or thin and runny on the other end of the spectrum. This one is the perfect consistency all the way through, easy to drink yet hardy and satisfying as a milkshake. No matter what flavor you get, consistency is key and this one is a winner.

Of course to commemorate your visit, you can also stop in at the gift shop.

Plenty of sweet treats are out in display cases and ready to be taken home for yourself or loved ones!

There’s also plenty of prepackaged treats like cotton candy and chocolates on offer.

How about some macarons?

There’s some chocolate sculptures on display in the shop as well, and very ornate ones at that!

They evoke the steampunk nature of Toothsome perfectly.

This raglan hoodie has light blue sleeves and a white center.

The navy shirt features a green and orange version of the logo surrounded by gears.

This small cooling tote is brown with gear silhouettes throughout. The logo sits at the center in gold, with “Universal Studios” written below.

It also has shoulder straps to be worn like a backpack.

A simple brown mug with the gold logo is also available.

All in all, Toothsome Chocolate Emporium & Savory Feast Kitchen is a welcome addition to Universal CityWalk Hollywood, between its excellent entrees and delicious novel milkshakes as well as exquisite theming. We cannot recommend enough that you get a table and stop in on your next visit, you certainly won’t regret it. You can also visit Toothsome at Universal CityWalk in Orlando and Beijing!

How excited are you to dine at Toothsome Chocolate Emporium & Savory Feast Kitchen? Let us know in the comments below!