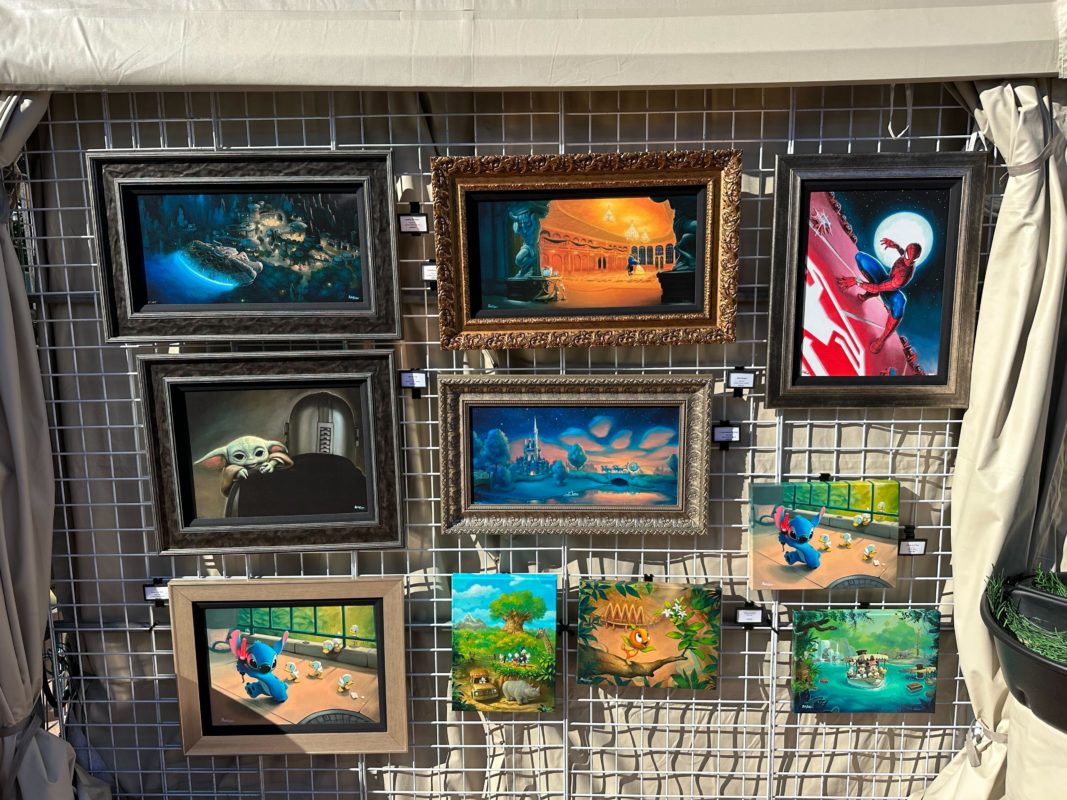 There’s something for everyone at Rob Kaz Art during the 2023 EPCOT International Festival of the Arts. The booth, located near the Canada Pavilion, is home to new works featuring the worlds of the Disney Parks, Star Wars, Marvel, and more!

“Clan of Two” (bottom left of the above photo) depicts Grogu over The Mandalorian’s shoulder (as seen from behind), clutching a knob from the Razor Crest. Grogu appears relaxed, or just pleased he has his favorite toy. The price list is as follows:

All prices come courtesy of Kaz’s Facebook page, and are the same for all the pieces listed below, with the exception of the framed originals.

“Ducks in a Row” (top right of the above photo) pays homage to the ducks seen around Walt Disney World’s theme parks. But here, they have a tour guide, who’s none other than Stitch. Trading mischief for responsibility, Stitch holds a guide light as he leads them safely across an EPCOT pathway, but one duckling seems to be distracted by a stray piece of popcorn. The framed original sells for $5,600.00.

“A Very Special Evening” (top left of the above photo) depicts Cinderella Castle at sunset, about to receive Cinderella in her royal coach. As the daylight fades away in orange and yellow, stars shine in the night sky. The framed original is available for $8,400.00.

“Something There” (center top of the above photo) takes us to the Beast’s castle, as he dances with Belle in the ballroom. In the foreground, Mrs. Potts, Chip, and Lumiere look on. The ballroom serves as the main room of the Be Our Guest restaurant in the Magic Kingdom. This artwork marks Kaz’s first foray into the world of the Disney Princesses in his Disney Parks Art Collection. The framed original costs $8,400.00.

The Orange Bird gets his due in “Think Orange” (top right of the above photo). The painting shows the Orange Bird excitedly looking at orange blossoms that have sprouted on a tree branch. The background shows the former building of Sunshine Tree Terrace, which featured the bird as a mascot for years before retirement in 1986. Orange Bird would eventually return to the Magic Kingdom in 2012. The building is currently home to Aloha Isle, which swapped places with Sunshine Tree Terrace in 2015. The framed original sells for $5,600.00.

Kaz heads to Star Wars: Galaxy’s Edge with “Bright Suns” (center top of the above photo). The early stages of this art could be seen at last year’s festival, and now it’s finally come to completion. Just steps from the Millennium Falcon, Chewbacca meets with BB-8. Behind them, Hondo Ohnaka looks at an X-Wing flying over Black Spire Outpost. The framed original costs $8,400.00.

Following Kaz’s 2022 map of the Magic Kingdom, 2023 brings us “Presenting Disney’s Hollywood Studios” (top left of the above photo). The piece shows a birds-eye view of the park with a film reel making up the compass. Mickey Mouse stands nearby, wearing his director outfit and holding a megaphone. You can take home the framed original for $5,600.00.

Finally, we go west to Avengers Campus in Disney California Adventure (or east to the one at Walt Disney Studios Park) for “Web Slinger” (center top of the above photo). Kaz’s first-ever Marvel piece, the painting depicts Spider-Man on the side of the Worldwide Engineering Brigade building neutralizing a few rogue Spider-Bots, inspired by “WEB SLINGERS: A Spider-Man Adventure.” The framed original costs $5,600.00.

The booth operates daily from festival opening to festival closing. Kaz will also be available for signings during the following schedule:

What Disney Parks locale would you like to see Rob Kaz paint next? Let us know in the comments!