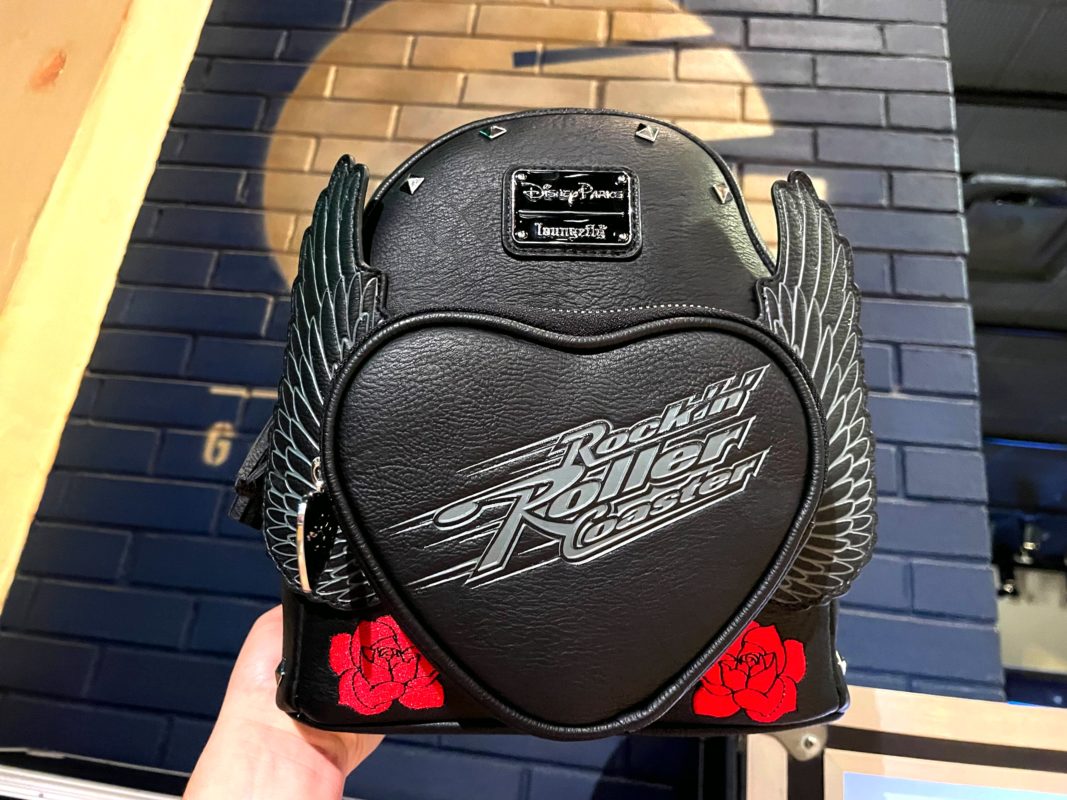 This Rock ‘n’ Roller Coaster Loungefly Backpack has all the hallmarks of a true rocker, including black (simulated) leather, red roses, wings, and silver studs.

The mini backpack has the signature Disney Parks x Loungefly logo on the front top, with four silver square studs arching over the top.

The front outside pocket, which can be seen as either a heart-shaped or guitar pick shape, has the words “Rockin’ Roller Coaster” imprinted in silver in the middle.

The front of the backpack has bright red roses embroidered on the lower left and right sides, outlined in black.

The sides of the backpack are also decorated with three diamond-shaped silver studs on the lower half. The main pocket zipper has simulated black leather tassel pulls and can be opened from either direction.

There are small pockets on either side of the backpack for easy access to small essentials.

This backpack is full of details, like the metal guitar pick pull tab on the front outside pocket.

The inside of the bag is fully lined with red fabric featuring white stars, black roses, and guitar imagery with the words “Rock ‘n’ Roller Coaster.”

The mini backpack has two adjustable straps with silver hardware on the back, as well as a faux black leather handle at the top for easy carrying. It also has its own “license plate” at the bottom of the bag, just like a stretch limo.

The stone-colored “license plate” patch has “RNRC” in the center as the plate identifier. At the top on the upper left and right-hand sides are “DHS” and “1999” for Disney’s Hollywood Studios and the year the attraction opened to the public. In the center, “All Roads Jammed” refers to the announcement that flashes above prior to your limo departing for the concert.

We recently reported that the Rock ‘n’ Roller Coaster Starring Aerosmith will be closed for an unknown period of time, but it is expected to last between three and six months, during the first half of 2023. The attraction will close for refurbishment on February 20, 2023, and is scheduled to reopen in the summer of the same year.

At the time of the report, it was believed that the attraction would undergo some much-needed general maintenance. However, two days later, a woman filed a lawsuit claiming Steven Tyler assaulted her when she was a minor in the 1970s. This latest development may throw a new wrinkle into the planned refurbishment.

Check out some of the other Loungefly bags available at the Walt Disney World Resort:

Is this a “must-have” for your collection? Let us know in the comments below.