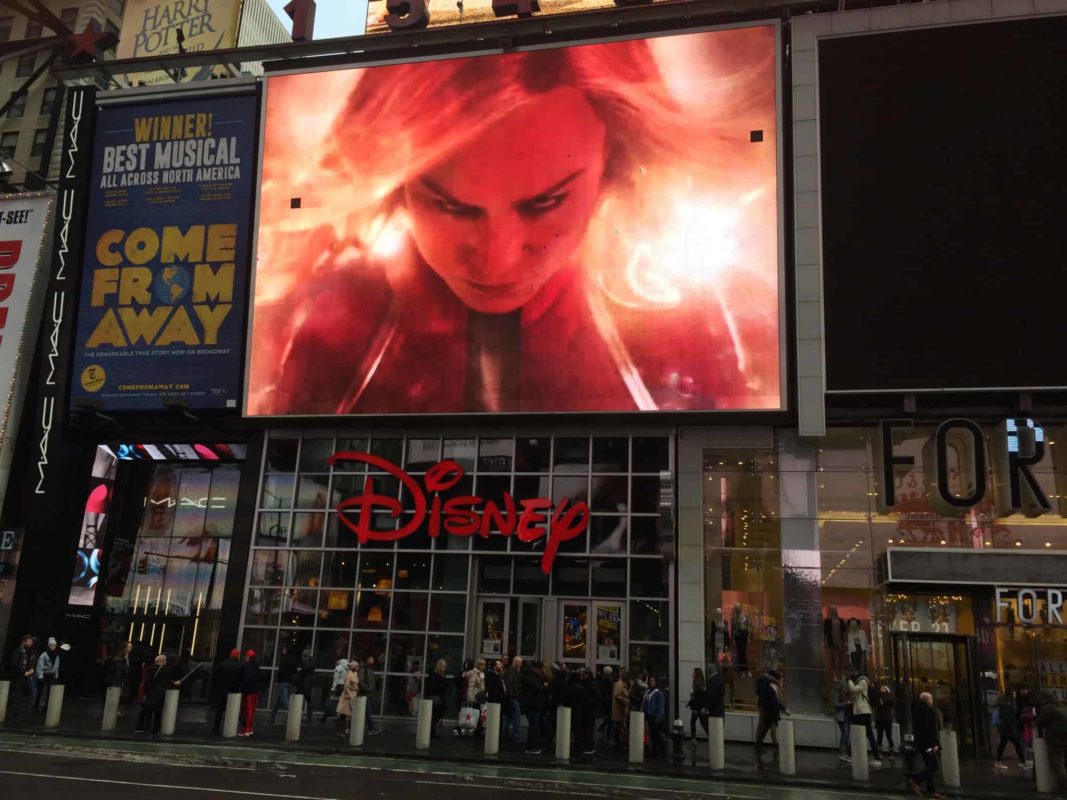 One of the Marvel Cinematic Universe’s most powerful superheroes is about to land in theaters when Captain Marvel releases on March 8th, and to celebrate, a limited-time pop-up experience has flown into the Disney Store in New York City’s Times Square. Being a Marvel fan and willing to brave the large crowds of Times Square, I decided to take a look. 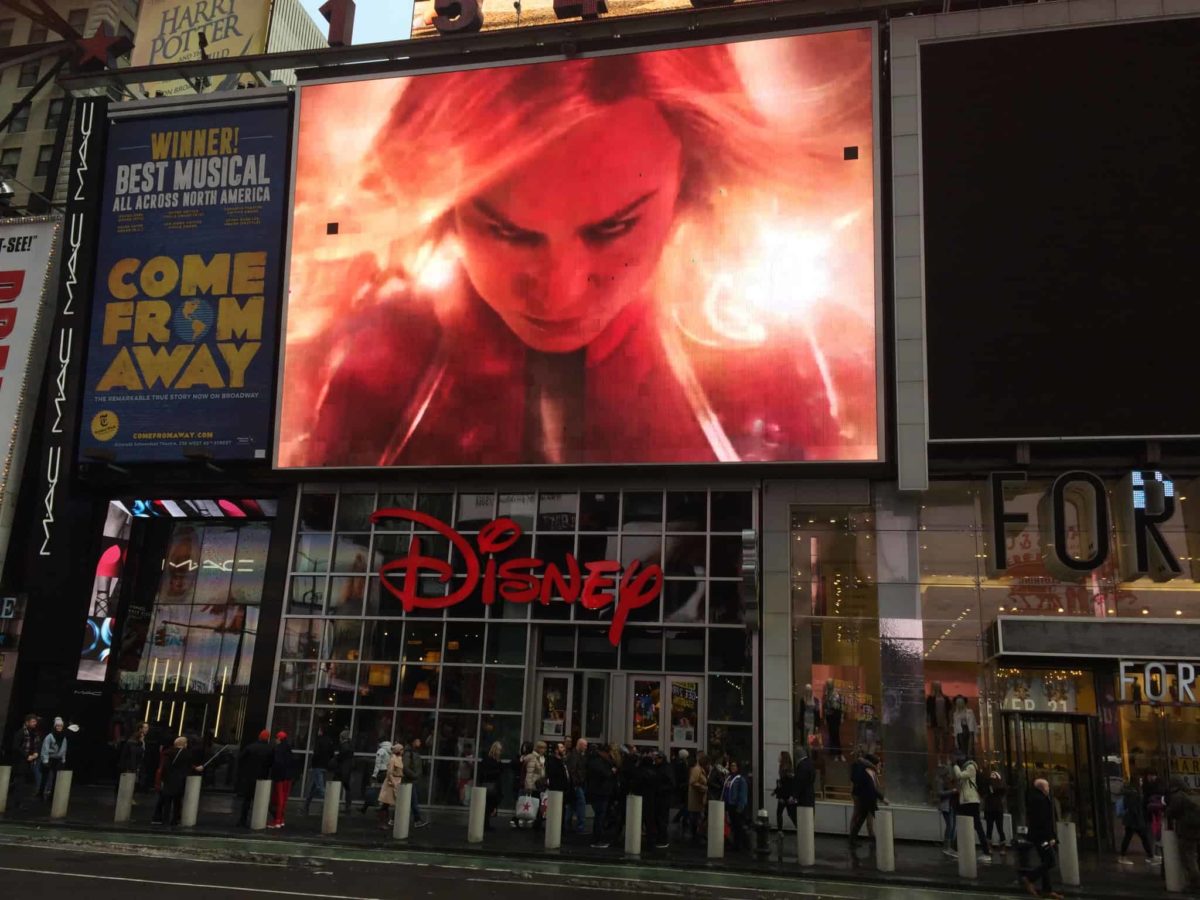 The experience consists of two parts exclusive to the Times Square store: a small display of costumes used in the film, and a Captain Marvel photo opportunity package. So let’s step inside and see what’s going on! (Virtually, that is. Unfortunately, I don’t have the superpower to send everyone to New York City.) 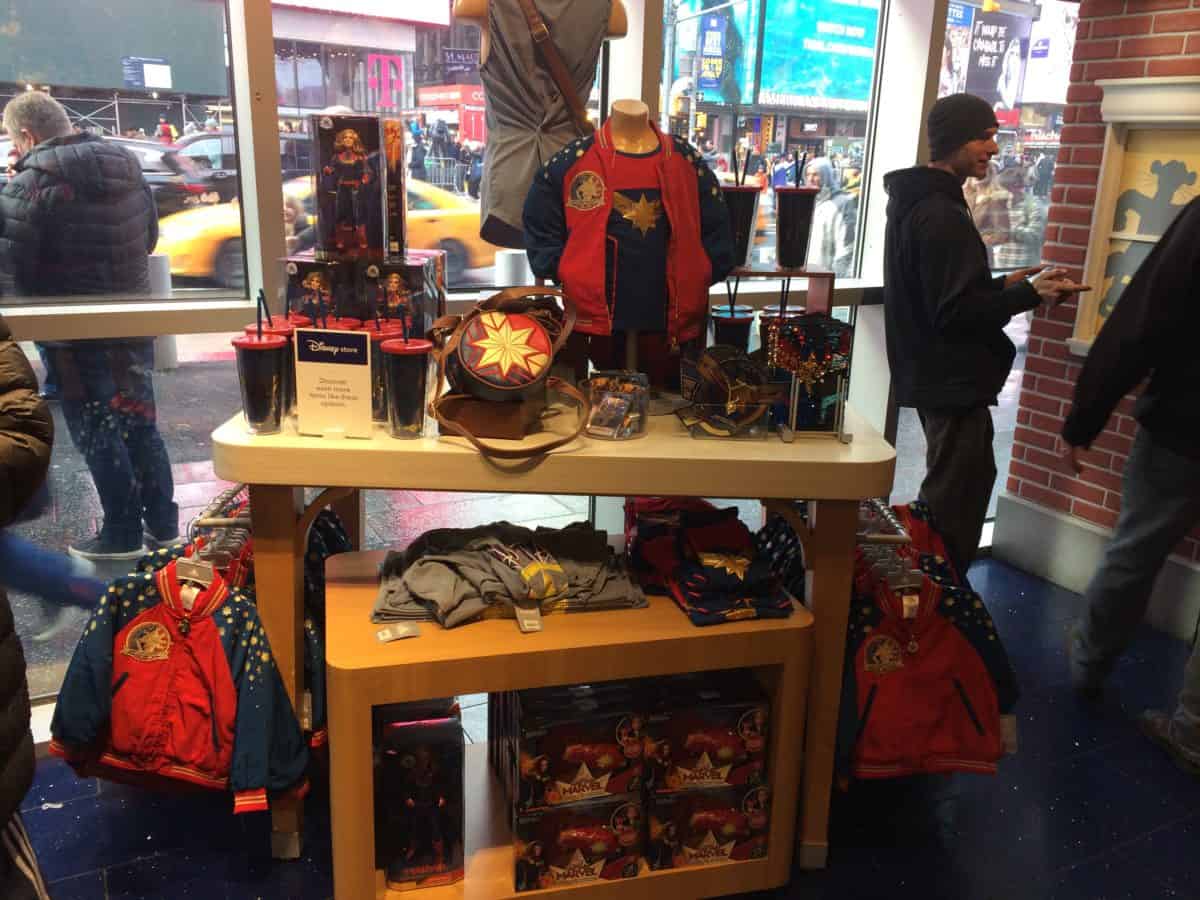 The store’s lower level has a small table of Captain Marvel merchandise, with most of the experience taking place upstairs. Helpful Cast Members are stationed nearby, who gladly direct guests upstairs for the experience. (And more merchandise. This is a Disney Store, after all.) 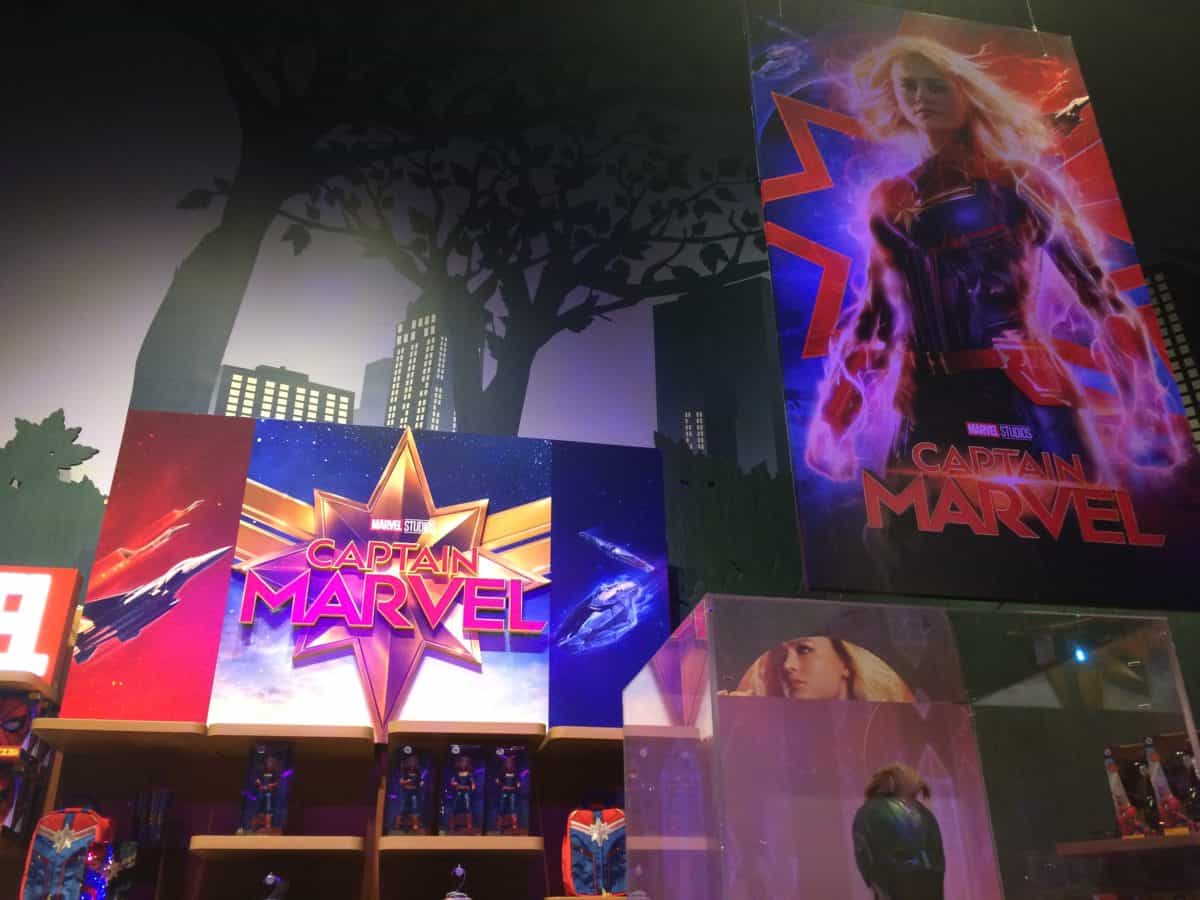 Captain Marvel decor dominates the area, which is typically reserved for Star Wars products in recent years. (Fear not, fans of the Force: the Star Wars section has moved slightly to the left of the Captain Marvel display.) 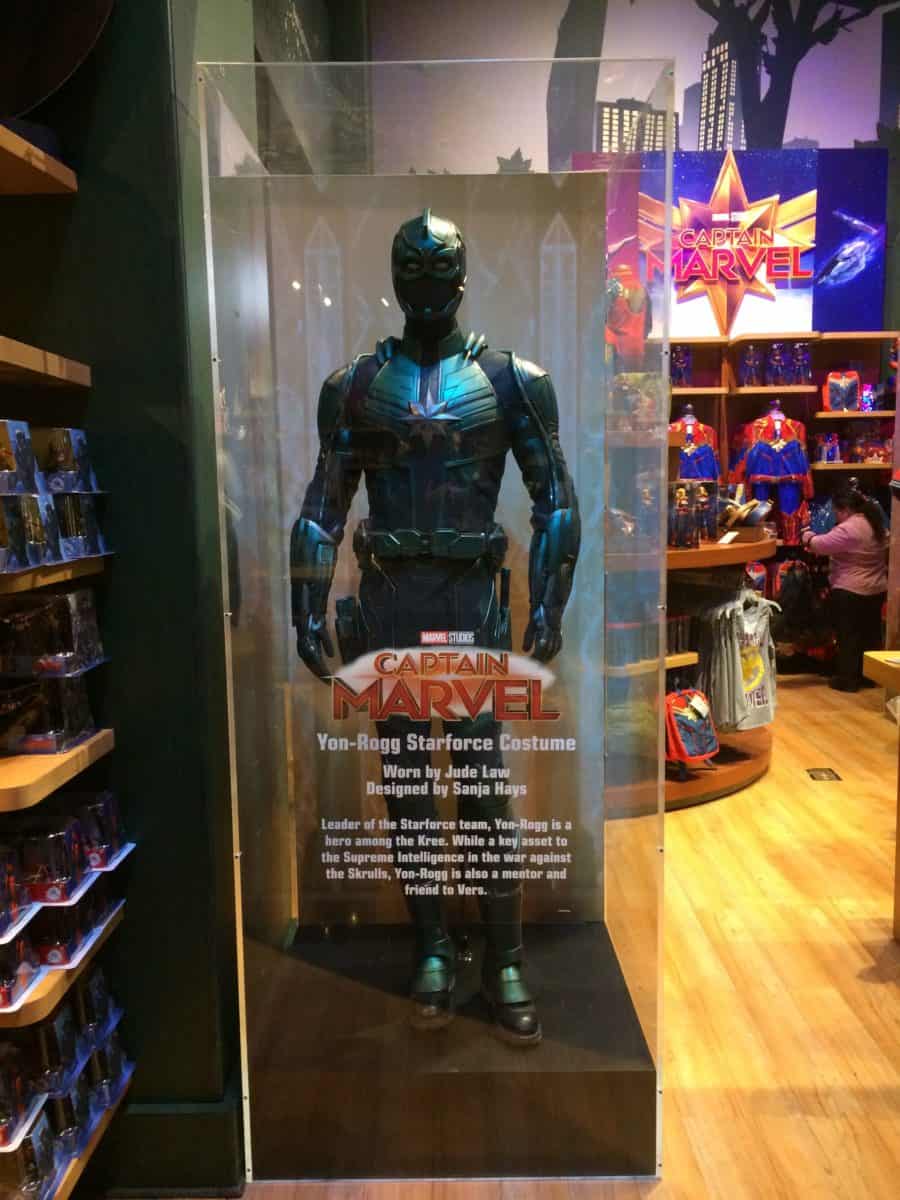 The store has three costumes from the film on display. All three are uniforms from Starforce, the elite Kree squadron that fights an intergalactic war against the Skrulls, and were designed by Sanja Hays. 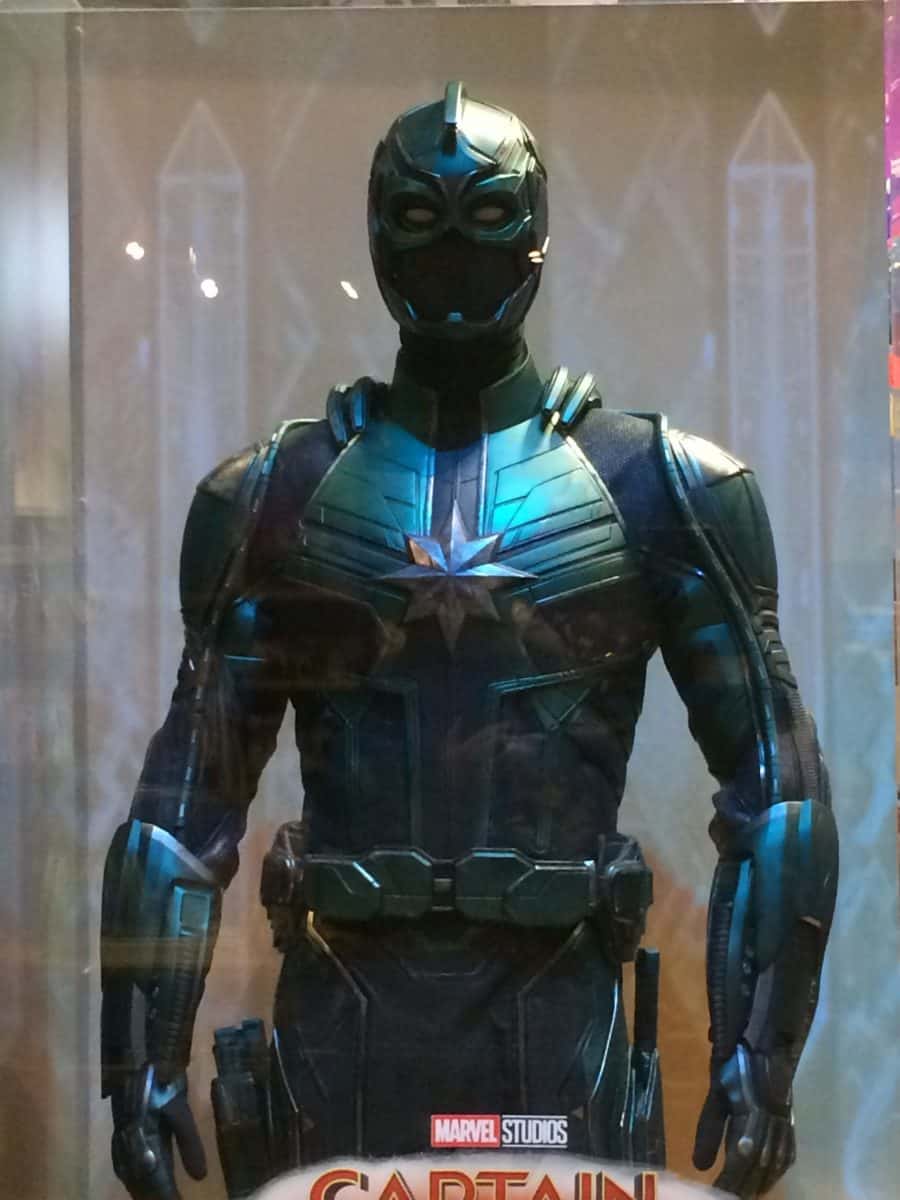 The first costume is from Yon-Rogg, as performed by Jude Law. The description on the display reads: “Leader of the Starforce team, Yon-Rogg is a hero among the Kree. While a key asset to the Supreme Intelligence in the war against the Skrulls, Yon-Rogg is also a mentor and friend to Vers.” 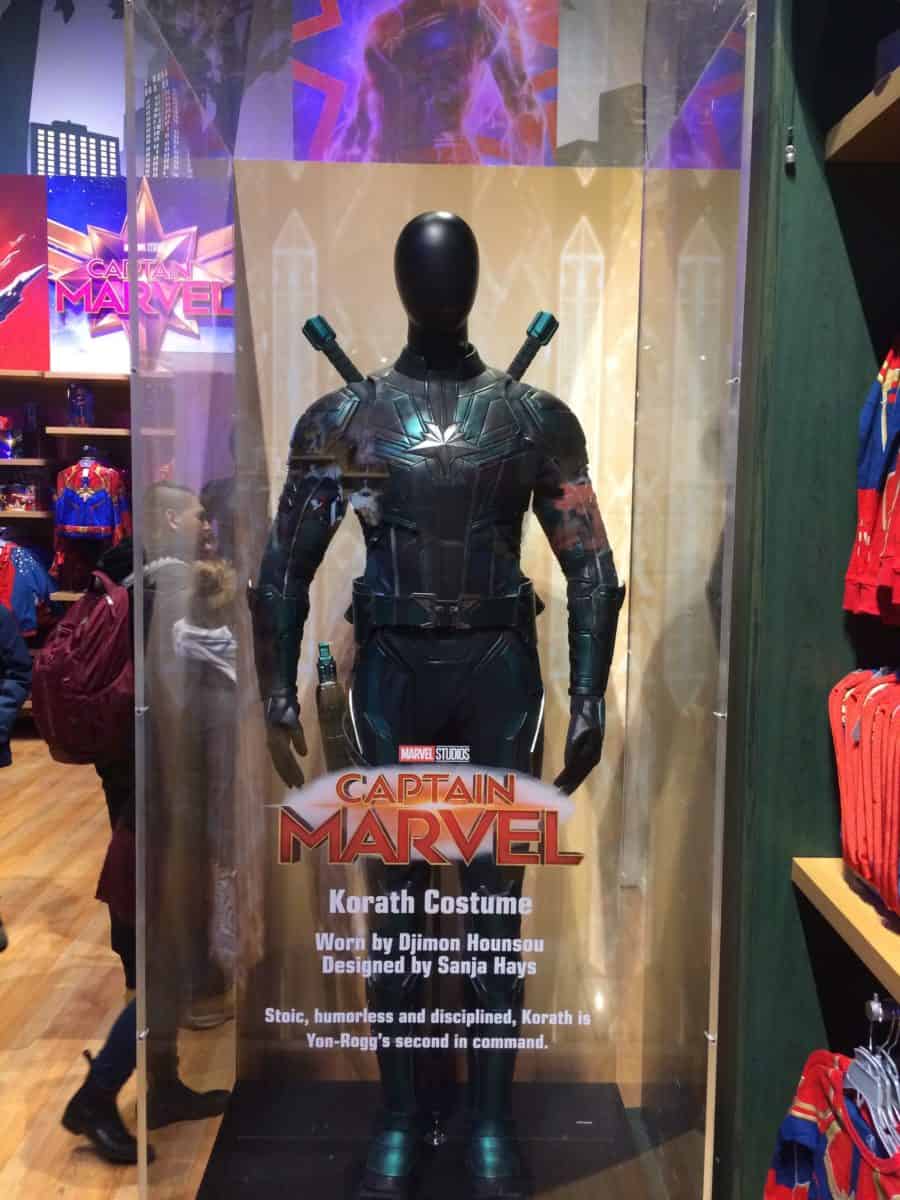 Before he tangled with the Guardians of the Galaxy, Korath was a Starforce member, and one we’ll see more of in Captain Marvel. Djimon Hounsou returns to the role he began in the first Guardians film in 2014. 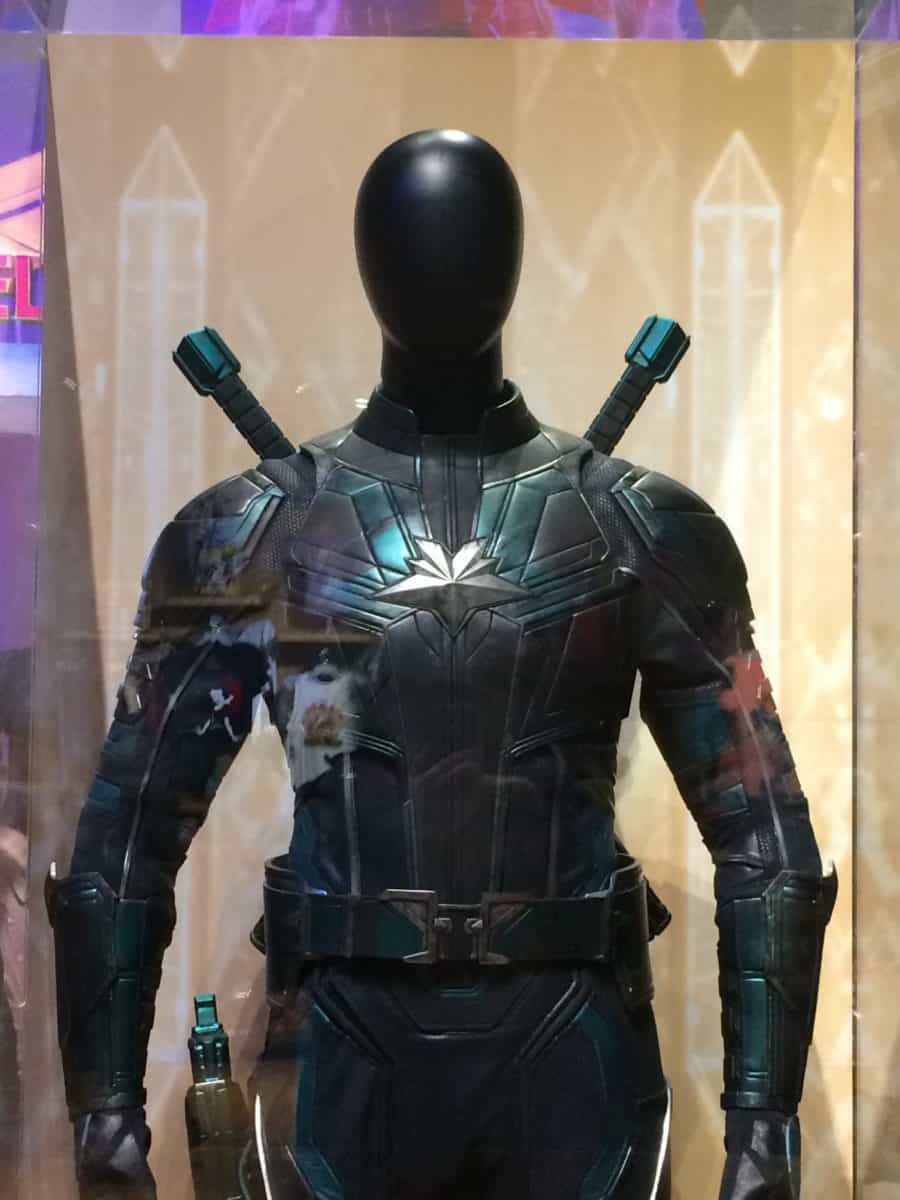 “Stoic, humorless and disciplined, Korath is Yon-Rogg’s second in command.” 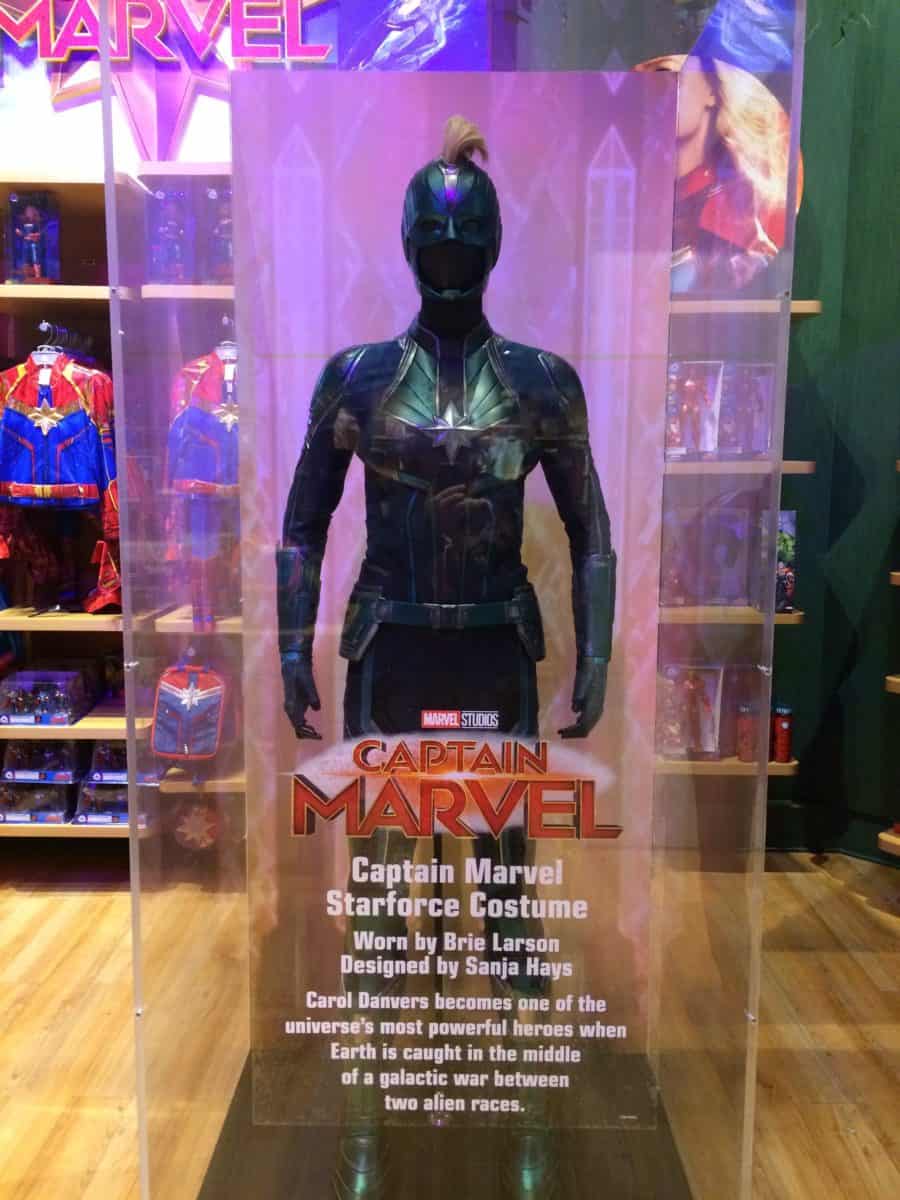 And finally, there’s Captain Marvel herself, a.k.a. Carol Danvers, as performed by Brie Larson. Captain Marvel is Marvel Studios’ first film to have a female superhero as the main protagonist. (And yes, the mohawk was included as part of the costume.) 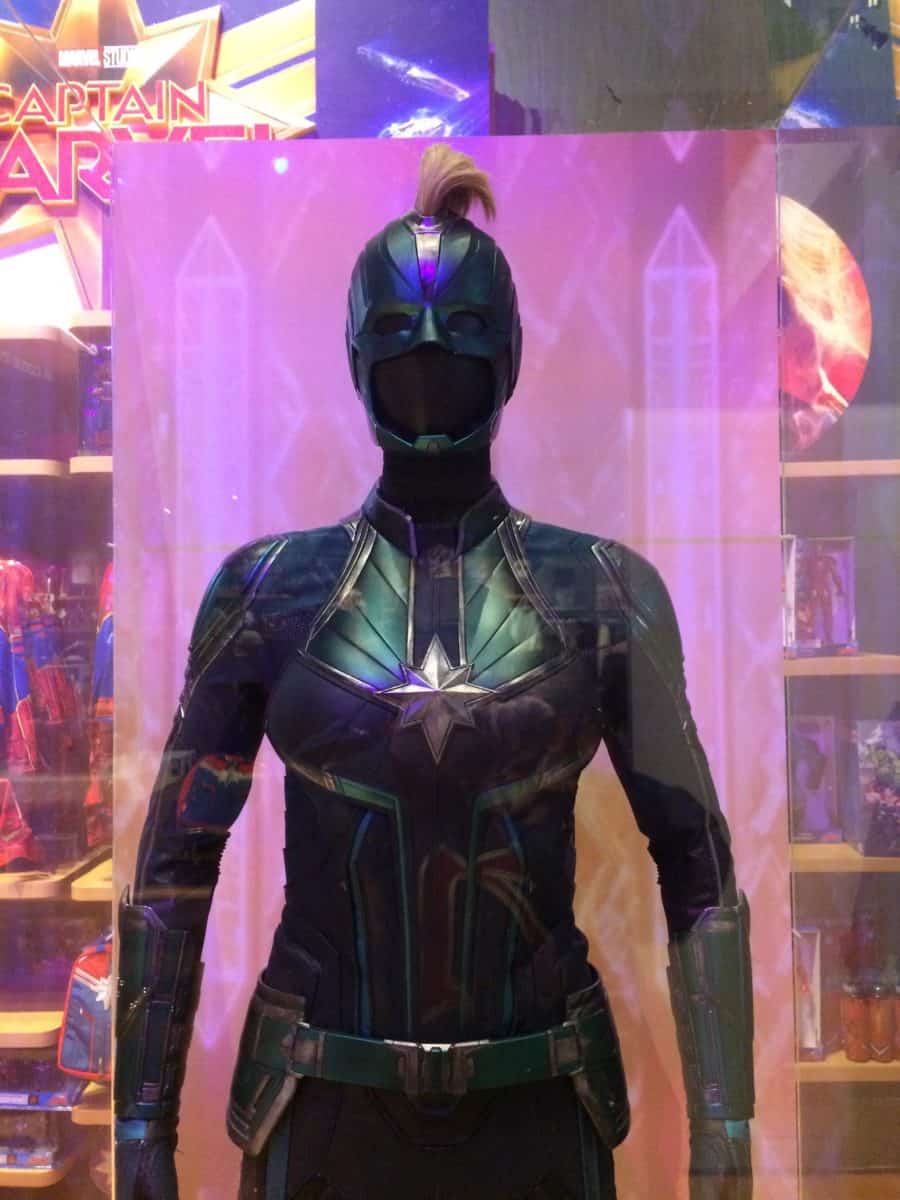 “Carol Danvers becomes one of the universe’s most powerful heroes when Earth is caught in the middle of a galactic war between two alien races.” 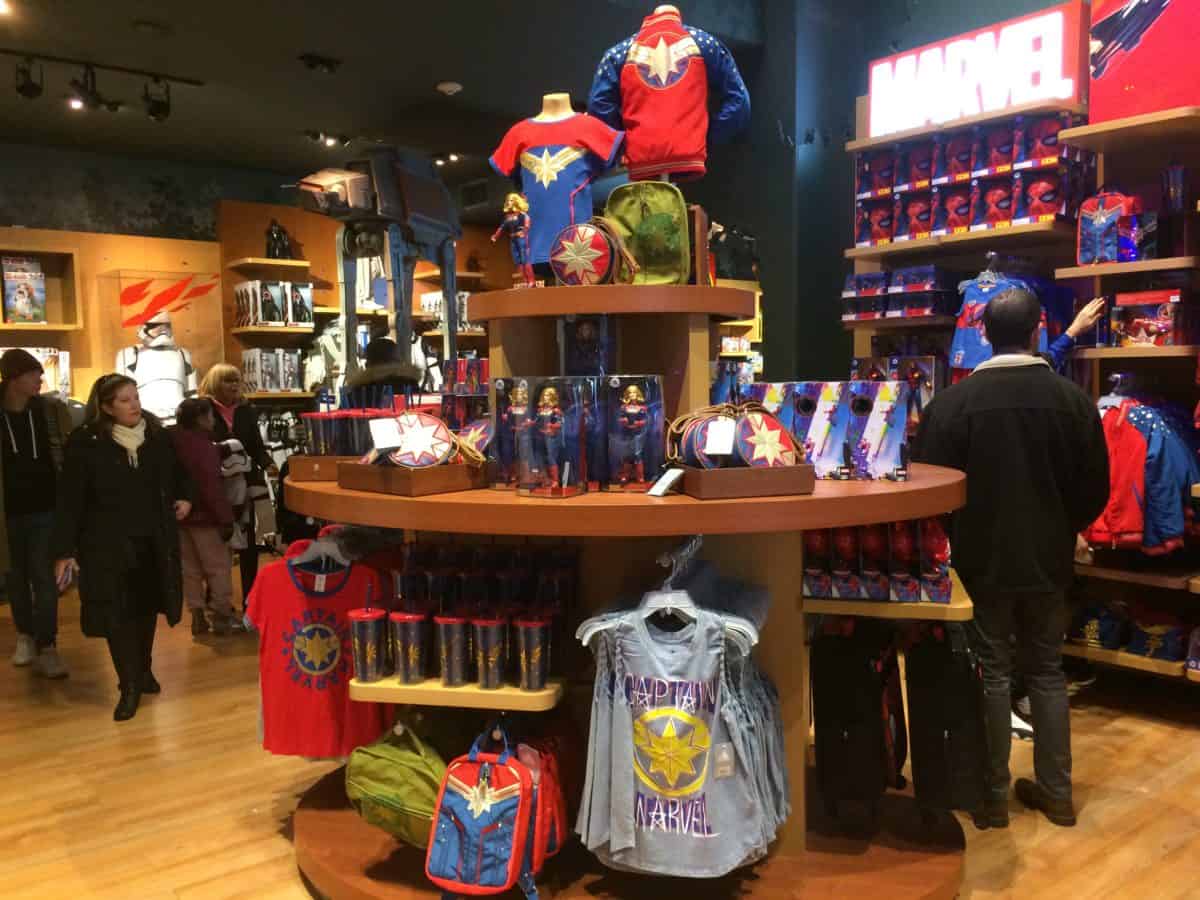 There’s plenty of merchandise to be had, and quite a few enthusiastic fans were snapping up as much gear as they can get their hands on. 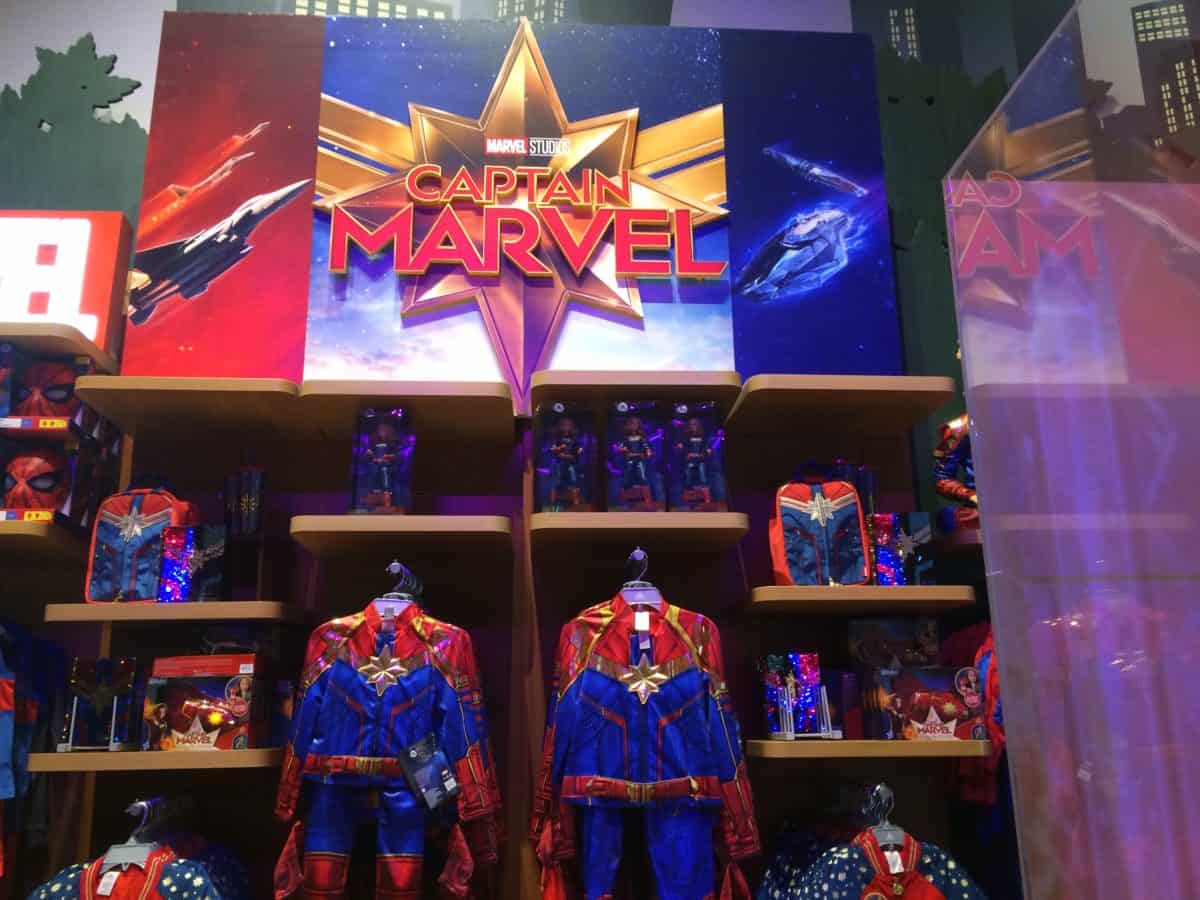 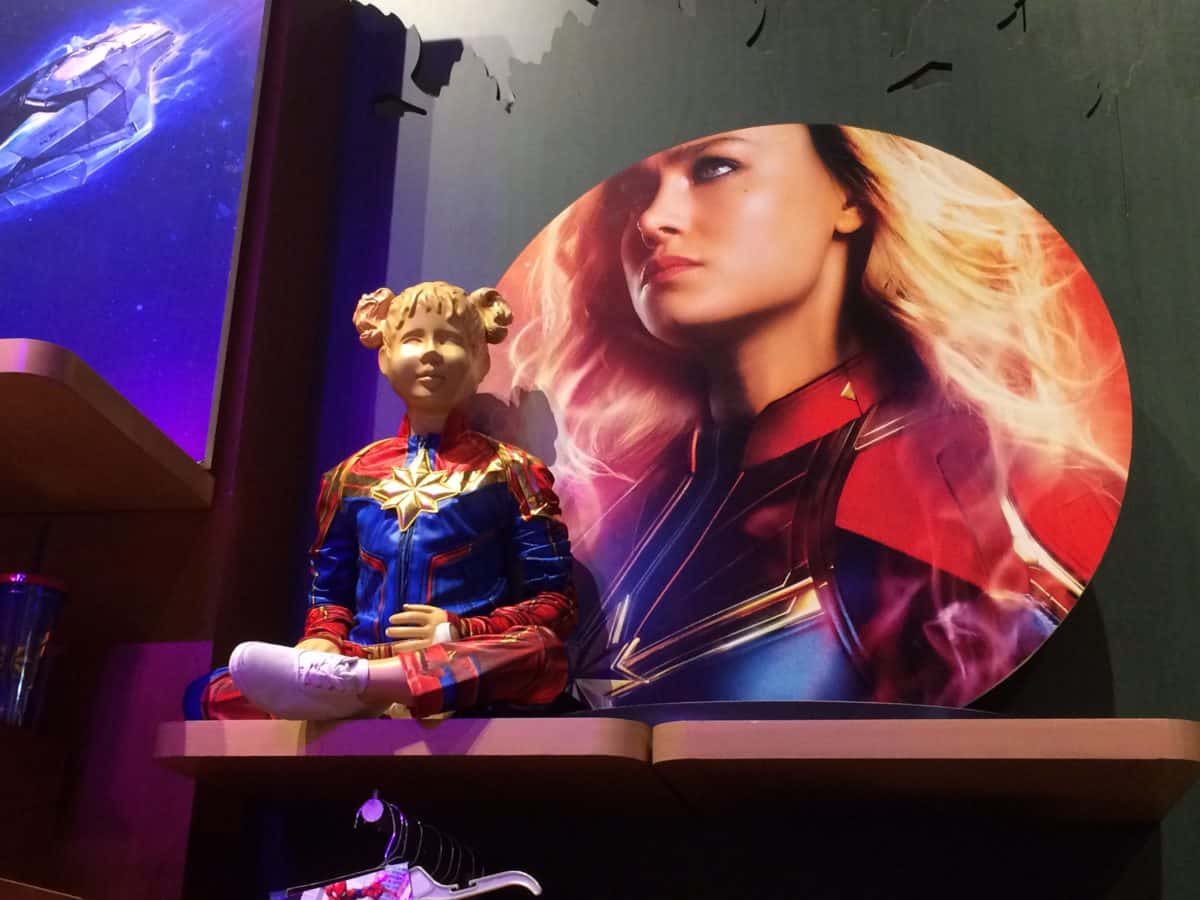 A number of round pictures of the film’s cast were on display, including Nick Fury (played by Samuel L. Jackson) and Goose the Cat (because we all need more Goose in our lives.) 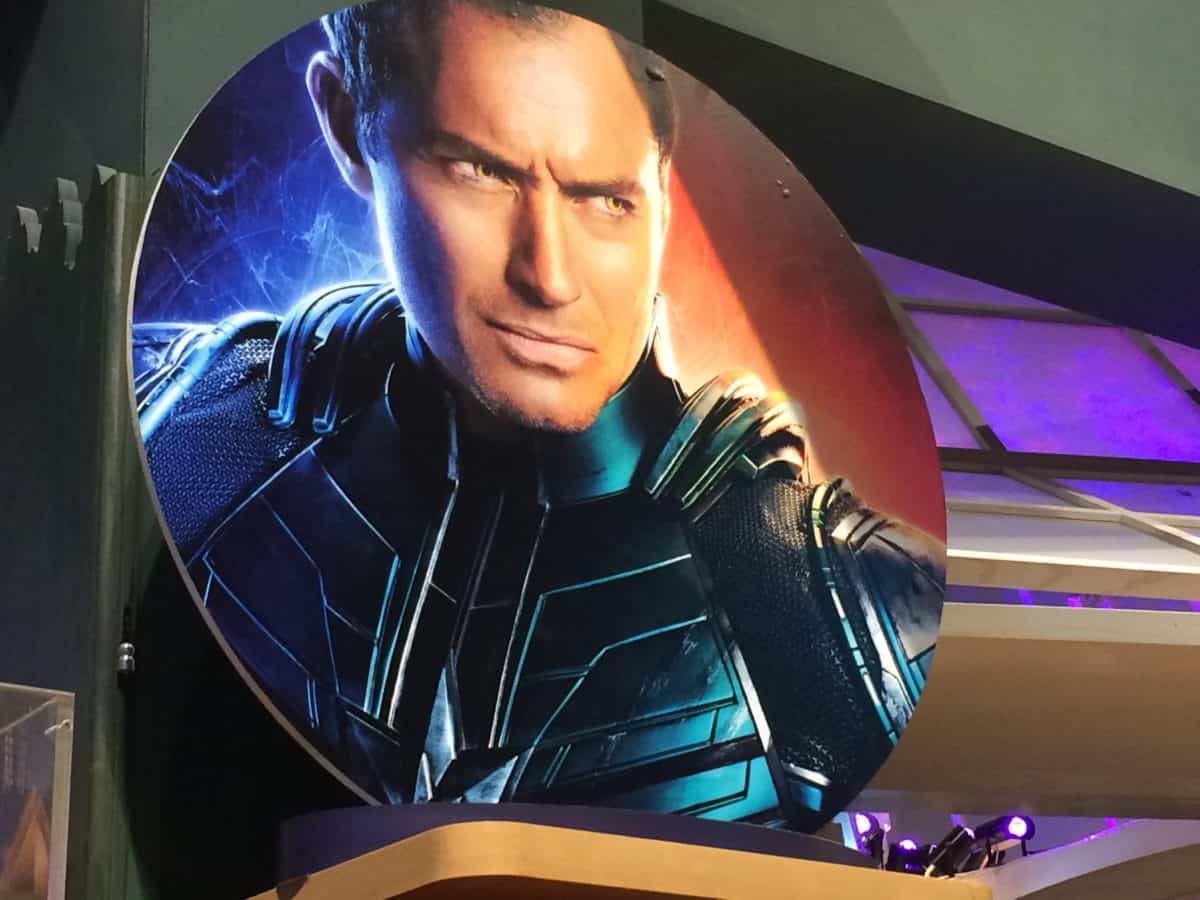 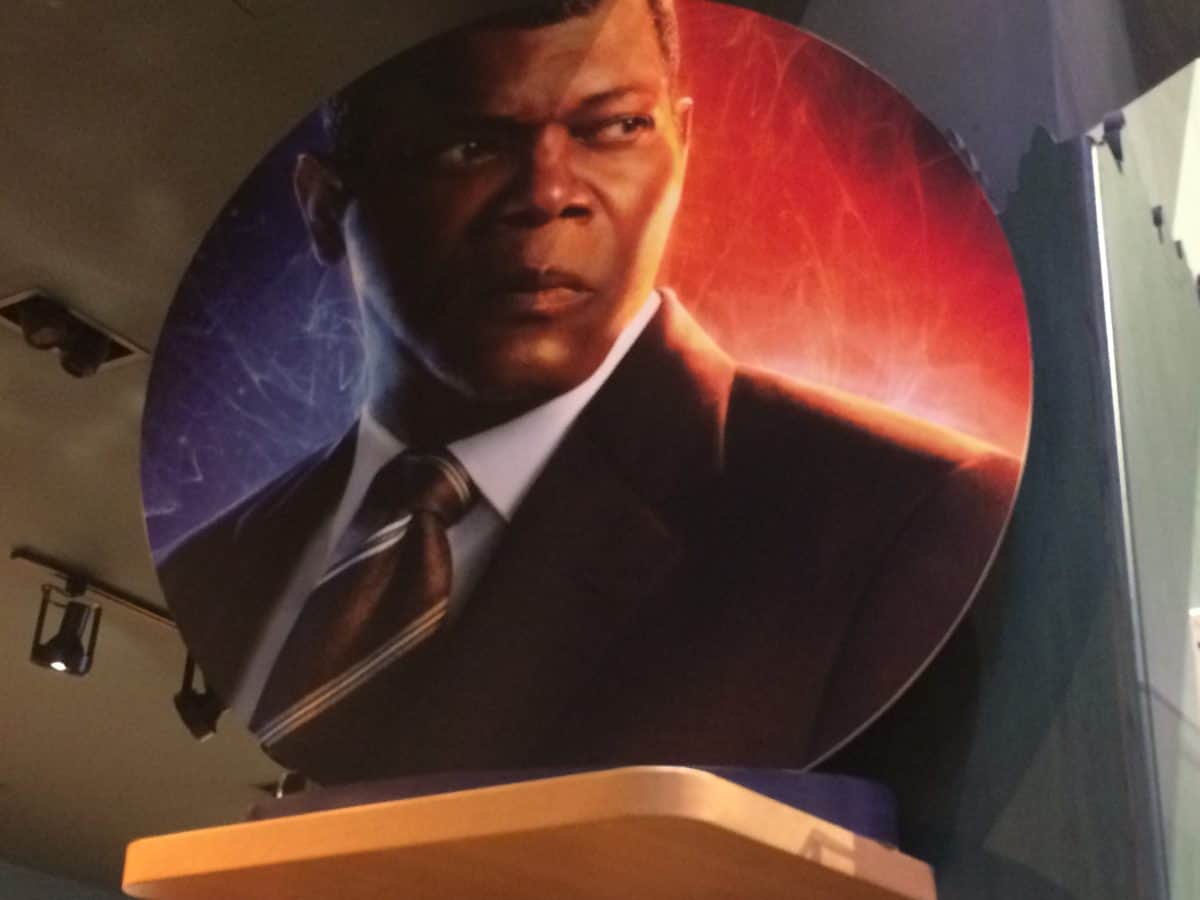 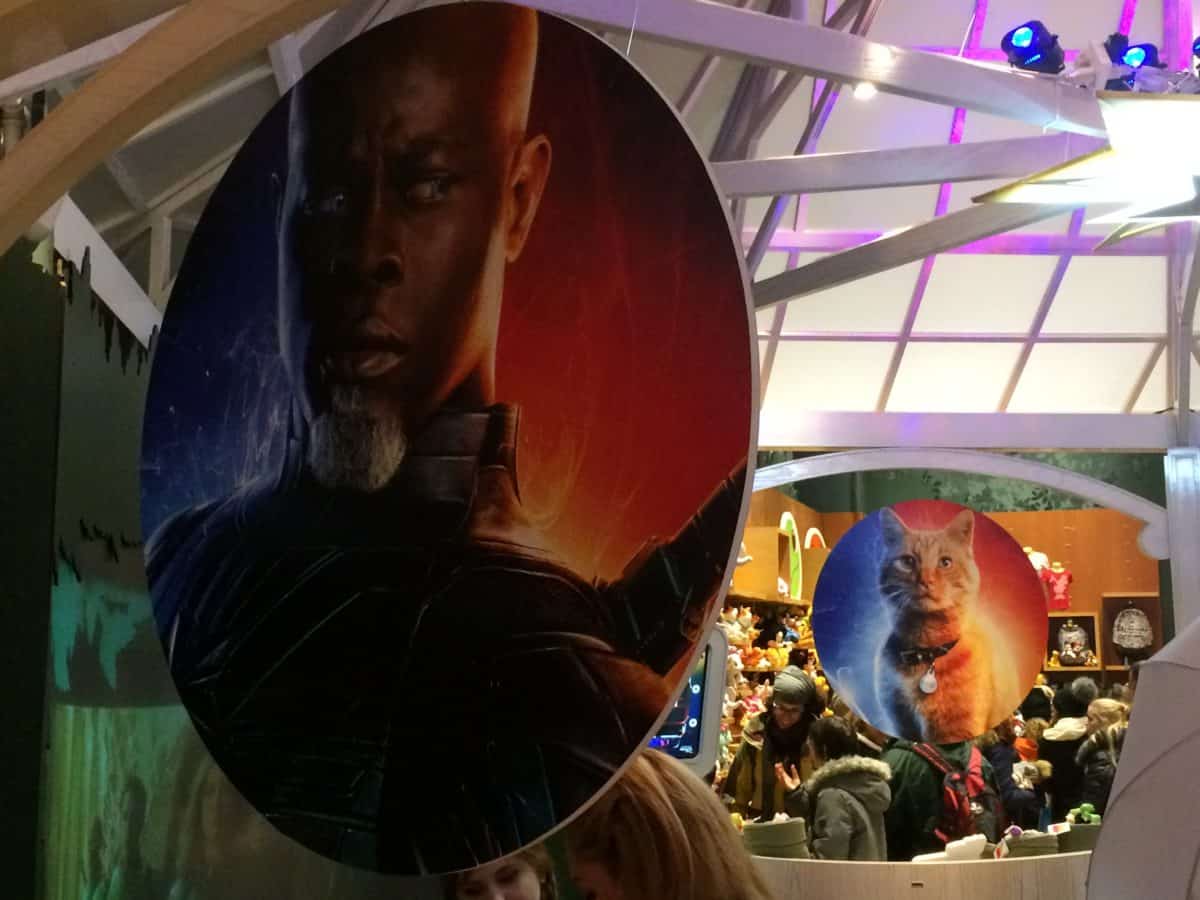 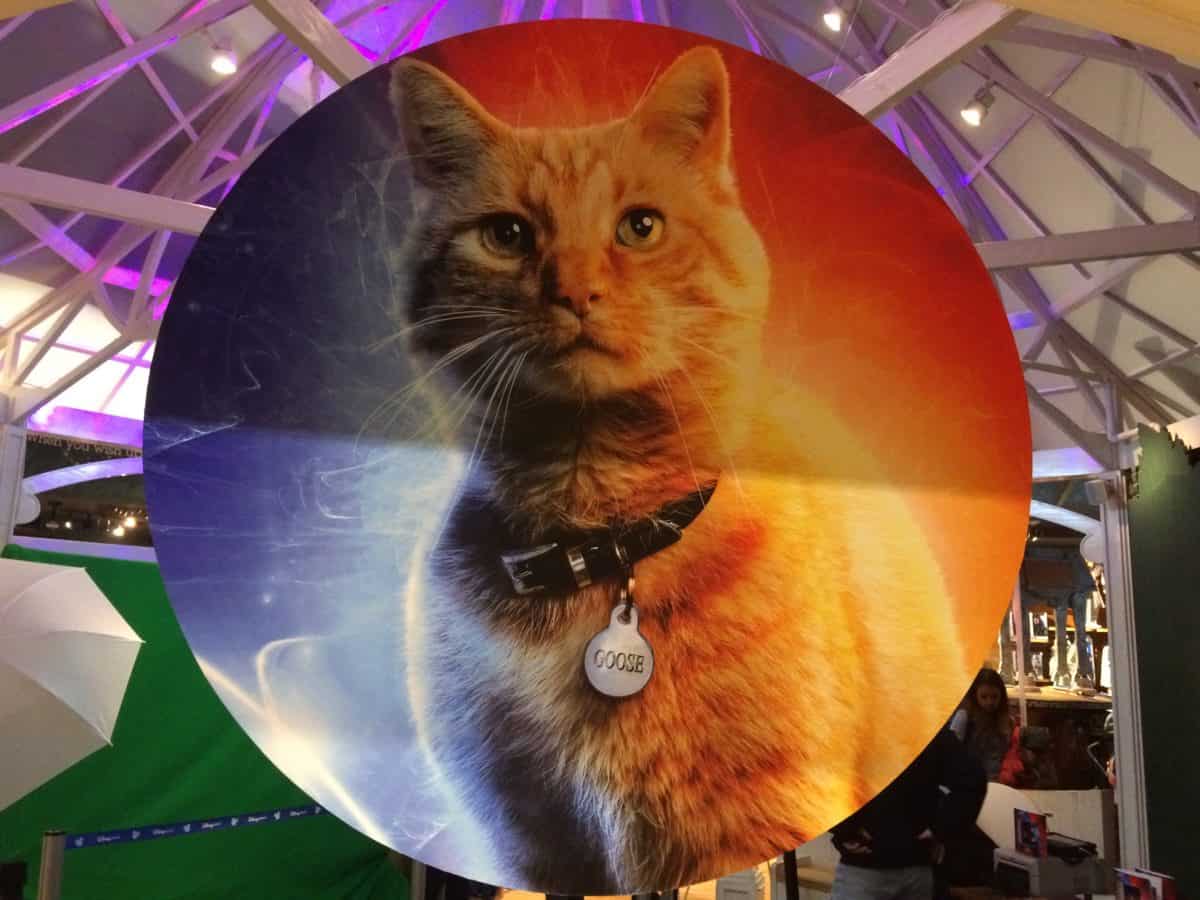 (Let’s be honest…the movie hasn’t been released yet and we already know Goose is going to be the breakout star of this film, right?) 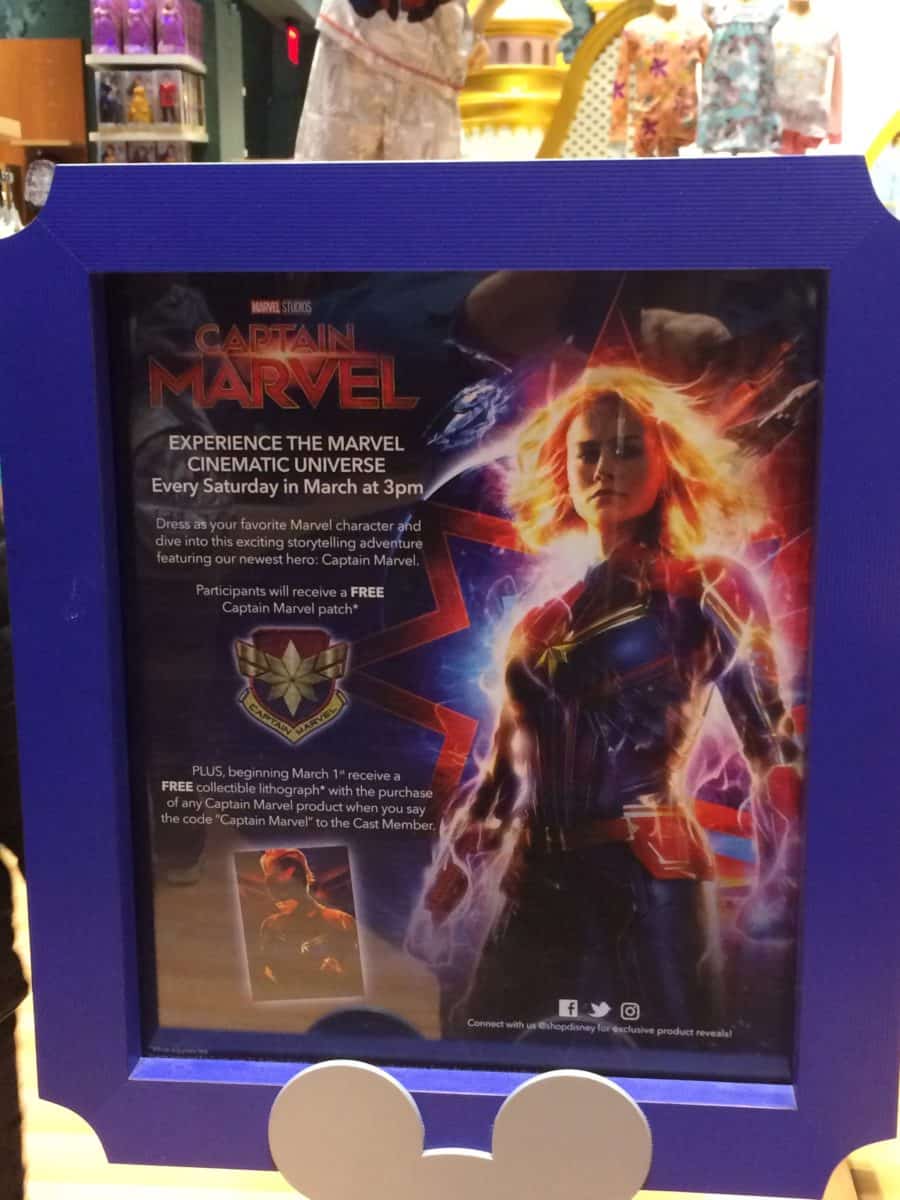 As luck would have it, I managed to get there just before their Saturday storytelling event, and managed to play along with kids and adults alike. 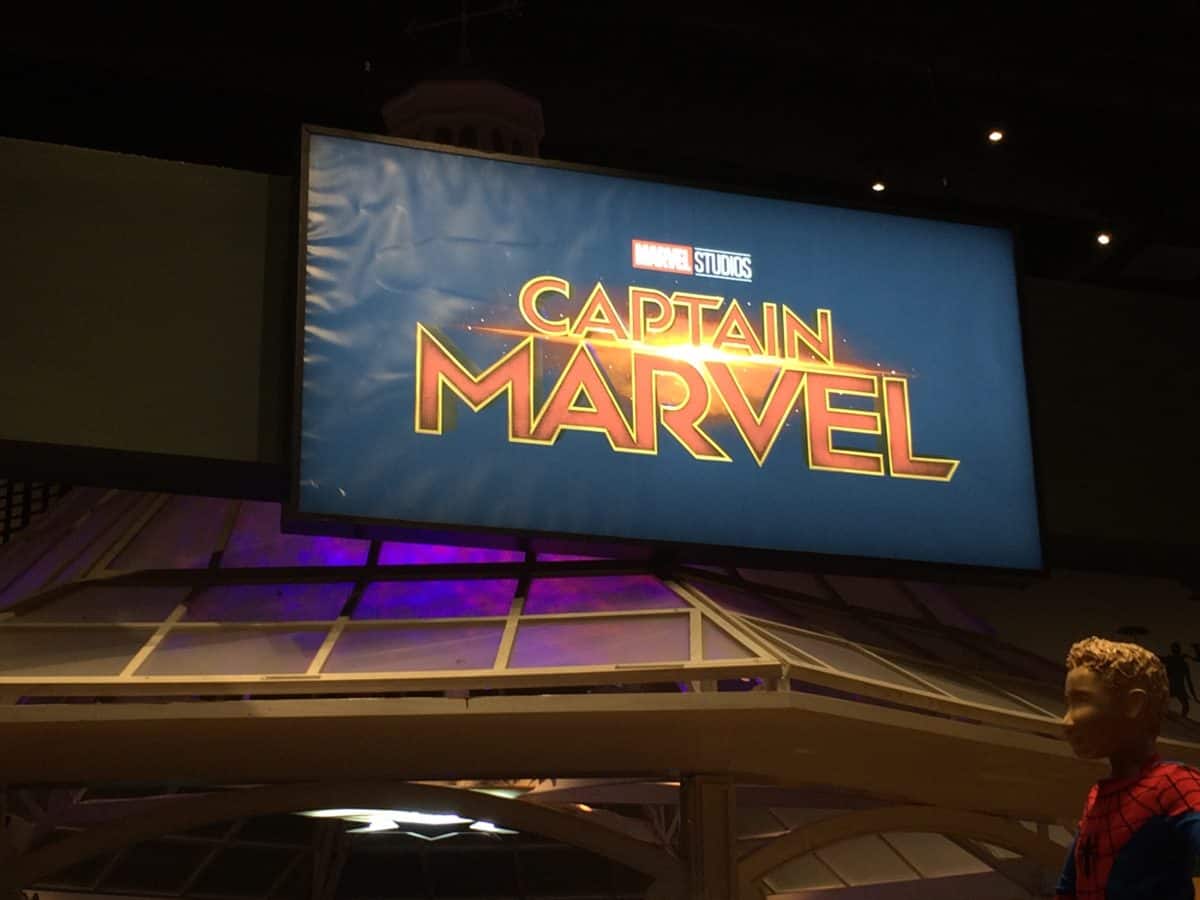 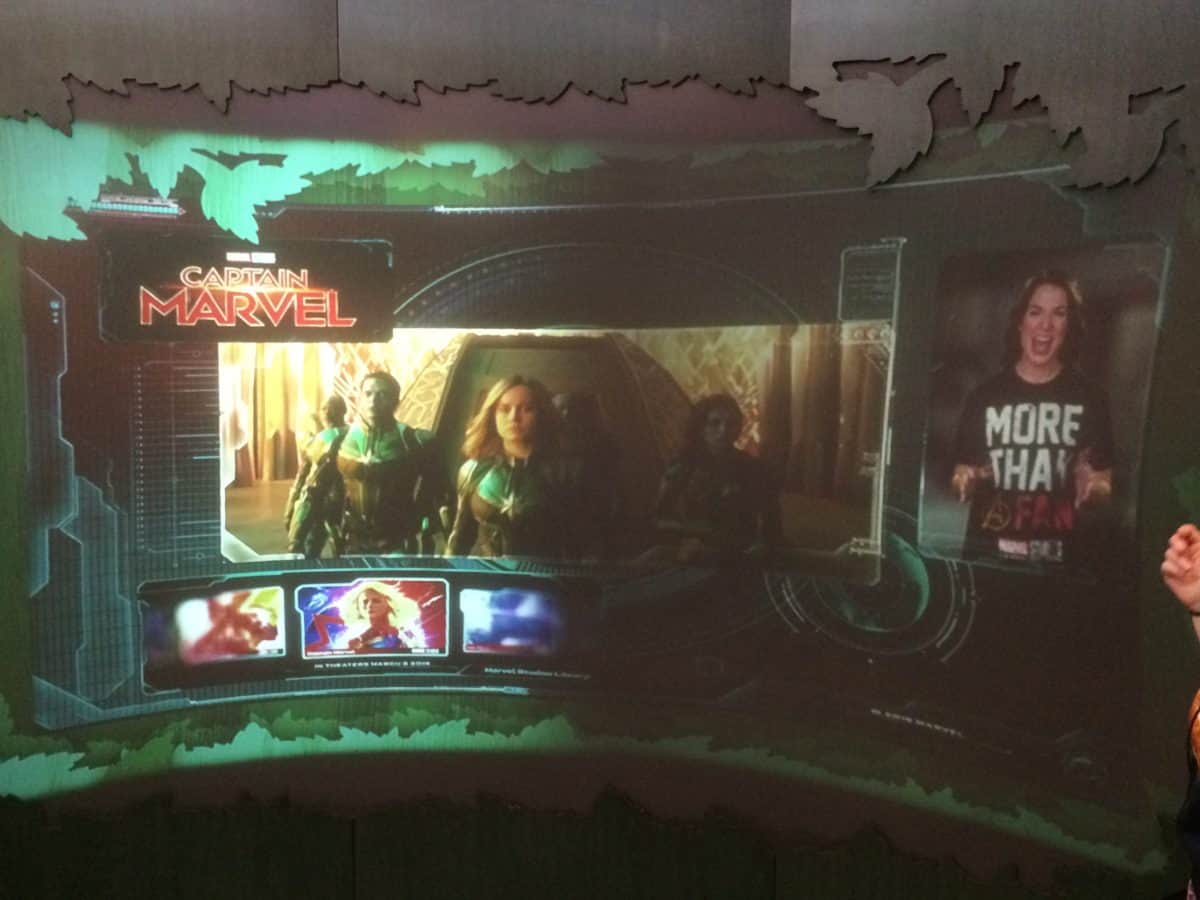 The storytelling experience was a fun look back at the entire history of the Marvel Cinematic Universe, as guests act like their favorite Marvel heroes. Thanks to two very enthusiastic Cast Members, guests were pretending to fly like Iron Man, hoisting Mjolnir like Thor, and shrinking down and popping up again like Ant-Man. This was the first day they were doing this particular event, so there were a few technical glitches (like unavoidably skipping Avengers: Age of Ultron and every Marvel Studios film from 2017), but the bubbly personalities of the Cast Members more than made up for it. 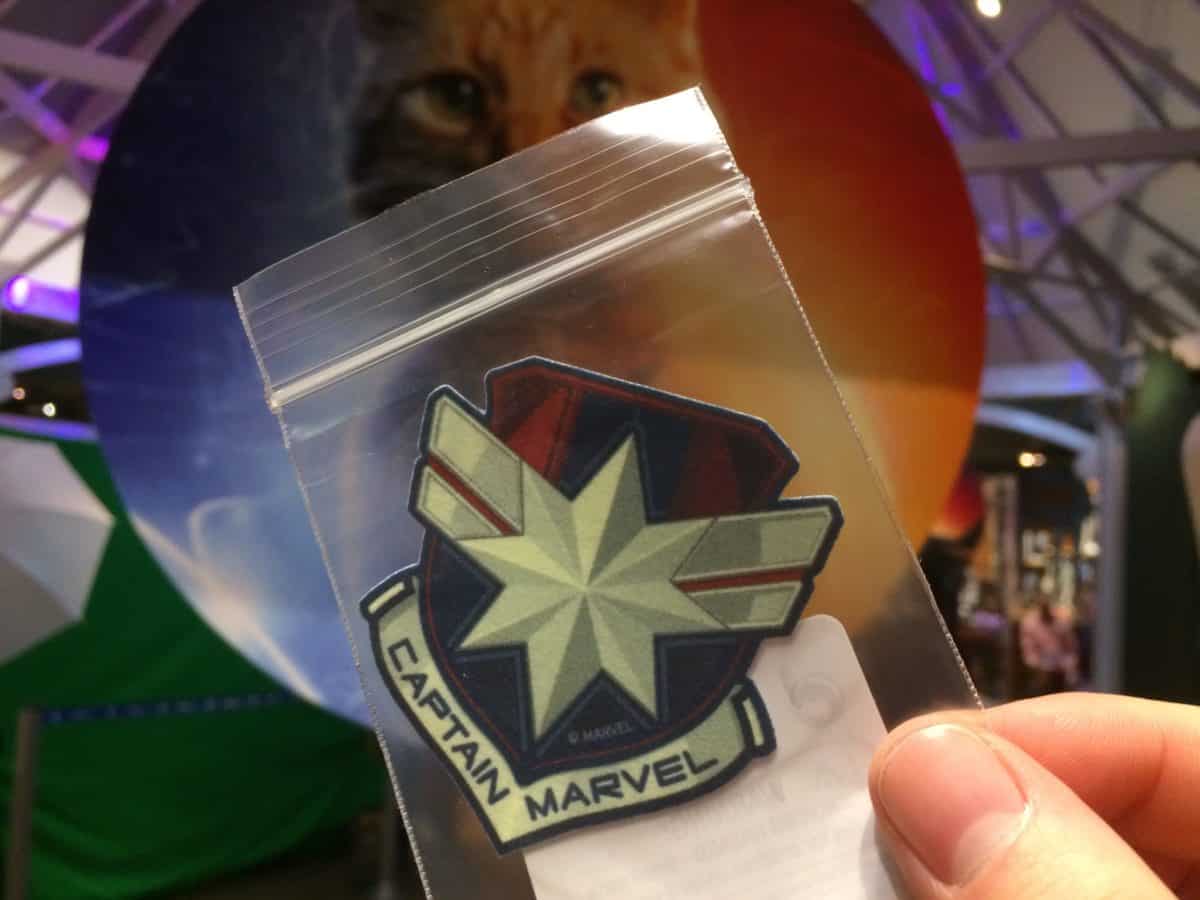 Those who participate in the storytelling events receive a Captain Marvel “patch,” as the sign in the store said. In reality, it’s a fabric sticker, but it’s still a welcome difference from the paper stickers given out at most in-store events. This one comes in a small plastic bag, allowing collectors to keep it in relatively good condition. (And as we’ve seen lately, it’s a rarity for Disney to even offer a plastic bag.) 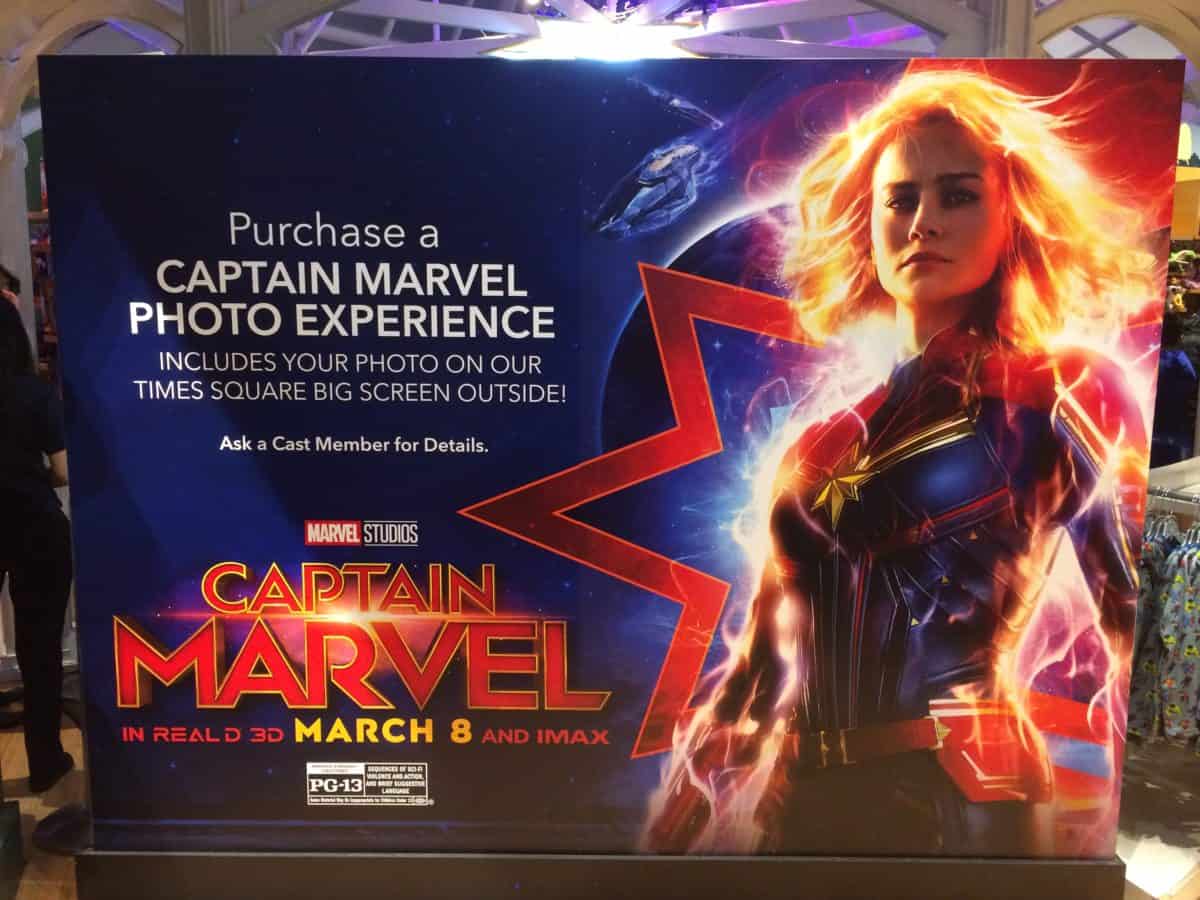 But if you want an experience only the Times Square Disney Store could give you, there’s the Captain Marvel Photo Experience. Guests (up to four at a time) can have their photo taken in front of a green screen, where they can put themselves in the place of Carol Danvers. (Props are supposedly available for guests to hold, though I did not see them being offered while I was there.) They then receive a printed version of the photo in a cardboard frame, a digital copy sent to their email address, and, if they opt for it, the chance to see their photo on the massive screen outside the store. (The photo displays are timed out in five-minute blocks on the hour and half-hour, so those who wish to see them will know when they’re going to appear on a Times Square billboard.) The package sells for $10, and comes with a commemorative Captain Marvel lithograph (available with a purchase of any Captain Marvel merchandise, while supplies last).

Naturally, I had to try this out, y’know, for the sake of journalism. Yeah, let’s go with that. 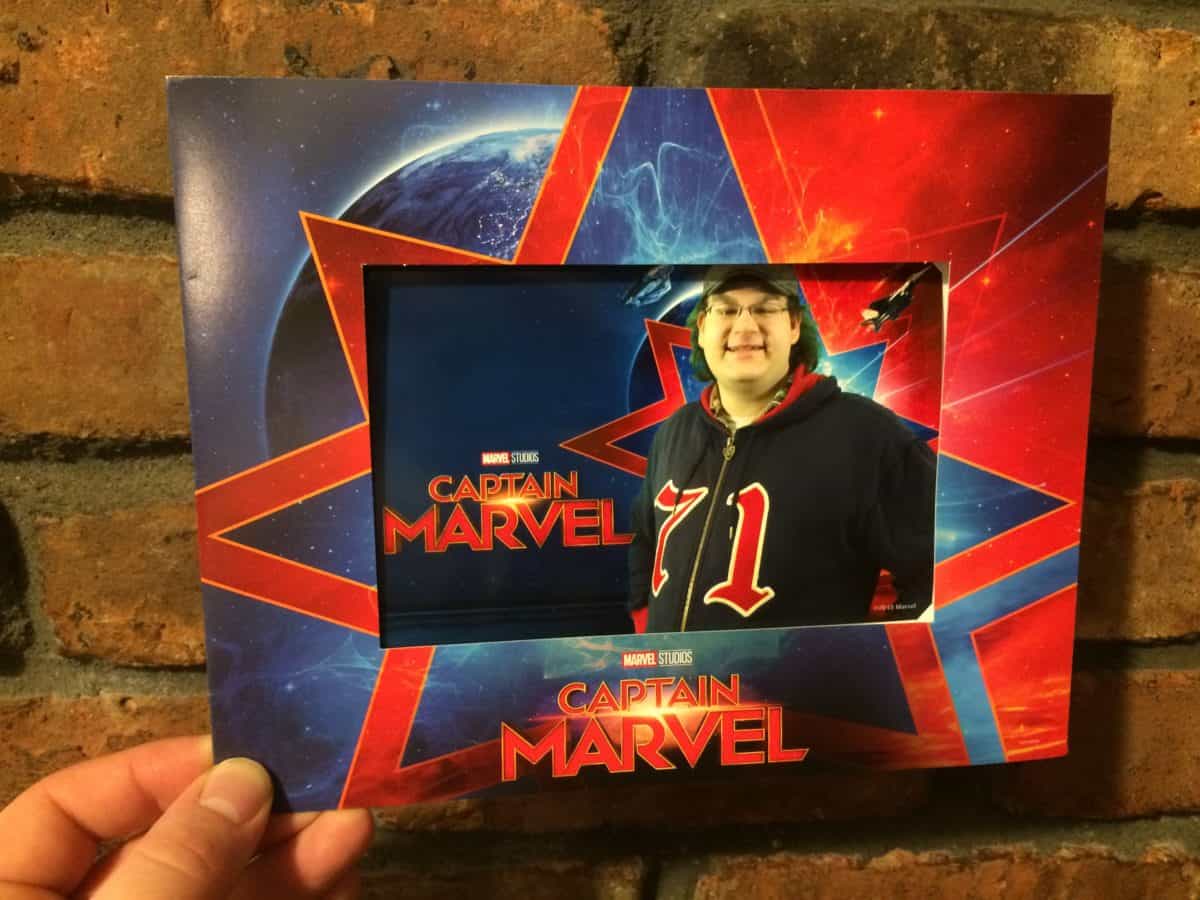 My one complaint is that the cardboard frame isn’t very firm, and that it doesn’t have a back to hold it up. You’ll have to prop it up against something if you want to display it. 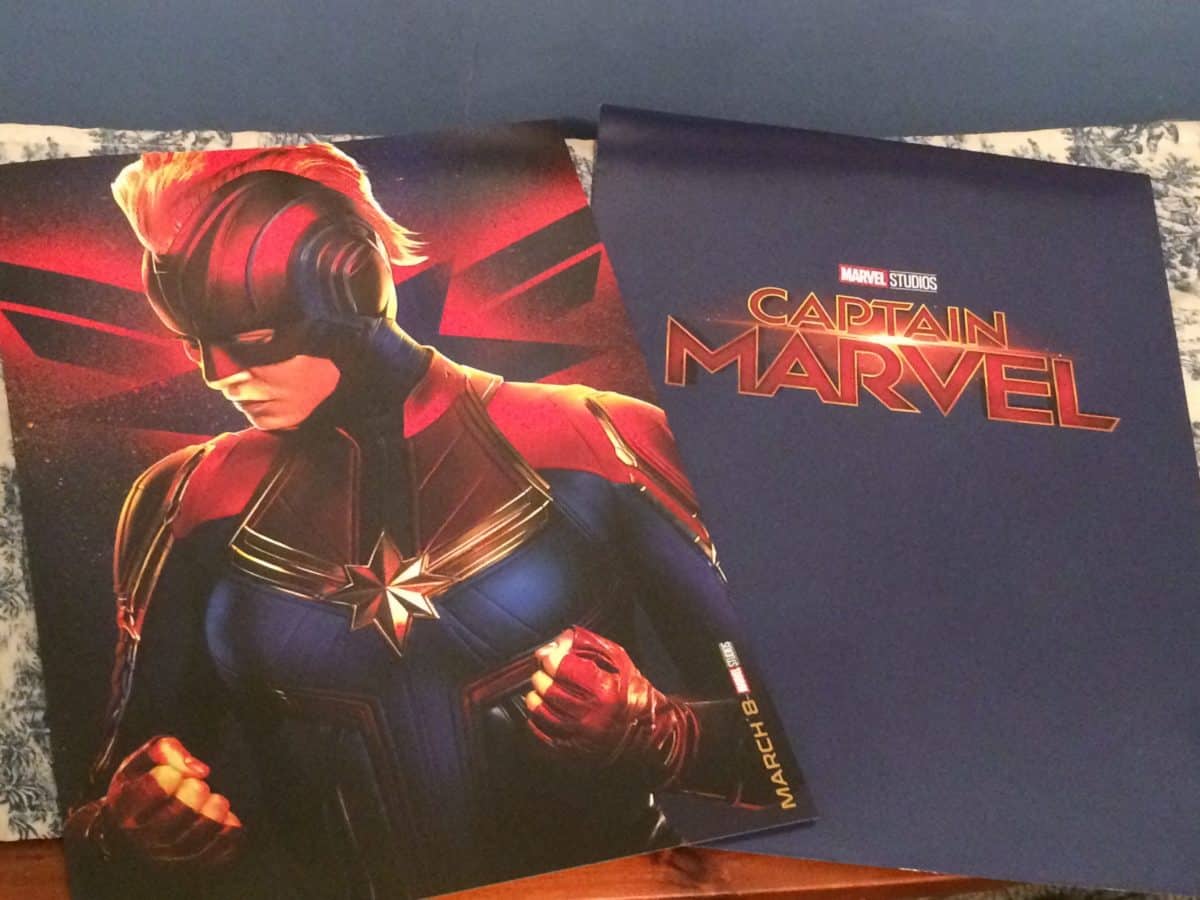 The lithograph is pretty nice. The envelope (on the right) that it comes in isn’t a hard cardboard, but I found it served its purpose. It’s a decent premium for “free with any Captain Marvel purchase.” 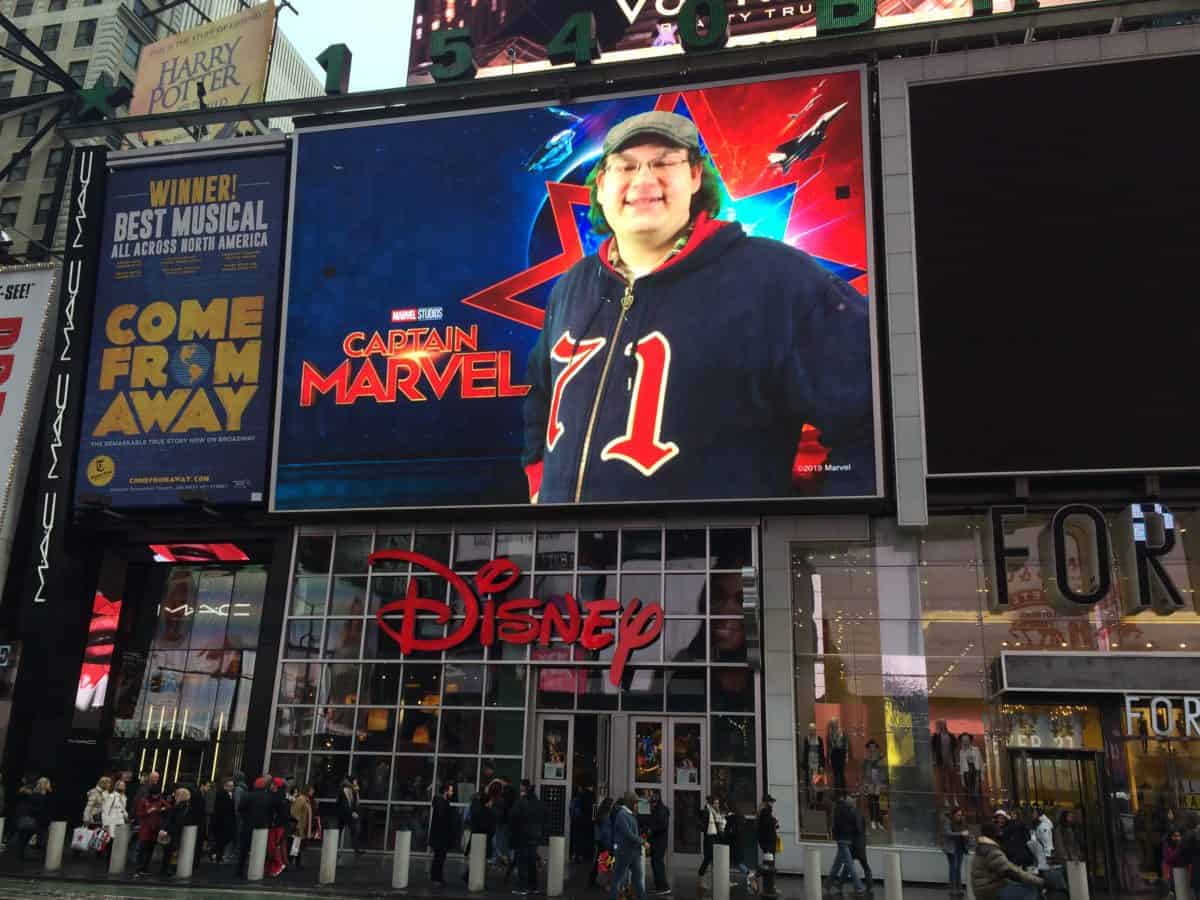 And yeah, it is pretty darn cool to see your face on a billboard in Times Square. For $10, it’s not bad if you want something to have a sweet photo op (and make some folks jealous). A printed photo in a frame, a digital photo, thirty seconds on a Times Square billboard, and a lithograph feels like a good value for the price.

I should add that I was warned before purchase that all digital photos had to be downloaded by March 8th, or they would be deleted from their database, which presumably is when this pop-up experience will end. So if you’re a major Captain Marvel fan, I’d hurry to the Disney Store at Times Square to be a part of a unique event. 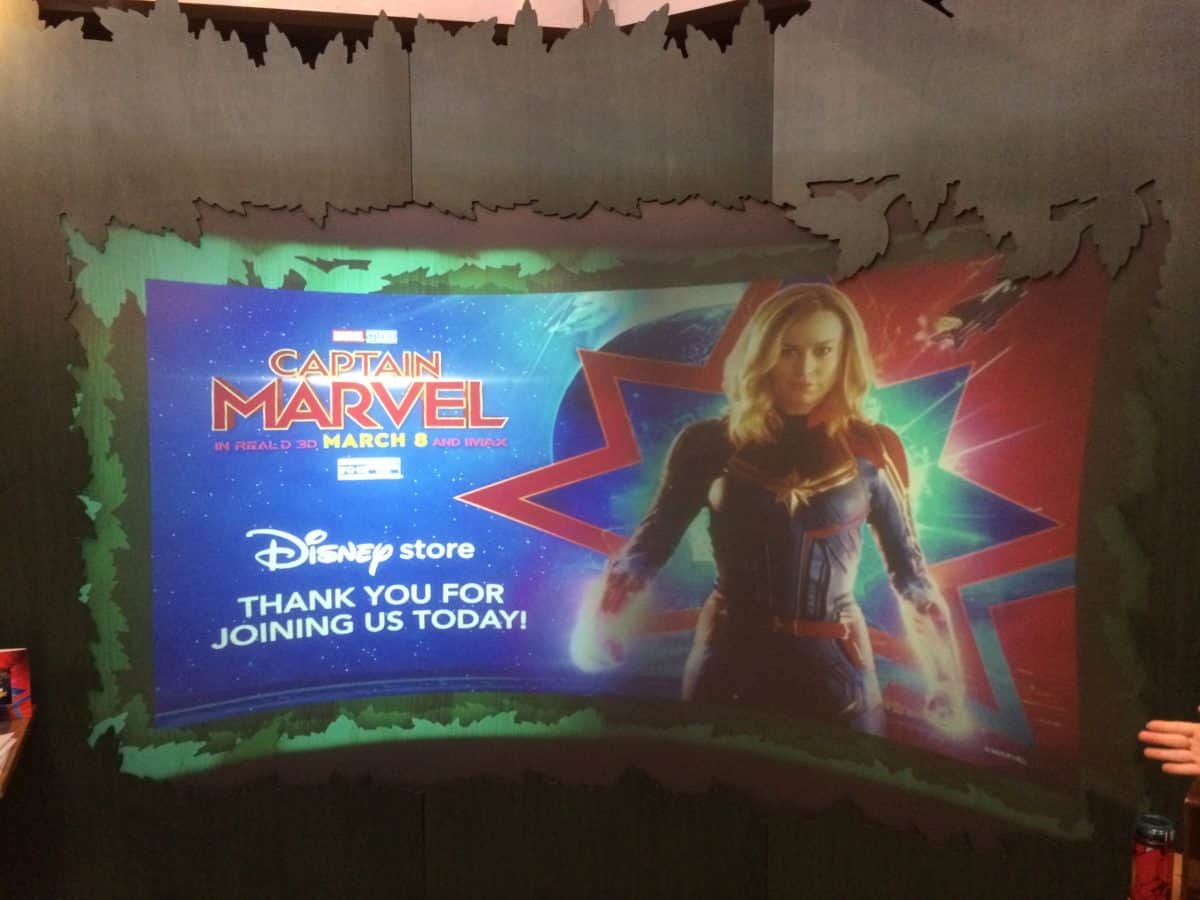