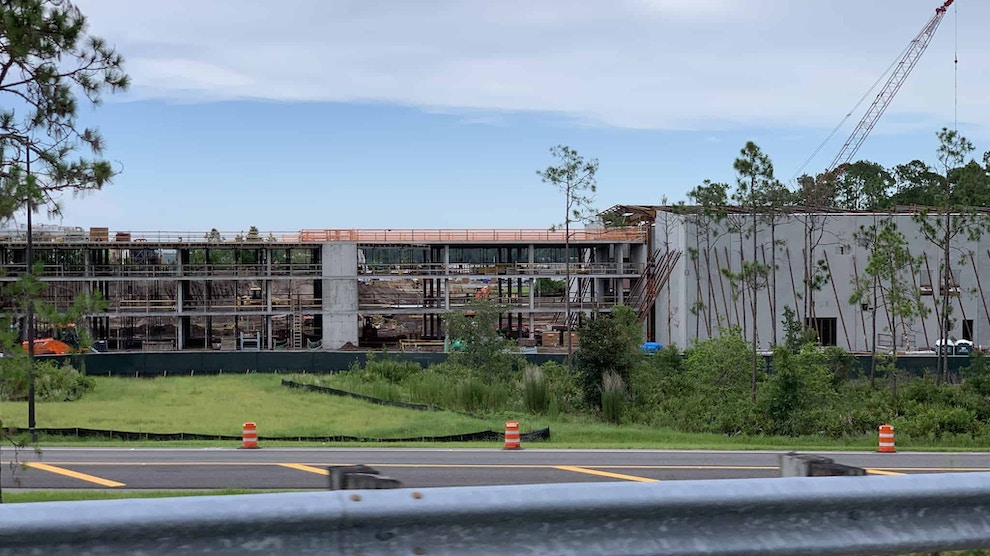 It’s been a while since we checked in on the upcoming new Star Wars immersive resort, “Galactic Journeys: A Star Wars Adventure.” (That’s its proposed name, anyway.) But we’re back today with what seems to be a full wing of guest rooms that’s finally taking shape. If you’re new to the Star Wars hotel, we brought you breaking news of the resort’s initial concept back in April 2017, as well as permits for the hotel’s layout back in November 2018.

With construction moving quickly on the project, it’s fun to match up the plans to what’s actually on the ground. Let’s take a closer look and see how the site is progressing. 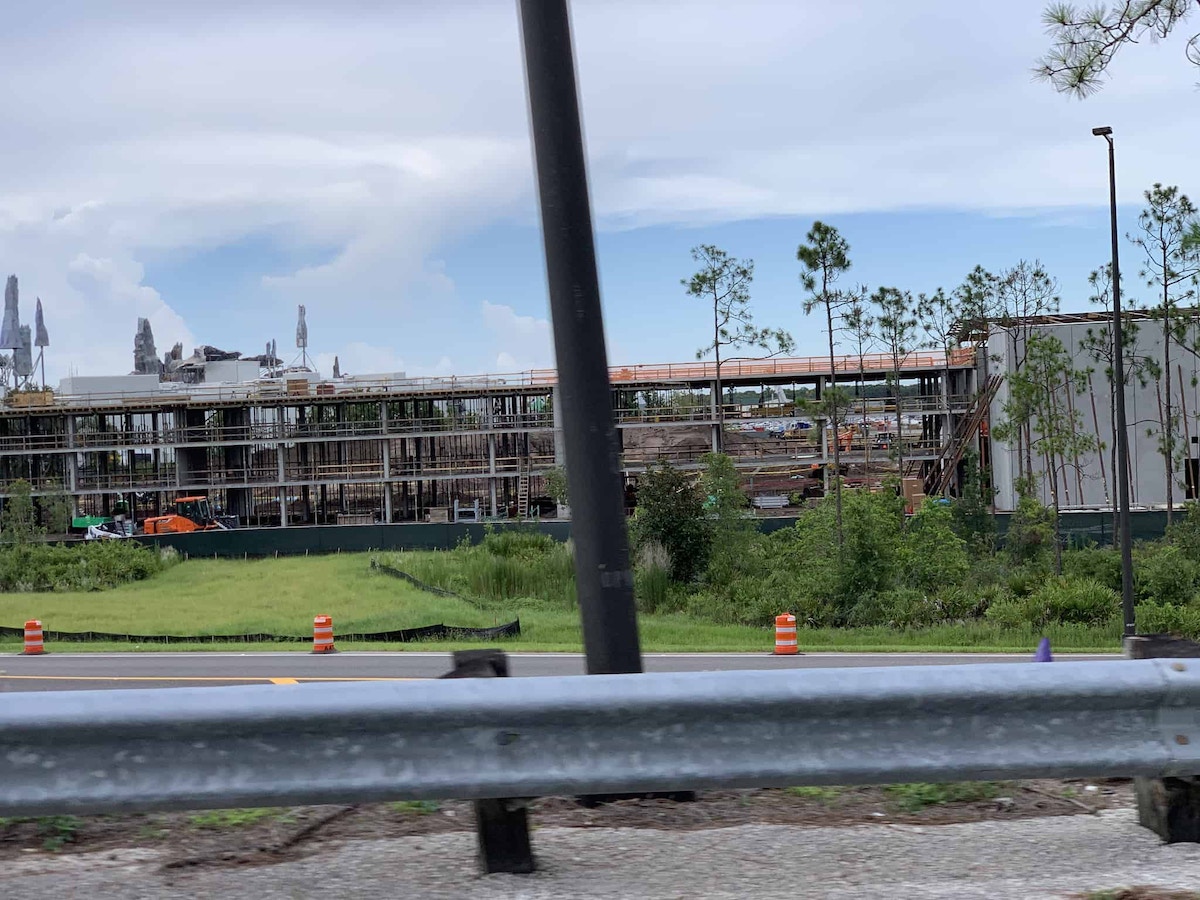 The hotel is being built on the south side of Disney’s Hollywood Studios, east of World Drive, and it’s meant to be seamlessly connected to Star Wars: Galaxy’s Edge, allowing guests to fully immerse themselves in the story behind their stay at an interstellar cruise liner. 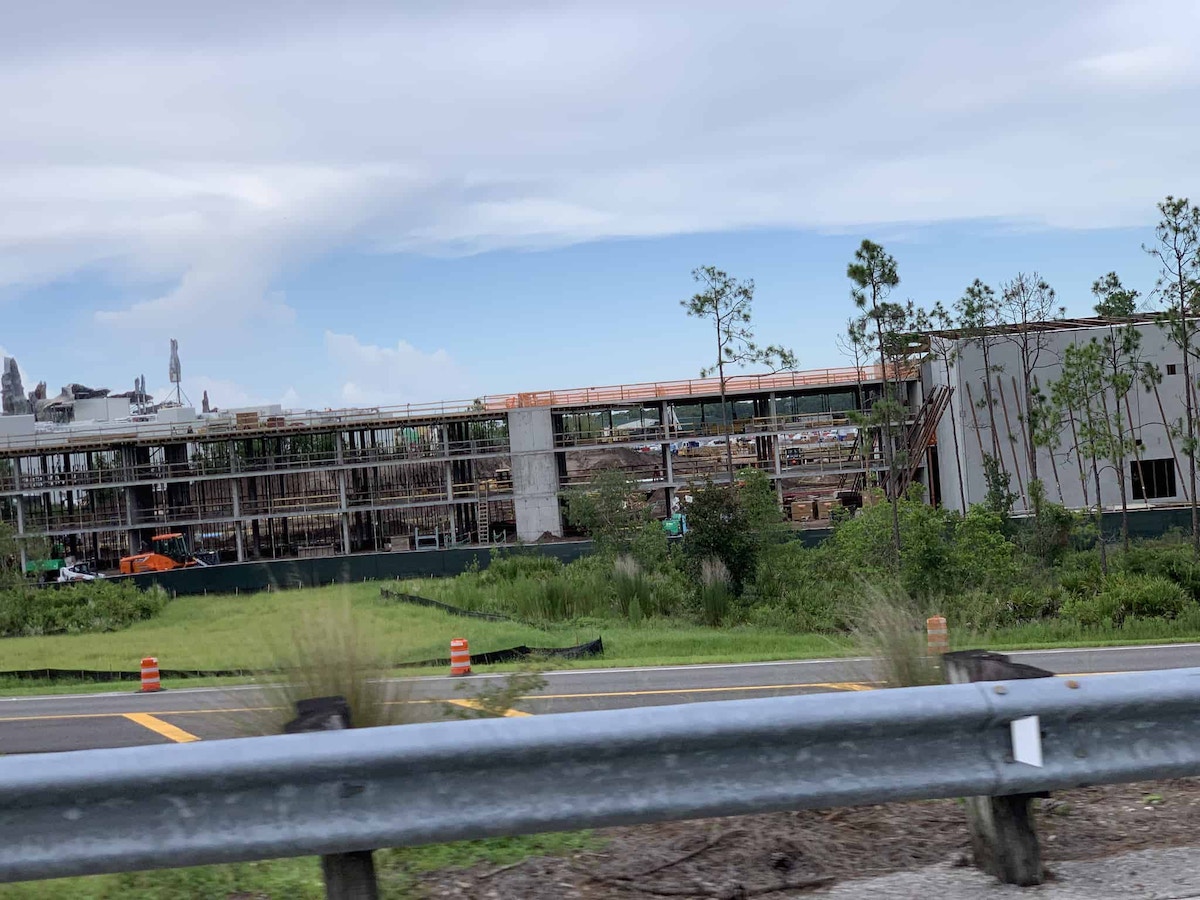 You’ll notice that there’s a main building––which we saw go vertical back in May––on the right, and a series of guest rooms jetting out from it. 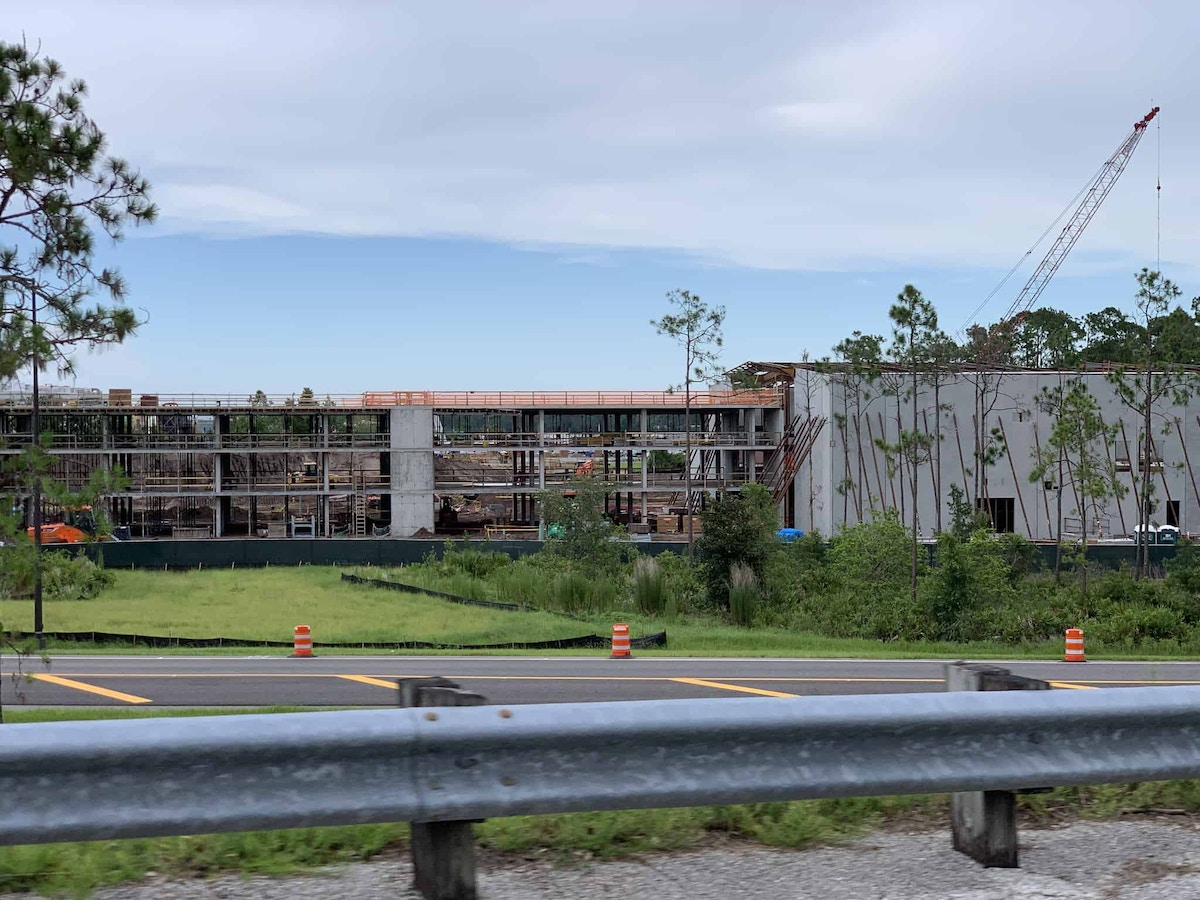 Here’s a refresher on the hotel’s layout: 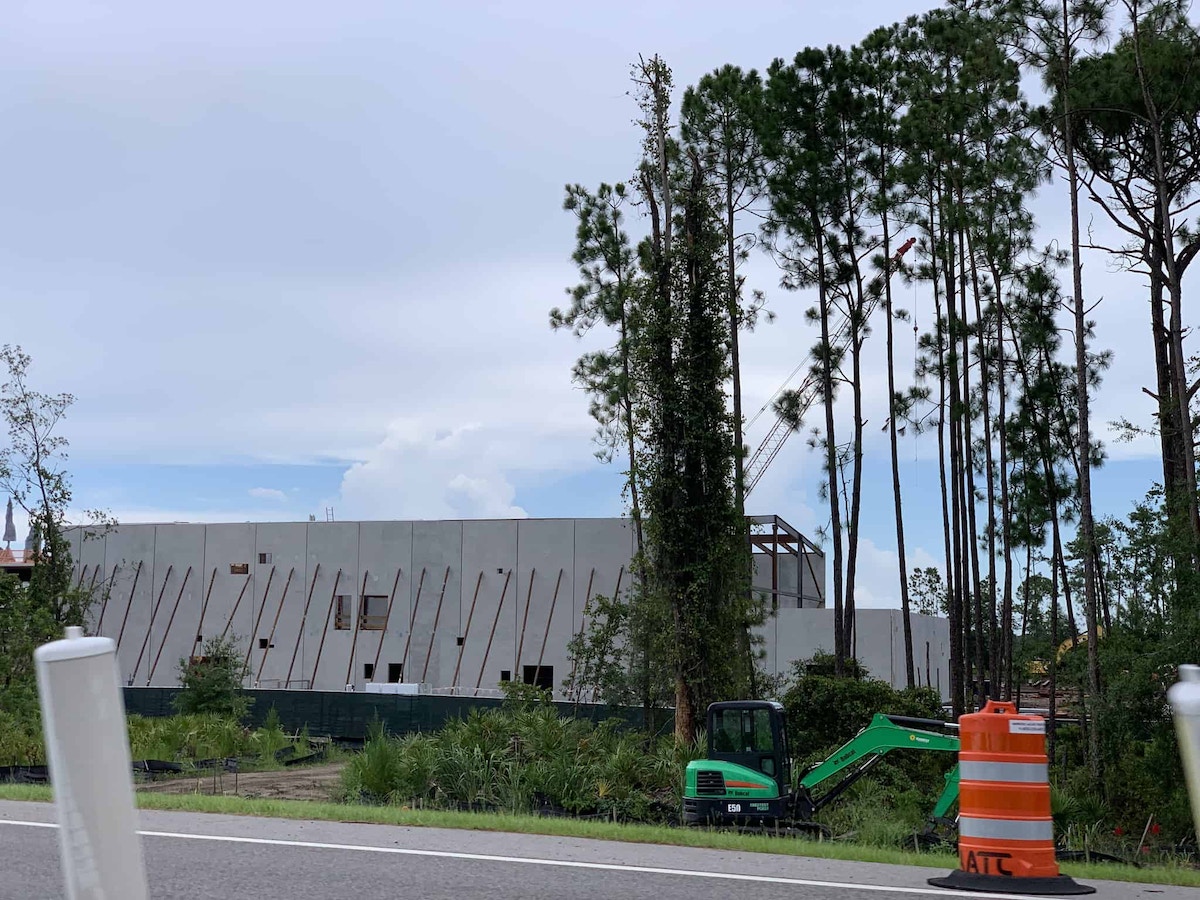 This main building will comprise back of house and dining facilities, as well as the themed arrival experience and shuttle to Star Wars: Galaxy’s Edge. That’s right, guests will actually be transported via some type of shuttle bus vehicle that will keep them in the story while bringing them to the planet of Batuu.

Also interesting is that this hotel will handle security for the park when guests arrive and check in. The idea here is you will be enclosed in this immersive experience for set amount of time, only traveling between Hollywood Studios and the hotel’s “luxury starship”, so they won’t take you out of it by passing you through metal detectors and bag check. 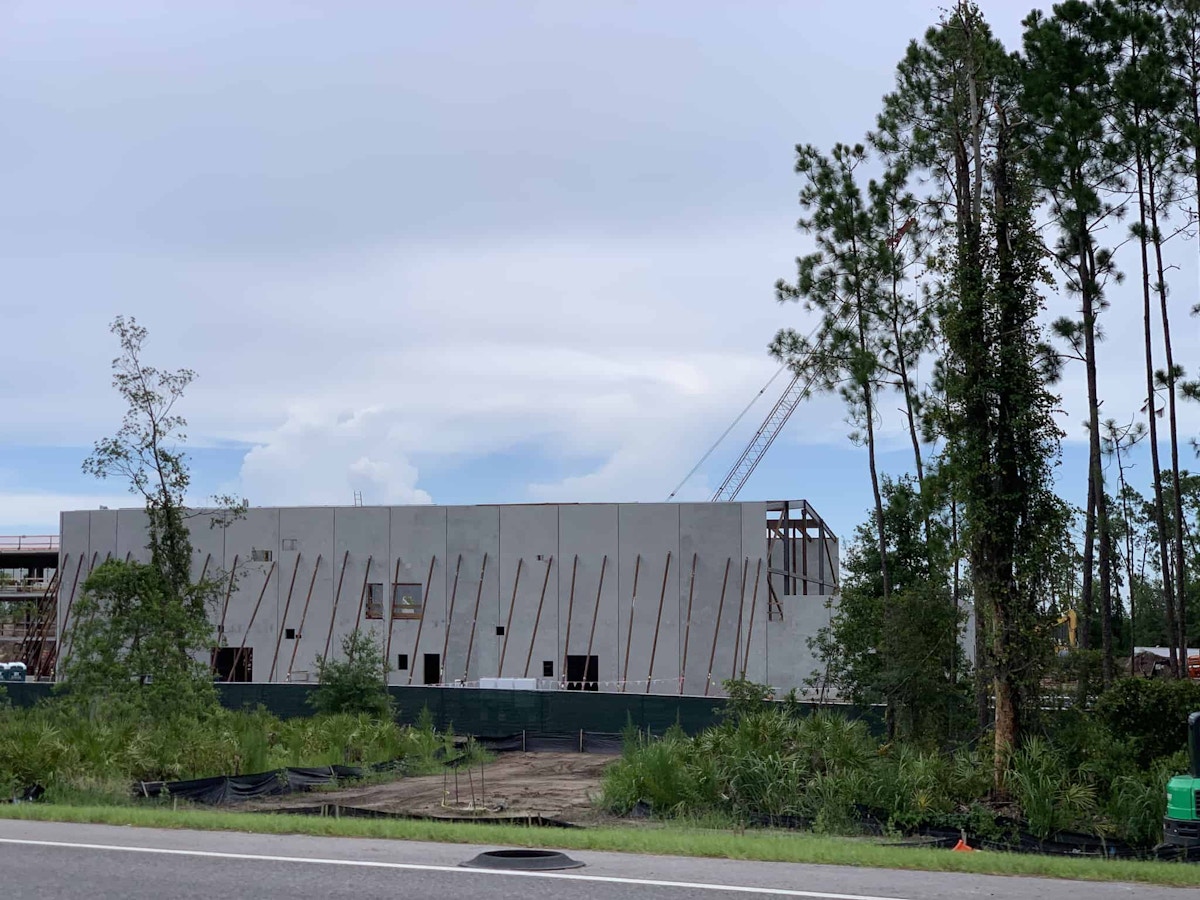 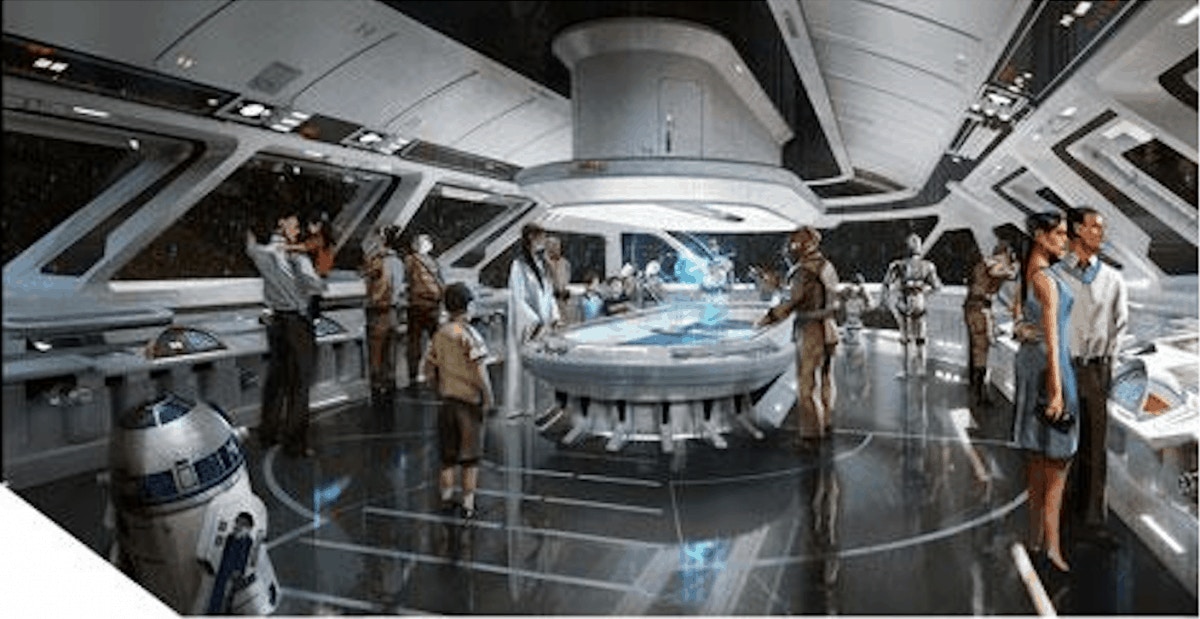 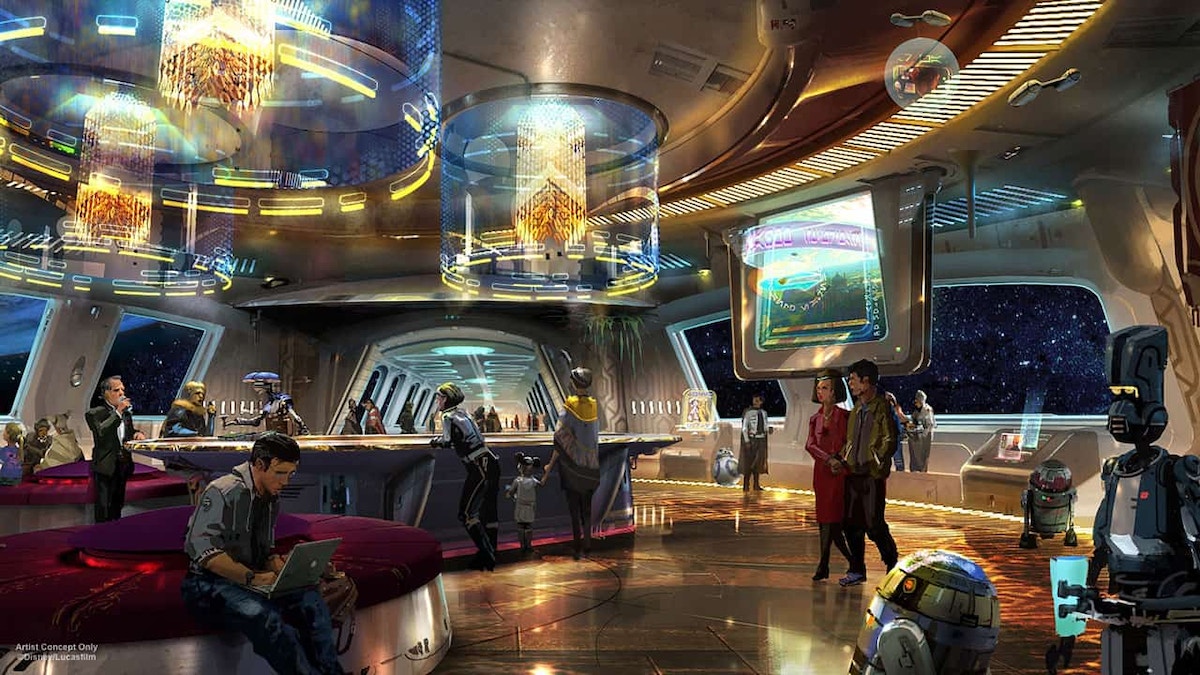 Various versions of concept art have been released for the lobby and its facilities. Amenities at the resort include a pool area and water garden, ﬁtness area, on-board cantina, and robotic droid Butlers (as seen in the concept art above!) A dinner show concept that was initially canned for the land itself will also debut here. The Chandrila Star Line experience will include the dinner show as part of the “all-inclusive” resort price, which is expected to be quite hefty per person. 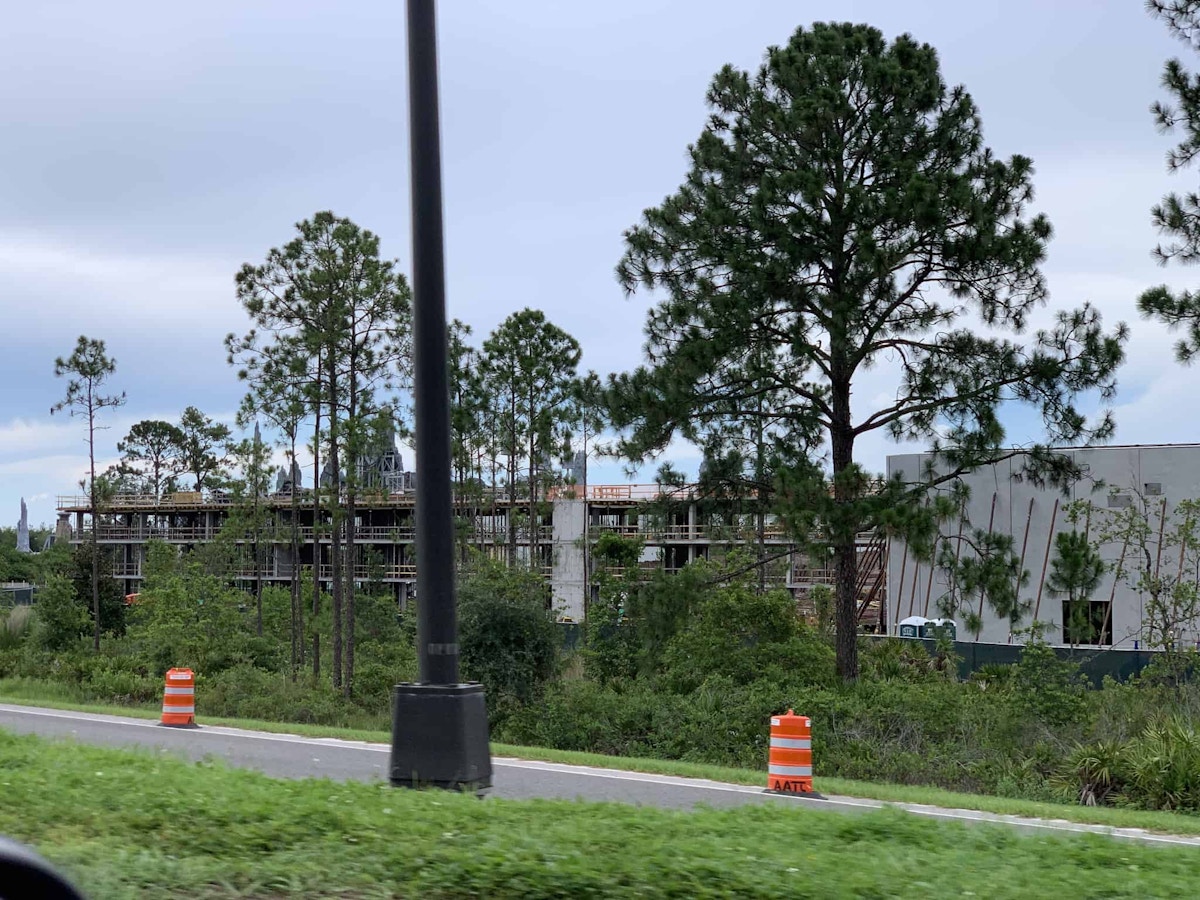 Now let’s take a closer look at the rooms, or the guest cabins, as Disney describes them… 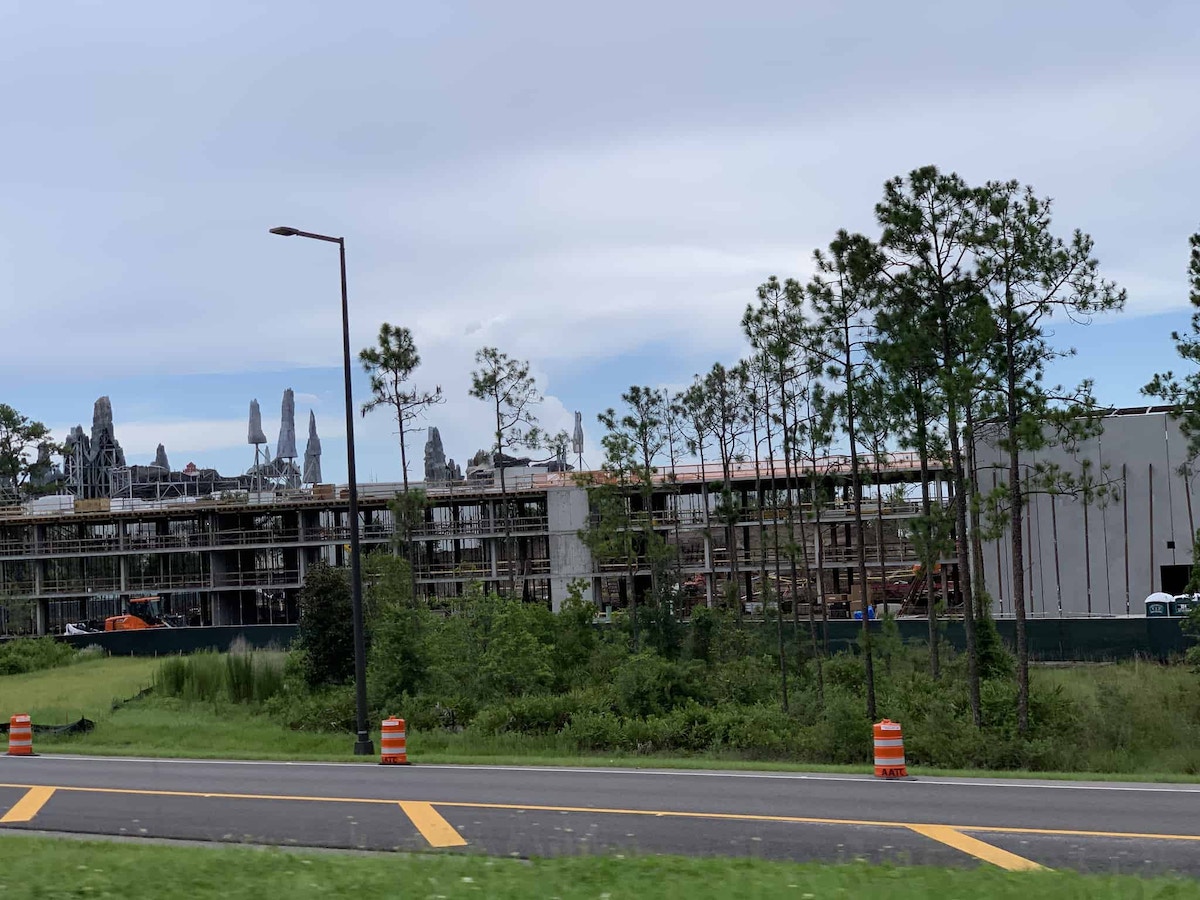 It’s hard to pinpoint the regular cabins from the “first-class” cabins this early on in construction. 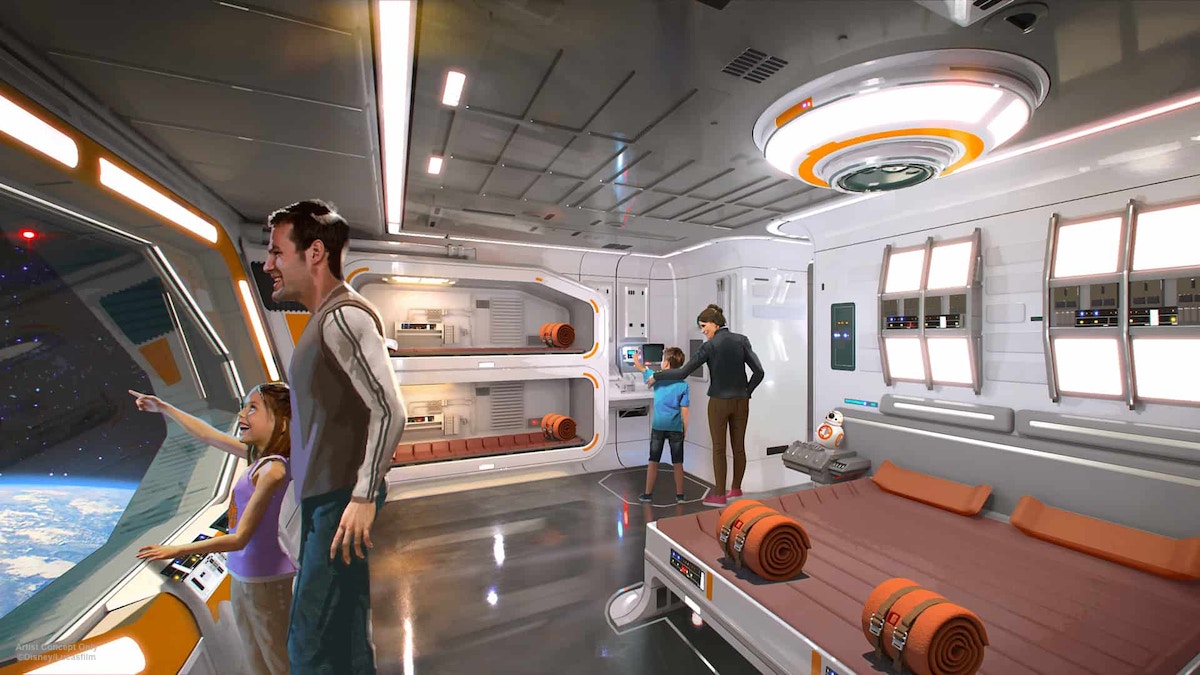 In any case, the rooms are meant to be streamlined and sleek, with integrated bunk beds and windows showing vast expanses of space or your favorite planet in the Star Wars universe. Regular rooms can accommodate up to 4 people, all with an interactive “view”. 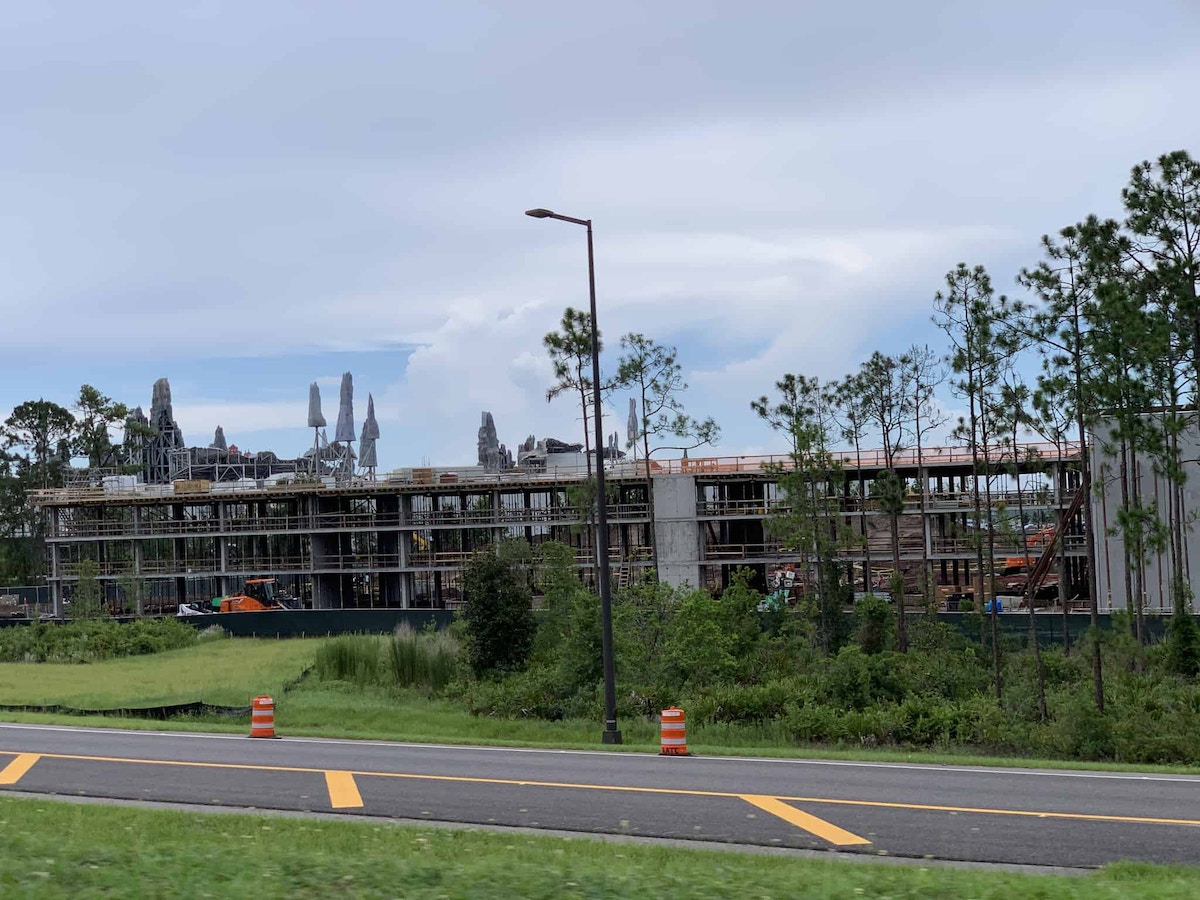 What Disney’s going to do about those awkward floating spires is anyone’s guess, but with the hotel being a self-enclosed star ship or interstellar cruise liner, essentially, what the outside looks like once you’re checked in is pretty irrelevant. 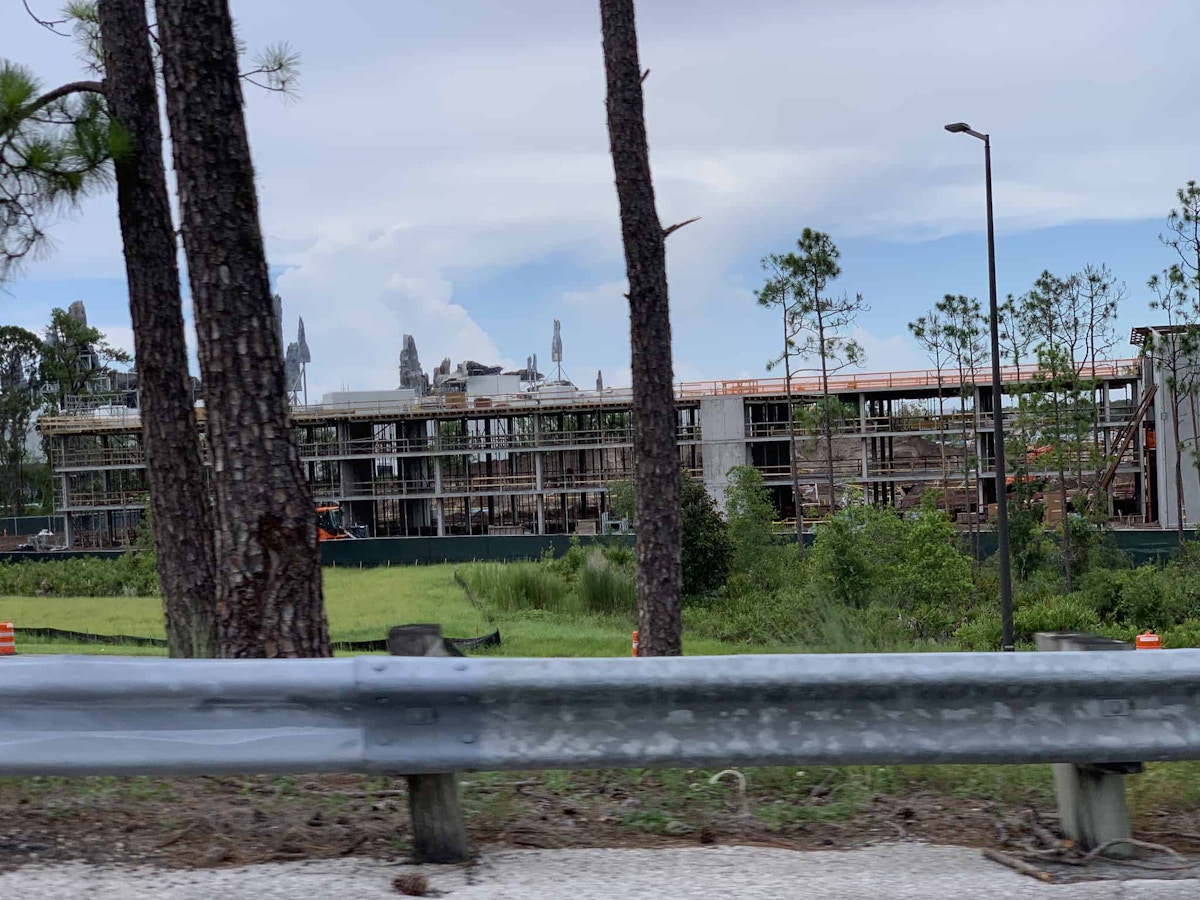 We’ll keep checking back in to track the progress of the hotel and its burgeoning guest cabins. Til the spire!

Thanks to wdwmagic for first sharing this. Jessica can’t do anything but copy and paste.

These are my photos…

In terms of pricing, is there any word on how ‘hefty,’ ‘hefty’ is? Thanks for the great pics, concept art and diagram.

Any idea when we will be able to book a room? As an annual passholder, we are limited to 30 days out for making fast passes in advance.
It seems like the only way we’ll be getting on those new rides is if we book a room and get a FP well in advance.
Besides, my husband would absolutely enjoy staying at this hotel!

The “full immersion” concept of boarding a starliner that takes you to “Galaxy’s Edge” reminds me of the journey to the moon ride at Disneyland in the 1960s. I hope they can successfully pull it off. Doesn’t sound like any of this is going to come cheap. But – on this one – “they had me at hello,” so we’ll do it.

The real question is…does that include theme park admission?