With Millennium Falcon: Smugglers Run and Mickey & Minnie’s Runaway Railway now available as FastPass+ selections, the mad dash every morning to secure FastPasses from the My Disney Experience app has begun on every new subsequent day added to the calendar. However, it seems that a recent glitch in the app has been converting these highly-coveted Tier 1 FastPasses into, well, less than ideal Tier 2 options. 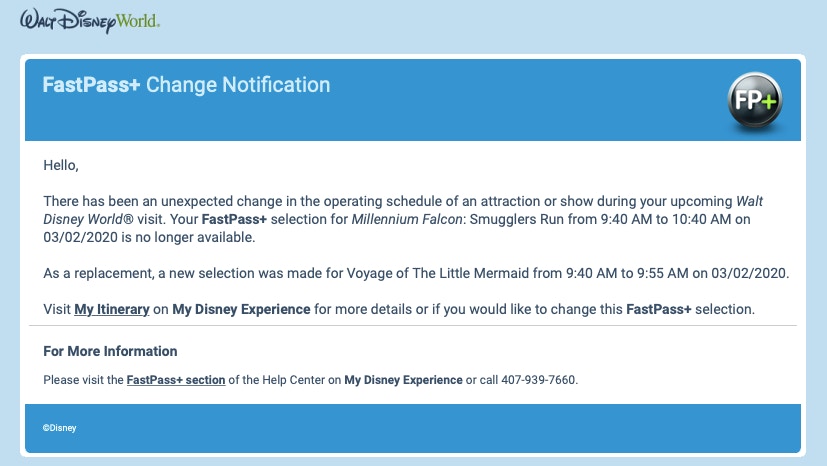 A reader recently messaged us with this alarming email notification they’d received overnight concerning a change to their FastPass+ selections. They were informed that their Millennium Falcon: Smugglers Run FastPass had been changed to none other than a FastPass for… Voyage of The Little Mermaid.

Other reports on social media list odd replacements such as the Disney Junior Dance Party, among others. Even non-Tier 1 options are glitching, as a Toy Story Mania! FastPass for March 3 automatically converted to a Multiple Experience FastPass.

By calling the number on the email, they were able to speak to a Cast Member that in turn changed the odd mystery replacement into a Multiple Experience FastPass, valid for any attraction except Millennium Falcon: Smugglers Run and Slinky Dog Dash. This met their needs and they chose not to escalate further, so it is still unknown what would happen if a guest were to request that their original Millennium FastPasses be reinstated.

It’s likely that the rollout of FastPass+ options for Mickey & Minnie’s Runaway Railway may have effectively derailed the FastPass+ system, causing these glitches. Many of those affected had FastPasses within that initial set of available dates, so double check your current FastPass+ selections and keep a close eye on any random changes.