REVIEW: Every Item on the Menu – An All-American Feast at Regal Eagle Smokehouse: Craft Drafts & Barbecue in EPCOT

Greetings, world travelers, and welcome to the great Centennial Cook-Off! Today is an auspicious occasion at The American Adventure at EPCOT, as Sam Eagle has finally opened the doors at Regal Eagle Smokehouse: Craft Drafts & Barbecue! A salute to ALL cook-offs… but mostly barbecue. Naturally, we felt it was our patriotic duty to try out the offerings this restaurant has to offer! First thing’s first. You can check out our full photo and video walkthrough of the restaurant in this post here. If you’re a Muppets fan, you’re going to love all of the hidden gems throughout the decor. Next up, of course, is merch. You can check out the newly-released Regal Eagle Smokehouse branded items in this post here. Now, grab a paper towel roll, roll up those sleeves, and let’s dig in. And now, for our massive all-American feast! 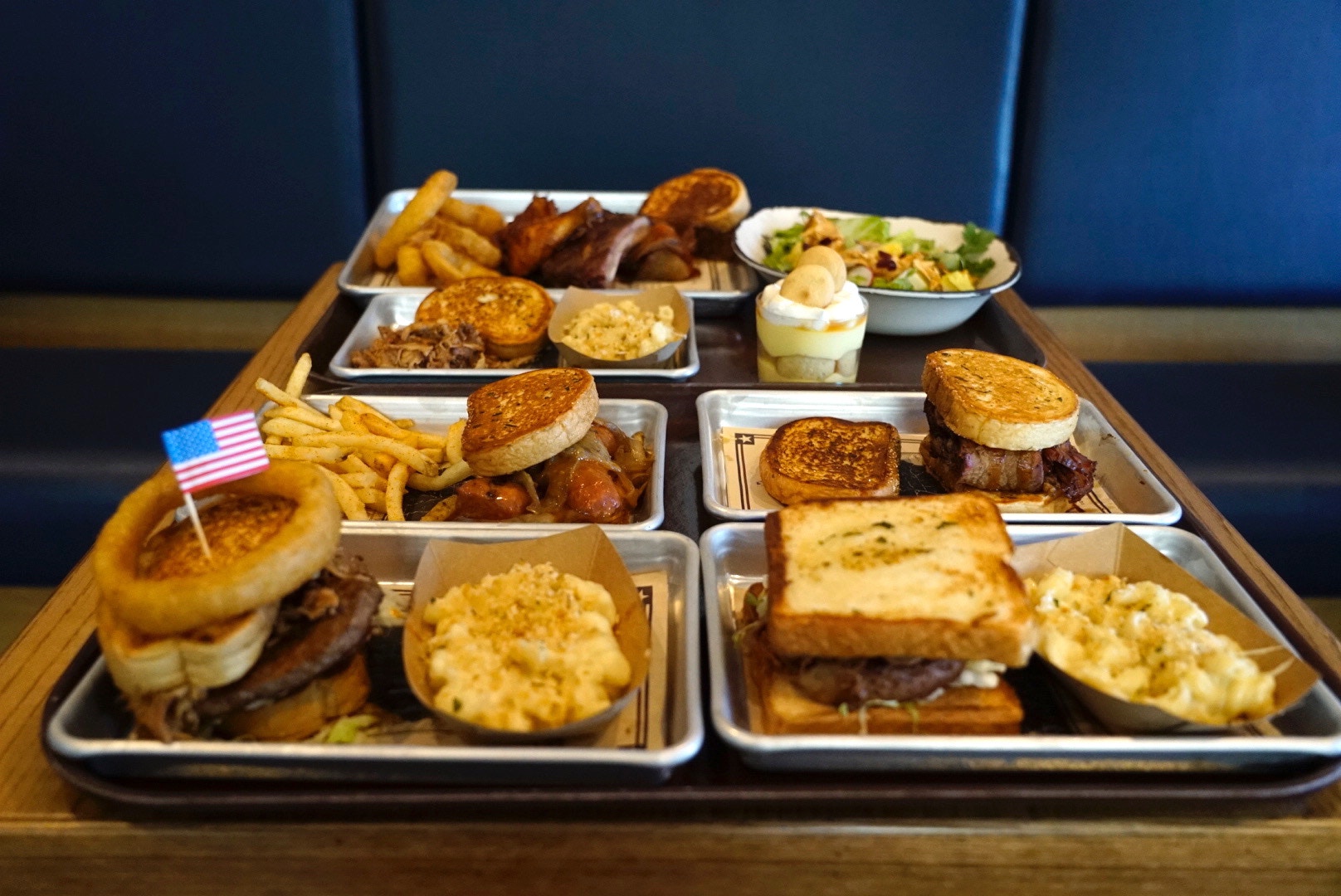 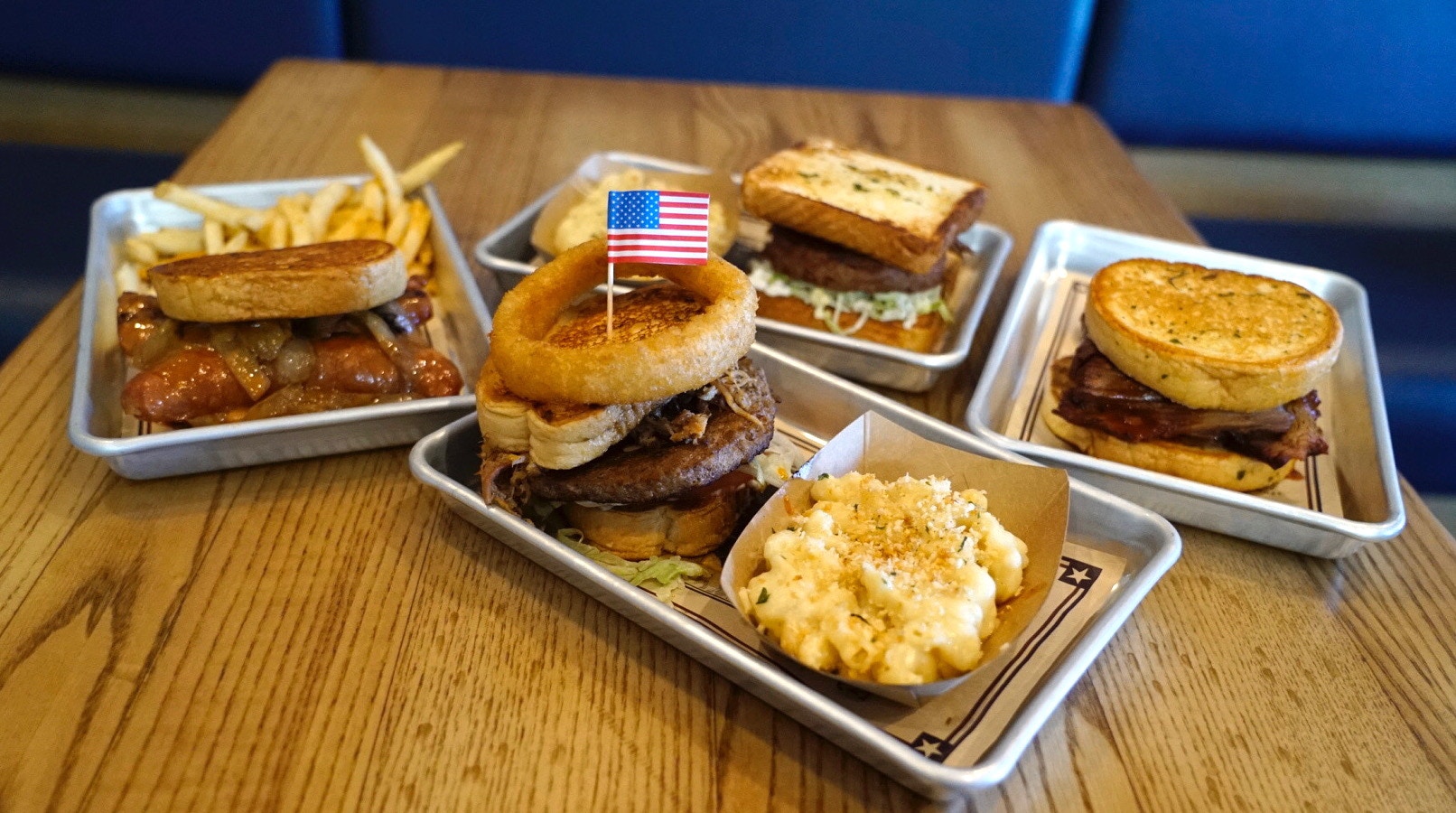 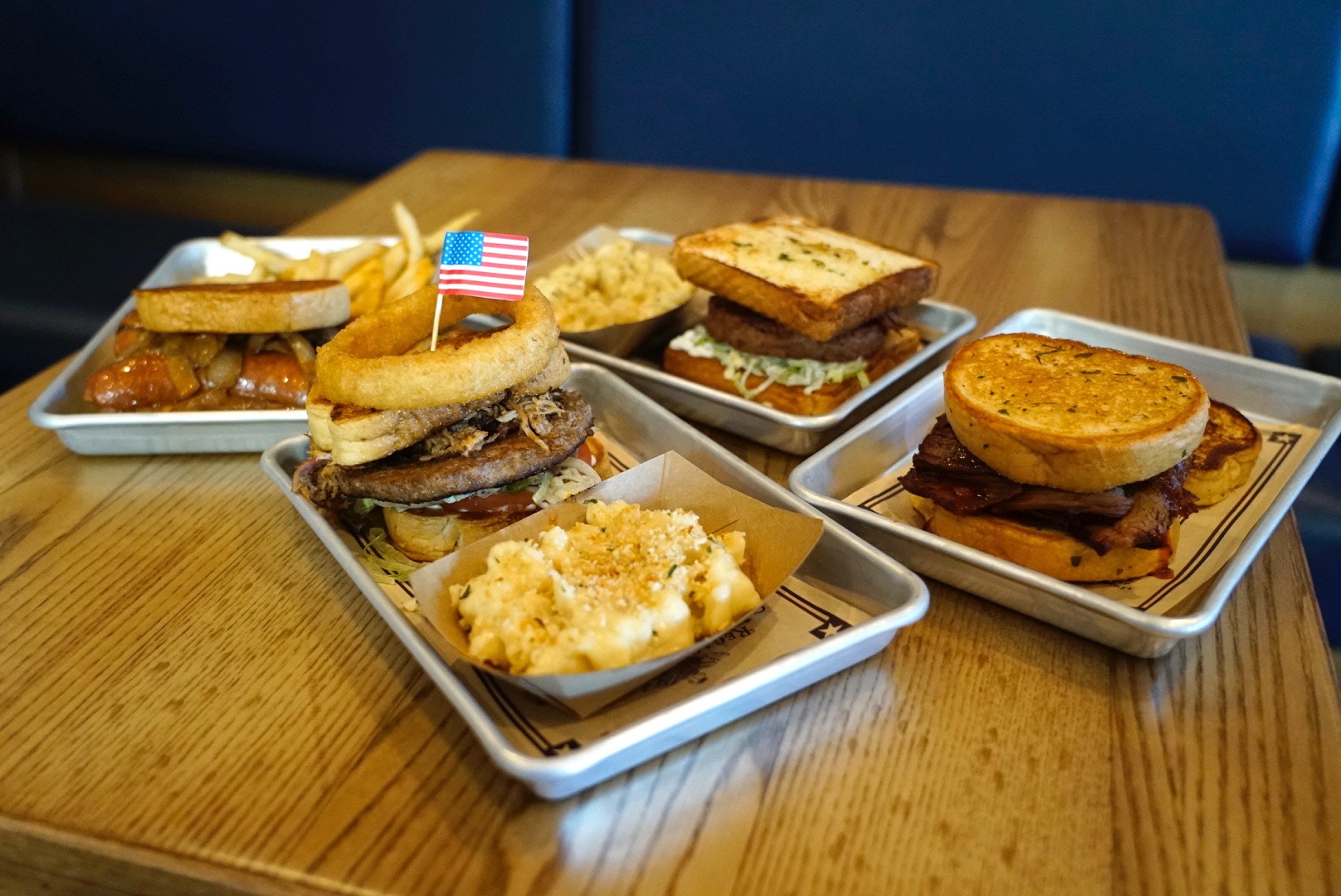 American Platter (Choice of three meats and a side served with Garlic Toast) – $18.99 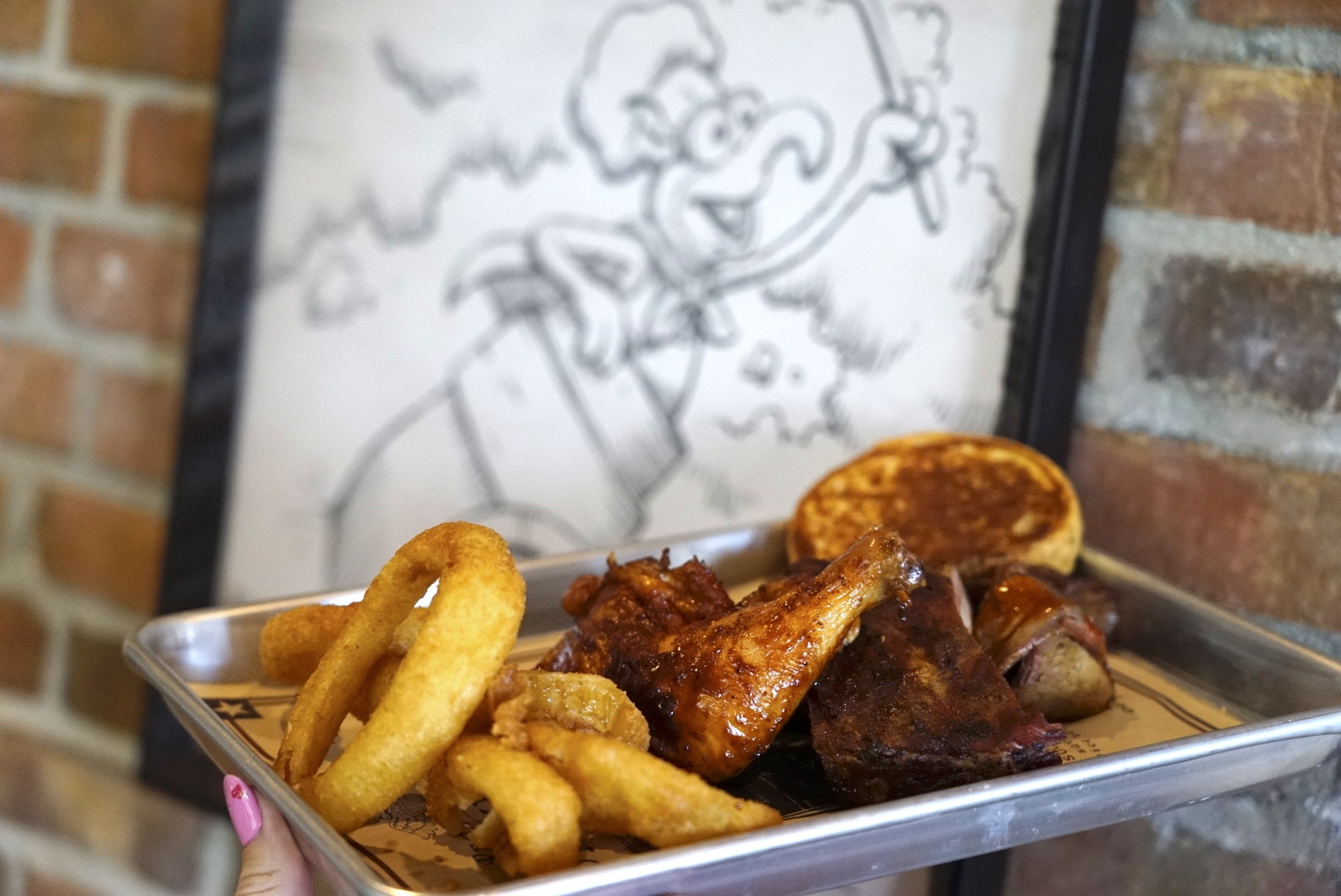 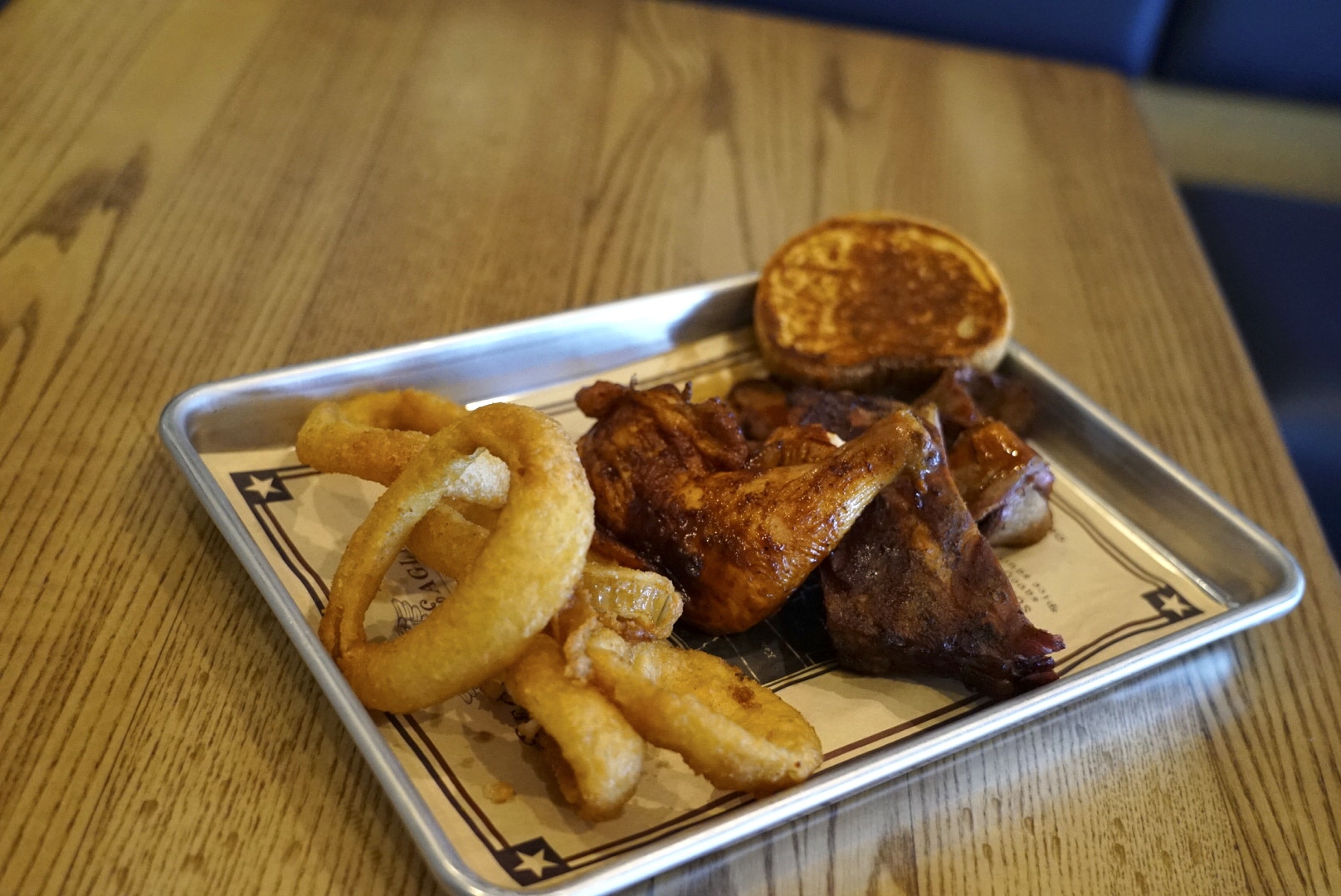 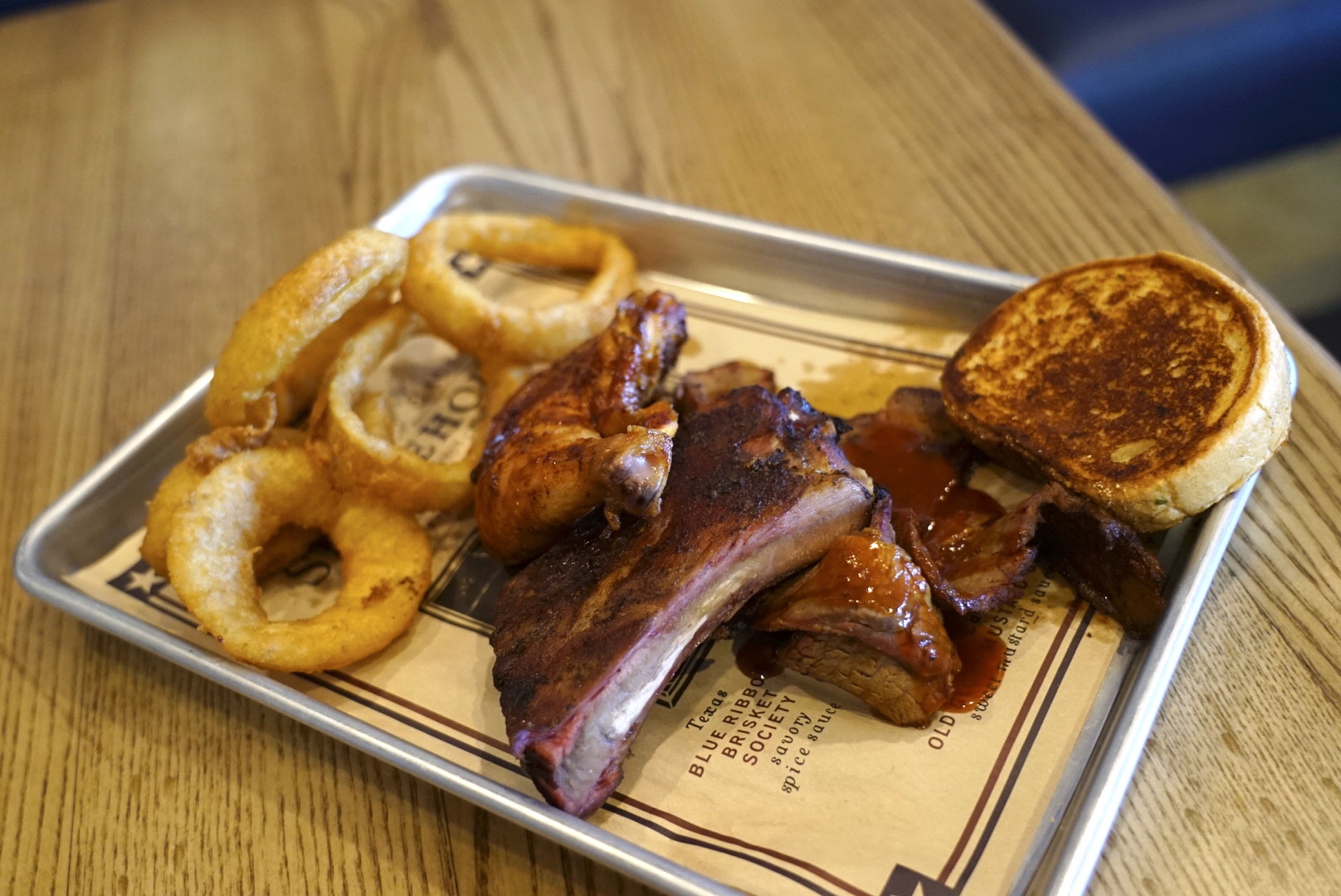 As far as the meats on this platter, you can garner how they tasted based on their stand-alone reviews below. Overall, though, the stand-out had to be the beer-battered onion rings, which everyone loved. 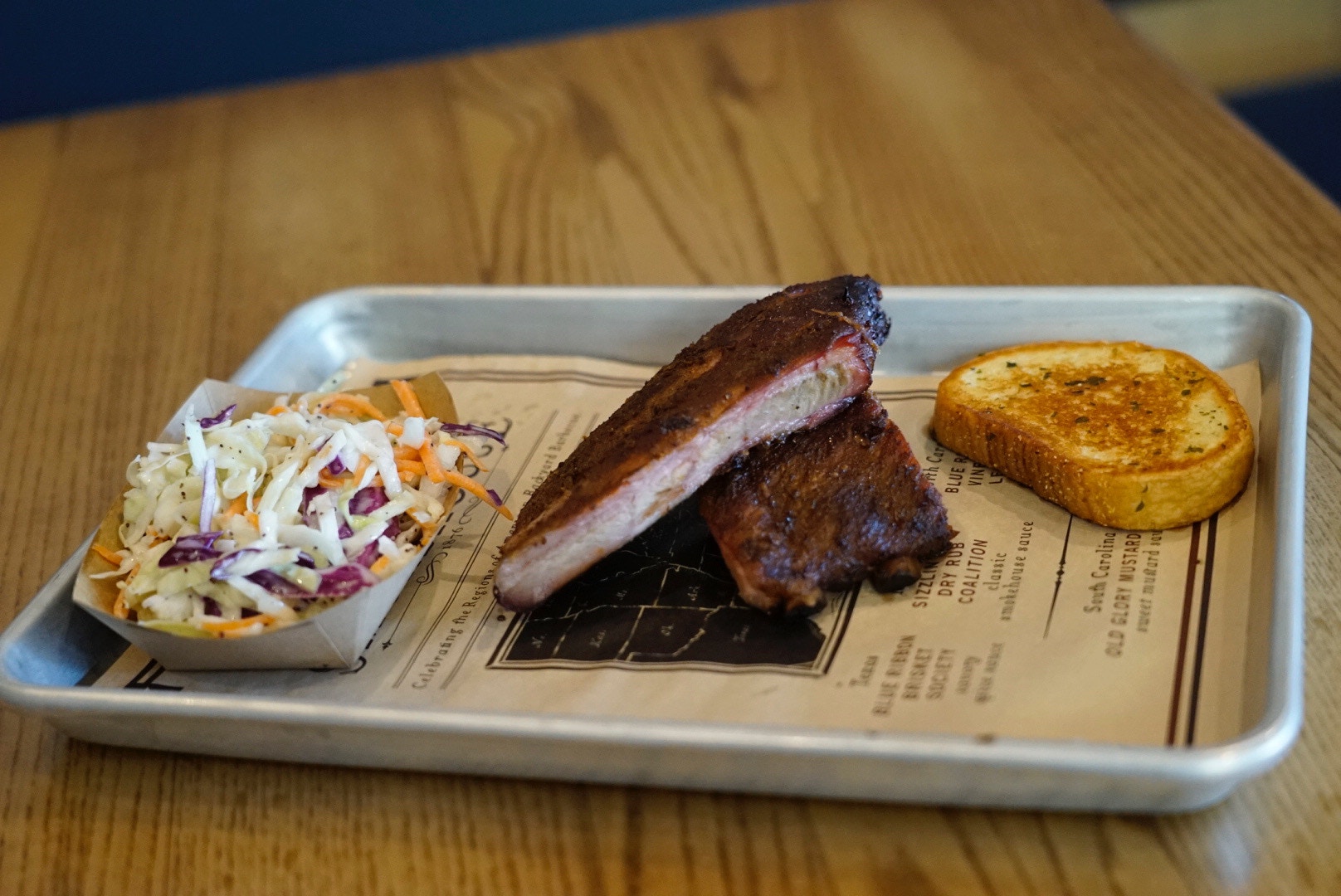 From first glance, the portion size here is pretty paltry, with about four ribs to a tray. (I almost thought it was a kid’s meal at first.) 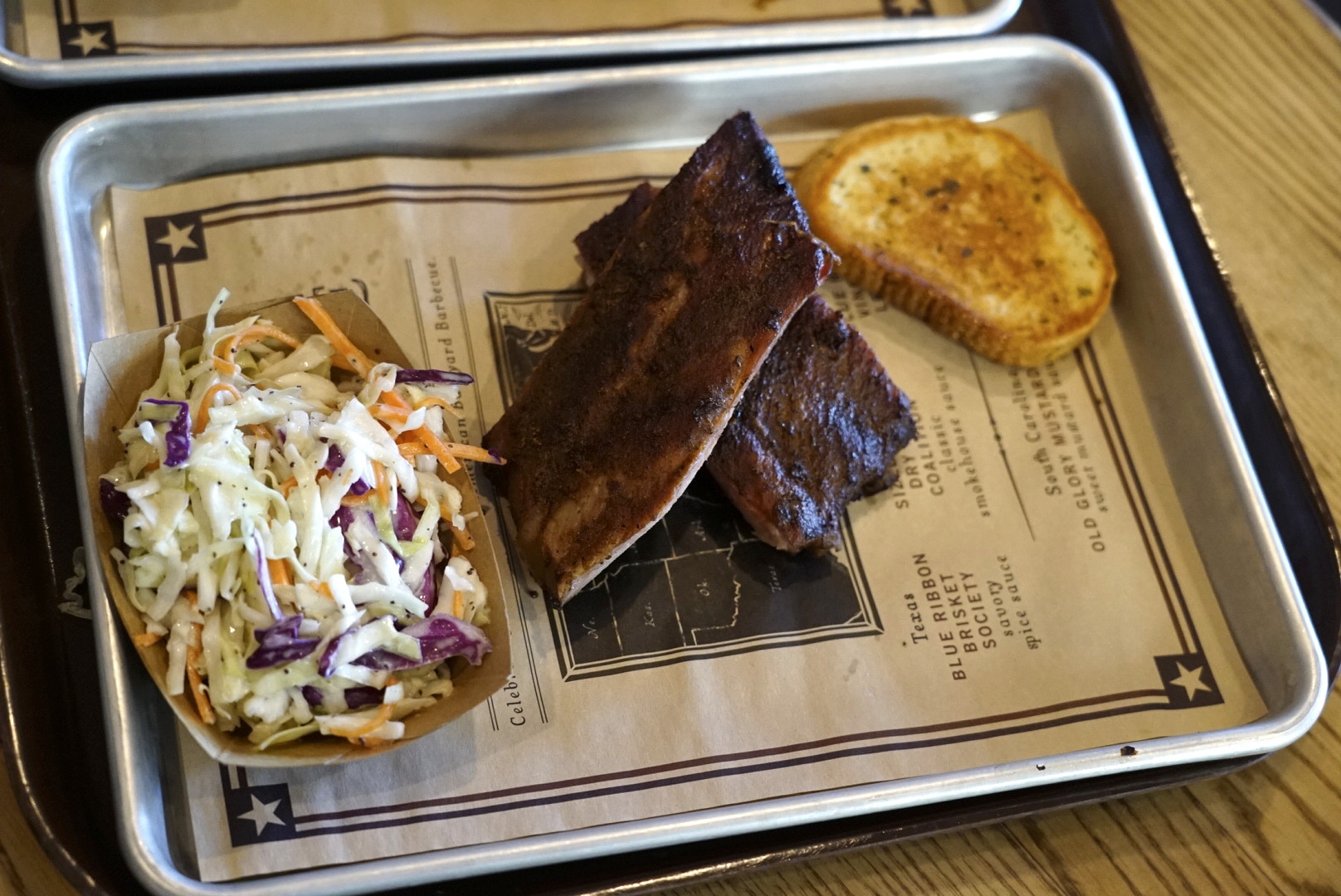 The expectation was for these ribs to be tender, but we found out they were the opposite, with them being dry and having no flavor. There was also far too much cartilage on these, and not enough meat. The coleslaw was boring. Not much to say about it, but every other side was seemingly better. 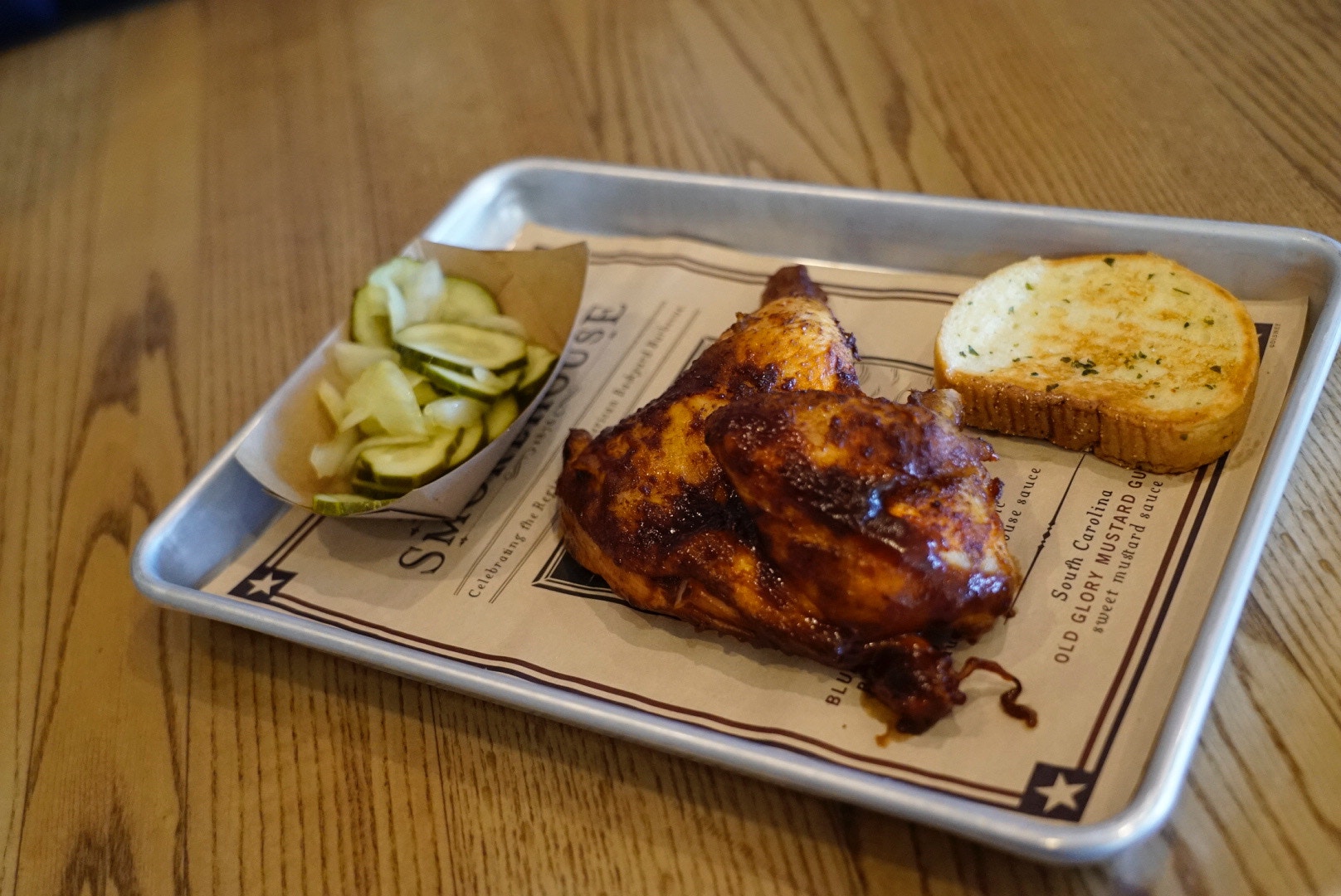 Chicken is very flavorful without any additional sauce. The skin gives off a real smokey flavor, too. Texture-wise, the chicken was also juicy and tender. The pickles weren’t as exciting as we expected. They’re house-made, but nothing exciting. They’re not spicy or sour, just basic pickles.

BBQ Burger (1/3 lb Angus Burger on Garlic Toast topped with BBQ Pork and Fried Onion Ring served with your choice of side) – $13.49 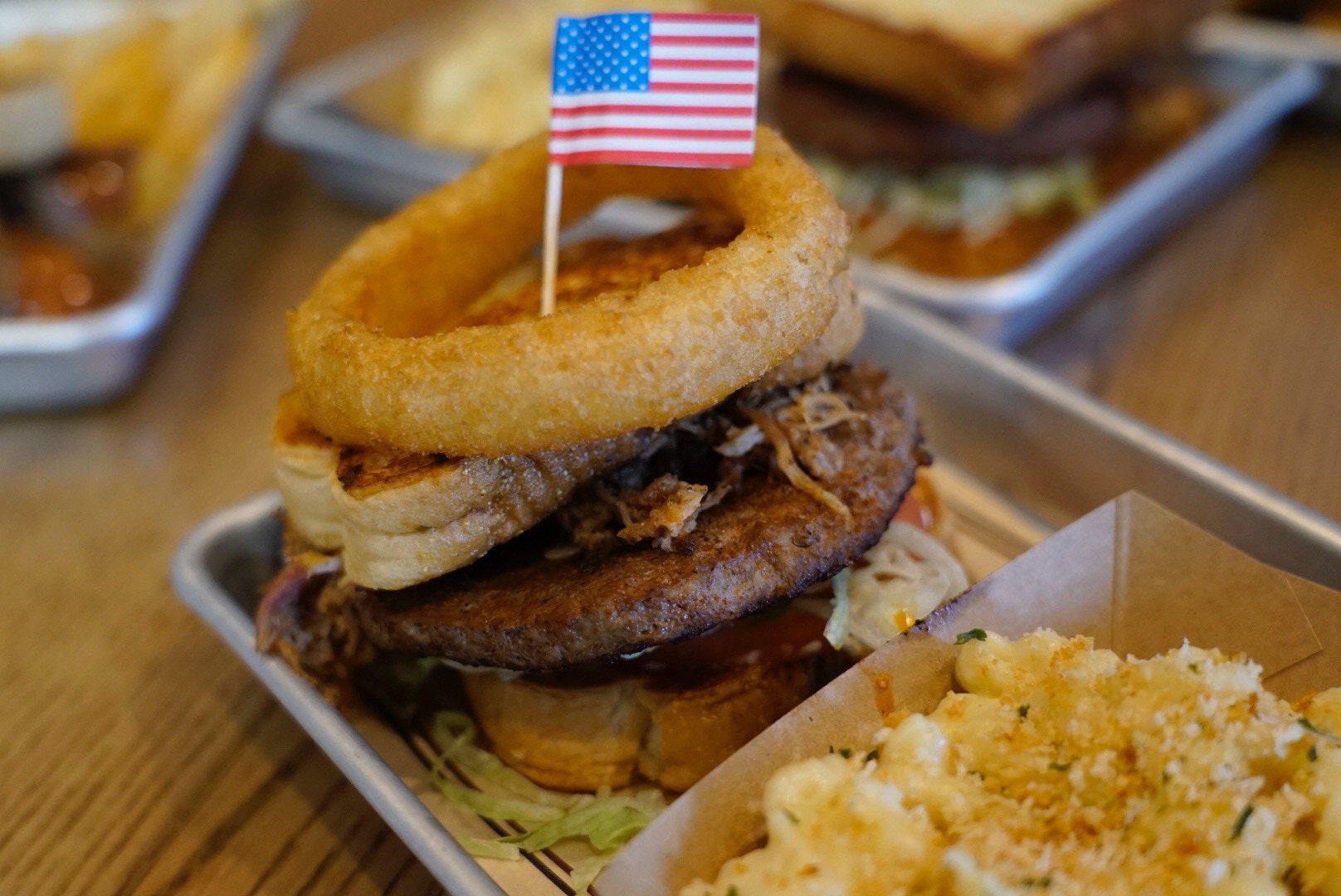 The BBQ Burger is a burger patty topped with pulled pork and served between two slices of garlic toast. A giant onion ring and tiny American flag top off this classic combo. There’s also lettuce, tomato, and garlic mayonnaise on top. There seems to be a little bit of sauce already on the pork, but it seems like they leave it a little plain intentionally so you can add some of the delicious sauce options. 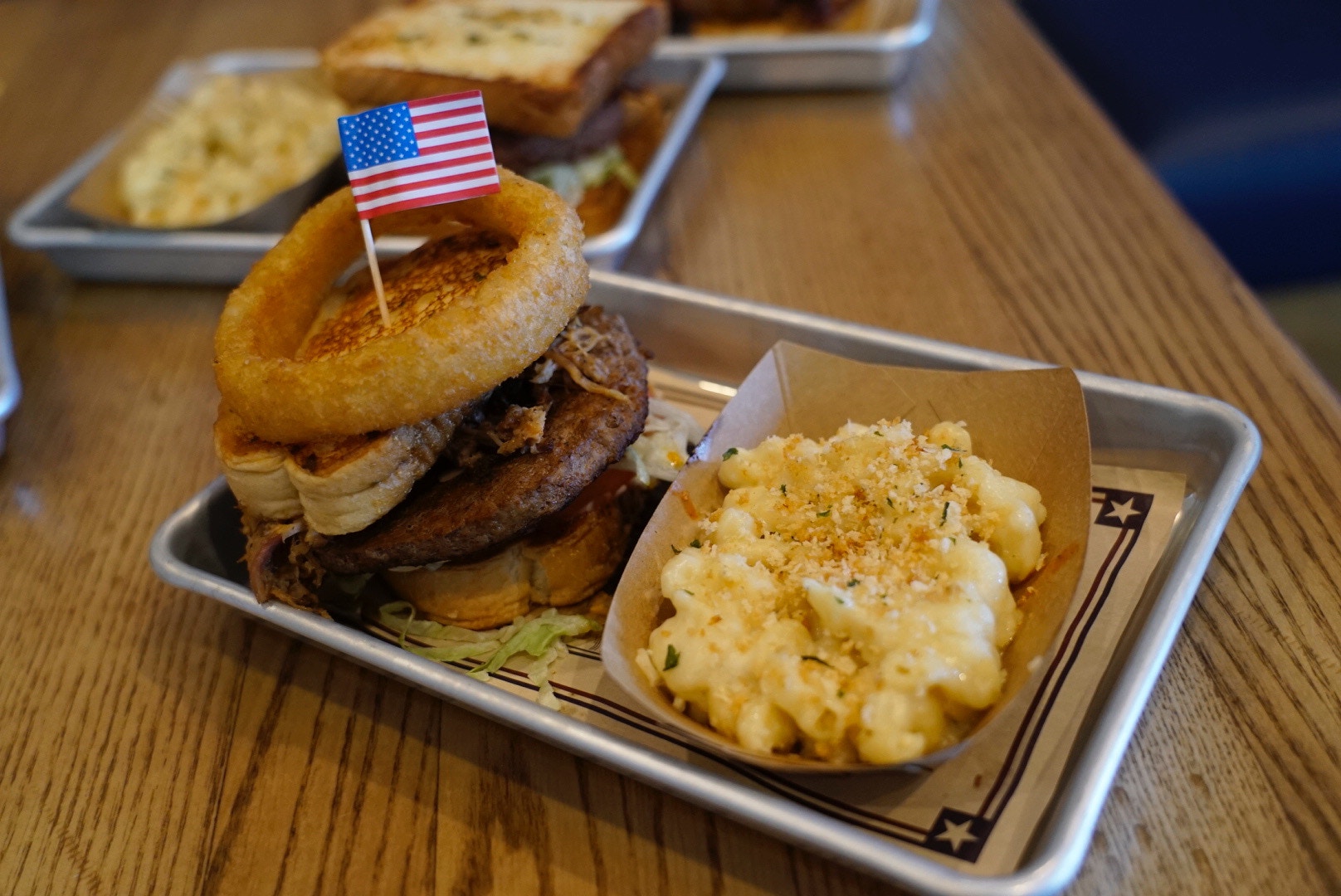 We loved trying out the variety of sauces on the burger and pulled pork and really couldn’t decide on a favorite. The garlic toast is delicious and gives a nice flavor and crunch to the burger. This is a great knife-and-fork sandwich. You get your choice of side and we went with the baked macaroni and cheese. It’s creamy with a crunch from a plentiful amount of breadcrumbs. I would come here just for this mac and cheese. 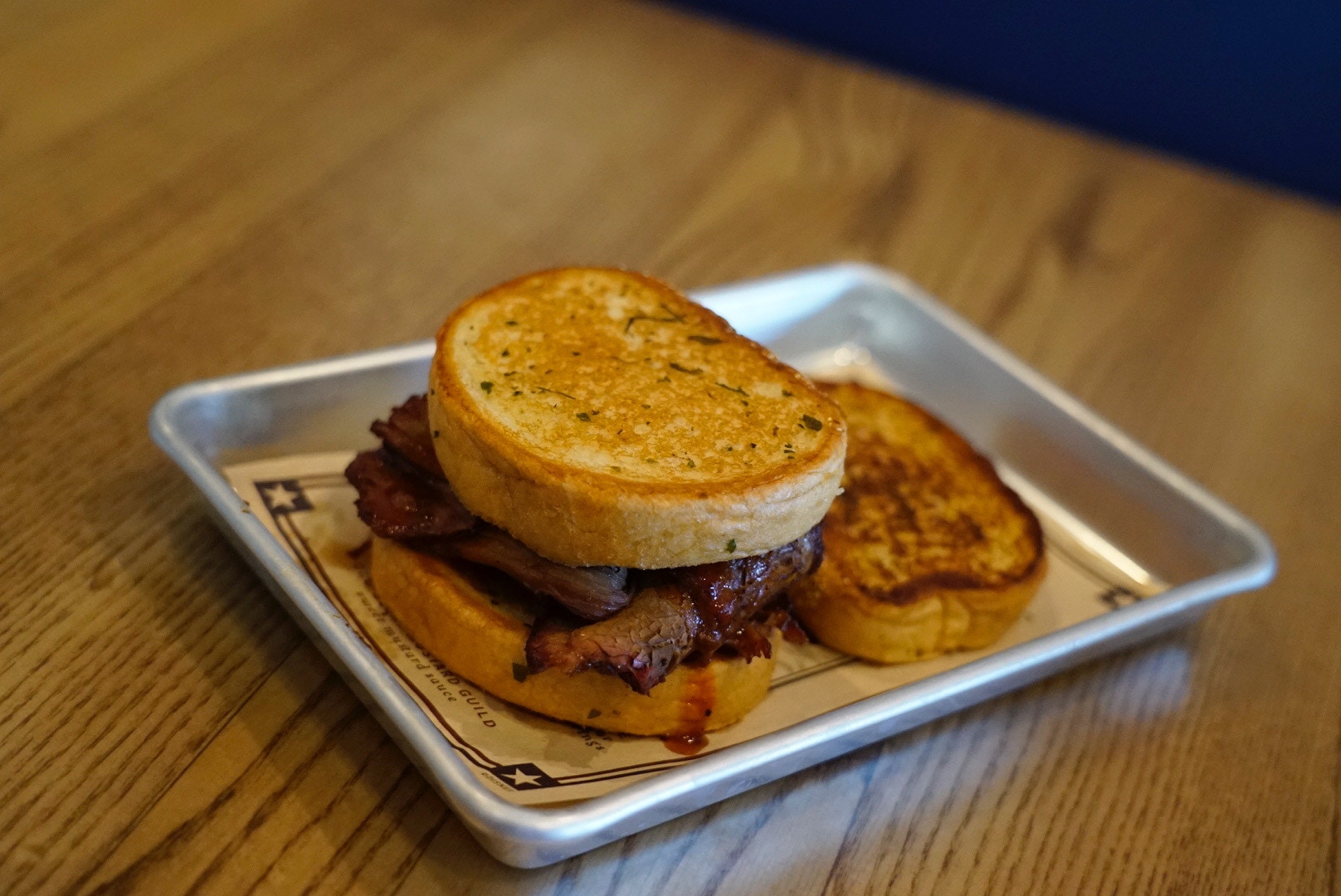 The brisket sandwich was definitely juicy, and the use of garlic toast as the bread added an extra level of flavor and butteriness. Some of the pickier eaters in our group who enjoy barbecue meats, but are generally wary of them being drenched in sauce, still enjoyed the flavor that came through with these dishes. 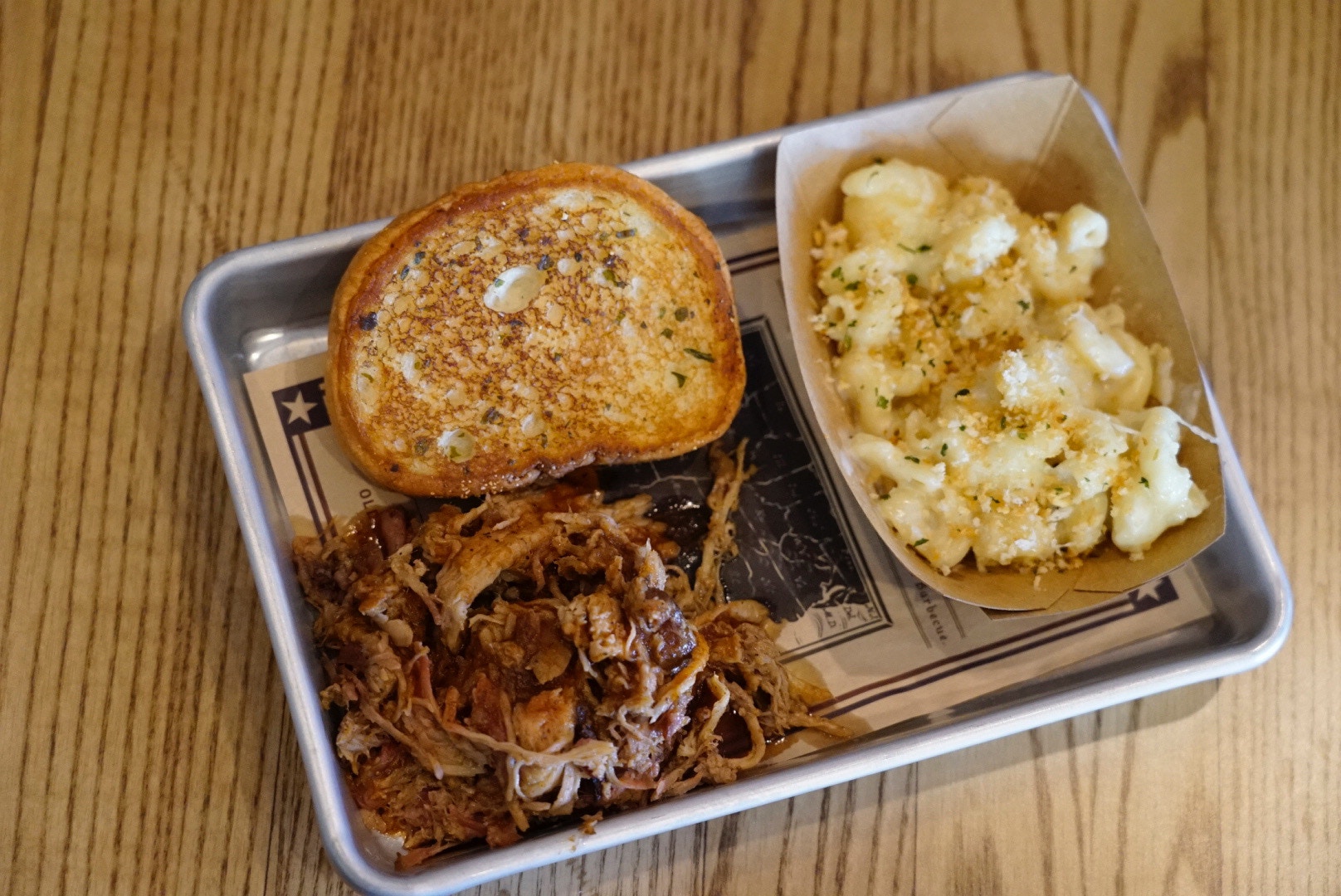 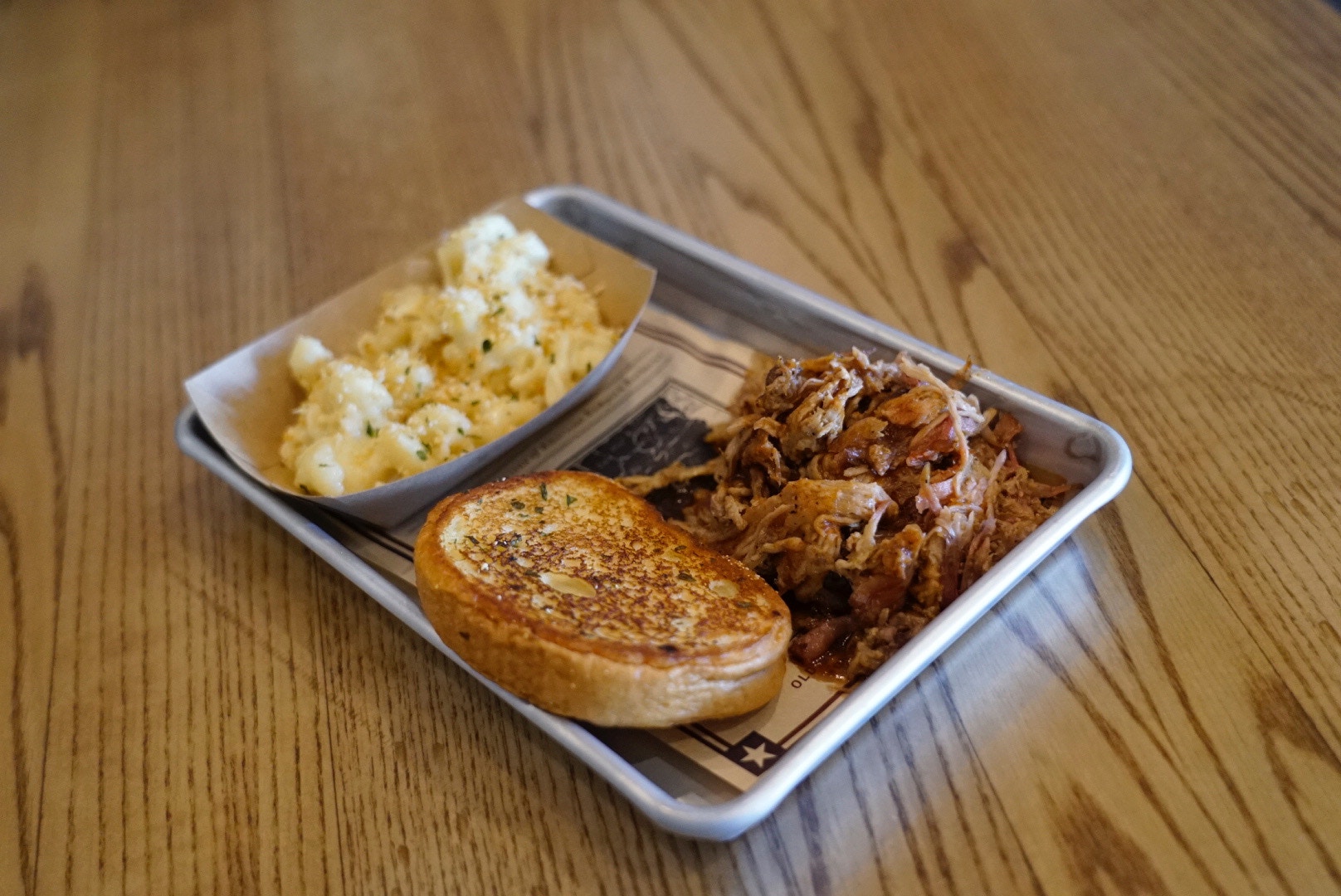 The pulled pork was juicy and had good flavor. It went great with the Classic Smokehouse Sauce. It was a little disappointing that all of the bread for the entrees was the same garlic toast. 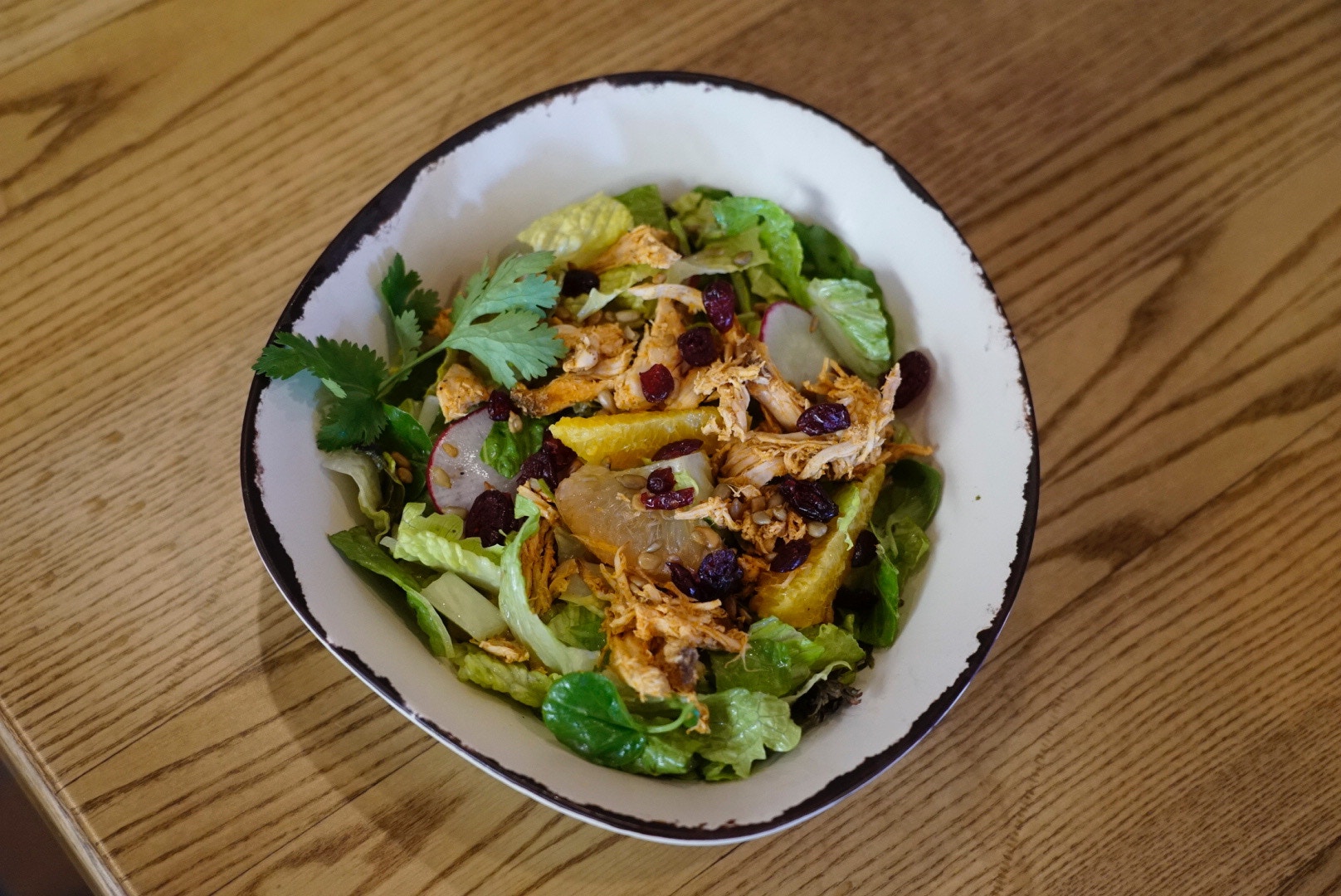 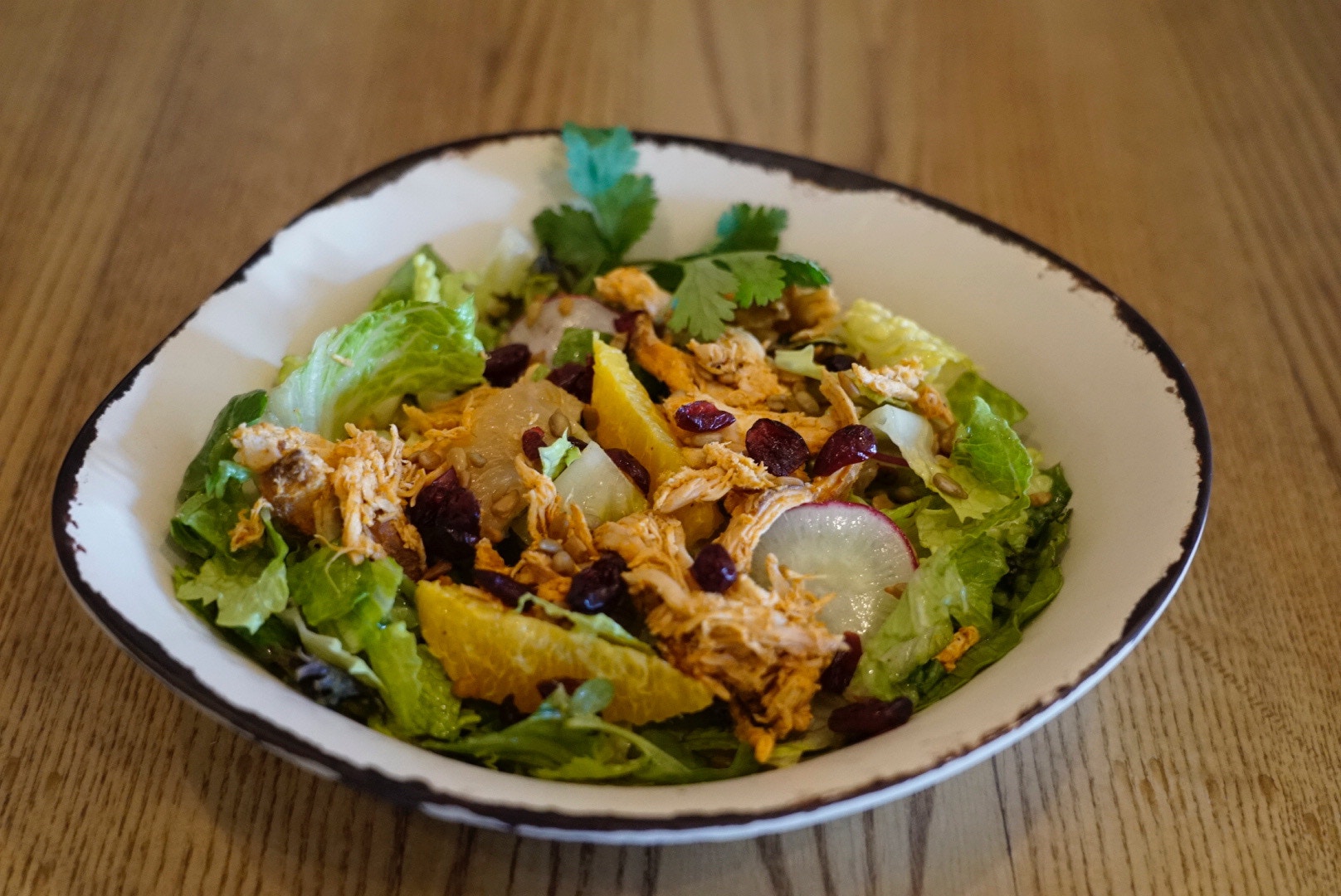 The salad was crispy and extremely fresh. The ingredients were well thought-out to have contrasting textures and flavors. The chicken was also seasoned with a mild and savory spice. The salad is also bursting with perfectly juicy citrus like grapefruit and orange segments. The salad base featured a nice variety of greens, including varieties like watercress that we don’t see very often in counter service salads. The pumpkin seeds and cranberries also gave good contrast, with some crunch. Overall, this is an excellent option, and a large portion, to boot. 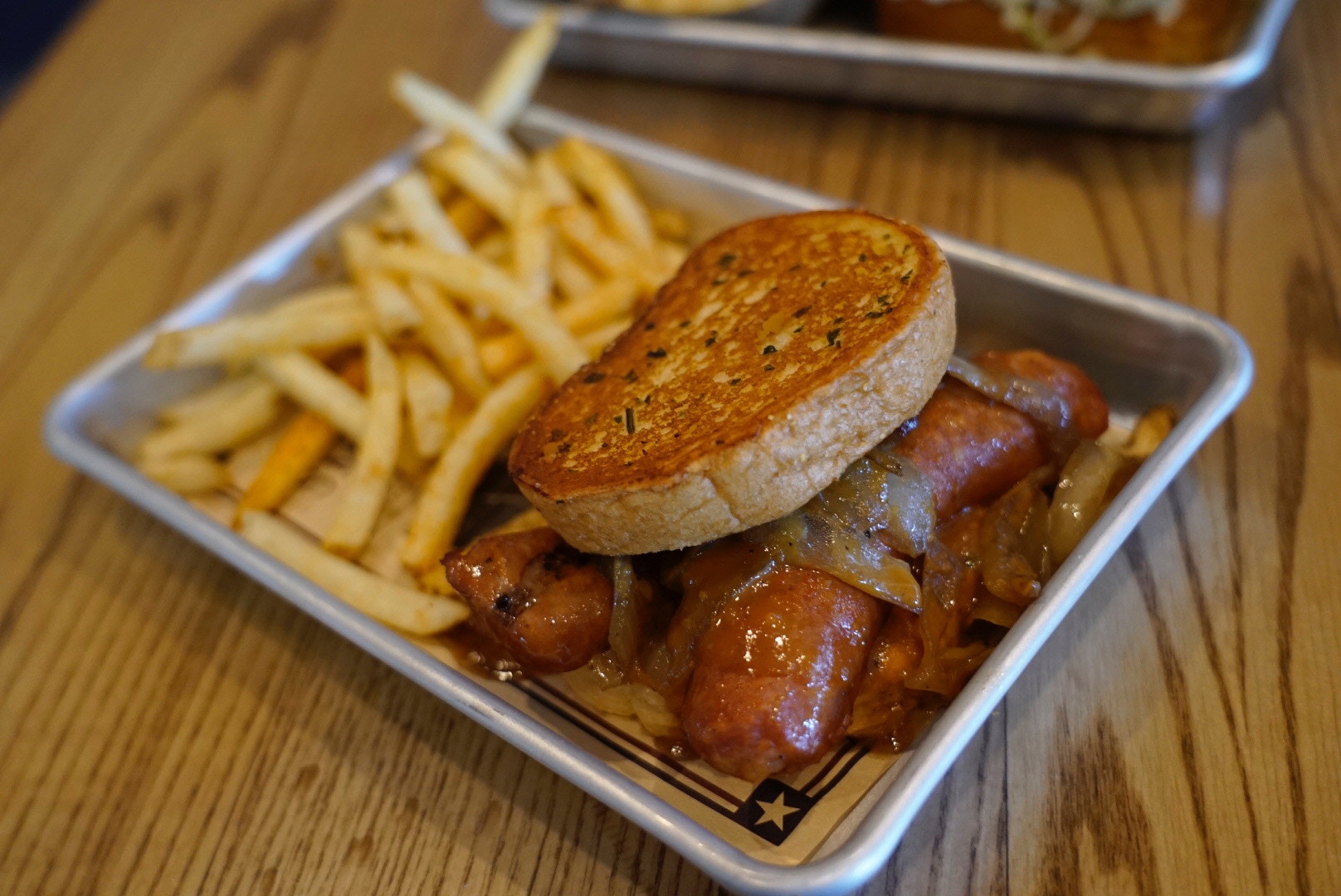 The South Carolina Smoked Sausage sandwich was really good. The meat has a nice mustard based sauce that brought out a lot of flavor. There’s a thick layer of caramelized onions that are thoroughly coated in sauce. The sausage was okay, but the sauce and bread make a big difference. This one we ordered with a side of fries. They’re thin, but nicely seasoned, almost like a BBQ rub flavor, and not your typical Disney fries.

BBQ Jackfruit Burger (Plant-based Burger on Garlic Toast topped with BBQ Jackfruit served with your choice of side) – $12.99 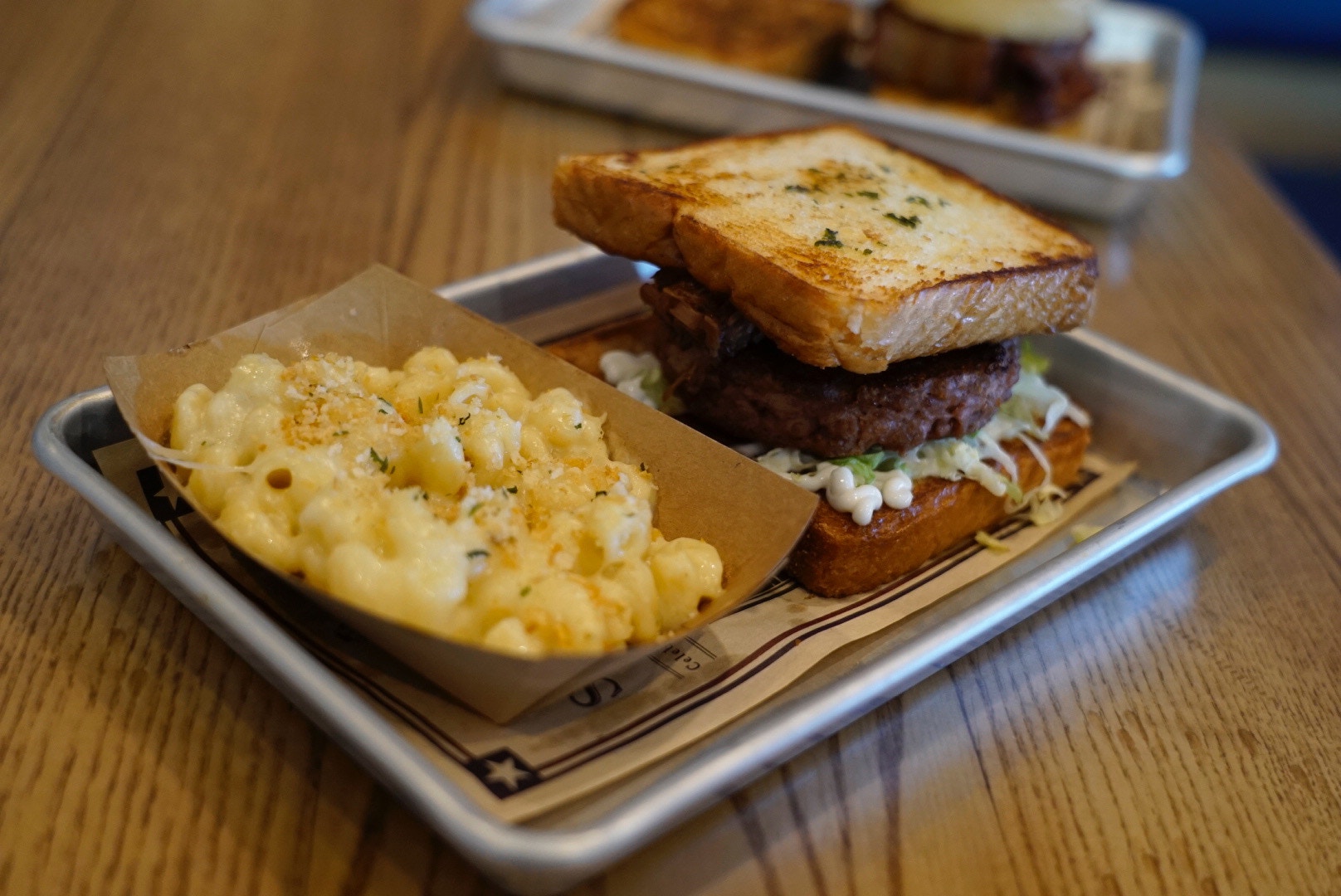 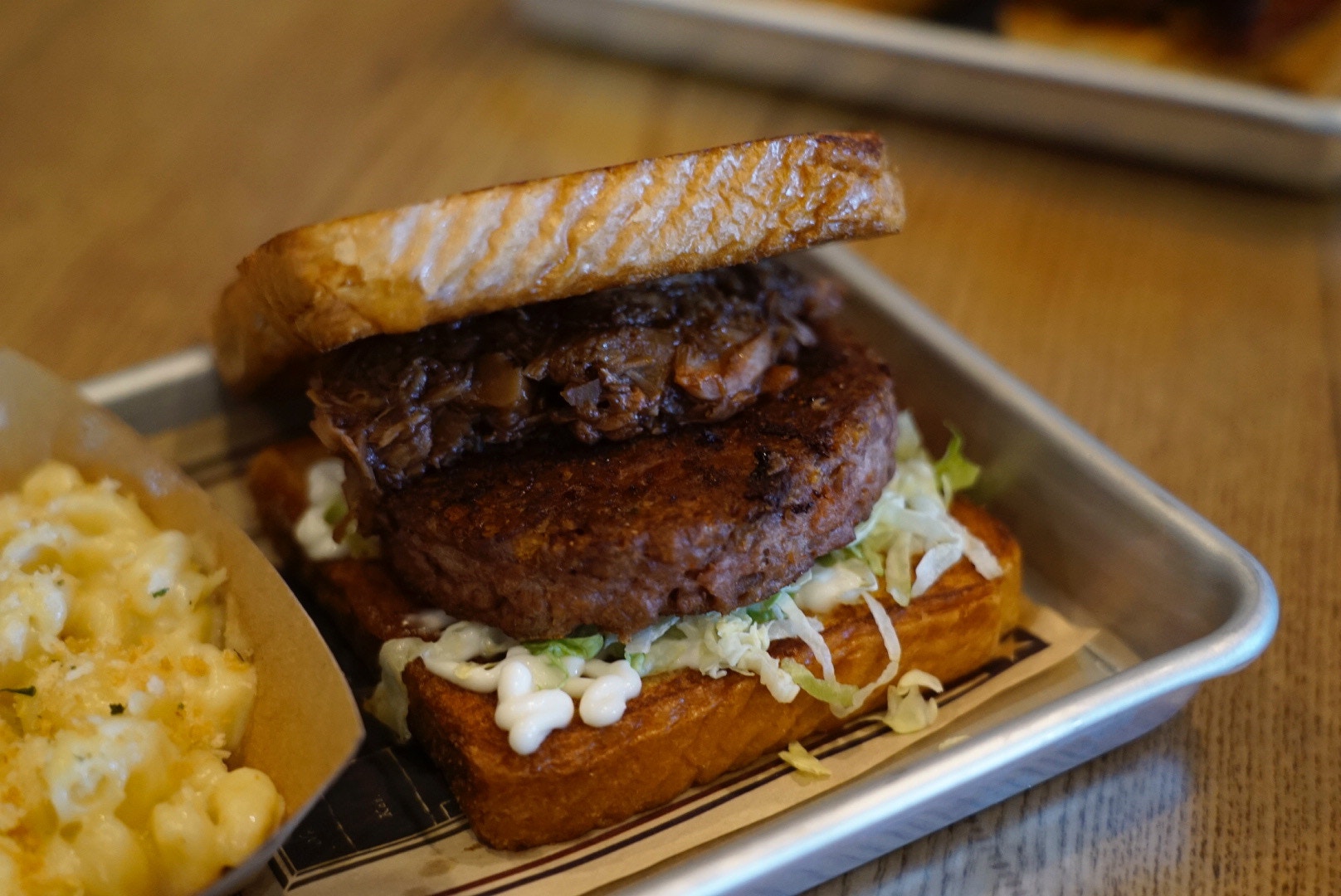 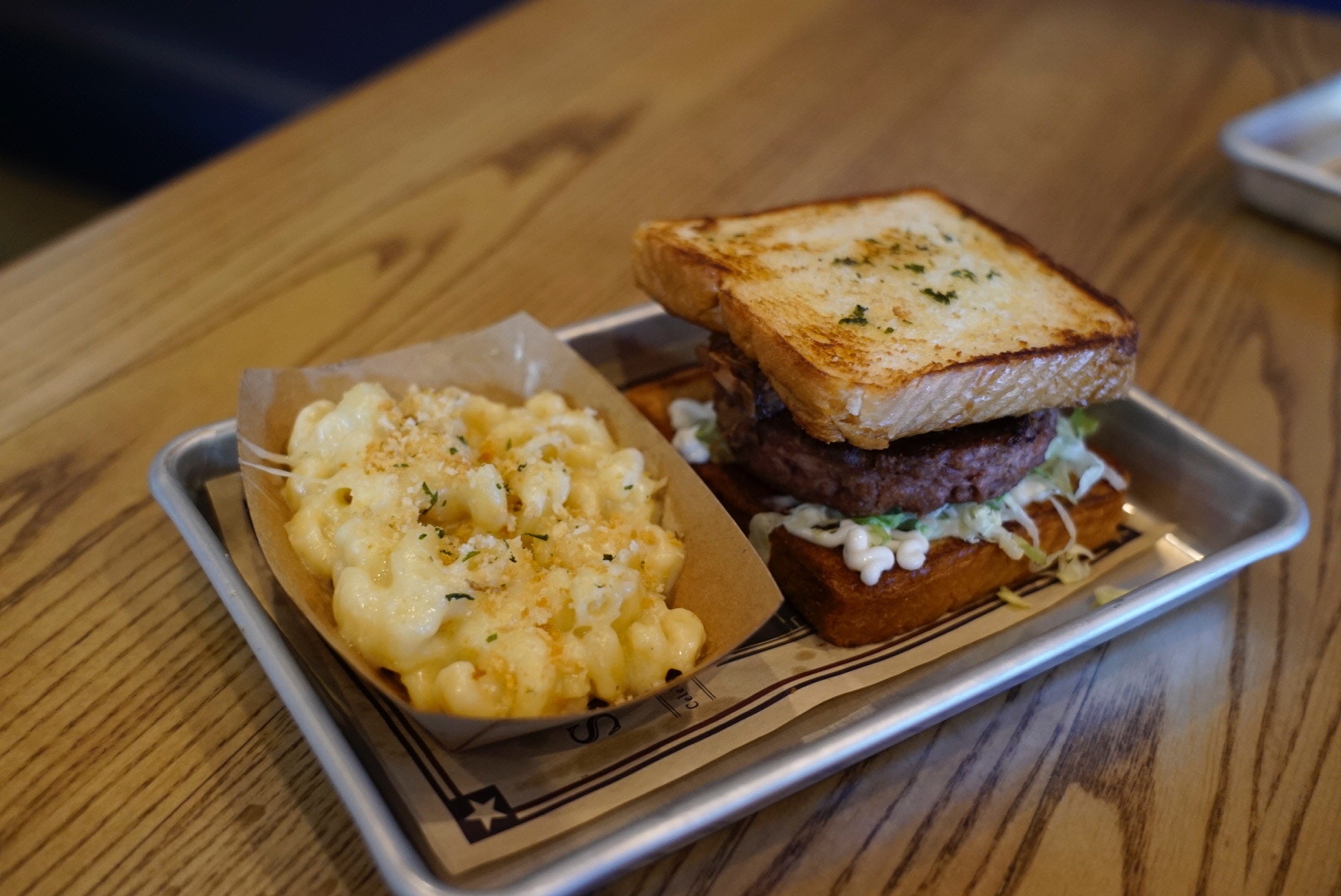 The burger was interestingly enough made out of beet juice extract and pomegranate fruit powder, topped with jackfruit glazed in BBQ sauce, acting as a substitute for pulled pork. The garlic mayo on this was also very good. The only issue we encountered was biting into it, as the burger fell apart. The BBQ baked beans were flavorful and the burnt ends added such great taste and texture to the dish. The chunks of burnt ends werent big, but was cut perfectly to blend well with the beans to add a wonderful surprise in every bite. 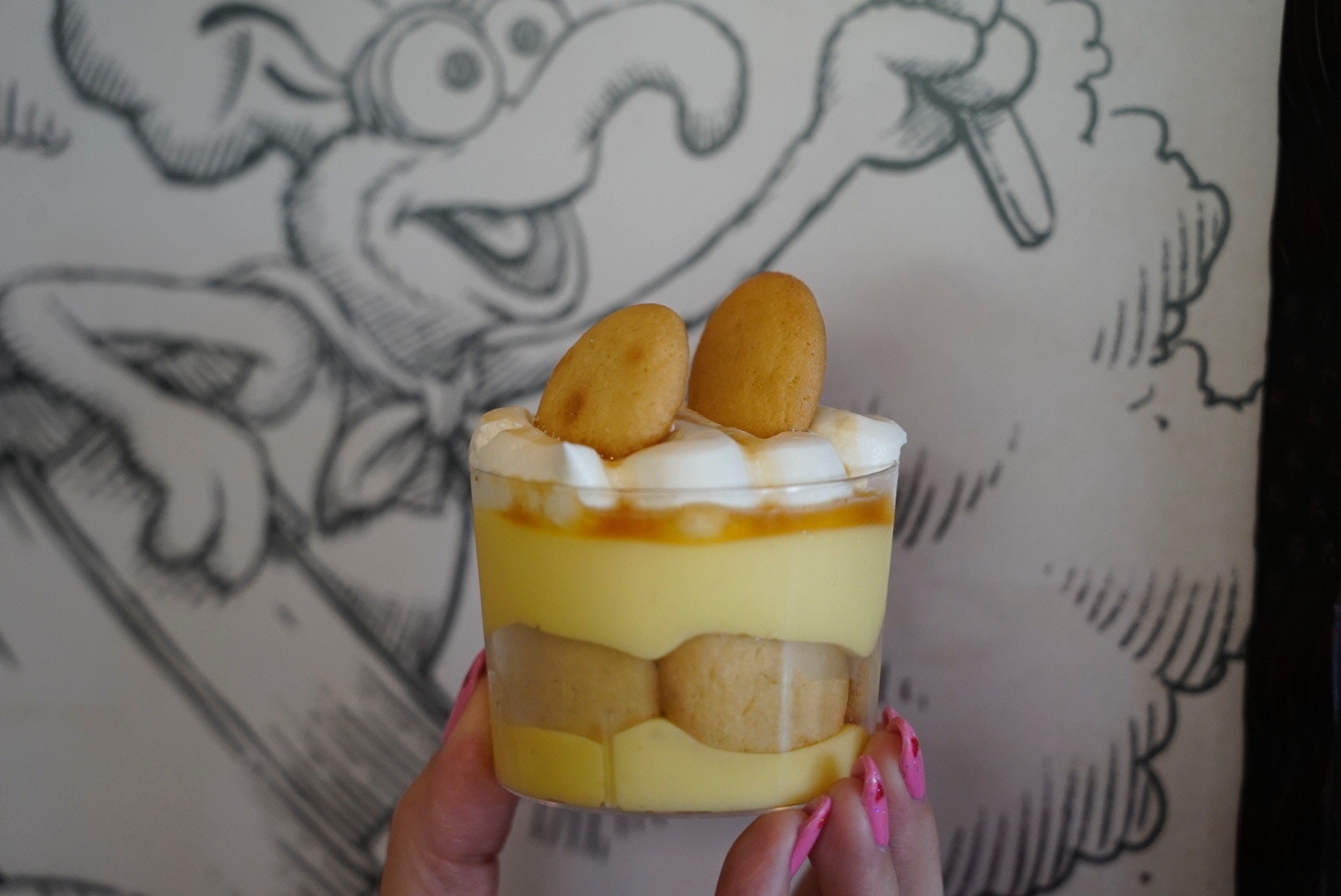 The banana pudding was surprisingly delicious. It was creamy with chunks of banana, cake, cookies, covered in whipped cream. 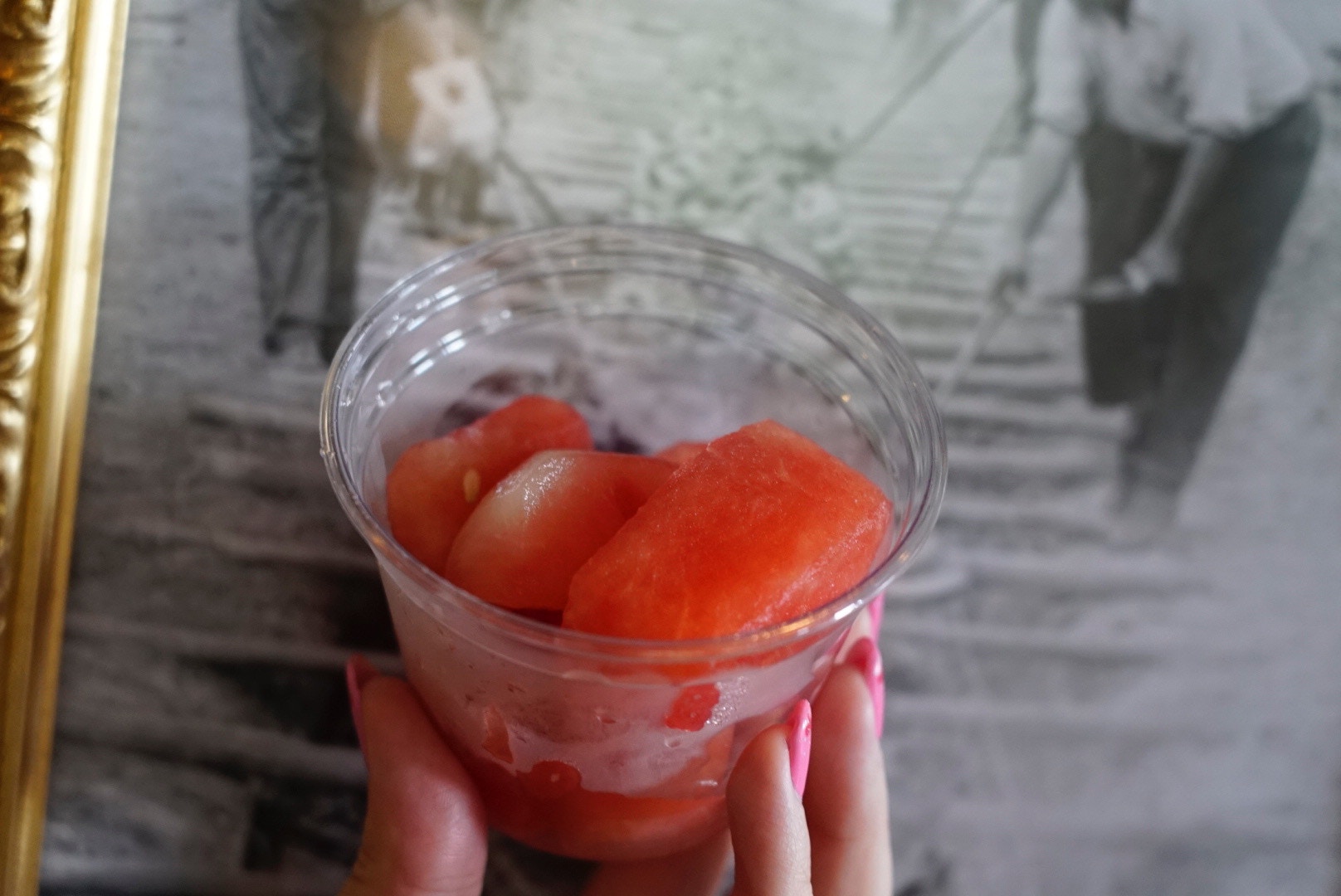 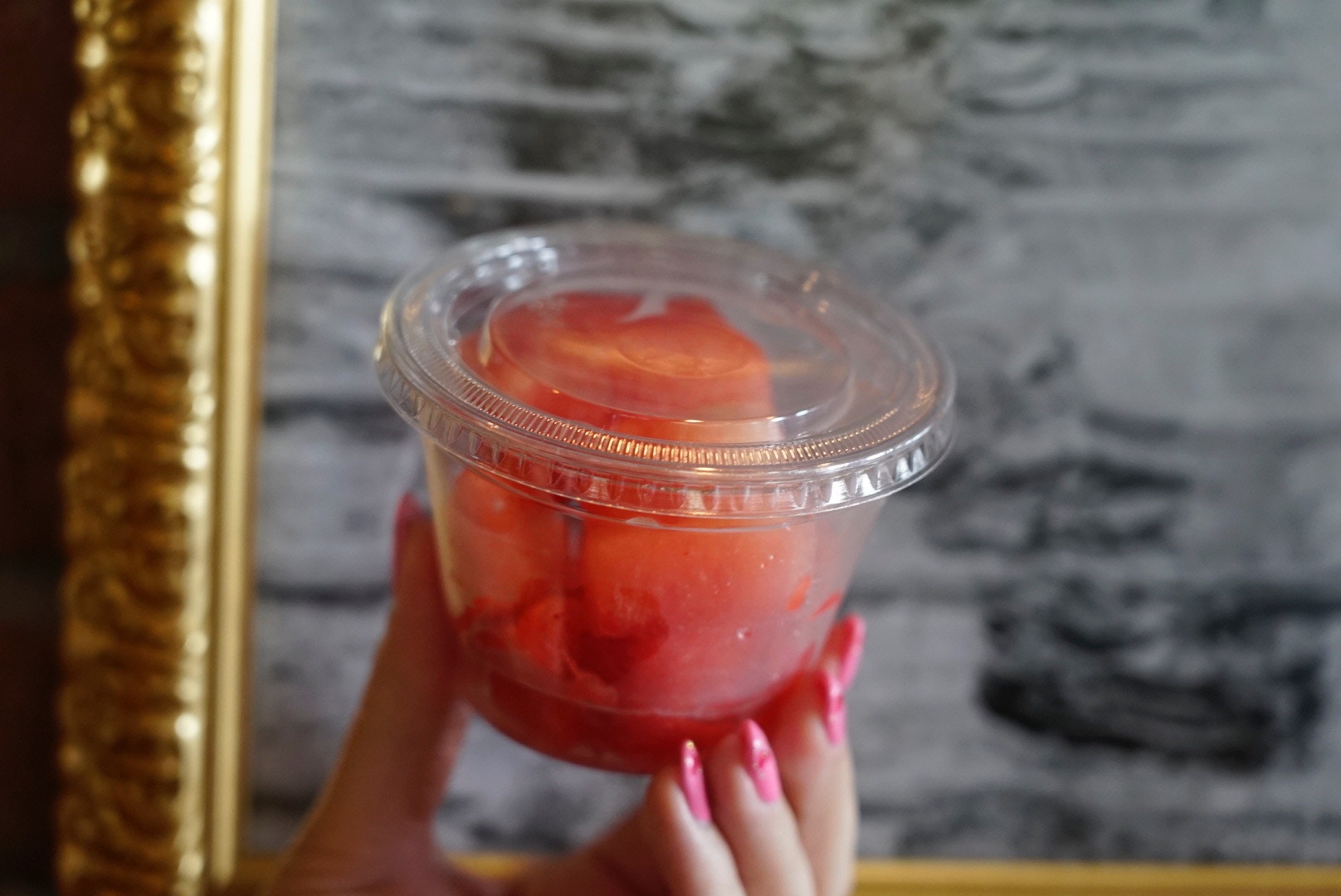 This watermelon cup “dessert” was fresh, but we’d be hard press to recommend paying $4.99 for a small cup of cut-up watermelon. 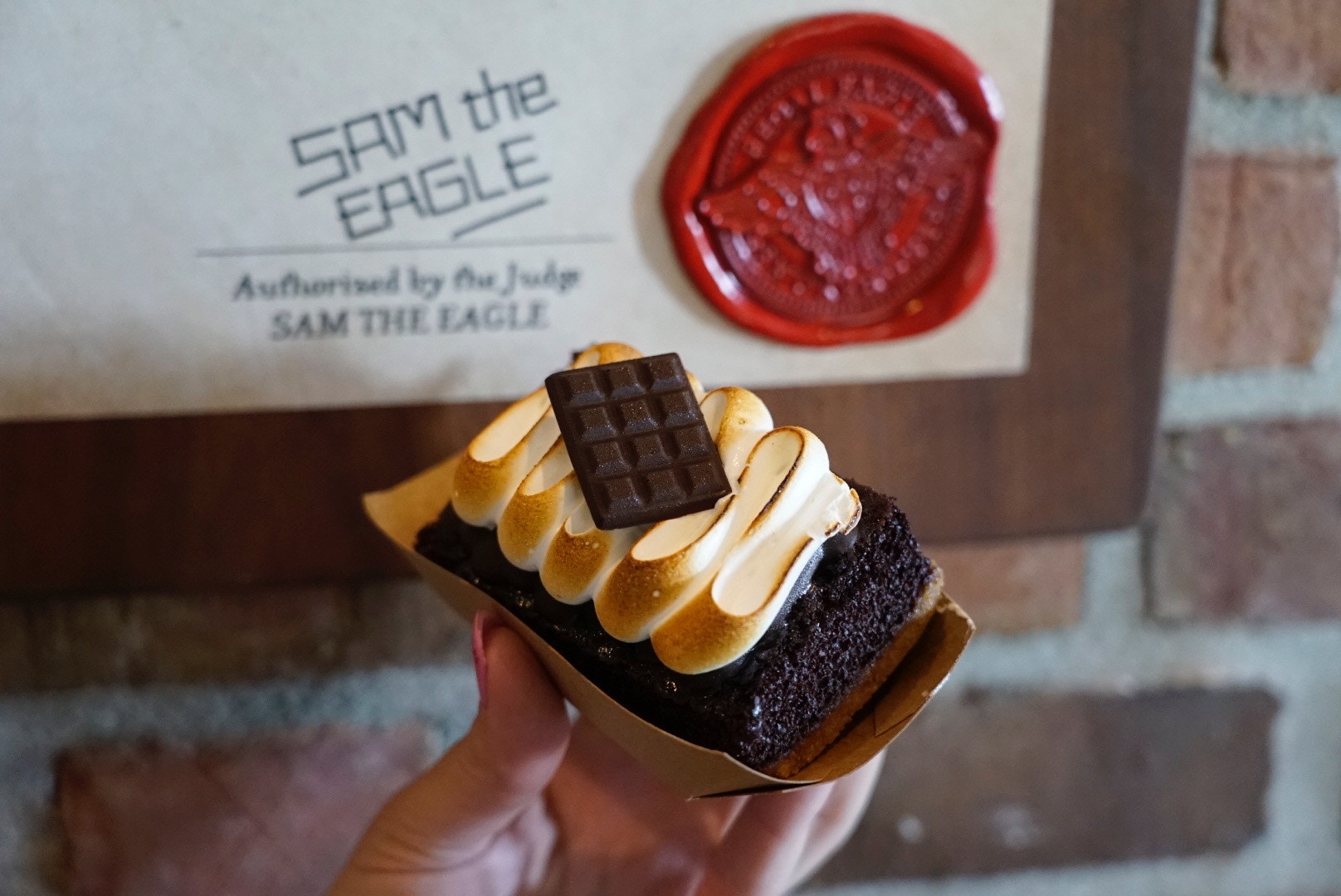 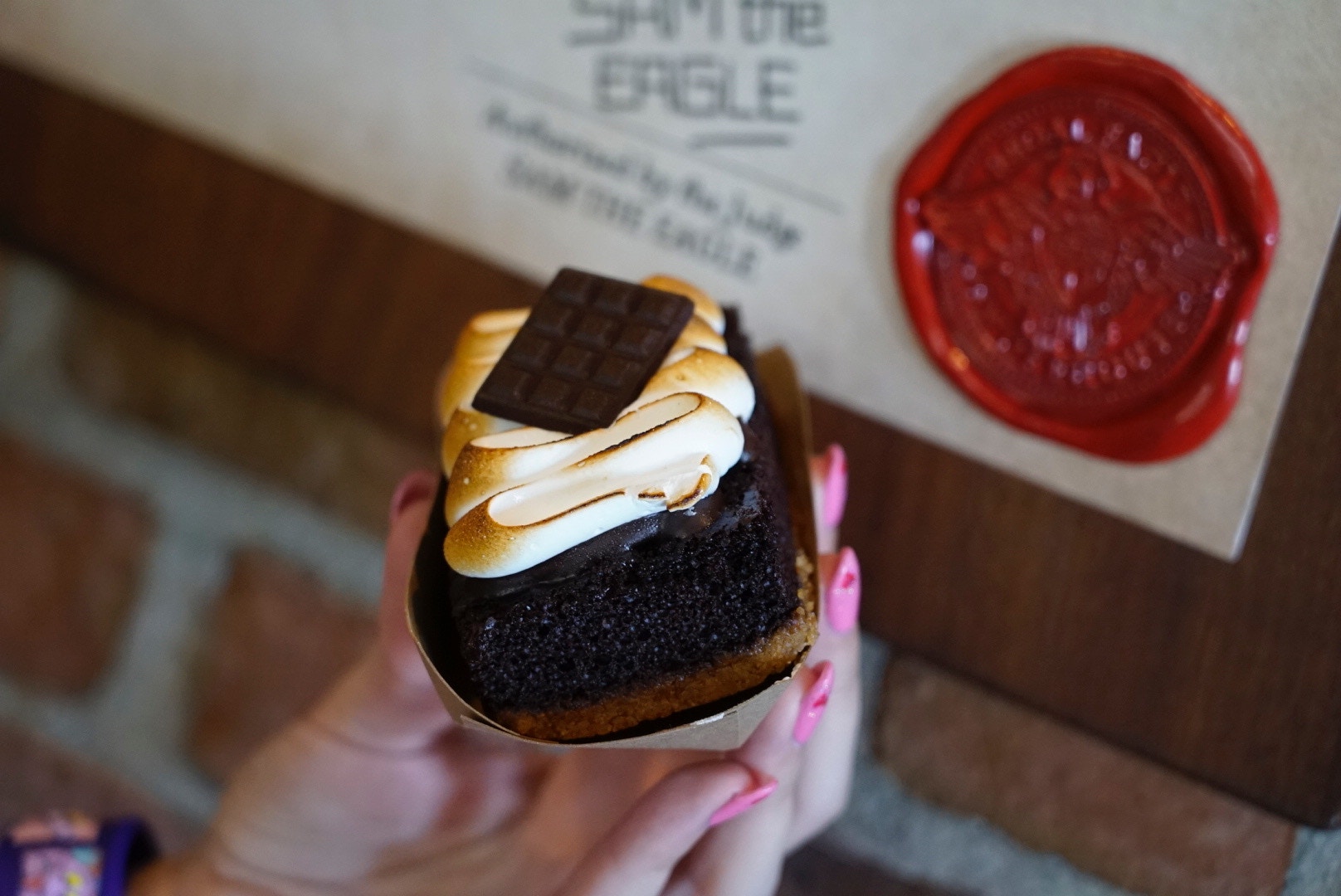 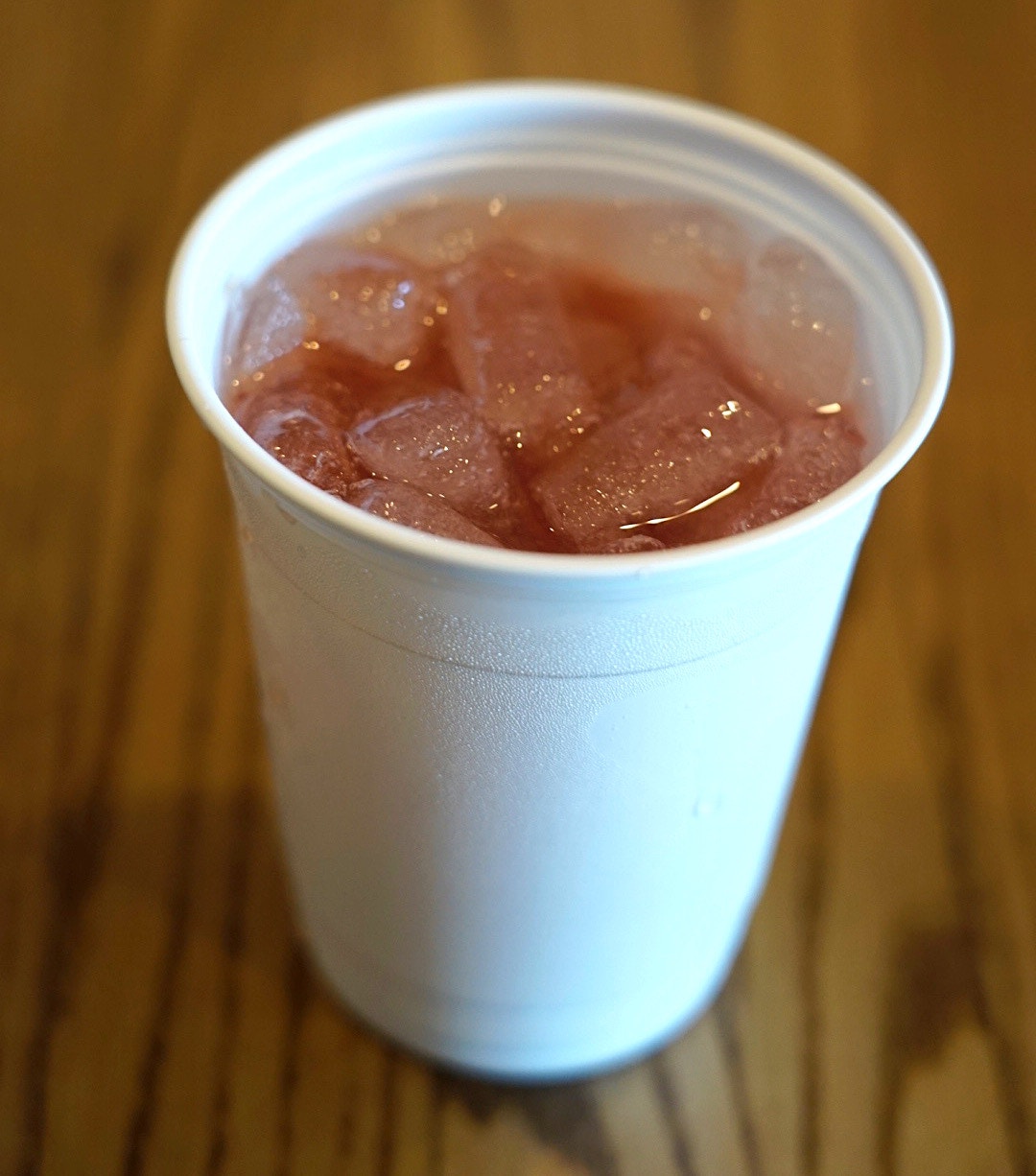 The berry punch is a refreshing, tasty punch. It taste similar to other Disney punches, but we would recommend the punch over having a traditional soda. 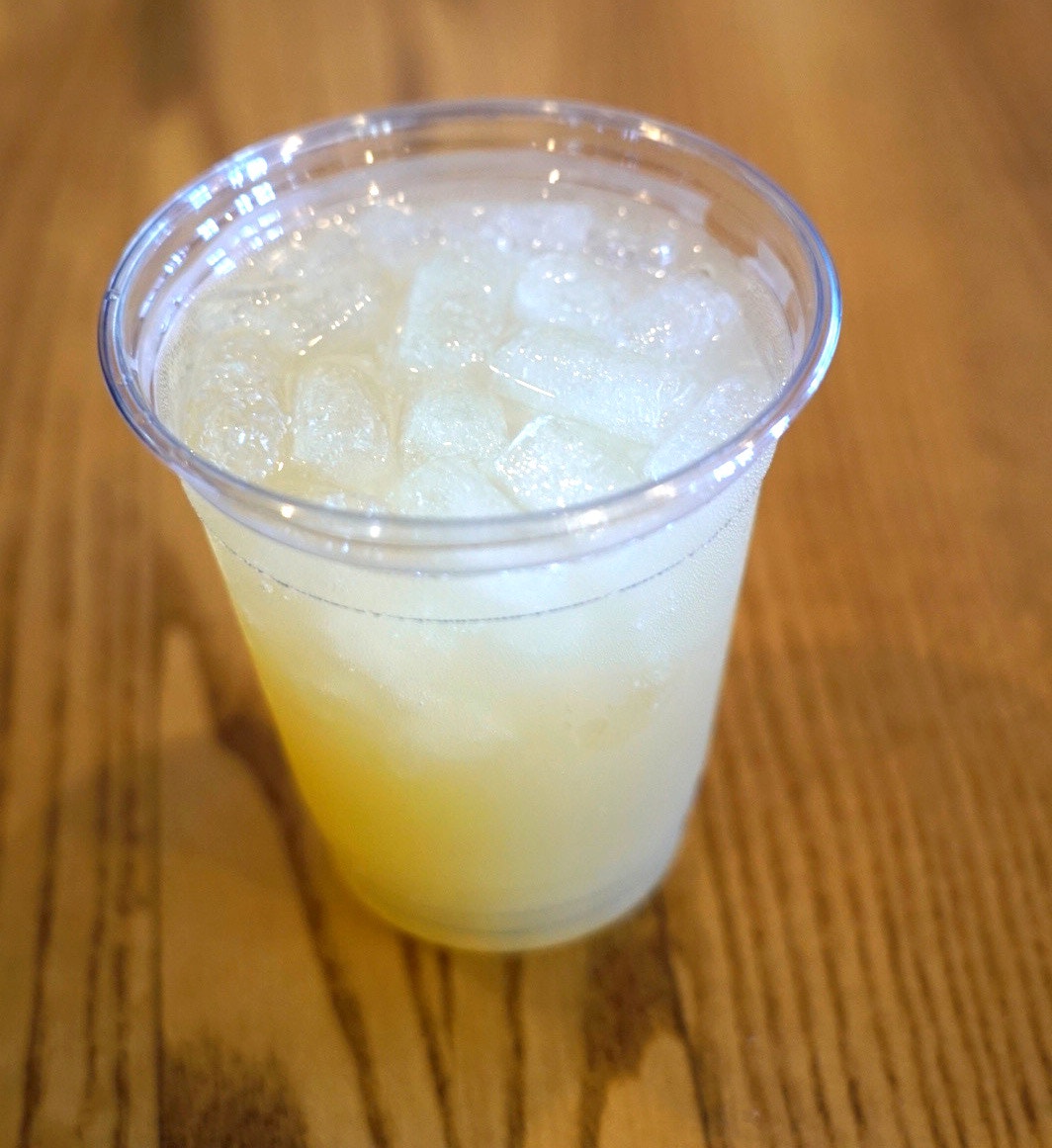 The Tennessee Lemonade (whiskey, lemonade, and peach) is refreshing with a good balance between the lemonade and whiskey. We didn’t taste any peach, however.

Between the good food (really, the only disappointing items were the ribs) and the all-over Muppets nods, Regal Eagle Smokehouse is undoubtedly an improvement over its predecessor Liberty Inn. Everything we had was great, and it shows a positive turn for counter service in the parks, and especially at EPCOT. All across property, we’ve had some really good counter service restaurants open up lately, like Primo Piatto in Disney’s Riviera Resort, so there’s a definite trend towards making counter service restaurants feel more special, and offer more thoughtful, well-prepared menu items.

We weren’t able to get any photos, but Cast Members gave us an amazing backstage tour of the custom, state-of-the-art smoker facility that was built just for the restaurant. There was definitely a high level of care that went into the development and execution of this counter service, and you can see the effort that came through on behalf of the culinary team here. The guests we saw dining alongside us seem to really enjoy Regal Eagle, and we’d like to see this same level of care put into every new counter service that opens in the coming years.