UPDATE: Disneyland Paris has moved up the closure of the park abruptly to begin on Saturday, March 14.

OFFICIAL: Based on updated direction from French authorities, the temporary closure of Disneyland and Walt Disney Studios Parks will begin Saturday, March 14 through the end of the month. The Disney Hotels and the retail and dining complexes of Disney Village will remain open. pic.twitter.com/t6K3aLQ6bz

As seen below in the original announcement, the park was not set to close until the end of the business day on Sunday, March 15. The park is to remain closed through the end of the month.

With the spread of Coronavirus impacting more and more countries outside of Asia, the final remaining Disney Park has had to close due to rising concerns over transmission of the virus.

With France establishing a temporary ban on gatherings of more than 1,000 people, Disneyland Paris has closed in order to comply with the country’s new protocols as well as rising concern regarding the COVID-19 pandemic.

Disneyland Paris will close after Sunday, March 15, and is set to remain closed through the end of the end of the month. Its resort hotels, as well as Disney Village, are scheduled to remain open. Cast Members will continue to receive wages throughout the closure period. 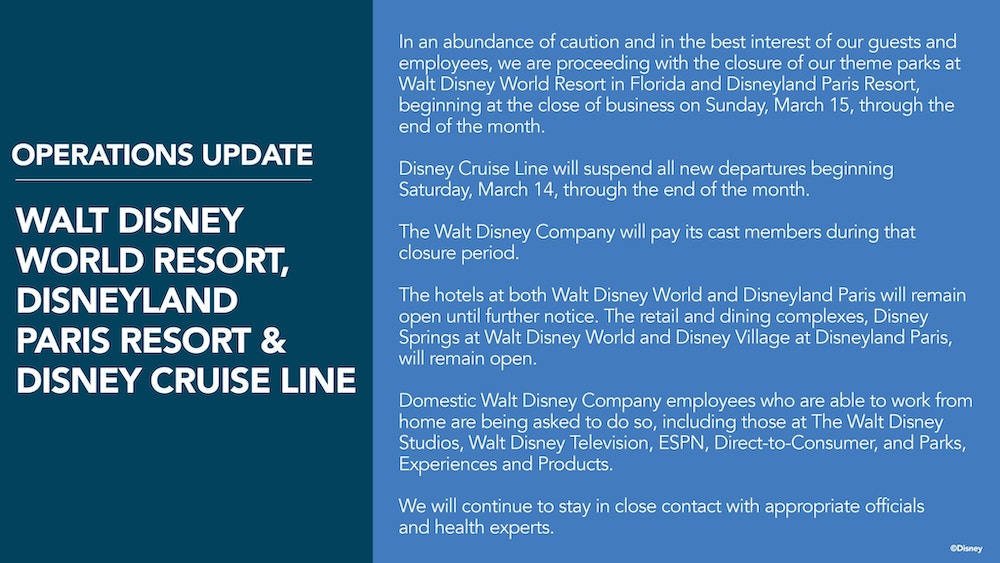 With Disneyland Paris and now Walt Disney World closed, no Disney Parks remain open. Shanghai Disneyland, Hong Kong Disneyland, and Tokyo Disney Resort have all also closed in response to the Coronavirus outbreak. While a prospective reopening date has been established (and later postponed) for Tokyo Disney Resort, it is unknown when the rest of these parks will re-open.

We’ll keep our eyes on developments here as well as in Tokyo, Shanghai, and Hong Kong regarding the COVID-19 outbreak’s effect on Disney Parks operations.

Next
Back to the Future LIVE! – The Indiana Jones Adventure 25th Anniversary Airs Tonight at 9PM