With Disney Parks around the world closed for the foreseeable future, WDWNT is dipping into our archives of vintage parks materials for a look back into parks history! And in celebration of Hollywood Studios Appreciation Week, all this week, we’re peeking into the studio vault with items from the early years of the Disney-MGM Studios! Today, we’re heading back to May 1993 to see what’s new and get a visit from the stars of Super Mario Bros. in this Show Times guide!

The cover lists that the park was open from 9 AM to 7 PM from Saturday, May 22nd, through Friday, May 28th, a far cry from the midnight closings of a few years earlier, but there’s still plenty of fun to be had! 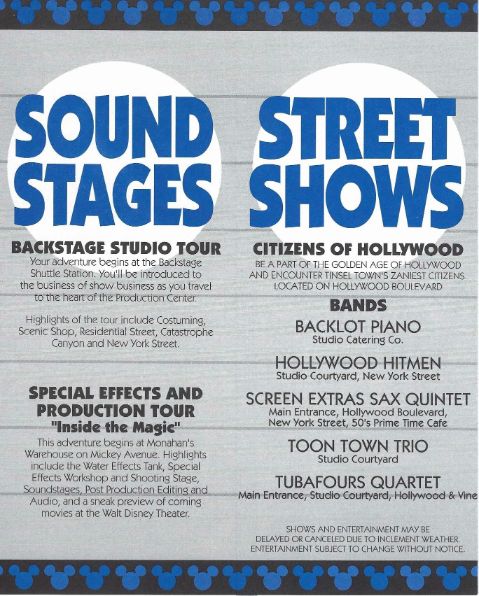 The Backstage Studio Tour and the Special Effects and Production Tour: Inside the Magic get their own page in the guide. But what do they offer?

“Backstage Studio Tour – Your adventure begins at the Backstage Shuttle Station. You’ll be introduced to the business of show business as you travel to the heart of the Production Center.

“Special Effects and Production Tour – ‘Inside the Magic’ – This adventure begins at Monahan’s Warehouse on Mickey Avenue. Highlights include the Water Effects Tank, Special Effects Workshop and Shooting Stage, Soundstages, Post Production Editing and Audio, and a sneak preview of coming movies at the Walt Disney Theater.”

Street shows take up the other half of the fold, including the Citizens of Hollywood, Backlot Piano, Hollywood Hitmen, Screen Extras Sax Quintet, Toon Town Trio, and Tubafours Quartet. 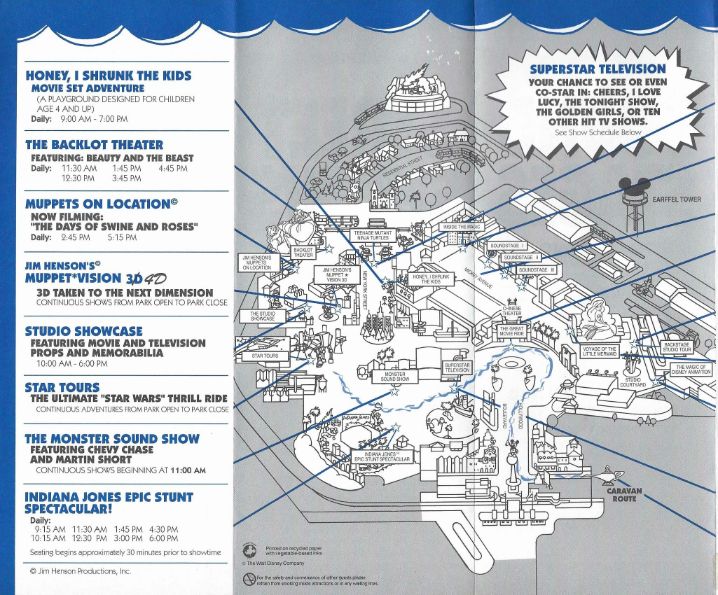 Did you notice that the “Beauty and the Beast” stage show was in the Backlot Theater? With construction on Sunset Boulevard beginning, the Theater of the Stars closed on May 2nd, 1993 to be relocated to its new placement. 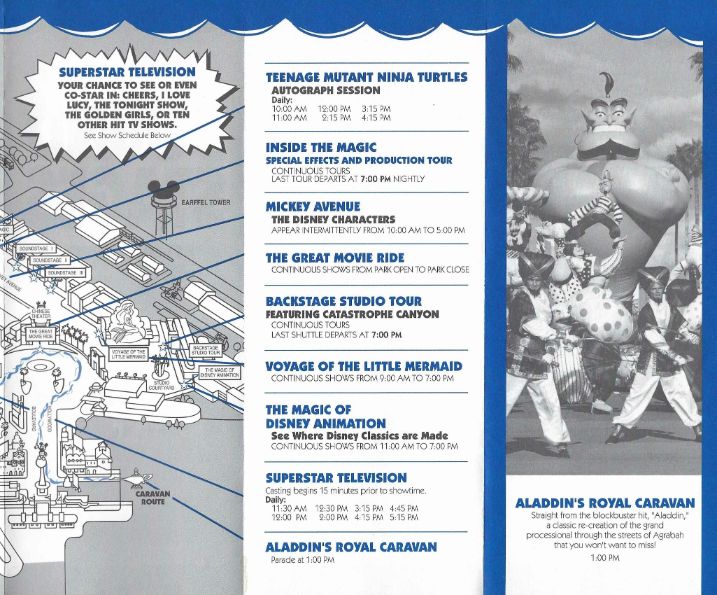 Still going strong was the Aladdin’s Royal Caravan parade, which premiered at the park in December 1992. With the shortened park hours, performance schedules of live shows were also reduced from their previous levels. 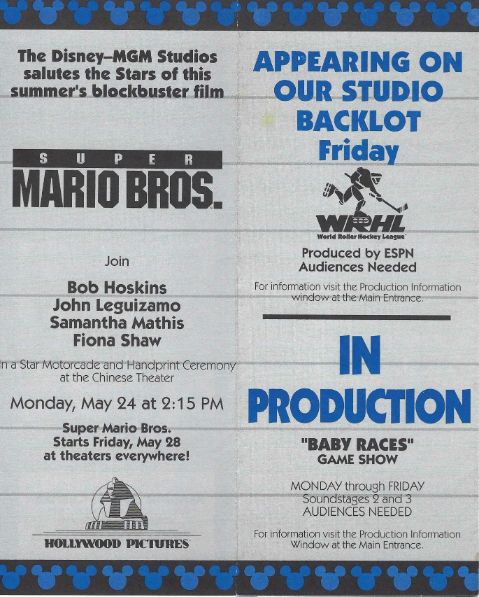 Before Nintendo decided to partner up with Universal Parks & Resorts, they had collaborated with Disney-owned studio Hollywood Pictures to create a feature film adaptation of their hit video game, Super Mario Bros. And with the film’s release coming up on that Friday, the film’s stars, Bob Hoskins, John Leguizamo, Samantha Mathis, and Fiona Shaw appeared at the park on Monday, May 24th, to take part in the Star Motorcade and Handprint Ceremony at the Chinese Theatre. Thankfully, the folks at SMB Movie Archive have photos from that very event!

Bob Hoskins, John Leguizamo, Samantha Mathis, and Fiona Shaw at the world premiere of Super Mario Bros.: The Movie at Walt Disney World. They all placed their hands in the Walk of Fame! #SMB25 #TrustTheFungus pic.twitter.com/ayOocIMLkP

On the production side, ESPN (not yet part of the Disney family) was producing games for the World Roller Hockey League on the backlot, while the game show “Baby Races” was also filming at the studios. “Baby Races” only lasted for one season on The Family Channel (now the Disney-owned Freeform), running from September 1993 to March 1994.

From movie stars and video games to live entertainment, the name of the game was excitement at the Disney-MGM Studios!