With Disney Parks around the world closed for the foreseeable future, WDWNT is dipping into our archives of vintage materials for a look back into Disney history! We’re heading back in time to see Walt Disney Productions in the early 1970’s with the second part of the 1973 Annual Report, featuring Disneyland, film and television productions, and more! 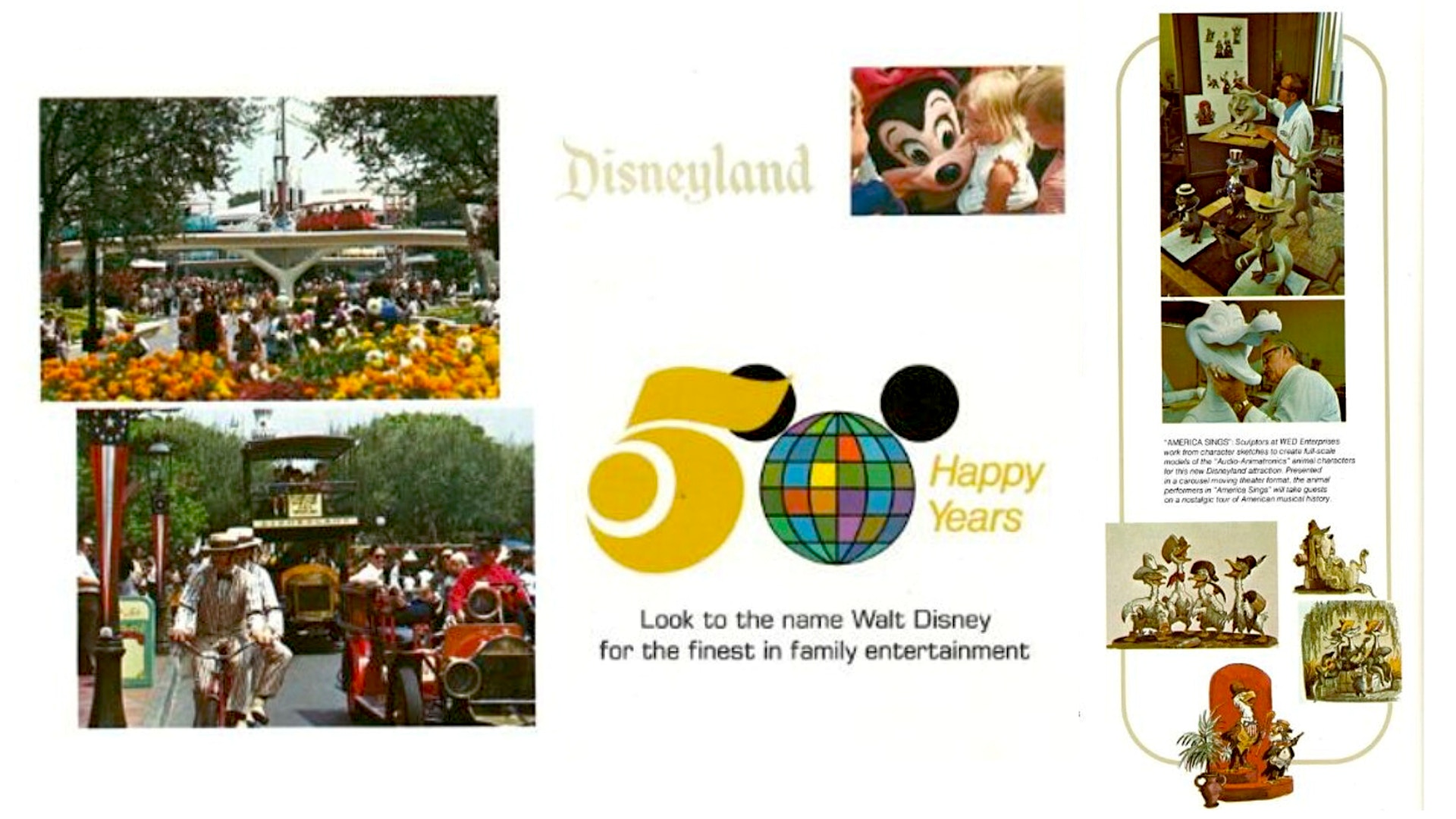 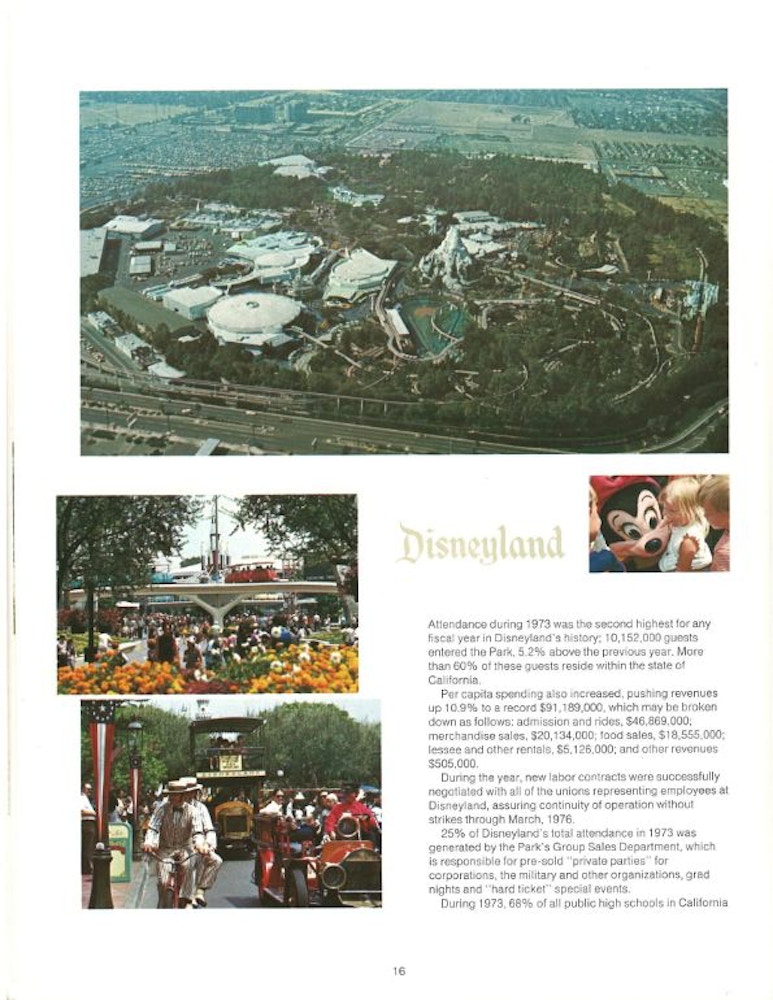 We pick up at Disneyland, where business was very good in 1973, home to the second highest attendance for a fiscal year in the park’s history. 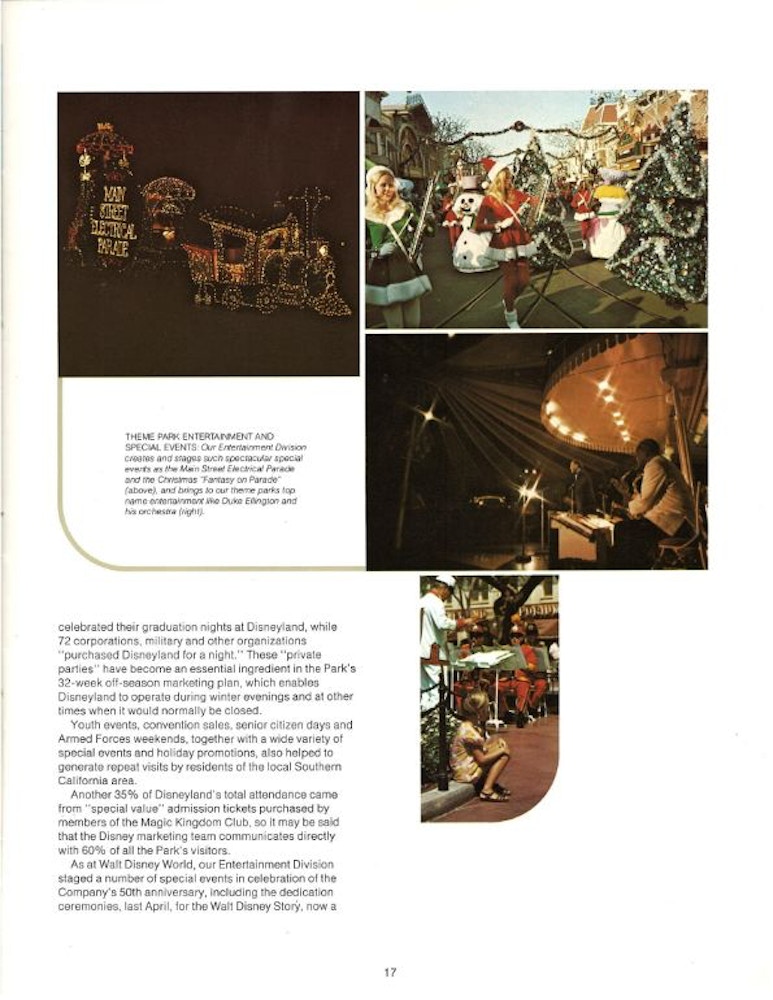 It was also the first full year of operation for the Main Street Electrical Parade, which first kicked off at Disneyland in June 1972. 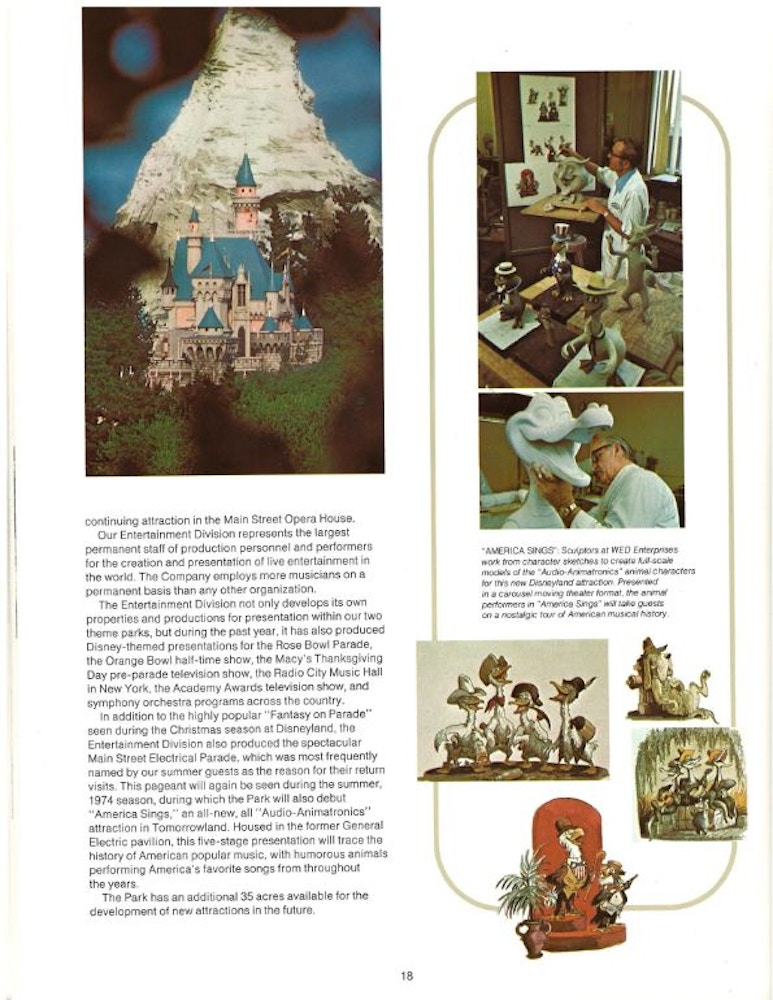 What’s new at Disneyland in 1974? Why, it’s America Sings, an Audio-Animatronic revue in Tomorrowland that takes guests through America’s musical history as performed by a cast of critters. If they look familiar to you, you may recognize them from Disneyland’s Splash Mountain, which reused many of the Audio-Animatronics when it opened in 1989. 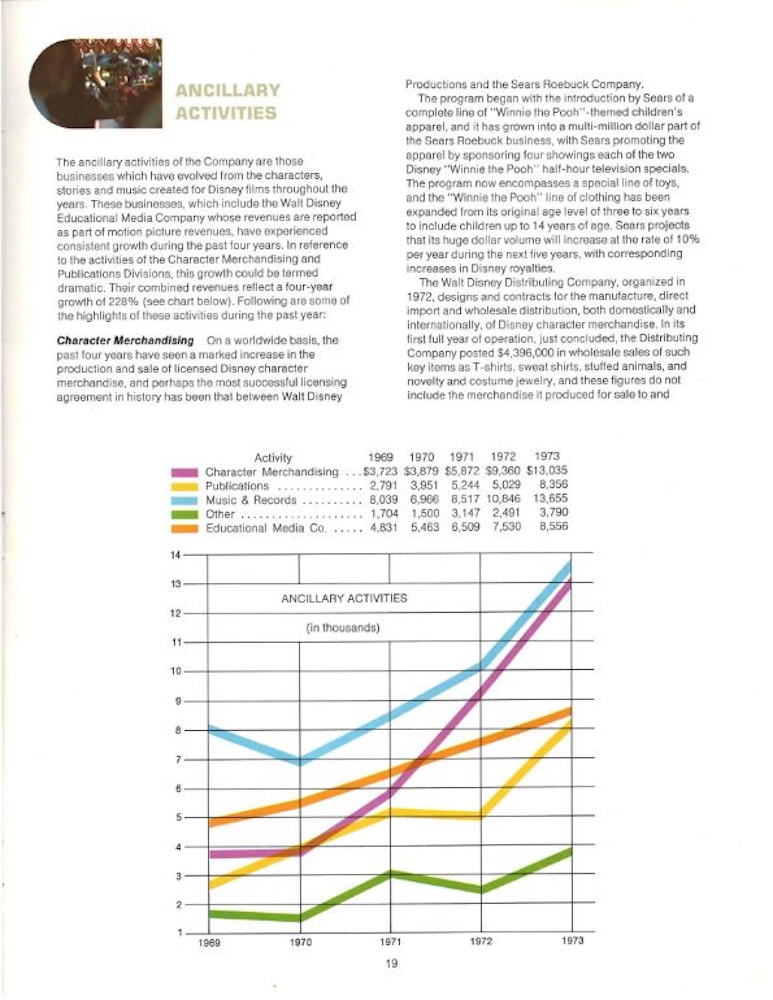 Do you remember in the 1965 Annual Report when they discuss Disney’s new deal with the Sears Roebuck Company to license Winnie the Pooh merchandise? This have certainly taken off since then, being called “the most successful licensing deal in history.” 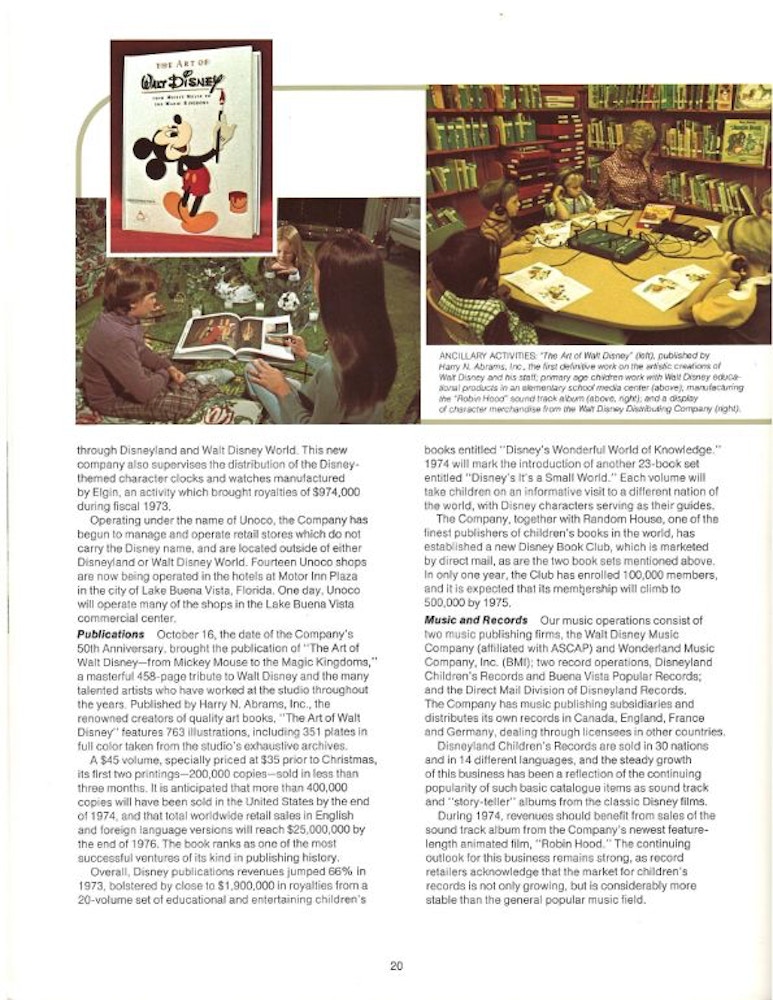 Does anyone have a copy of The Art of Walt Disney – from Mickey Mouse to the Magic Kingdoms? The book was originally printed to mark the company’s fiftieth anniversary. 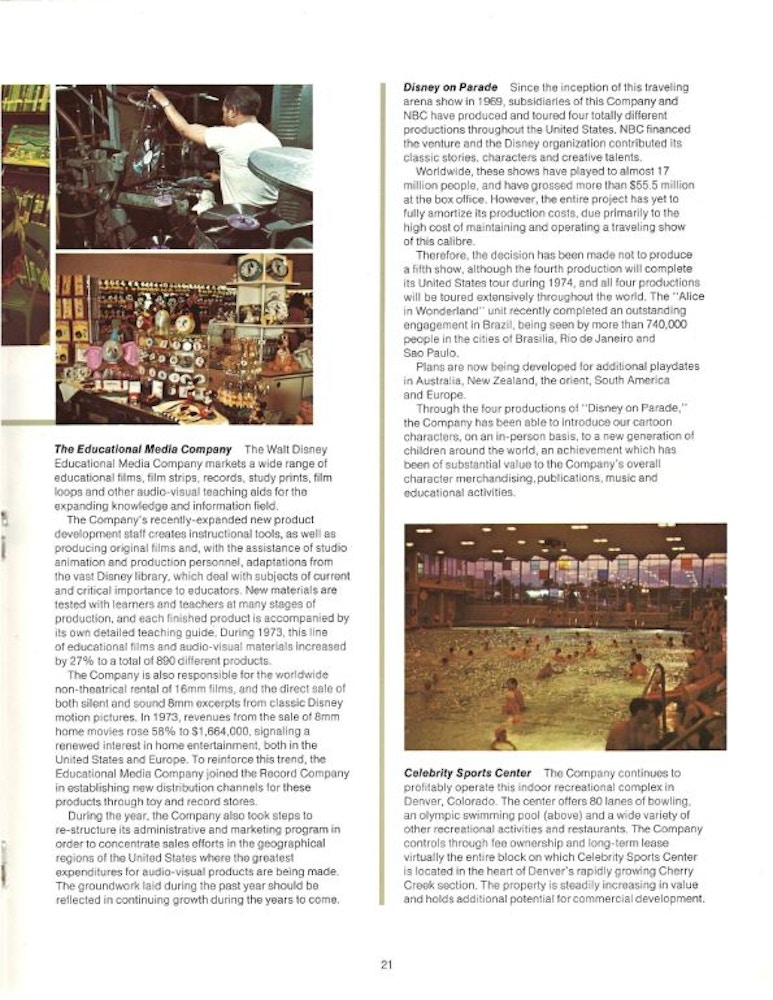 This page talks about Disney’s educational films, the “Disney on Parade” live show, and the Celebrity Sports Center in Colorado. 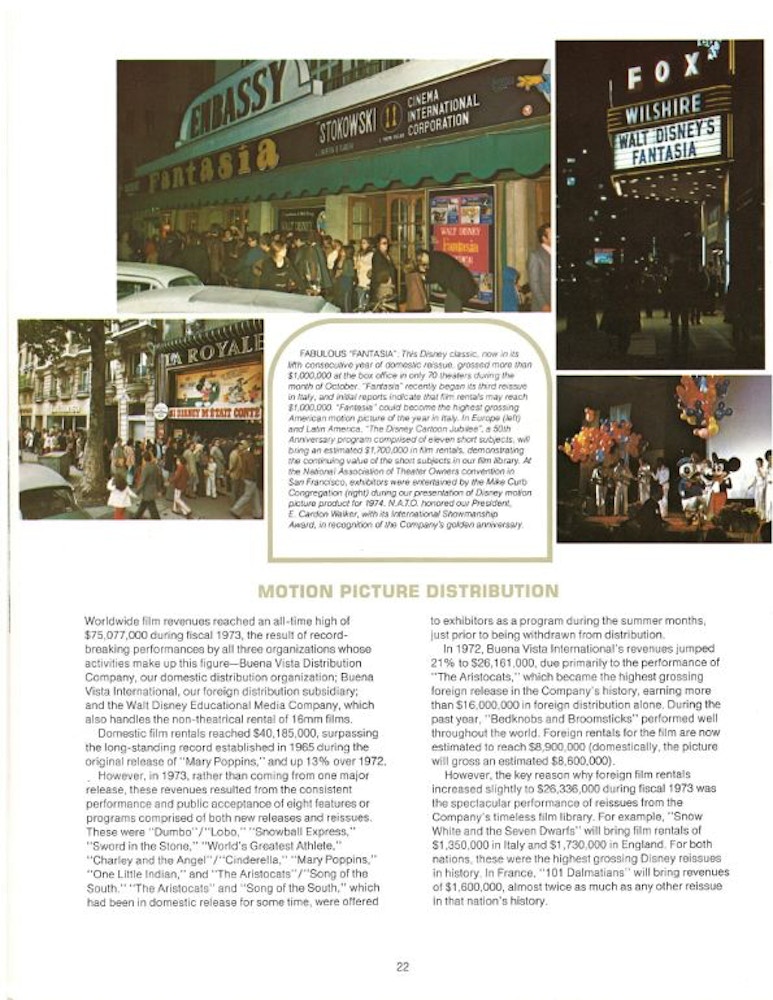 We then get into feature films, starting with rentals of earlier Disney films like Dumbo, The Sword in the Stone, Mary Poppins, and The Aristocats. 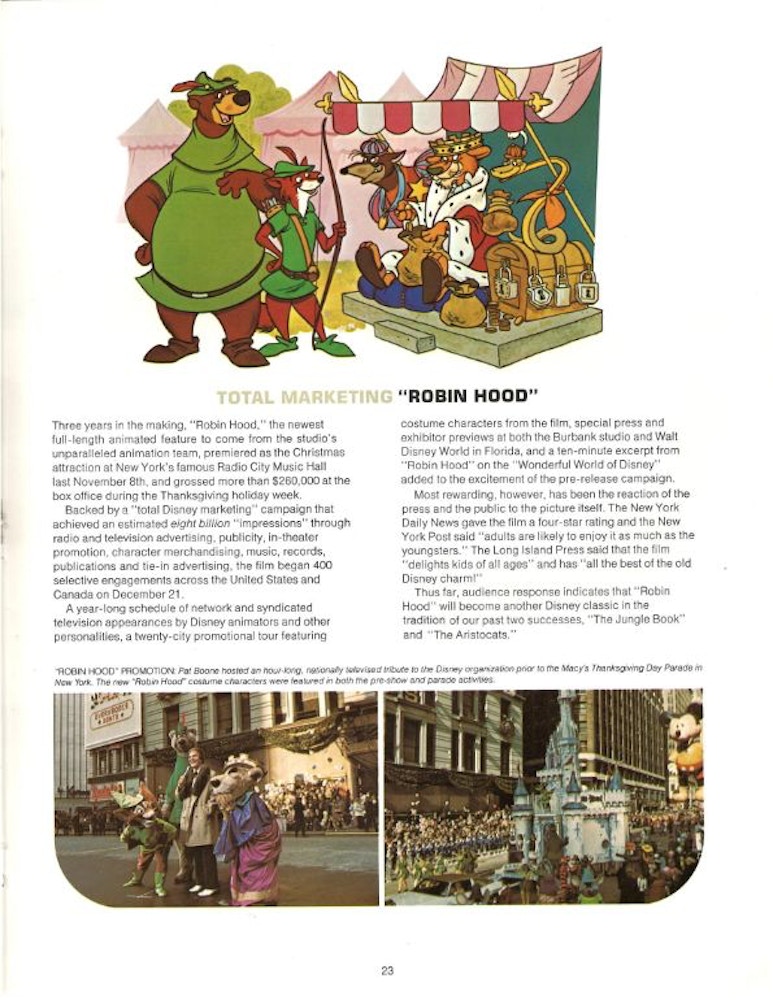 Disney once again discusses its “total marketing” process, this time for the recently-released Robin Hood, complete with character appearances in the Macy’s Thanksgiving Day Parade. 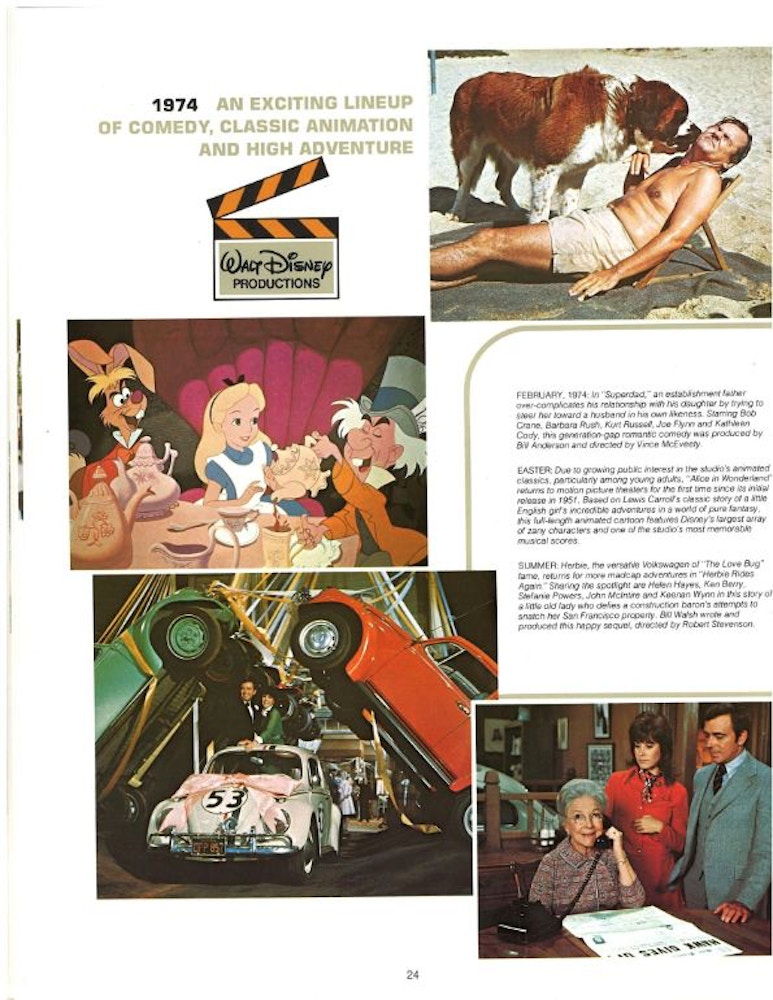 But what’s new from Disney’s film department in 1974? Fun and adventure abound in such projects as Superdad (which premiered in 1973 but would go to a wide release in February 1974), re-releases of Alice in Wonderland and Lt. Robin Crusoe, U.S.N., Herbie Rides Again, The Bears and I, The Castaway Cowboy, and The Island at the Top of the World. 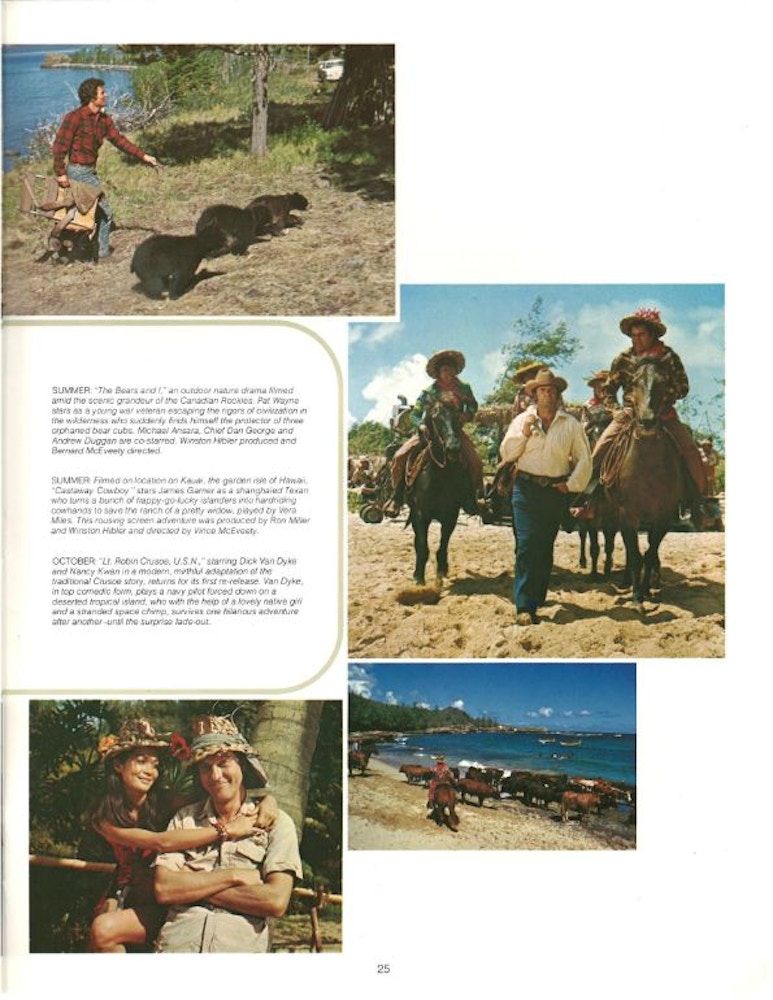 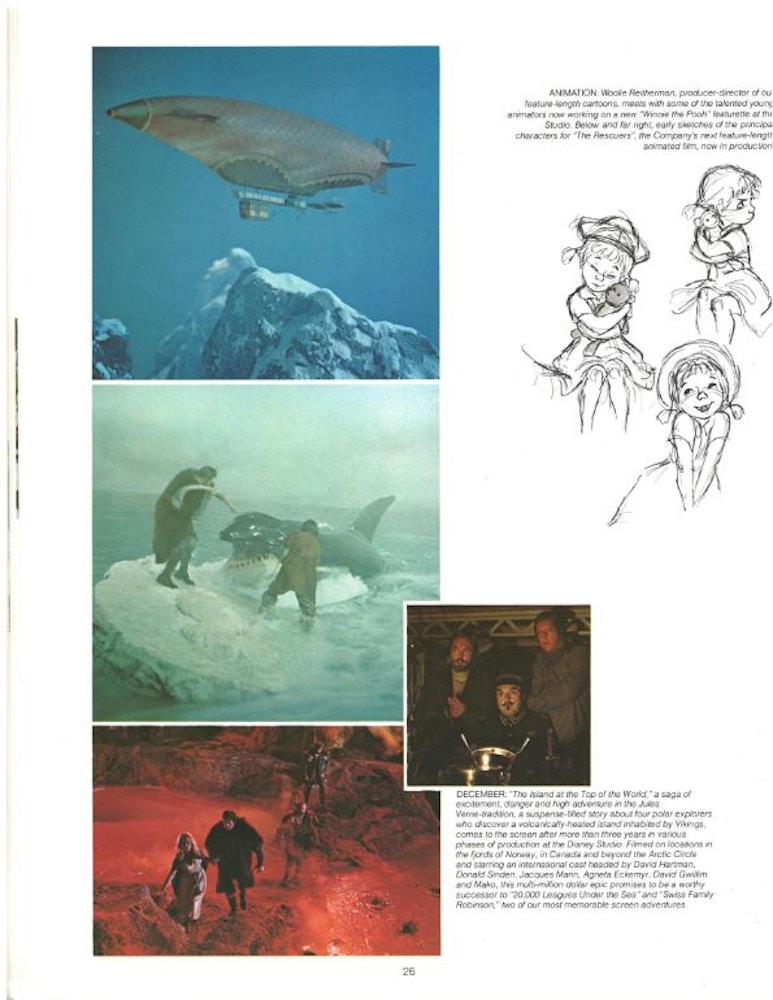 The report also features early art from an animated film in production, which is none other than The Rescuers, which would arrive in theaters in June 1977. 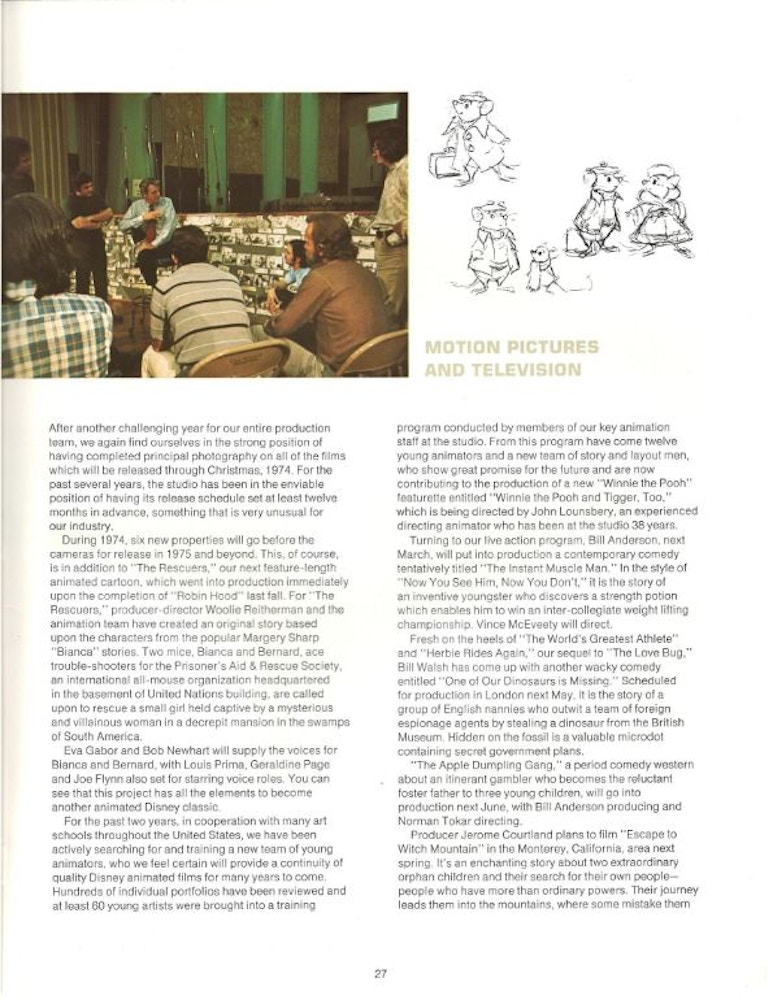 As that leads into 1975 and beyond, we learn about animated shorts and live action films that would become hallmarks of Disney’s film library, including Winnie the Pooh and Tigger, Too, the Dexter Riley film The Strongest Man in the World (described here as “The Instant Muscle Man”), One of Our Dinosaurs is Missing, The Apple Dumpling Gang, Escape to Witch Mountain, Gus, and Ride a Wild Pony. 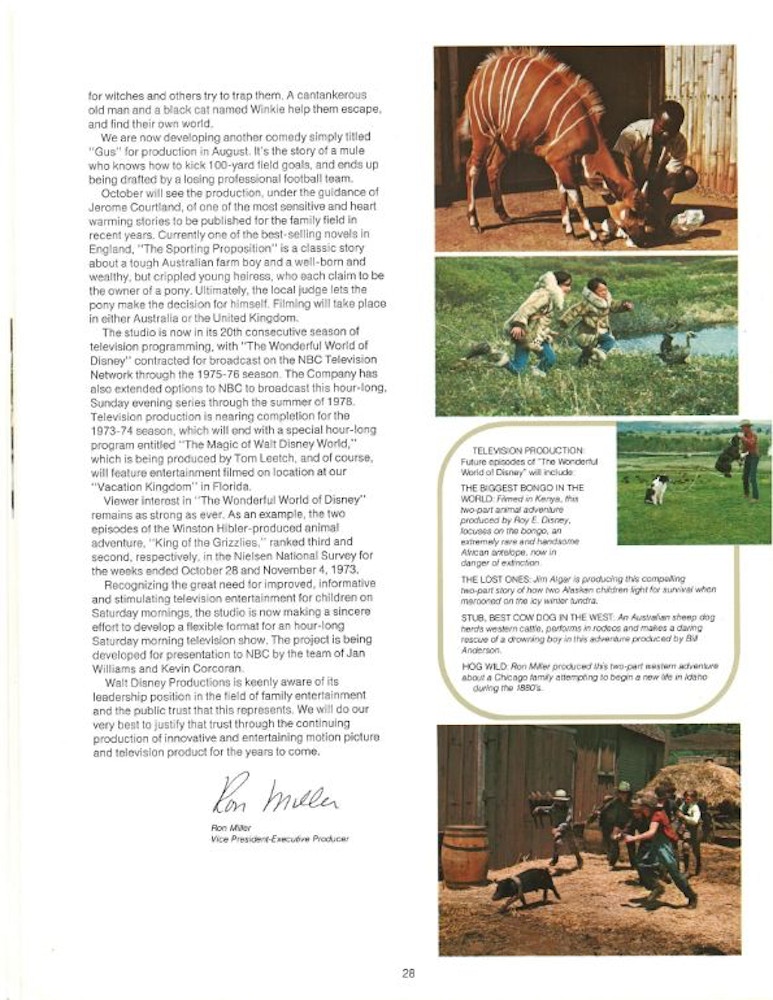 Future President and CEO Ron Miller, then a Vice President-Executive Producer, closes out the section saying:

“Walt Disney Productions is keenly aware of its leadership position in the field of family entertainment and the public trust that this represents. We will do our very best to justify that trust through the continuing production of innovative and entertaining motion picture and television product for the years to come.” 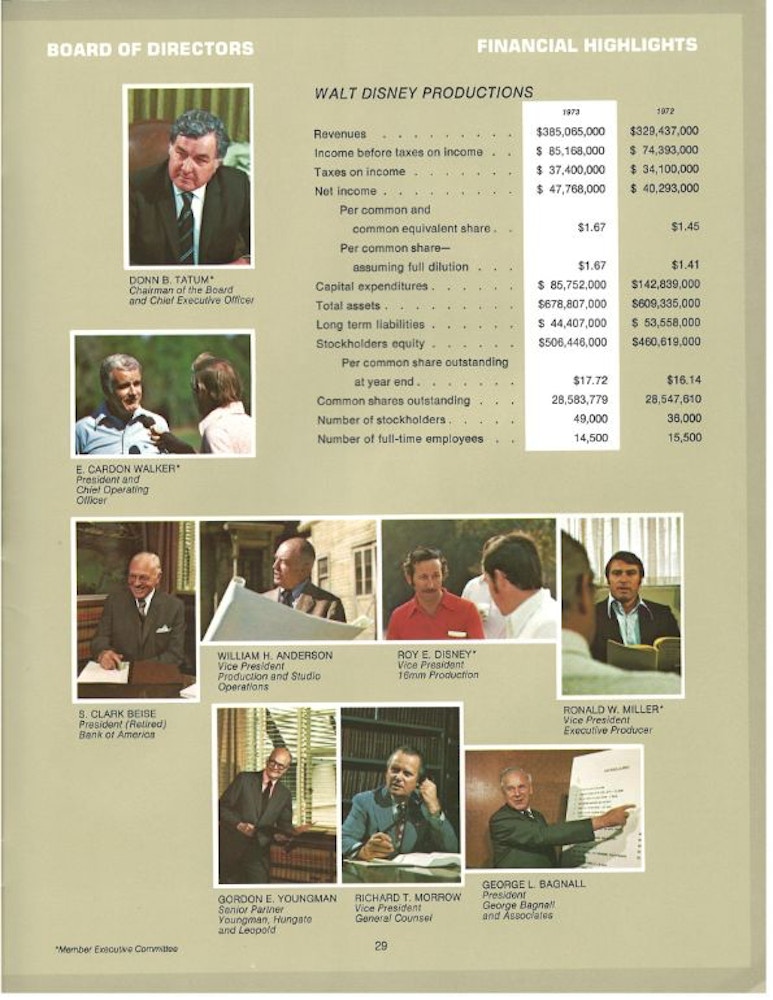 Now it’s time for everyone’s favorite part of the Annual Report: the financials! (Of course, there are some names and faces here that you may recognize, like Miller, Donn Tatum, Card Walker, Bill Anderson, and Roy E. Disney. 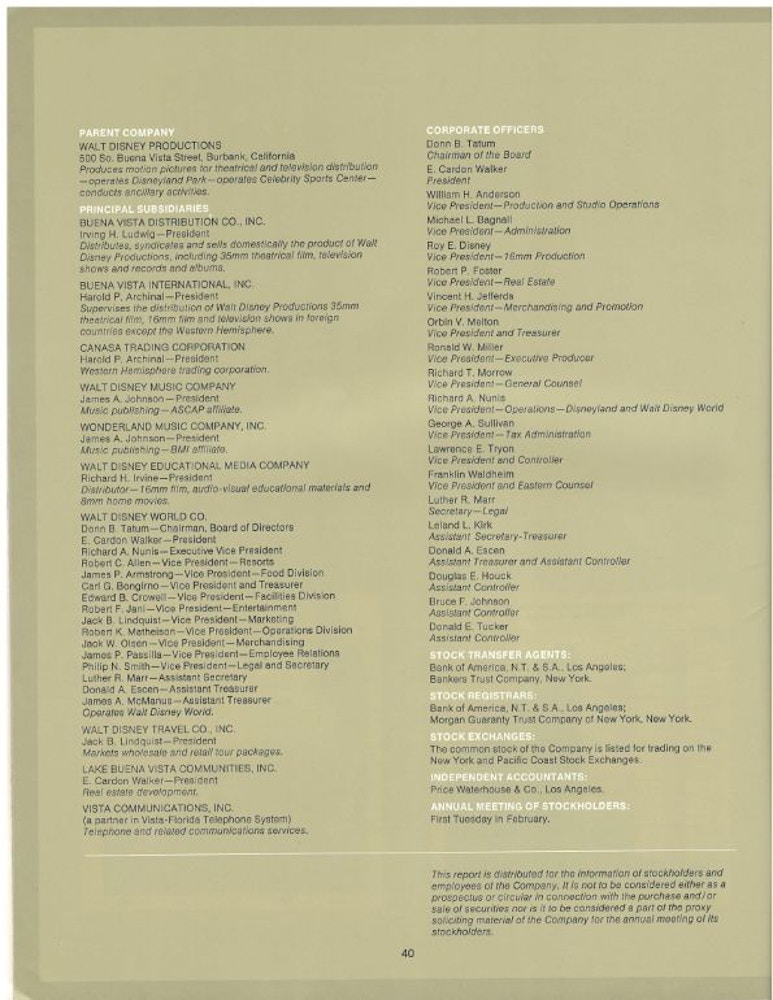 With the opening of Walt Disney World, some names near and dear to Disney Parks fans hearts can be found in the executive listings, like Dick Nunis, Jack Lindquist, Carl Bongirno, Bob Allen, Robert Jani, Jack Olsen, Don Escen, and Bob Matheison. 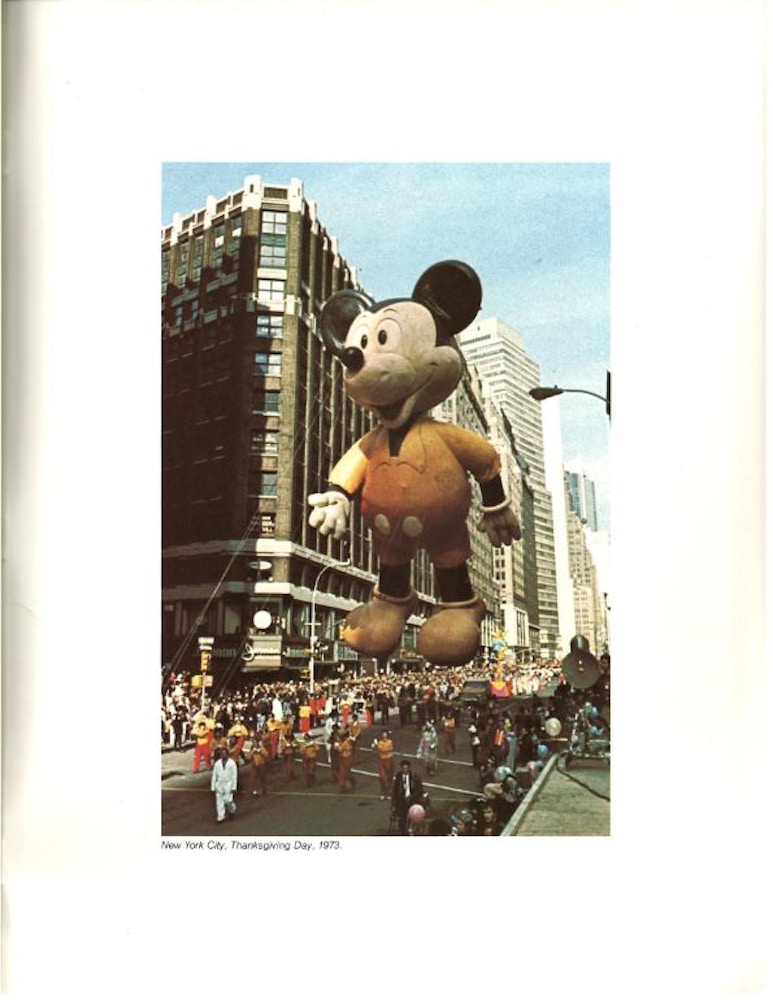 And fittingly enough for Disney, it all ends with a mouse, with a picture of the Mickey Mouse balloon at the 1973 Macy’s Thanksgiving Day Parade. 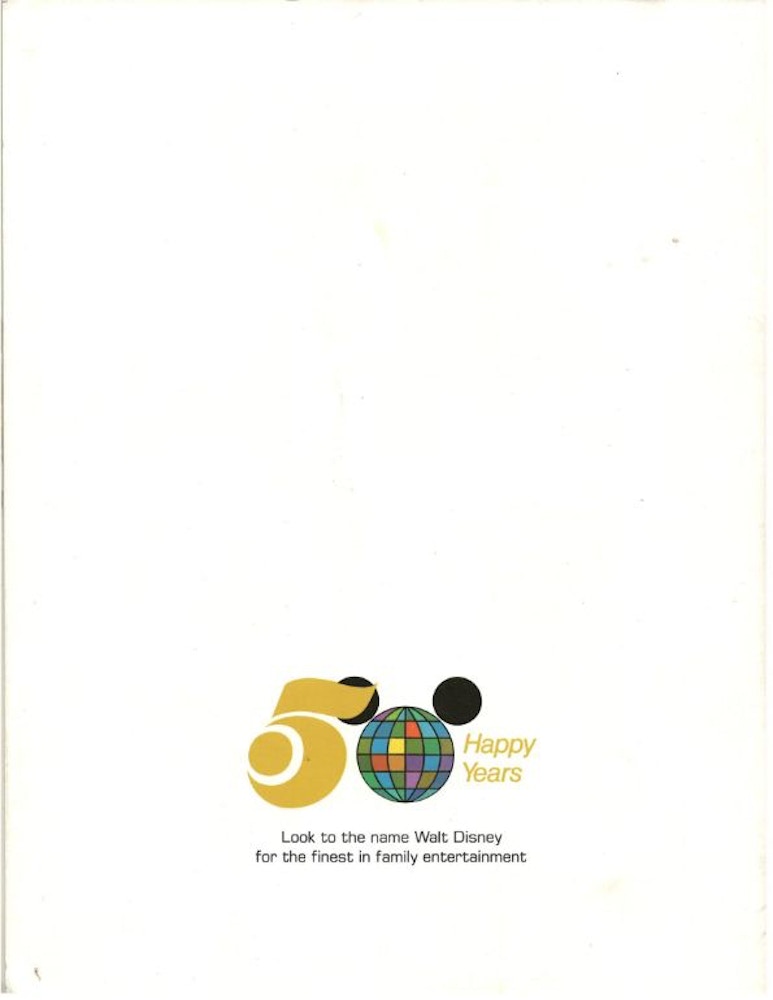 The back cover features a 50th anniversary logo. Say, if you tilt your head, does the bottom of the five look like Mickey’s eye, or is it just me?

And that concludes the 1973 Annual Report! Be sure to look at the first part of this report for a look at Walt Disney World in ’73, and keep reading WDWNT for more items from Disney history!

Previous
DREAMFINDERS: Kirk Hanson on the Making of Aladdin & Working with Imagineering

Next
WATCH: Drake Bell Talks Disneyland and Gives Us a Tour of His Disney-Inspired Home in WDWNT’s “Club Cool” with Tyler and Alicia; Plus an Interview with Lip Candy Tomorrow at 11:00 AM!