With Disney Parks around the world closed for the foreseeable future, WDWNT is dipping into our archives of vintage parks materials for a look back into parks history! And in celebration of Hollywood Studios Appreciation Week, all this week, we’re peeking into the studio vault with items from the early years of the Disney-MGM Studios! In 1991, new attractions and restaurants arrived, and we’ll take a look at it all in a guidebook from late in the year. 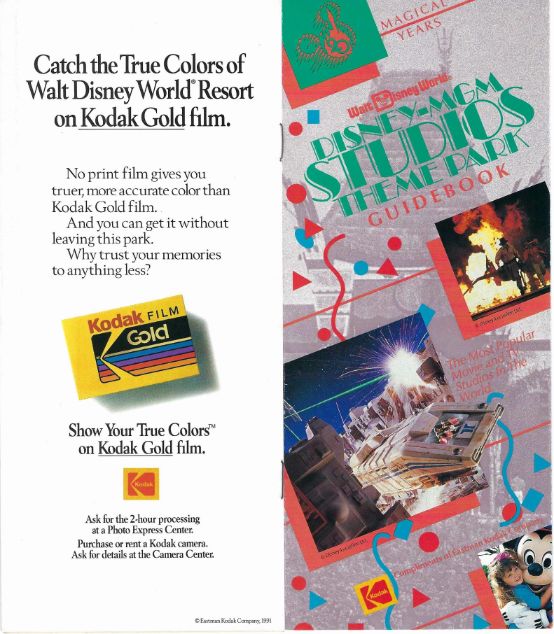 There’s a new design to the guidebook, including a new cover, featuring two of the biggest attractions at the time: Star Tours and the Indiana Jones Epic Stunt Spectacular. (And check out that logo for Walt Disney World’s 20th anniversary in the top corner!) 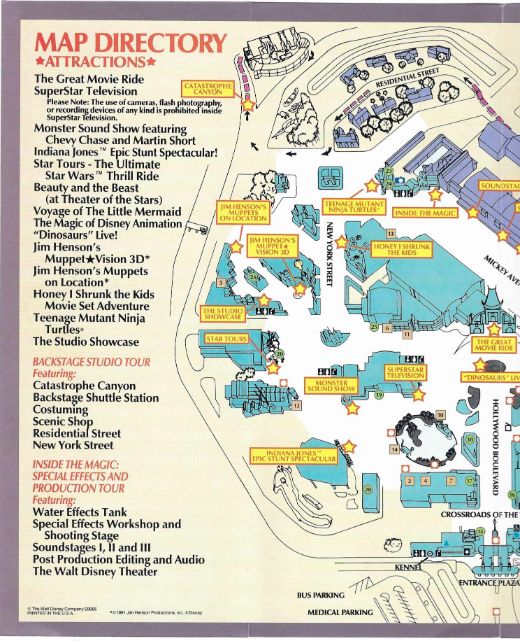 Rather than explore the park land by land as they did in 1989 and 1990, the guide offers a general park map before going into a complete listing of attractions, dining and shops. New additions in this guidebook include park mainstays Muppet*Vision 3D, Voyage of the Little Mermaid, and Beauty and the Beast – Live on Stage, along with former offerings like “Dinosaurs” Live!, Jim Henson’s Muppets on Location, the Honey I Shrunk the Kids Movie Set Adventure, and The Studio Showcase. Meanwhile, the Backstage Studio Tour has split into two separate attractions, with the tram portion retaining its previous name, while the walking portion has been renamed Inside the Magic: Special Effects and Production Tour. 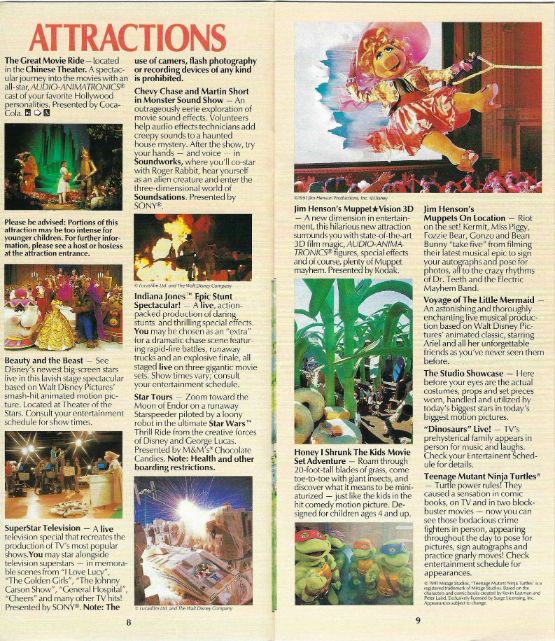 While most of these attractions have become icons of the park’s past and present, here are some descriptions of some lesser-known offerings:

“Jim Henson’s Muppets on Location – Riot on the set! Kermit, Miss Piggy, Fozzie Bear, Gonzo and Bean Bunny ‘take five’ from filming their latest musical epic to sign your autographs and pose for photos, all to the crazy rhythms of Dr. Teeth and the Electric Mayhem Band.”

“The Studio Showcase – Here before your eyes are the actual costumes, props and set pieces worn, handled and utilized by today’s biggest stars in today’s biggest motion pictures.” 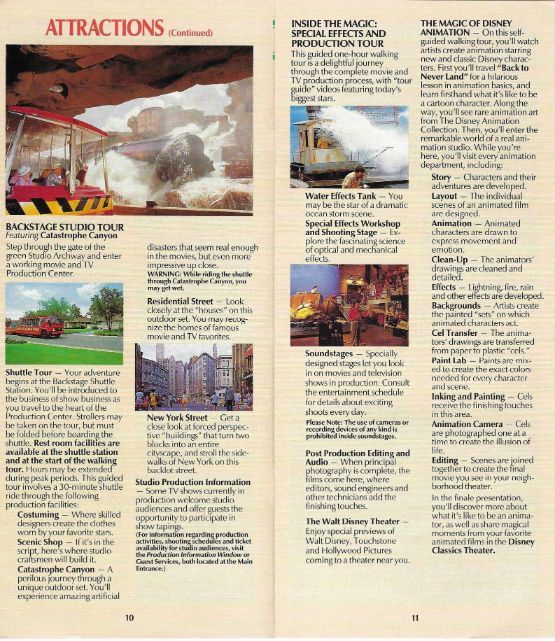 The behind-the-scenes attractions get their own layout. As mentioned before, the tram and walking portions of the tour have separated into two distinct offerings, but their components remain the same. Meanwhile, The Magic of Disney Animation continues to delight. 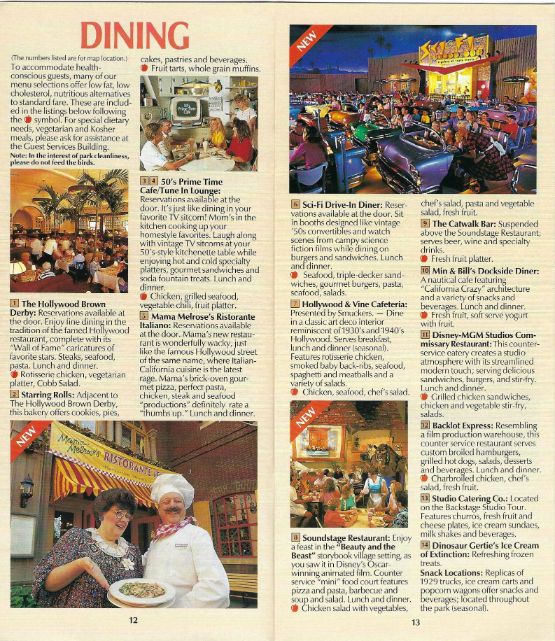 Perhaps the biggest expansion at the Disney-MGM Studios in 1991 came in its dining options. Premiering that year were Mama Melrose’s Ristorante Italiano, the Sci-Fi Dine-In Theater Restaurant (then known as the Sci-Fi Drive-In Diner), in addition to late 1990’s addition, the Disney-MGM Studios Commissary Restaurant, which would later become the ABC Commissary. Those are three eateries that have withstood the test of time! Meanwhile, at the Soundstage Restaurant, sets from Big Business are out and new decor inspired by Beauty and the Beast is in. 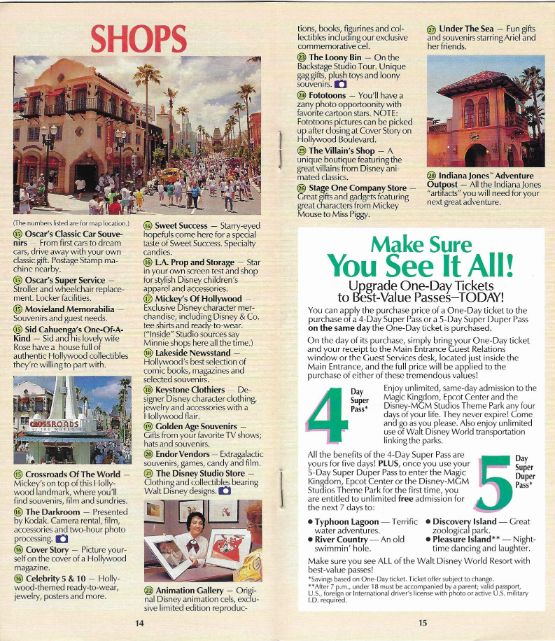 The shops also get their own spread this time around. Did you ever purchase anything at The Loony Bin or Sid Cahuenga’s One-of-a-Kind? 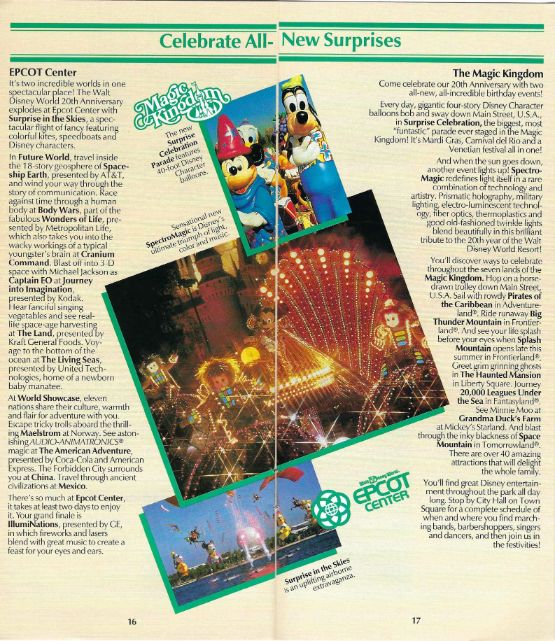 Elsewhere at Walt Disney World, there’s a big 20th anniversary celebration going on, with new spectaculars to match. At EPCOT Center, there’s Surprise in the Skies, which was a short-lived daytime show on World Showcase Lagoon, and over at the Magic Kingdom, there’s SpectroMagic, a nighttime parade that lasted much longer and became a fan-favorite. 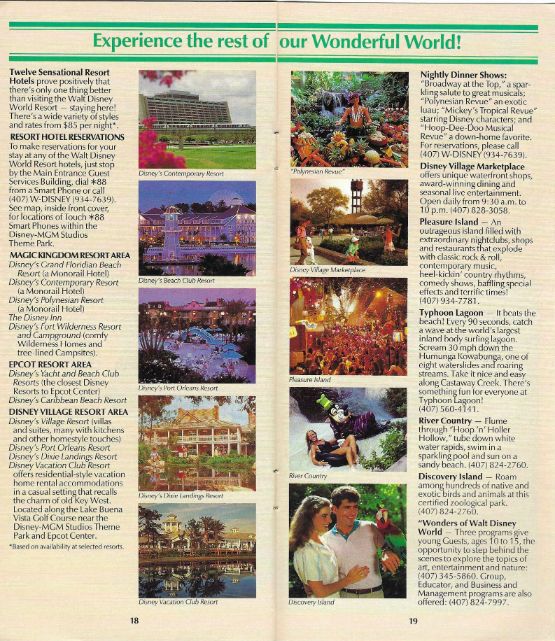 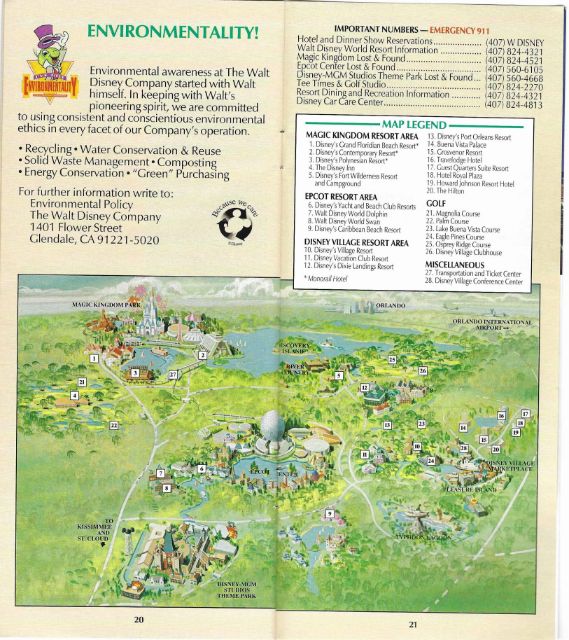 The Walt Disney World map comes with a phone directory and a message about Disney’s “Environmentality” program. 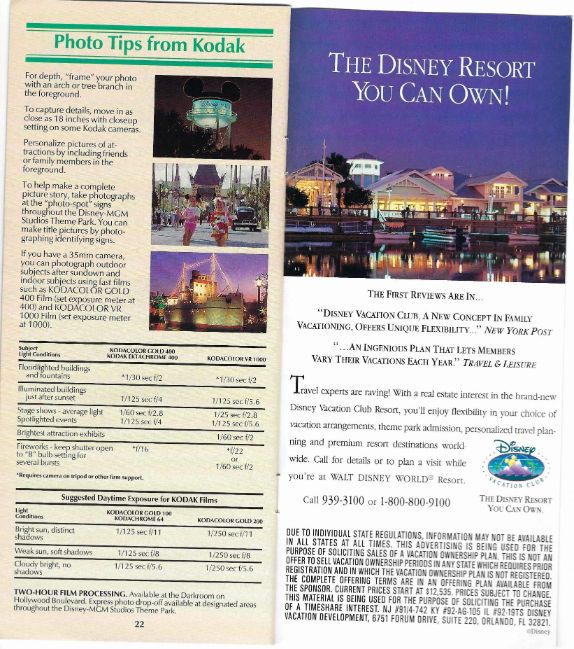 The final section offers photography tips from Kodak, along with an ad for possibly the biggest thing to come out of 1991: Disney Vacation Club, with their first resort, simply called Disney’s Vacation Club Resort. In 1996, it would be renamed Disney’s Old Key West Resort.

What was your favorite addition from 1991? Let us know in the comments below!

Previous
Back to the Future LIVE! – The Complete History of the Disney-MGM Studios Backlot Theater Airs Tonight at 9PM