With Disney Parks around the world closed for the foreseeable future, WDWNT is dipping into our archives of vintage parks materials for a look back into parks history! Let’s head back to October 23rd, 1982 for the Official Opening of EPCOT Center’s World Showcase with festival program from the event!

Note: This article will detail the program page by page, but WIGS Members will have access to download a full-resolution PDF of the entire thing. Head on over to Patreon.com/wdwnt to join WIGS, the WDWNT Inner Globe Society, for as little as $2 a month and unlock access to great content like this, and much more! 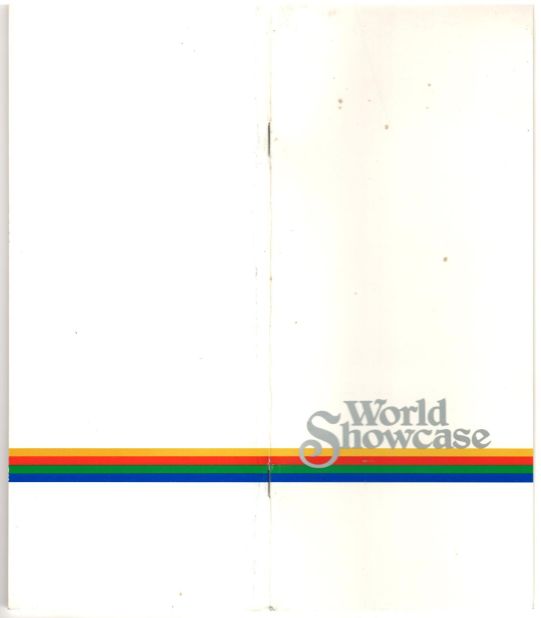 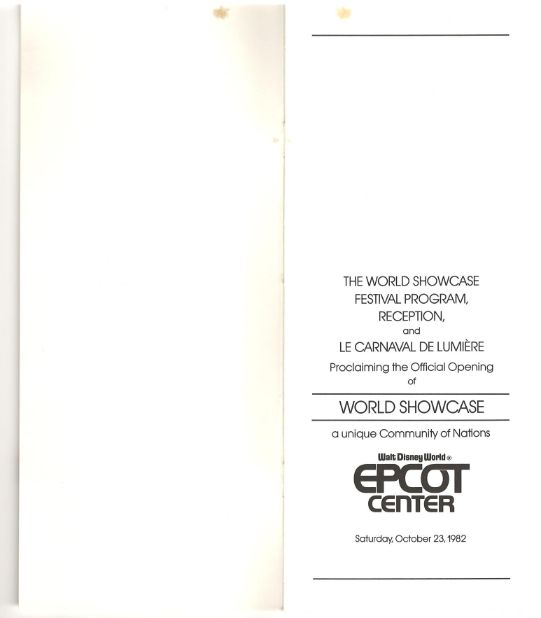 The evening consisted of a reception featuring performers from around the world and the All-American College Marching Band, and the premiere of Le Carnaval de Lumière, the park’s first nighttime spectacular. 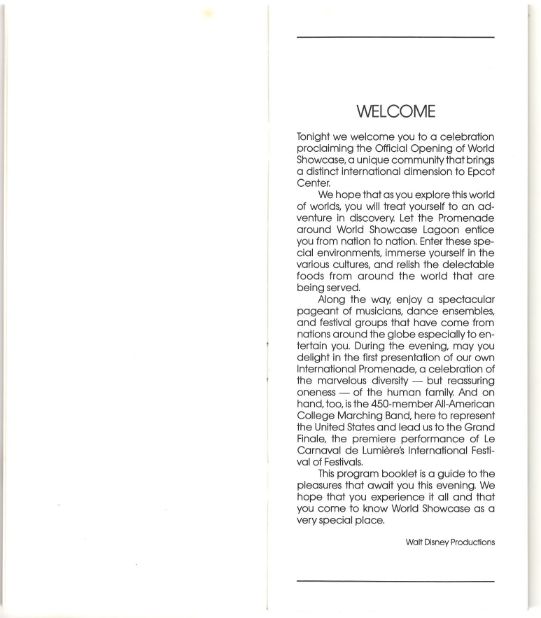 “Tonight we welcome you to a celebration proclaiming the Official Opening of World Showcase, a unique community that brings a distinct international dimension to Epcot Center.

We hope that as you explore this world of worlds, you will treat yourself to an adventure in discovery. Let the Promenade around World Showcase Lagoon entice you from nation to nation. Enter these special environments, immerse yourself in the various cultures, and relish the delectable foods from around the world that are being served.

Along the way, enjoy a spectacular pageant of musicians, dance ensembles, and festival groups that have come from nations around the world especially to entertain you. During the evening, may you delight in the first presentation of our own International Promenade, a celebration of the marvelous diversity – but reassuring oneness – of the human family. And on hand, too, is the 450-member All-American College Marching Band, here to represent the United States and lead us to the Grand Finale, the premiere performance of The evening consisted of a reception featuring performers from around the world, the All-American College Marching Band, and the premiere of Le Carnaval de Lumière’s International Festival of Festivals.

This program booklet is a guide to the pleasures that await you this evening. We hope that you experience it all and that you come to know World Showcase as a very special place. 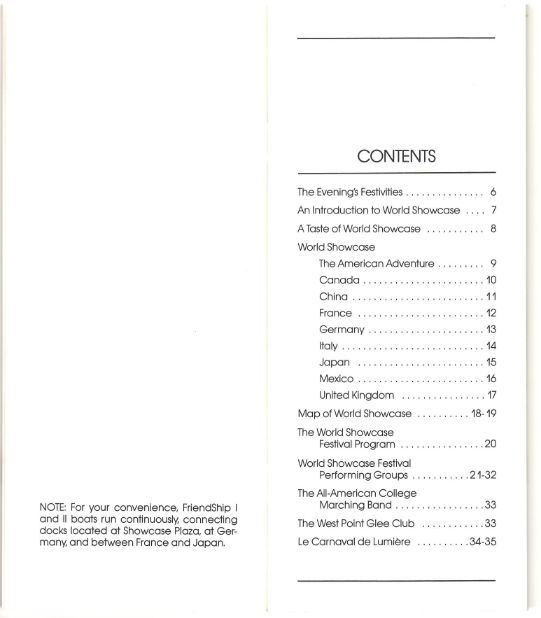 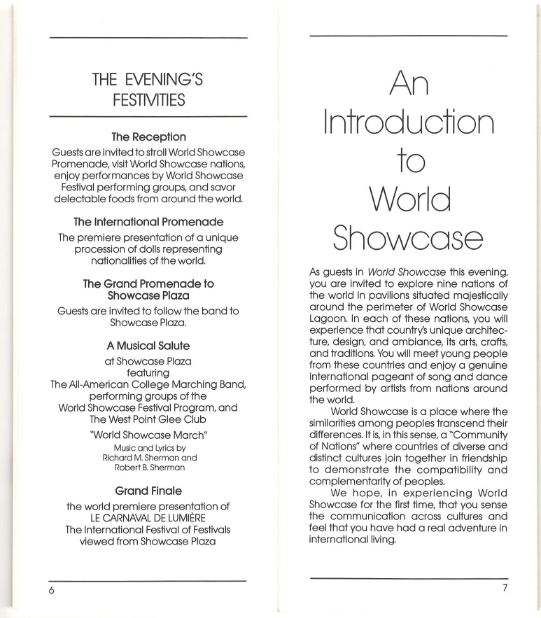 Foods from around the world and performing artists? Could this be the first EPCOT festival? 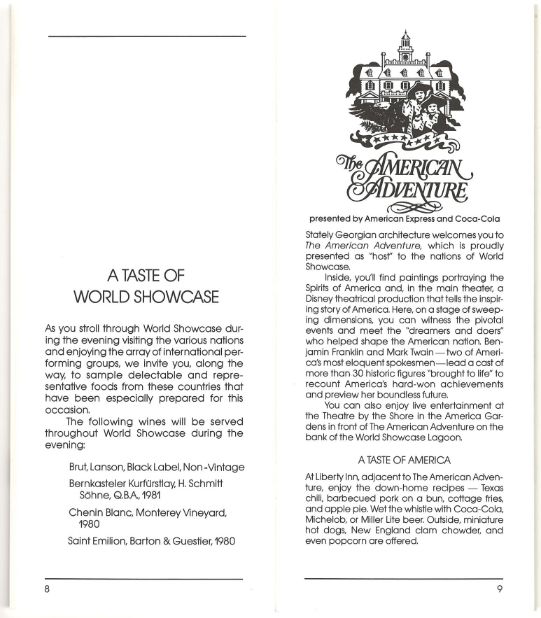 Well, if the wine is complimentary, then probably not. 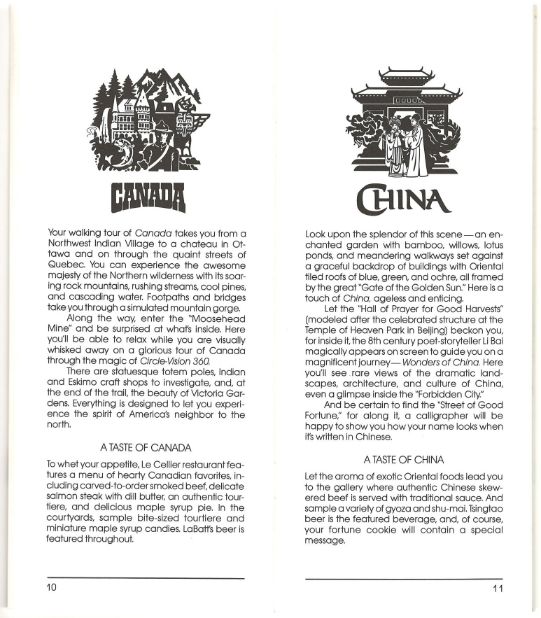 The pavilions of World Showcase are presented in alphabetical, rather than directional order. Each page features a summary of the pavilion, along with highlights of each nation’s culinary offerings. 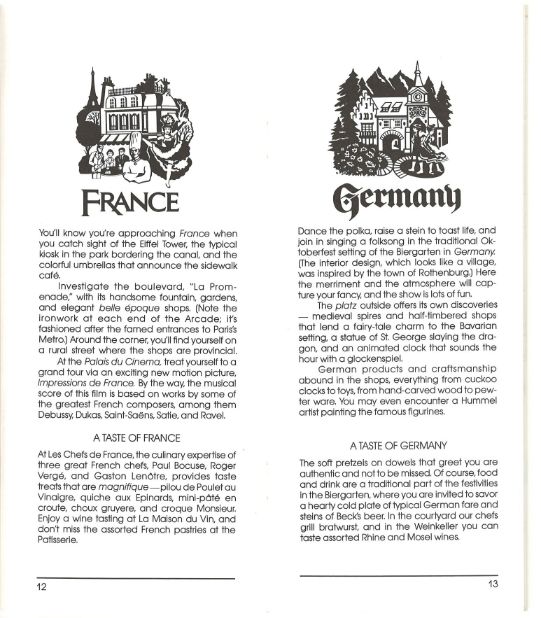 Did you know that the interior design of Biergarten was inspired by the German town of Rothenburg? 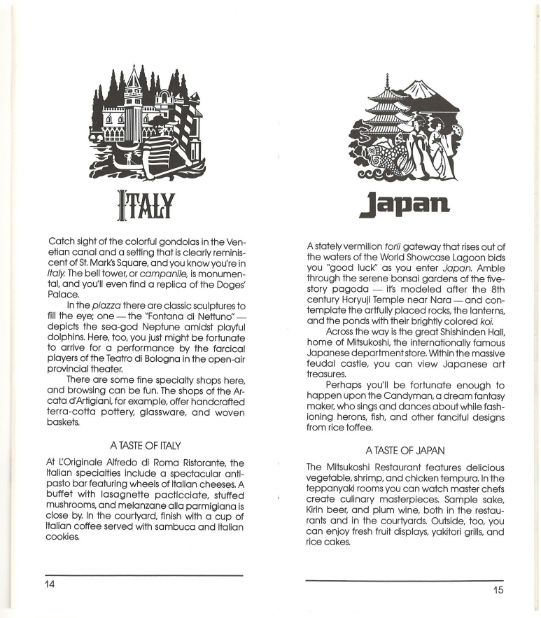 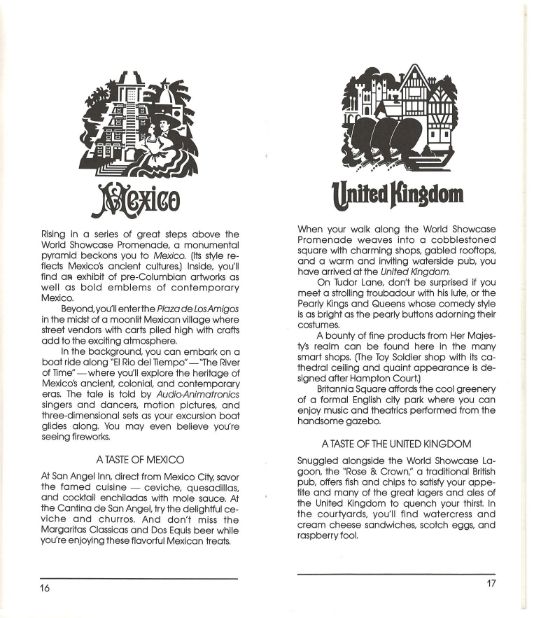 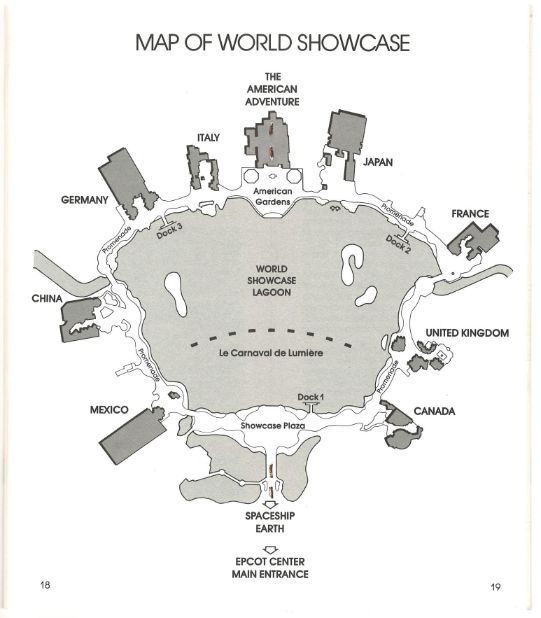 World Showcase, 1982. You may notice some Moroccan or Norweigan-sized gaps in this map, but those pavilions were still years away. 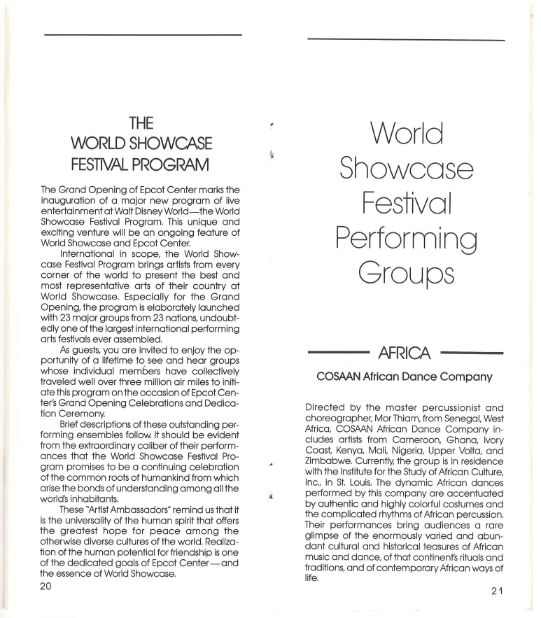 If you read our recap of the Eastern Airlines magazine supplement about EPCOT Center, you may remember an ad for all the airlines that brought the performers for this very festival. 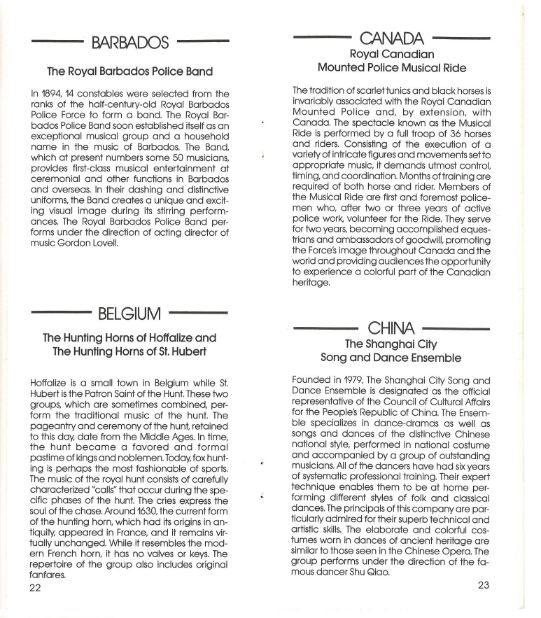 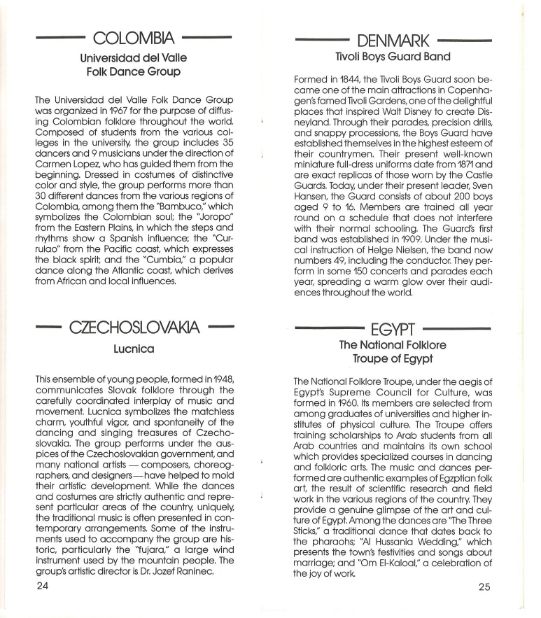 Dancers, singers, and bands of all kinds came for the ceremony, including a Belgian group of hunting horns, and the Musical Ride of the Royal Canadian Mounted Police! 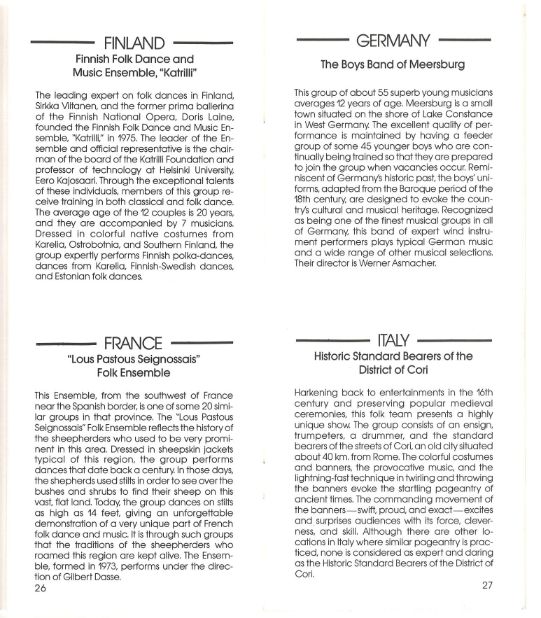 Do you like flag twirling? Head to the Italy pavilion! 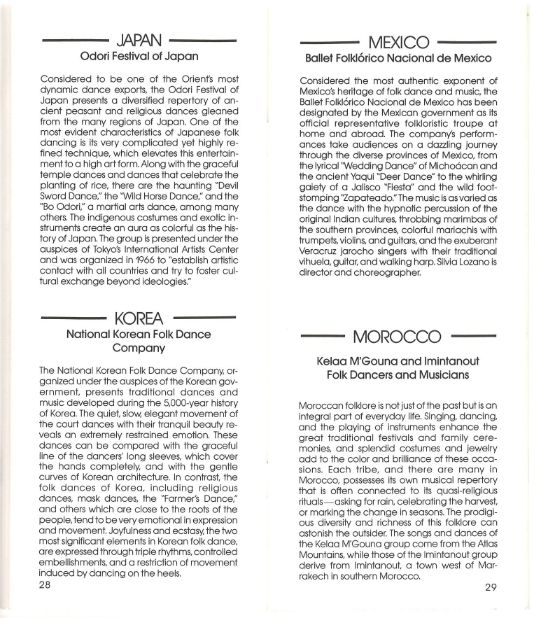 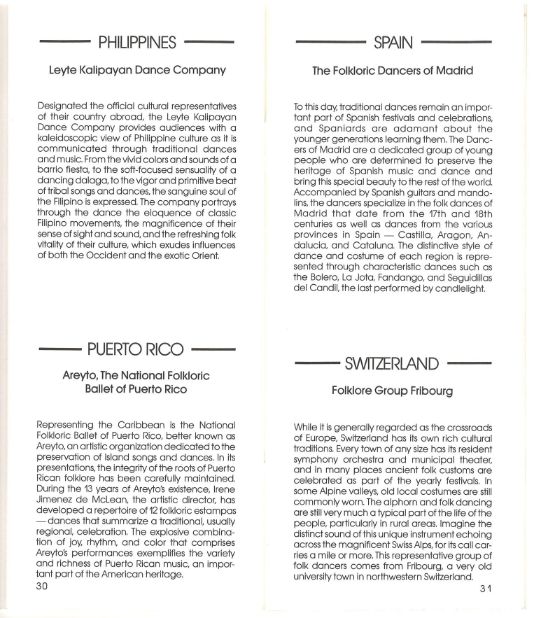 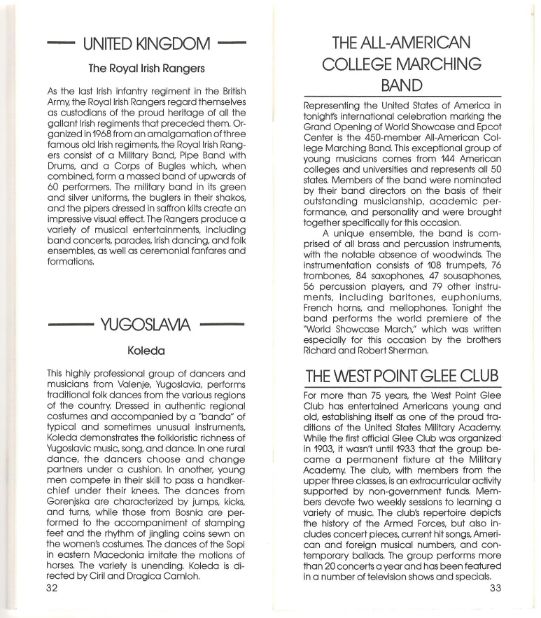 The All-American College Marching Band performed “World Showcase March,” a composition by Disney Legends Richard and Robert Sherman. It’s one of those songs I’ve always wished I could hear. 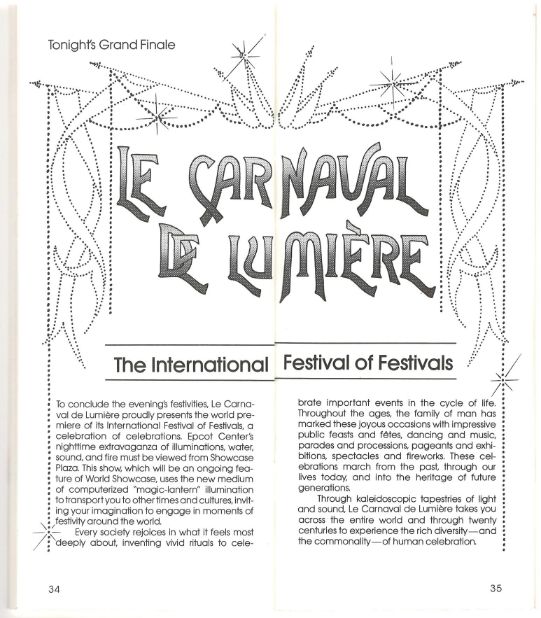 And finally, we get to the night’s finale ultimo, Le Carnaval de Lumière. Dubbed as “a celebration of celebrations,” the nighttime spectacular utilized “computerized ‘magic-lantern’ illumination” along with music and water and fire effects to show festivals and celebrations from around the world. 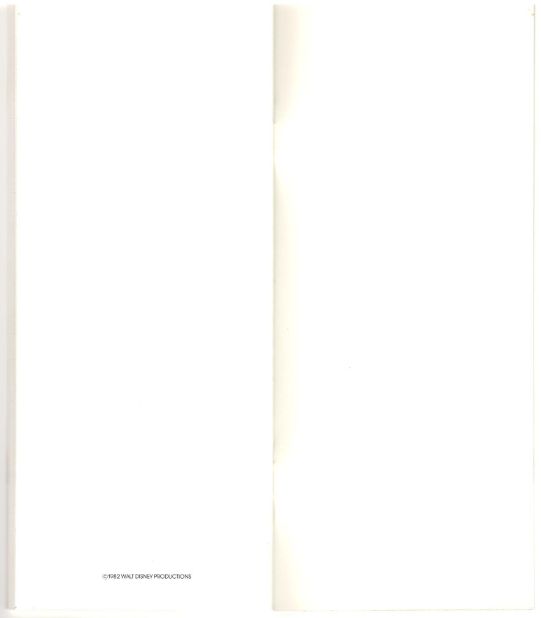 And with that, the event and (and this program) came to a close. The dedication of World Showcase sure sounds like a party for the ages!