We’re back at one of our favorite ongoing projects on property, probably because it’s among the few that are still ongoing. The rebuilt and remodeled McDonald’s near Disney’s All-Star Resorts at Walt Disney World is just weeks away from reopening, it seems, and we recently checked in recently to take in all of the last-minute touches being added. 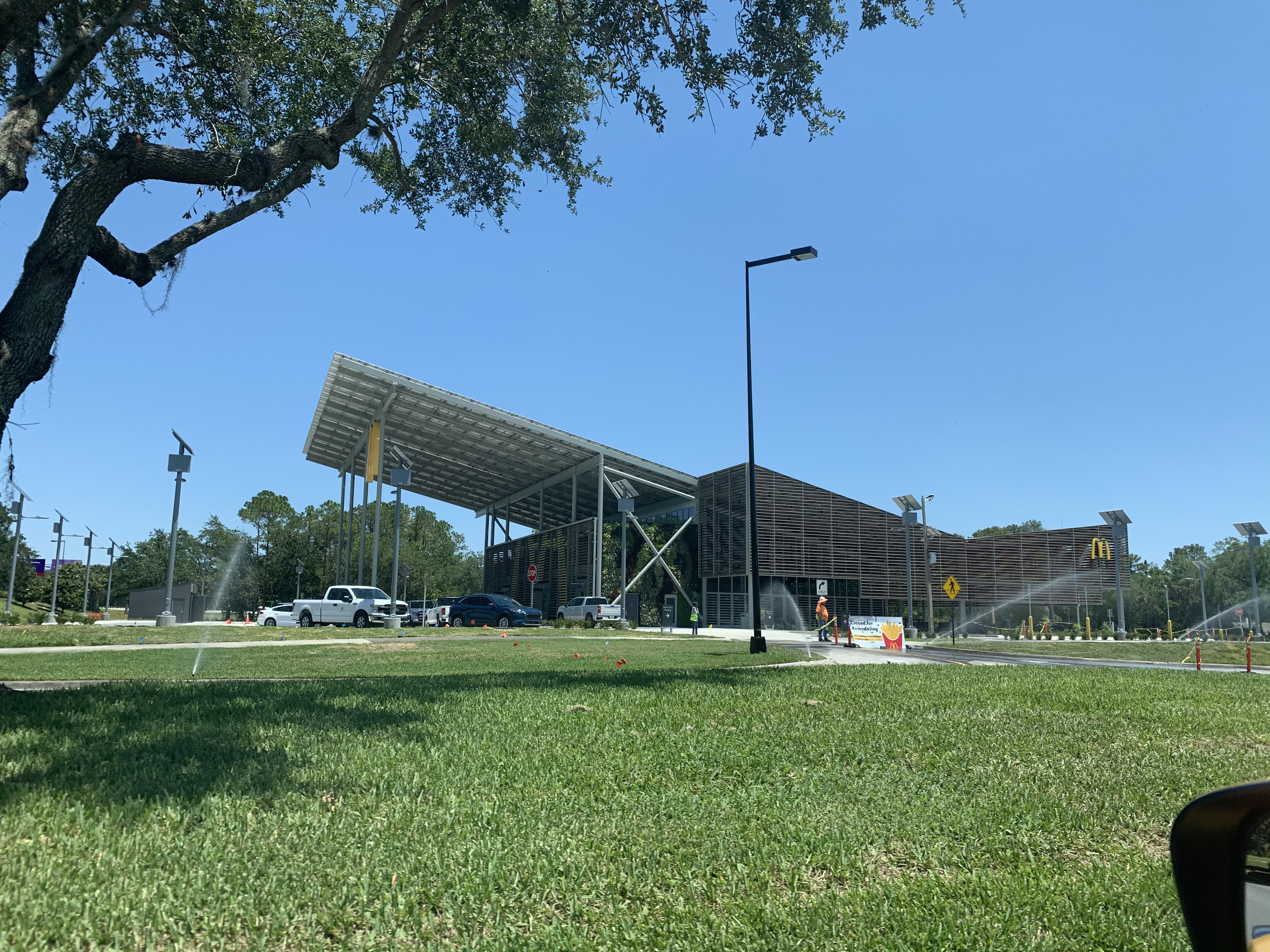 The McDonald’s, which is located at 1596 W. Buena Vista Drive, is one of the first things guests see approaching the gates of Disney’s All-Star Resorts. While the resorts remain closed, it’s likely we’ll see this McDonald’s eventually open under Phase 1 or Phase 2 with limited indoor seating, mostly outdoor seating, and a Drive-Thru. 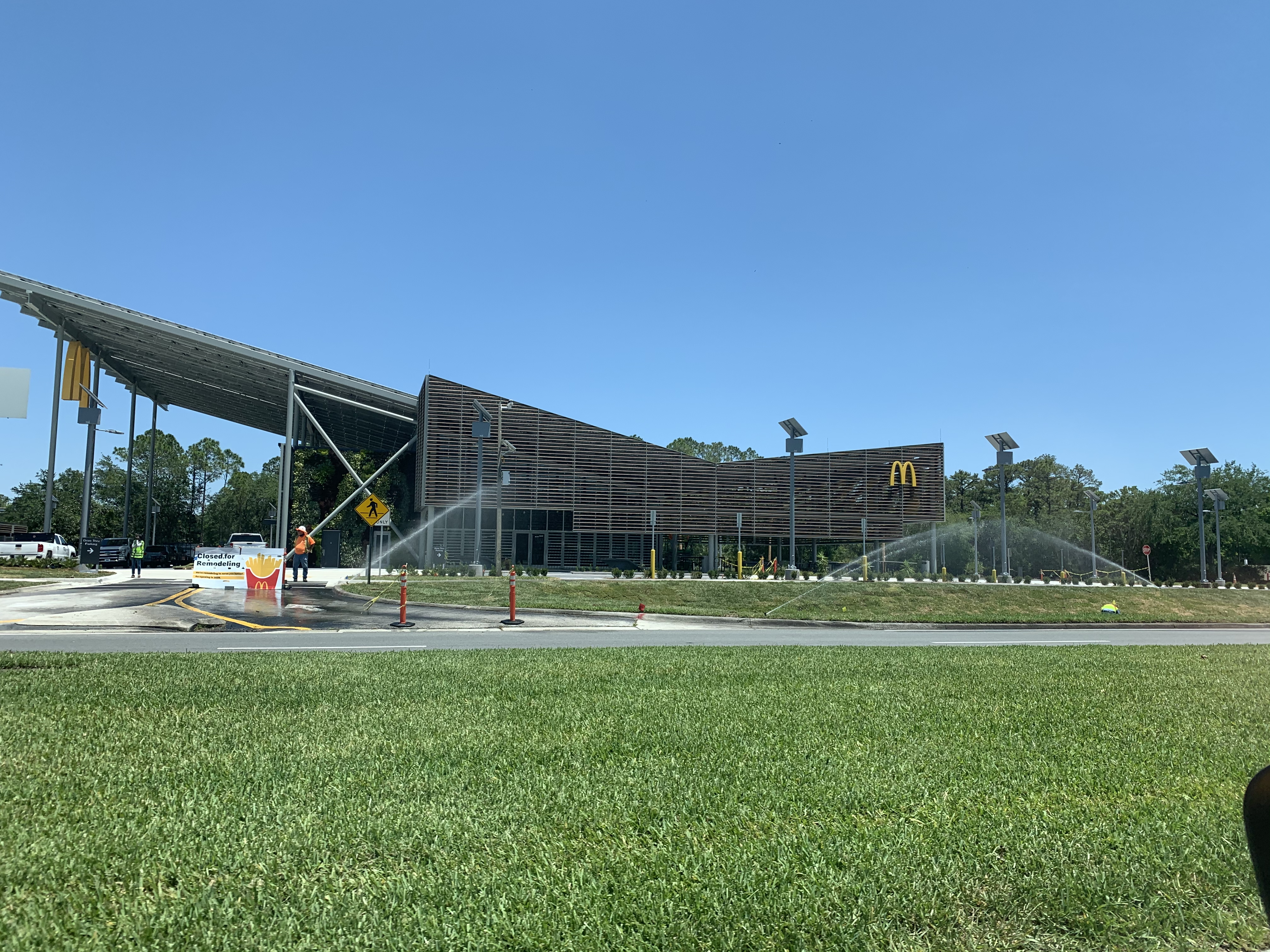 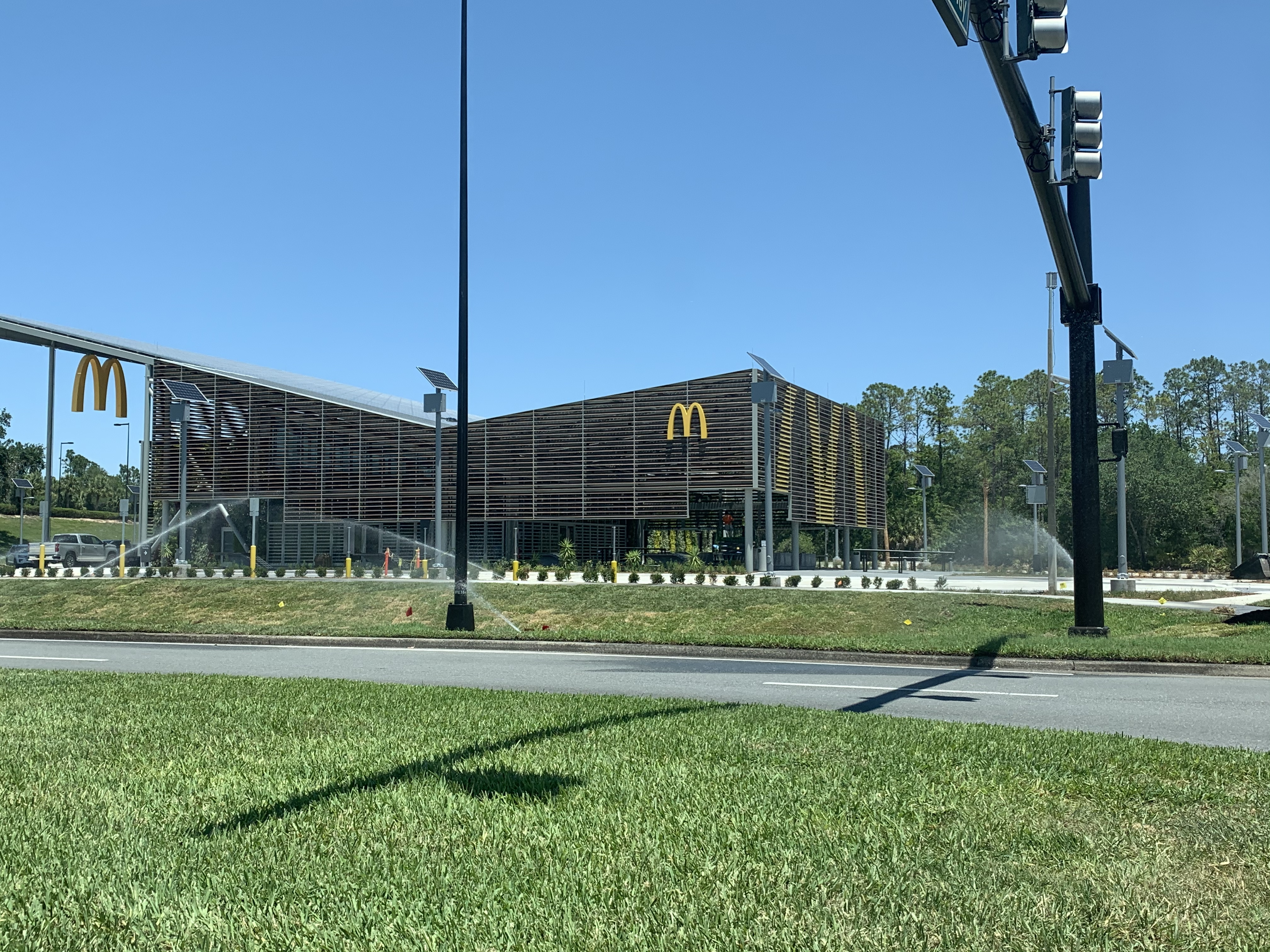 All along the perimeter of the McDonald’s, additional solar panels power the parking lights. 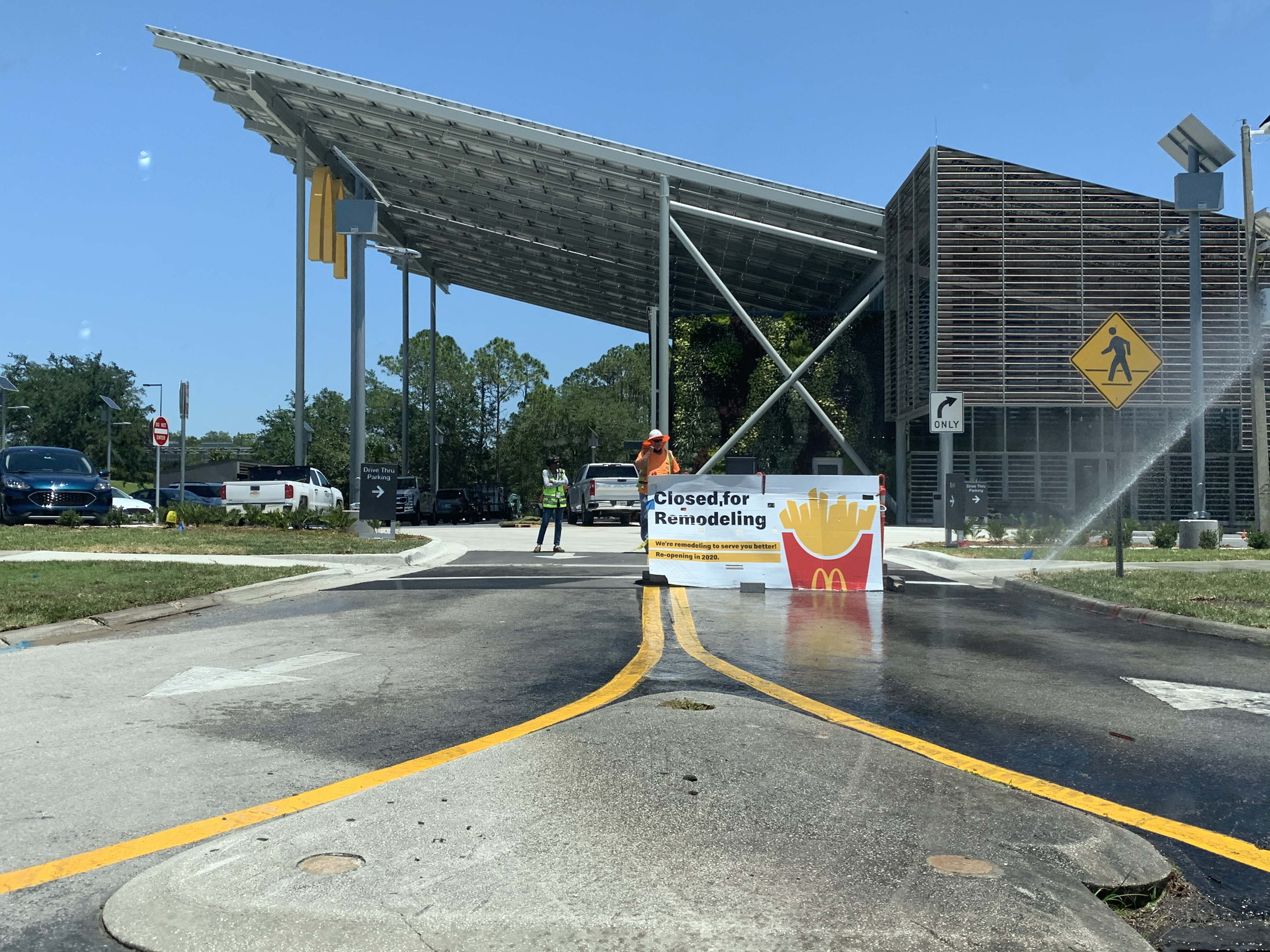 Despite so many construction projects being halted during the pandemic, construction remains active at the McDonald’s, with contractors on site overseeing the final touches. 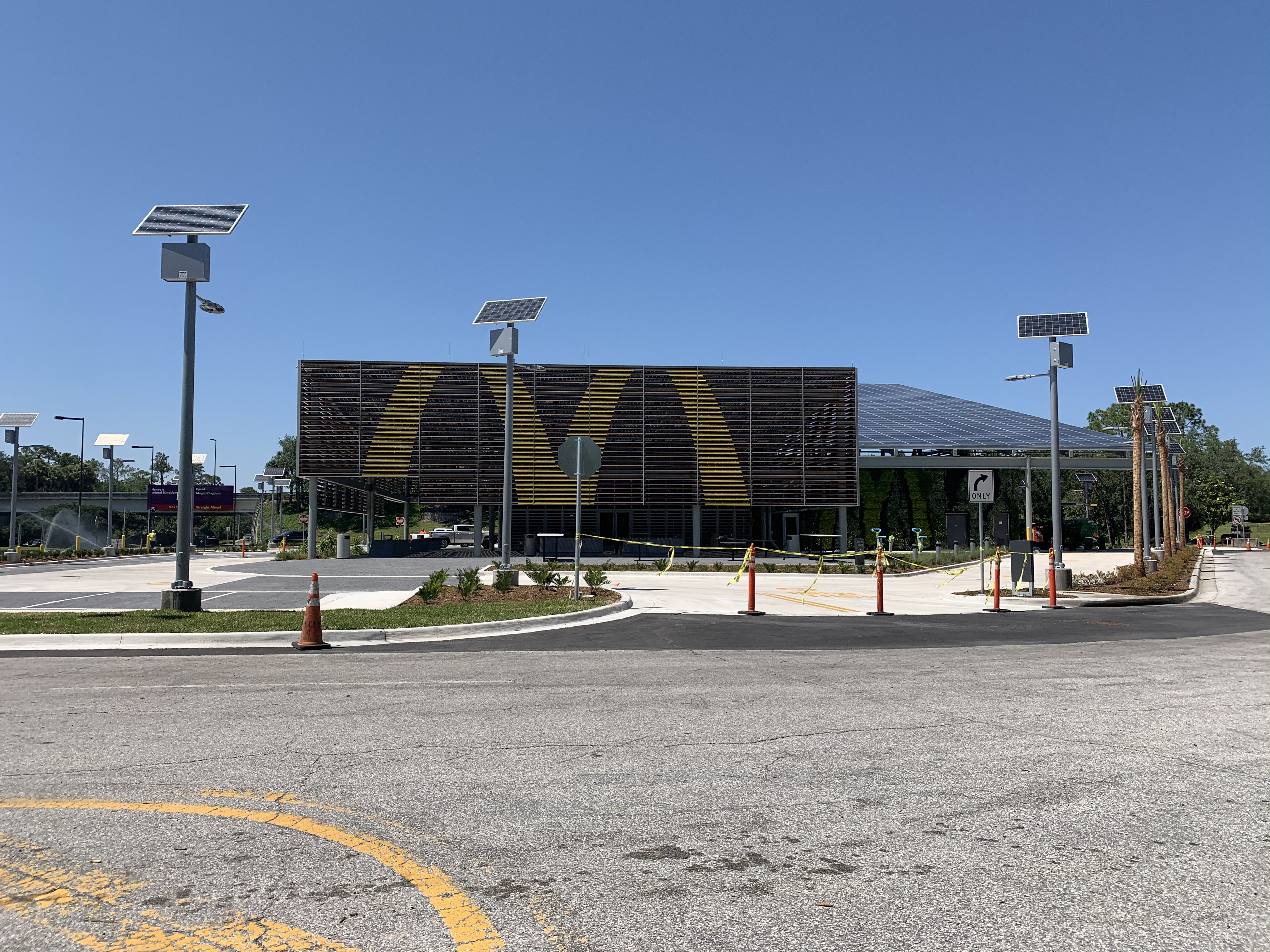 The wooden slats that make up the larger, rectangular portion of the building features the McDonald’s logo in bright yellow, contrasting against the brown hues. The overall theme of the building’s design has a heavy “eco-friendly” vibe between the solar panels, wood accents, and lush garden walls… and that’s not the least of it. 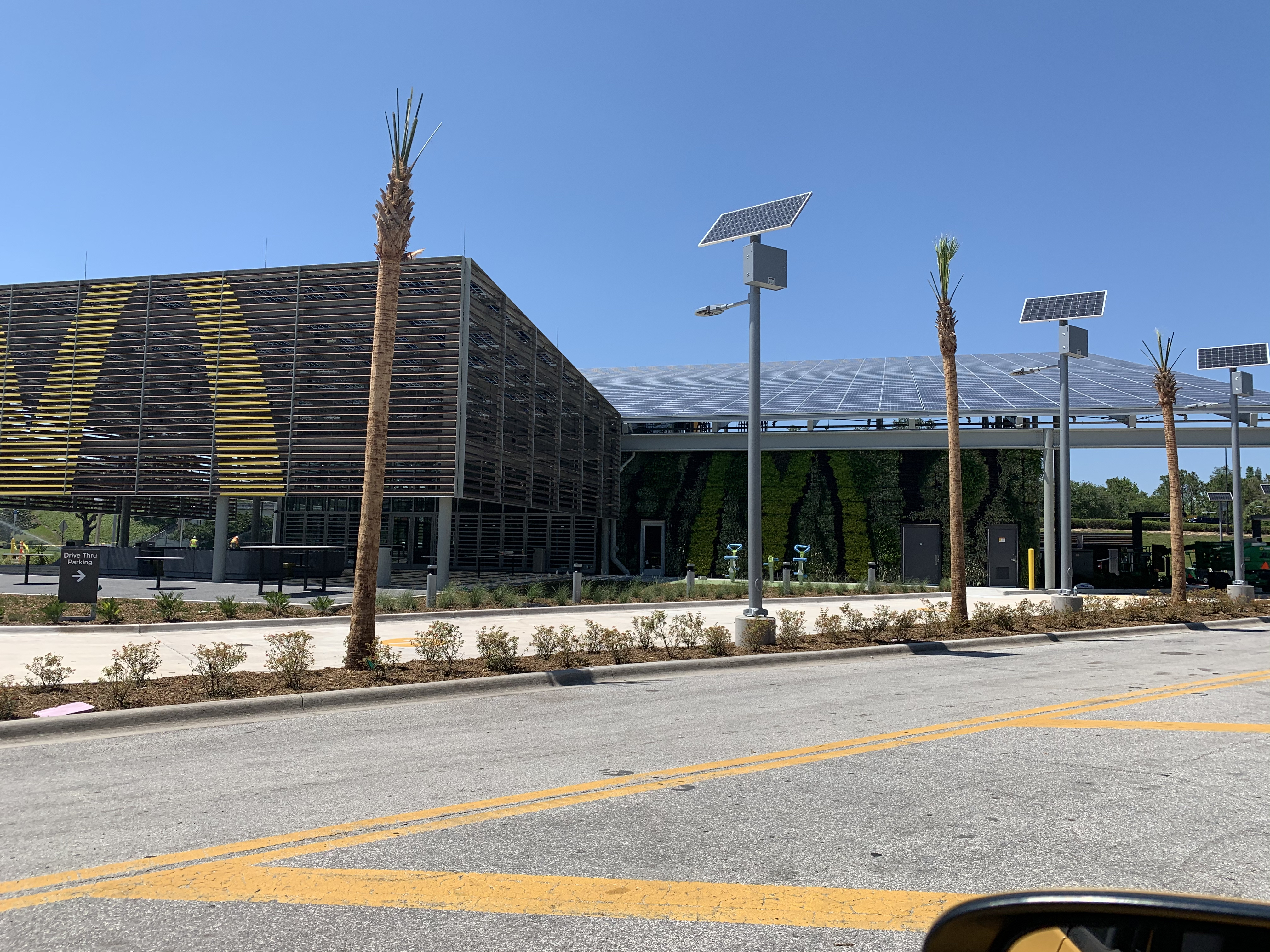 Off to the side, over by the entrance to the Drive-Thru and the parking lot, guests drive by a swirling garden wall with a McDonald’s logo in vibrant green. You can also see the full expanse of solar panels along the roof. 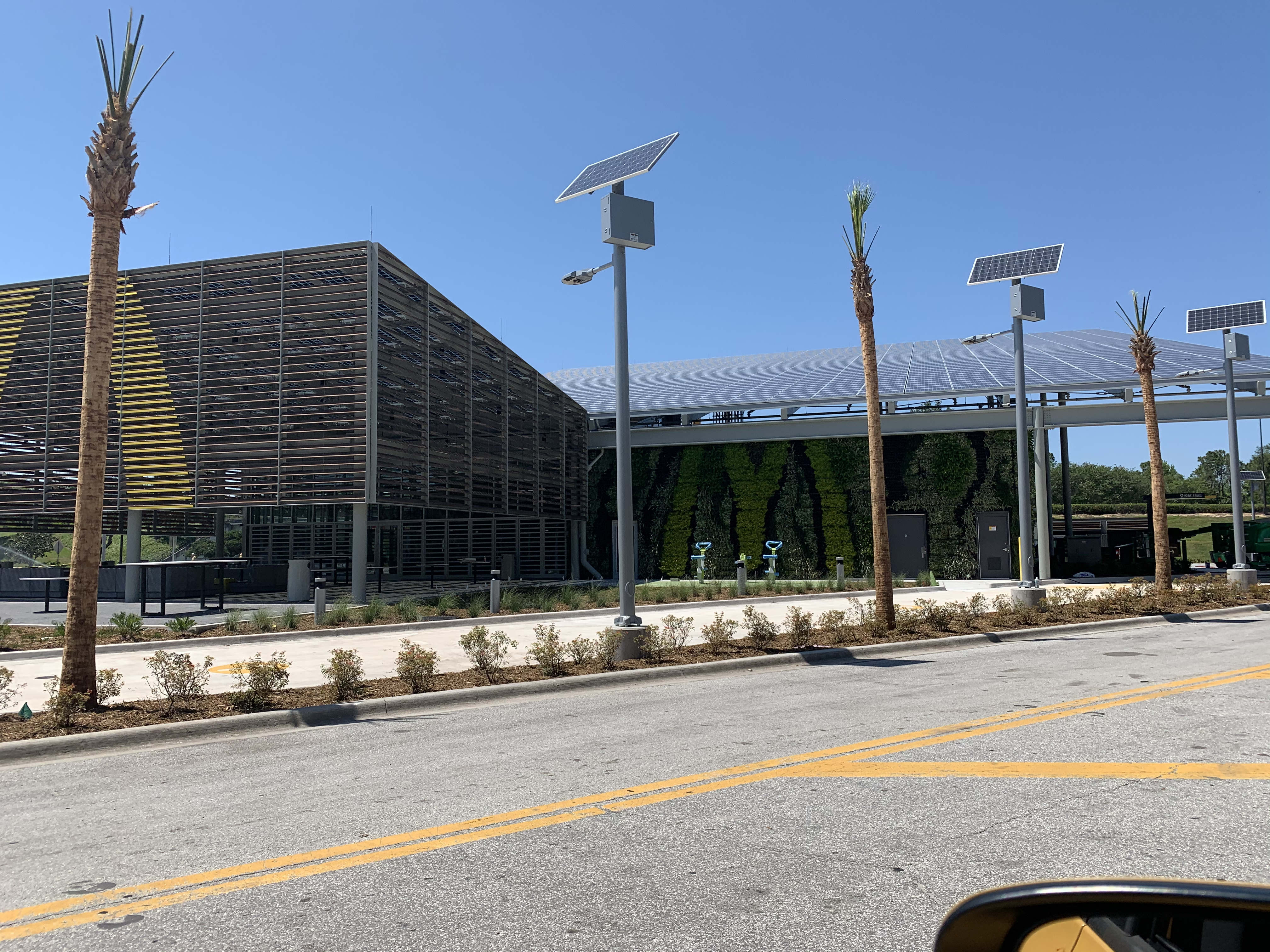 However, those two smaller units on the ground caught our eye… 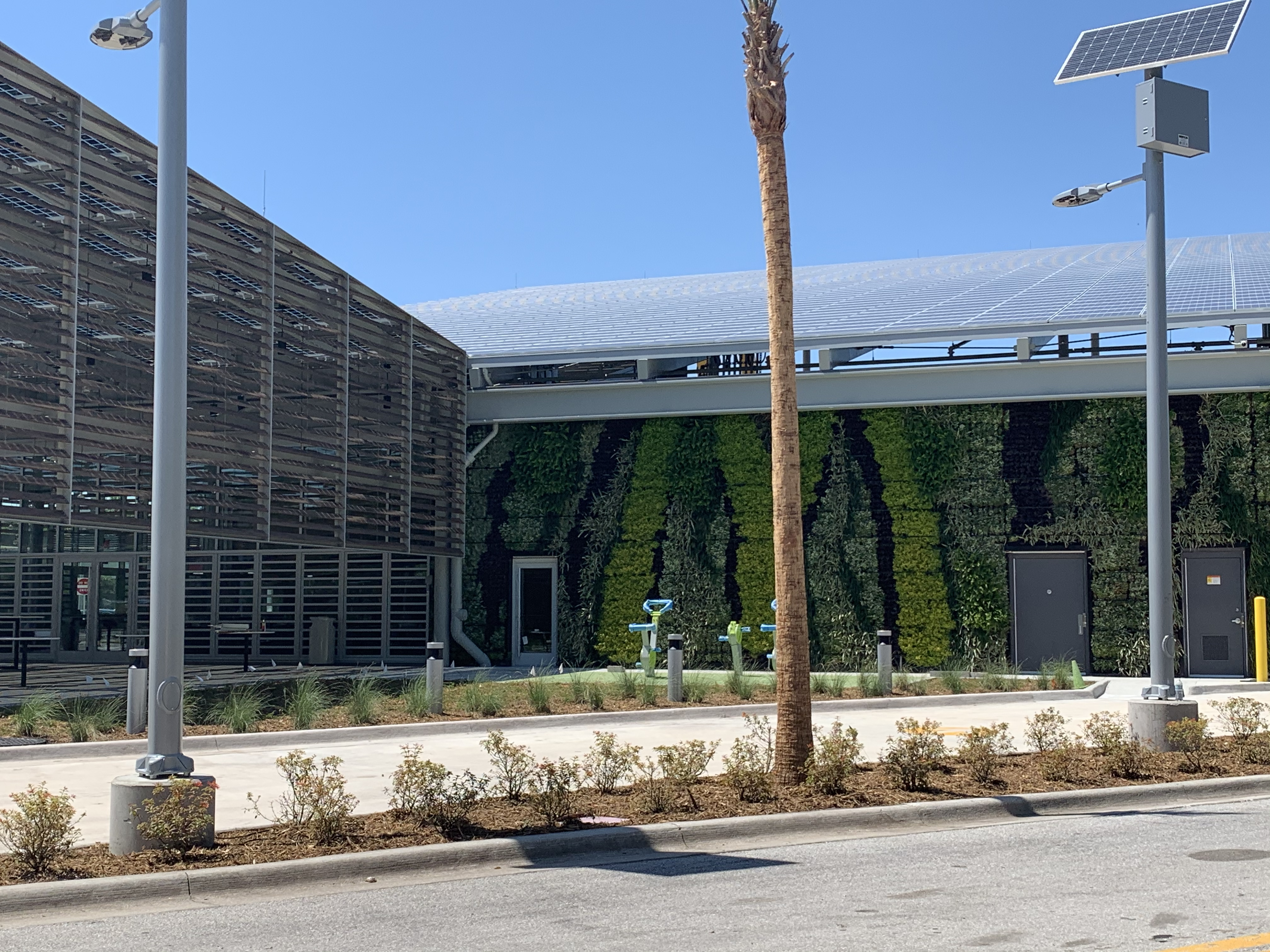 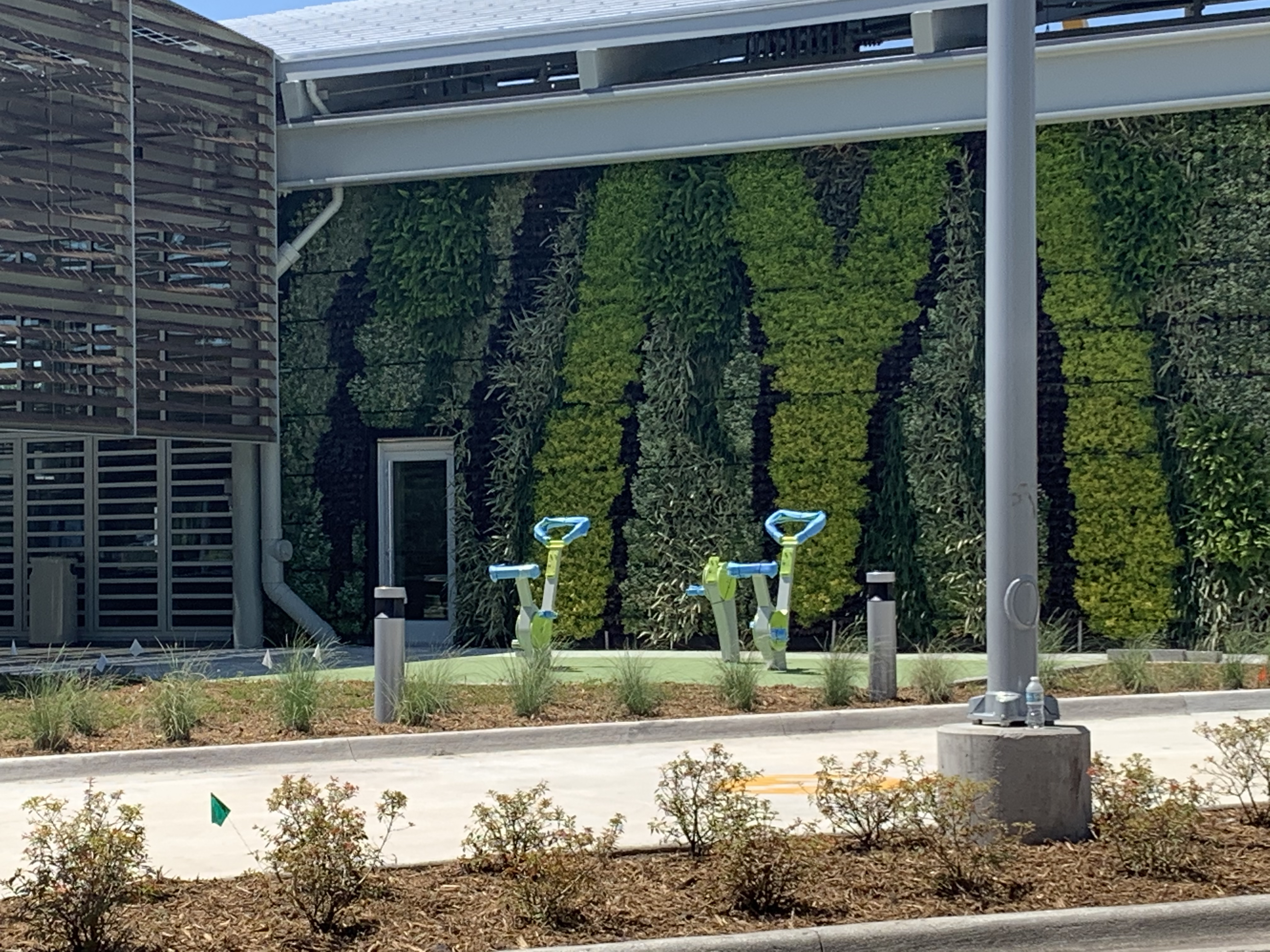 Upon closer inspection, it seems they’ve installed a small activity zone, with a platform covered in astroturf and bright green stationary bicycles “parked” outside. Could this be their updated version of a PlayPlace? It wouldn’t be the first time McDonald’s tried adding exercise equipment to their restaurants. Back in 2006, it began replacing its PlayPlaces with “R-Gyms”, geared as fun exercise areas in lieu of less-active ball pits and slides. (It’s a shame we come to debut these in a time of avoiding high-touch zones like interactive exhibits, really.) 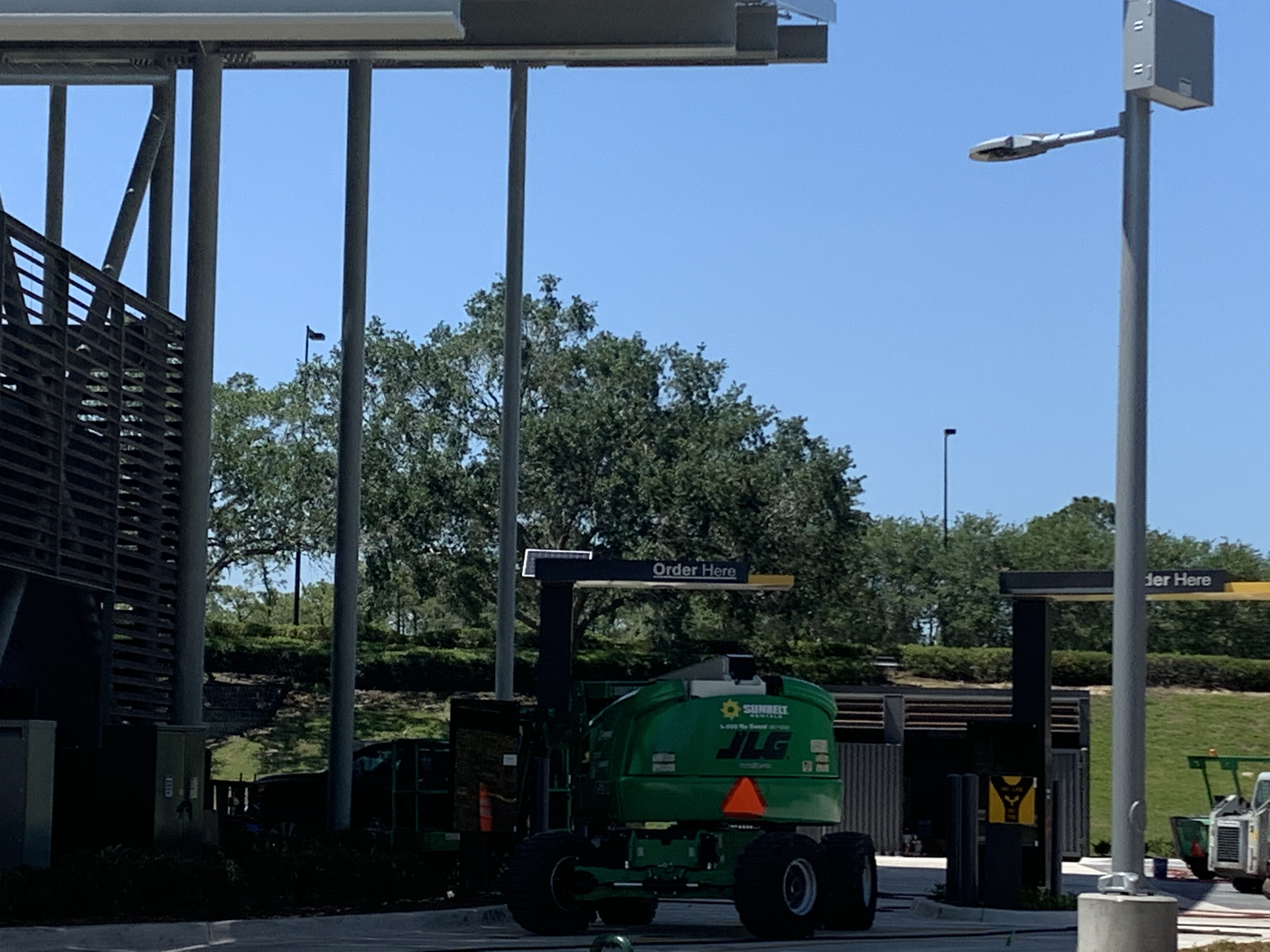 The Drive-Thru will feature two ordering bays that split up into a “Y” formation. 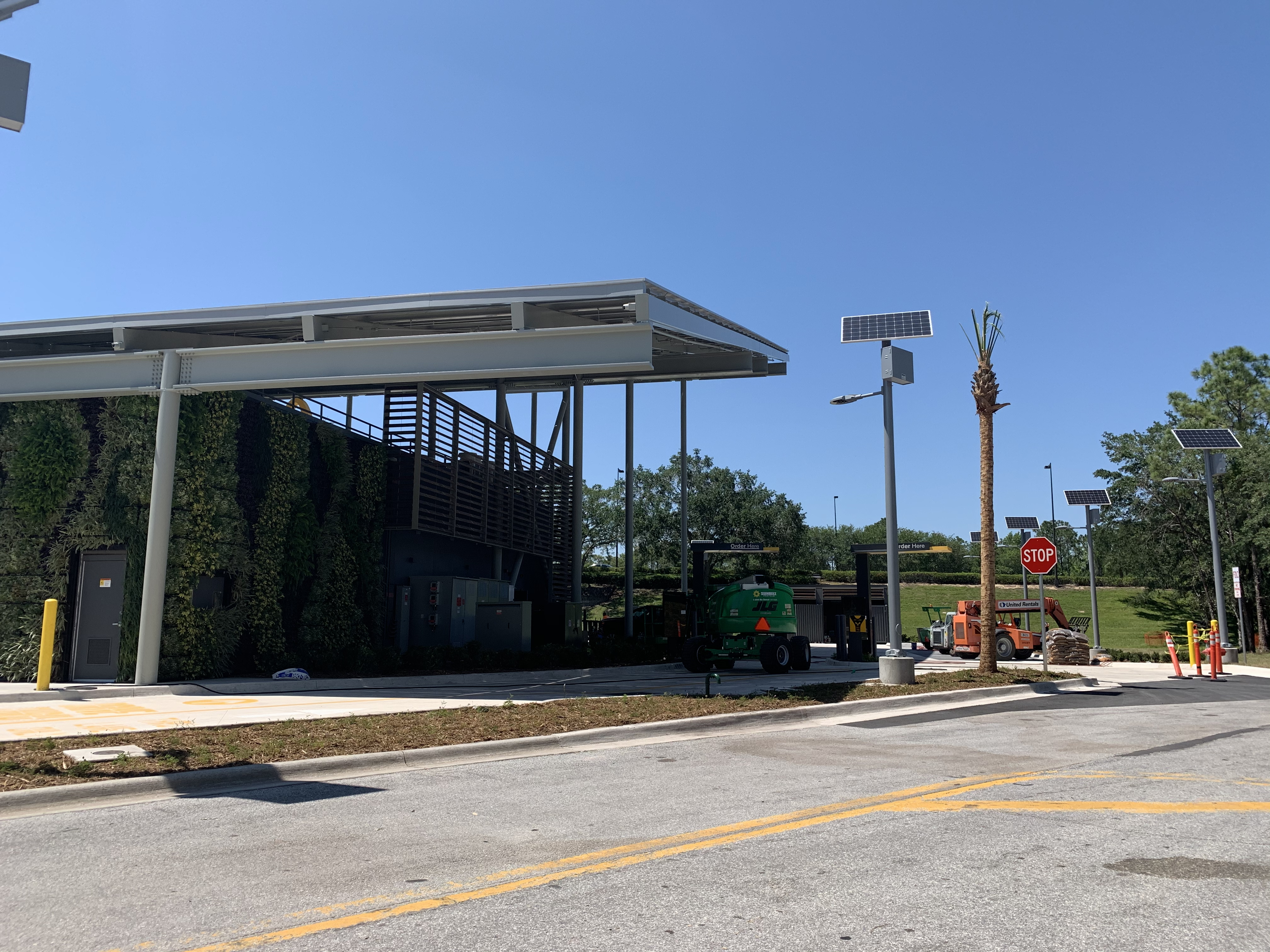 You can still see some high-reaches parked by the Drive-Thru as final touches are added. The garden wall wraps right around the corner. 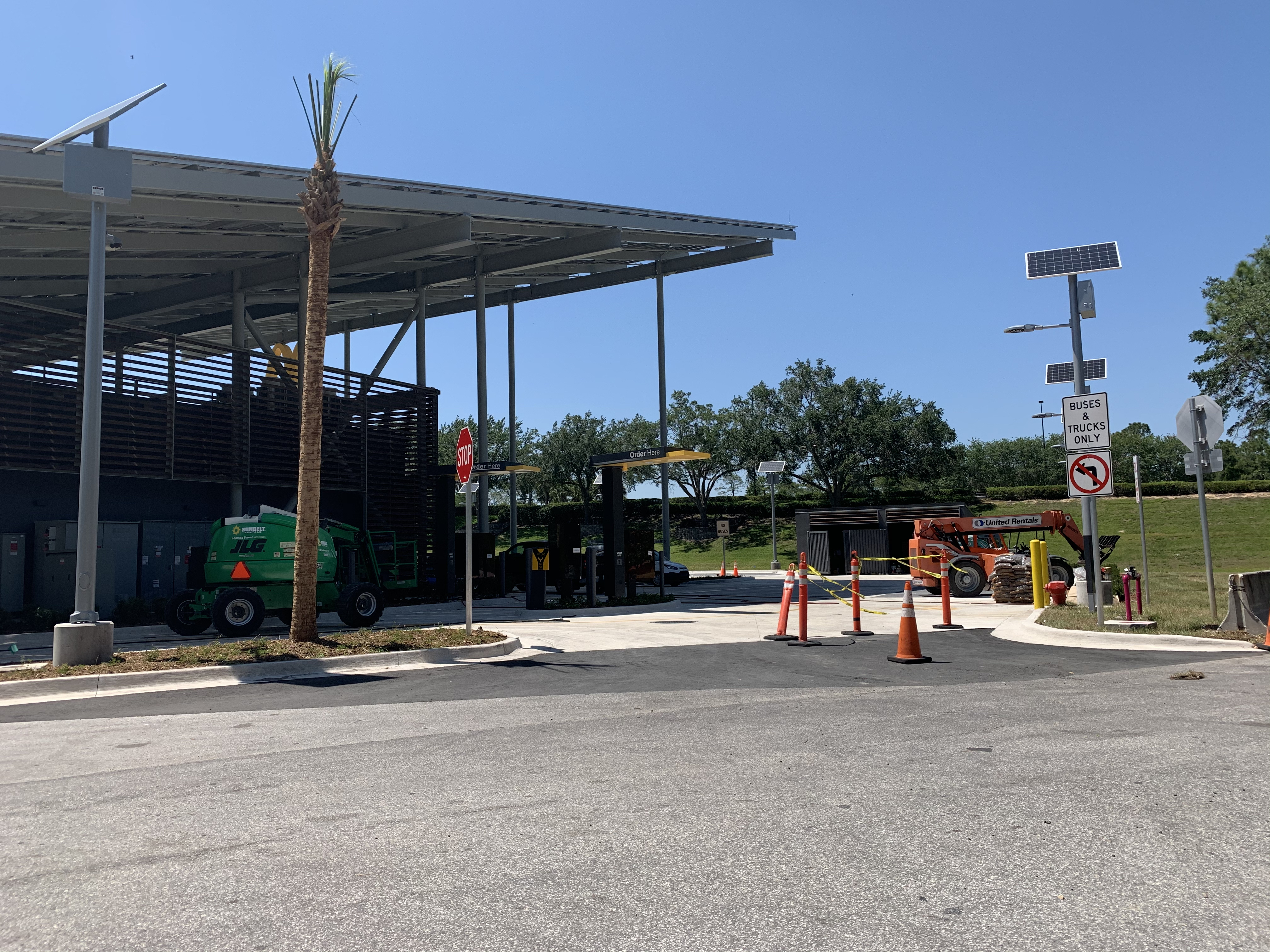 Buses and trucks will also get their own dedicated lane to enter the parking lot.

This new McDonald’s replaced its former 2009 version after a number of makeovers across the years. Many may recall this McDonald’s by its former wacky exterior featuring larger-than-life figures of Ronald McDonald, Grimace, and anthropomorphic menu items, like fries, Happy Meals, and McMuffins. The McDonald’s originally opened back in 1998, a year before the opening of Disney’s All-Star Movies Resort, which marked the completion of the All-Star Resort complex.

This McDonald’s remodel was announced back in October 2019, and promises to bring a “redesigned, more elevated experience” (for a McDonald’s, anyway) upon reopening. Given its current progress, we expect it to reopen by the end of summer at the latest (if not before the parks.) What do you think of the new look? Let us know in the comments.

Next
Events and Reservations at Walt Disney World, Including Disney Villains After Hours, Currently Unavailable Until July