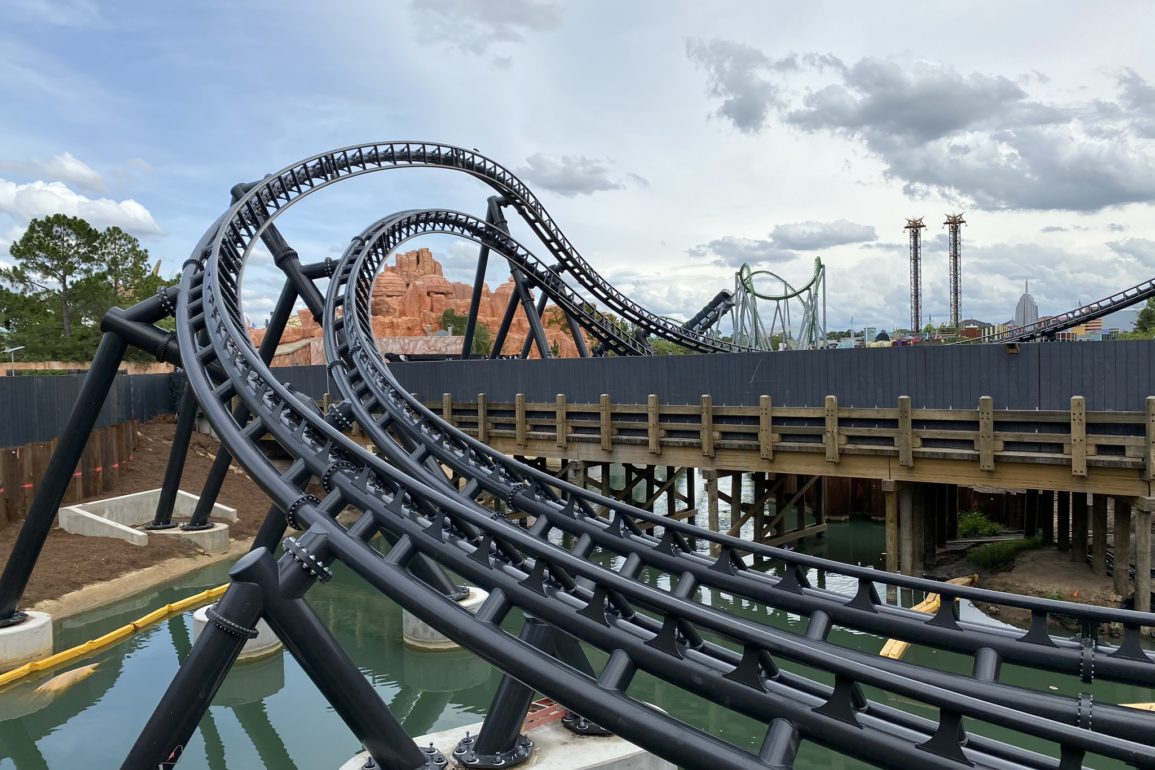 The Jurassic Park River Adventure at Islands of Adventure has been both thrilling and terrifying guests for over two decades. Now, just as the movie franchise has received a spin-off, the lone-thrill attraction of Isla Nublar is being joined by an all-new, roller coaster attraction just next door. That being said, you wouldn’t know this because Universal has been fairly silent on the project.

This currently unnamed coaster has been under construction since last year, yet now the Universal Studios Orlando parks have reopened, we were able to get a closer look at what progress has been made.

A zero-g roll has been installed outside of the Jurassic Park Discovery Center. it’s nice to see it won’t block the view over the lagoon of the gorgeous building.

Supports loom high over the island, presenting what will be a new icon of the park, another coaster like Hulk that will be seen on the waterfront from many places around the lagoon.

It appears that guests will be able to hang out in a courtyard near this zero-g roll, in the shadow of the Discovery Center.

Inside Jurassic Park, this is the scene outside of The Burger Digs. Gone is the JP car photo-op with a T-Rex (the car is now oddly placed near a smoking section) and the old Triceratops Encounter/Raptor Encounter spaces. This load/unload and entrance/exit of the new attraction should be in this vicinity.

Coaster supports and steel building structures are starting to dominate the Jurassic Park skyline, presenting a land in disarray.

What looks like the beginnings of an elevator shaft can be seen. This would be necessary to make the attraction ADA compliant.

This grey structure rising will supposedly contain a show scene for the ride.

Construction is quite active during operating hours.

Track is starting to scale every support.

The track on this side comes close to Pteranodon Flyers and Camp Jurassic.

High cranes can be seen towering over the whole area, here seen above the Dinostore and Jurassic Park Discovery Center.

A walk down to the pathway near the smoking section gets you pretty close to the tracks.

I hope they put some more pieces here, or this Jurassic Park may suffer the same fate as the one in the movie.

What is most jarring about this project is the proximity to Hogsmeade and the Wizarding World of Harry Potter. This mass of tracks is just feet away from the outdoor seating area of Three Broomsticks. Perhaps this is a little revenge from John Hammond for Hogwarts ruining the skyline in his park, not to mention the Forbidden Journey extended queue which is basically in Site A.

You can see how close the track is to the fence here. It will be nice to have a roller coaster zooming by at speeds up to 70 miles per hour while you drink your Butterbeer, but it isn’t exactly thematically consistent.

Are you excited for the newest thrill ride speeding into Universal’s Islands of Adventure? Stay tuned to WDWNT for more updates as the attraction construction continues.