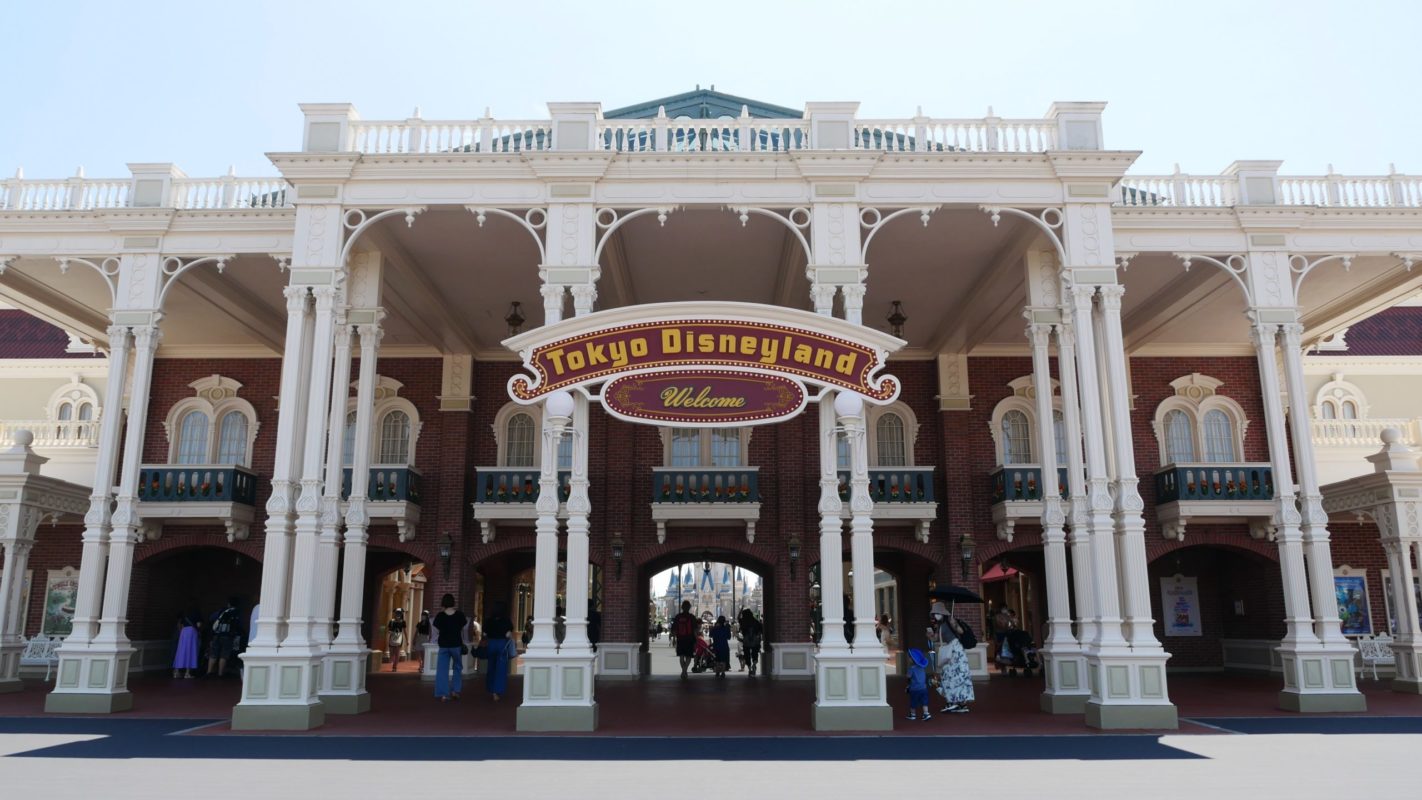 We’re just over a month and a half after Tokyo Disneyland reopened to the public on July 1st, so why don’t we check out the latest from the park? We caught a few new surprises, as well as some issues that might be concerning. So, let’s take a journey through the Kingdom of Dreams and Magic this lovely (and hot) August day!

With Tokyo Disneyland staggering entry based on ticket price, we were lucky to enter the park at 8 am. Through most of the day, the park was quite calm, with crowds feeling rather mild and wait times (except for Splash Mountain) almost entirely under 30 minutes. It’s only after the 2 PM admissions enter that the park starts to feel a bit over-crowded. Since there are no seasonal events for a while, the default Welcome sign is in place at the main entrance.

If you come to World Bazaar at any other time than an entry time or park close, the area is virtually desolate. Everyone in the park is generally in line for a ride.

With no parades (except the occasional greeting), the hub is also always empty, even after the 2 pm crowds arrive. There’s still no word on when Dreaming Up! and Tokyo Disneyland Electrical Parade: DreamLights will return, but we hope it’s soon!

Also with no seasonal events, the central planter in the hub just rotates through different arrangements. The red flowers are a stark contrast to last year’s jungle-style plants for Donald’s Hot Jungle Summer.

In order to facilitate deep sanitization, attractions occasionally close throughout the day. Touch-heavy attractions like Monsters, Inc. Ride & Go Seek! and Buzz Lightyear’s Astro Blasters are frequent victims of this.

Fortunately, we can still do our part to stay clean by using hand-washing stations throughout Tokyo Disneyland. They even dispense cute Mickey silhouette-shaped soap bubbles! In January 2020, Meeko helped teach Tom how to wash his hands properly, and you can learn too!

I feel bad for the Cast Members relegated to the corner of Tomorrowland to sell balloons, but I did see some Guests wander over there occasionally. There’s not a lot of places for them to go, Tomorrowland is definitely lacking in shade for the hot, humid Tokyo summers.

Something we missed last time was this new popcorn wagon, seemingly replaced during the extended closure! The flavor of “salt” still hasn’t changed, unfortunately.

Cranes for the unknown project behind Tomorrowland are pretty easy to spot from inside the park. You can check out recent progress from outside Tokyo Disneyland in our latest Fantasy Springs construction report!

While wandering Toontown, I spotted this rather… questionable Roger Rabbit poster.

And in Toontown, it’s rather easy to spot the Fantasy Springs construction itself. Directly behind the Roger Rabbit’s Car Toon Spin show building is the construction for Tokyo DisneySea’s clone of Frozen Ever After. Space is indeed rather tight at Tokyo Disney Resort.

Even though summer programs and ride overlays are canceled, it’s nice that the wet spots in Toontown are still going for Guests that want to beat the heat. Just be careful with getting your mask wet!

Someday, the gates will open. Could it be this fall? We still aren’t sure about that yet. Tokyo Disney Resort sadly hasn’t made a specific announcement regarding the New Fantasyland expansion yet.

The beloved Tipo Tortas are now back at Tokyo Disneyland! Village Pastry in (original) Fantasyland reopened a couple of weeks ago if you’re craving the full-size treat after sampling it at the Crystal Palace dessert buffet.

Even though the Cinderella Castle refurbishment took six months, they didn’t really touch the lower half of the castle. I feel like they’ll have to do a separate repainting at some point soon because you can really see where the old vs. new paint is.

Thanks in no small part to the unbearable summer heat in Tokyo, Splash Mountain has carried the longest wait almost every day since the park reopened. The international coverage regarding the Princess and the Frog-themed overlay at Walt Disney World and Disneyland was probably a substantial attention-booster to the classic attraction as well.

After testing last summer, the Sparkling Mango & Citrus Tapioca Tea is a part of the full-summer menu at The Gazebo. Curious how it tastes? You can read our review from last year when they did a test run!

If tapioca drinks aren’t your speed, you can visit a number of snack carts and booths around the park to get ramune soda-flavored crushed ice cubes. They’re surprisingly refreshing, actually! And not a bad deal for being ¥300 ($2.81)!

Back in January, we pointed out that Club 33 was behind planters. It seems now that some changes have been made to make the exclusive club less conspicuous. Sadly, the door no longer features the 33 insignia for those in the know, ending a design seen (as far as we know) since the 1980s.

That design has been moved to the call panel on the wall.

Through the day, passersby in Tomorrowland could hear Cast Members testing the upcoming The Happy Ride with Baymax attraction. The lights were left on at night, giving a bright look into this future spinning attraction.

Let’s talk about social distancing at Tokyo Disneyland. It’s a rather small park and doesn’t handle spacing well, especially since many attractions are densely packed right next to each other. The upshot of this is that queue lines extend far further out than it seems the Oriental Land Company anticipated, leading to Guests having trouble properly following social distancing recommendations. In the queue for Splash Mountain, for example, there are no markers this far out, so social distancing seems to break down. Cast Members were not doing a particularly effective job at enforcing distancing, or mask-wearing for that matter. This has been a rather common theme at the parks for the past month as capacity has dramatically increased.

In some dining locations, tables are not spaced out or marked off-limits either, leading to Guests congregating in close quarters next to each other, with masks off.

Granted, this isn’t always a problem. Some Guests are able to socially distance on their own, and sometimes Cast Members would also be more proactive about enforcing social distancing, such as in this line for Big Thunder Mountain.

But the vast majority of the time, if there were no social distancing markers, Guests just didn’t social distance. This line for the Haunted Mansion tells the same story. These pictures were taken in just one area of the park, but it was a common theme in almost every attraction queue park-wide.

Likely the worst offense, however, was this situation within the World Bazaar Confectionery near park close. Admission to the store was not being controlled despite the only entrance being staffed by Cast Members. Thus, the store got extremely congested, and Guests often bumped shoulders trying to navigate the store.

The queue for check-out largely crammed itself together as well. Social distancing markers only are in place close to the registers.

And once Guests reach the register line where markers are in place, social distancing just naturally reinstitutes itself.

At park close, many groups made little to no effort to separate themselves from others. You’d occasionally end up with gaps like this, but no real effort was made by Guests or Cast to keep Guests separate on their way out of the park. I suppose it doesn’t matter too much, since many Guests are just about to cram themselves on to trains at Maihama Station anyway at this point of the day,

And that’s the latest from Tokyo Disneyland! Don’t get me wrong, I definitely enjoy my visits to the park, but it definitely seems like there’s a lot of people, especially once the 2 PM ticket-holders/Annual Passport lottery winners are allowed inside. What was your favorite sight this time around? Let us know in the comments below or on social media!