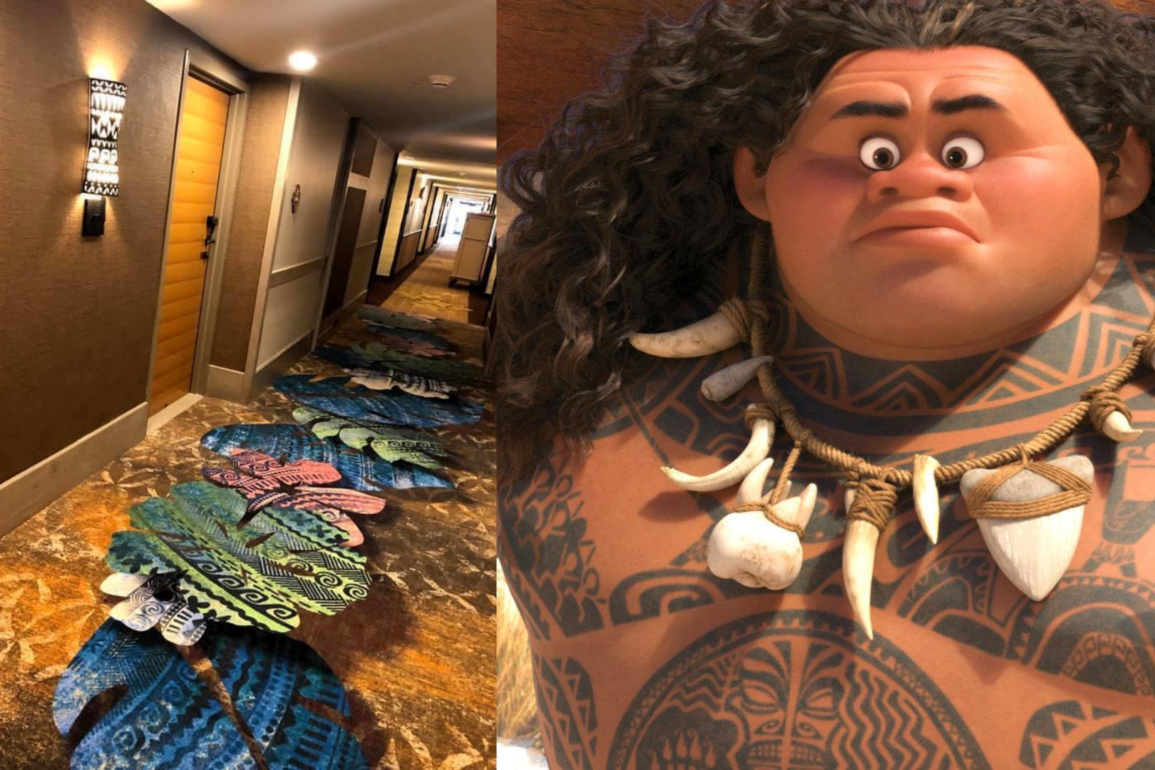 If you’re curious to get an idea of what the upcoming Moana-themed room redesign is going to look like at Disney’s Polynesian Village Resort, we have a special sneak peek at test rooms that, despite debuting sometime late last year, have remained unnoticed, and will likely not be seen completed until the resort reopens in Summer 2021.

Here at WDWNT, we’re no strangers to test rooms, as we uncovered the infamous Incredibles-themed rooms at Disney’s Contemporary Resort back in August 2019. It was a similar setup back then, too—a small segment of rooms with new carpeting, fixtures, and design tucked away in a relatively nondescript corner of the resort. Here, we can see a colorful leaf pattern with tattoo designs just like Maui’s from the movie. On the wall, sconce lighting also features a bronze “sleeve” of tattoo designs.

Here, you can see where doors have received different treatments. The ones seen in the first photo from the post feature a rich, warm wood tone with horizontal lines, whereas the door seen in the photo above is a pale grey wood, almost like something you’d see at a beach-themed resort. Earlier today, a Walt Disney World spokesperson confirmed changes to the rooms will include “a Pacific Ocean-inspired color palette as well as details, patterns and textures from Disney’s Moana, an animated film that takes place on the Polynesian island of Motunui.”

Here you can see where the segment of test carpet meets the original carpet in the hallway. You can see the current wall sconce design to the left.

And this is what the hallways currently look like at Disney’s Polynesian Village Resort, with the main decor in the halls being carved wood wall mouldings, and otherwise subdued carpets. Do keep in mind that the designs tested are not always the end result, so what we see when the resort reopens next summer may be different from what’s represented in these photos.

Between this, the Incredibles test rooms at Disney’s Contemporary Resort, and the sudden infusion of Beauty and the Beast at Disney’s Grand Floridian Resort & Spa, it seems all of the Monorail resorts are getting a dose of IP to further boost their popularity and reinforce Disney characters throughout all aspects of the Walt Disney World experience. We’ll continue to monitor the status of these enhancements, reimaginings, and refurbishments over the next few months.