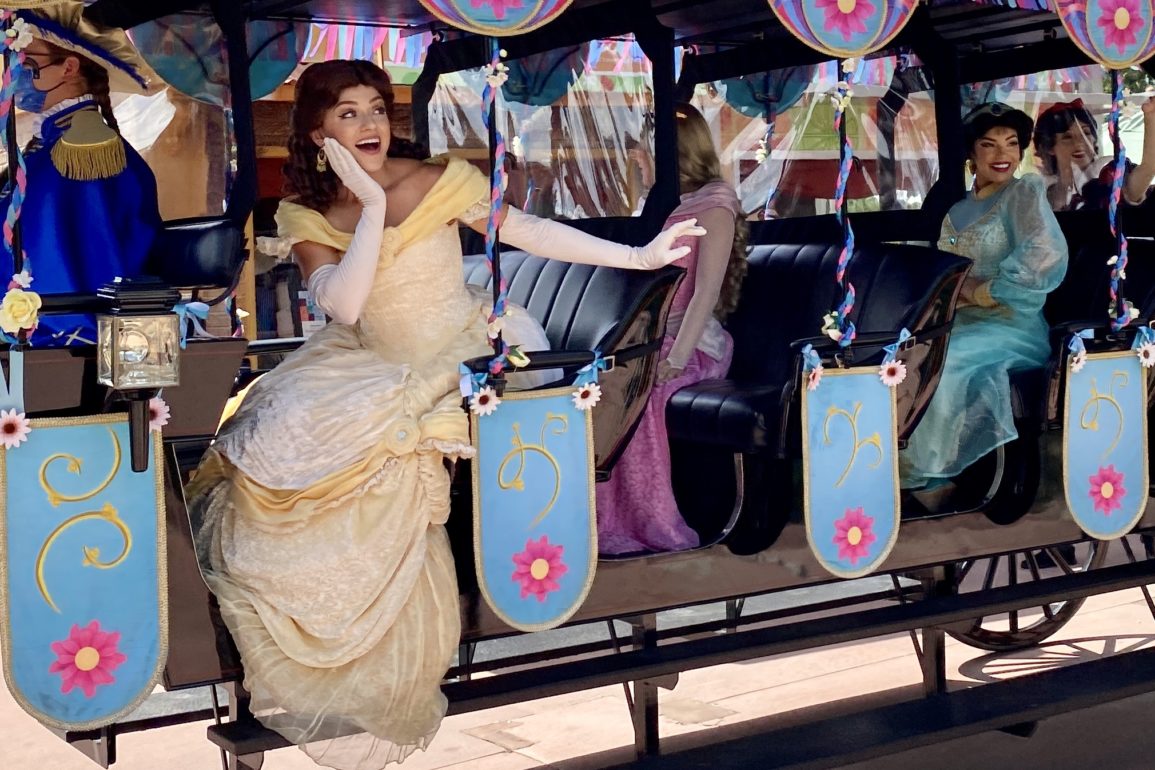 Hello from an unbelievably hot day at EPCOT! After a couple of days with ever so slightly cooler temperatures, today reminded us that we’re still in Florida, and we have a long ways to go until truly cooler weather is upon us. No amount of heat can keep us from having fun at Walt Disney World, though! Let’s get started!

We were hoping to cool off with a frozen concoction from Cool Wash, but they weren’t quite ready to open yet. Cast Members were busy stocking the machines and mix-ins, but the booth did not open today.

The Donut Box was also preparing to open, with new queue markers being laid down to accommodate a longer line of guests. This booth will hopefully open in about a week.

We have several construction projects that we’re keeping tabs on, and most of them had updates today. Work was being done at Innoventions East, with two workers welding a large beam side by side in this entrance area.

At Guardians of the Galaxy: Cosmic Rewind, workers were applying a fresh coat of what appeared to be cement to the wall with a scraper here.

The addition to the Future World West Restrooms appears to be nearly complete, with the exterior almost completed.

Demolition has begun on the interior of the former Electric Umbrella in Innoventions East, with much of the area already gutted. Huge sections of this building seem to be removed daily now.

At the front of the park leading up to the lucite pylons that will be a part of the new entrance fountain, scaffolding appeared midday close to the pylons. We wonder of the large scratch on the pylons that occurred shortly after their unveiling during construction will finally be getting repaired. Only time will tell!

In the France Pavilion expansion for the Remy’s Ratatouille Adventure, work has accelerated as the awning above the entrance to the attraction is prepared for the installation of the sign. We are eagerly awaiting its arrival!

While not strictly construction, the layout of the World ShowPlace Events Pavilion was altered to accommodate additional seating for guests. The colorful, curved false wall was pushed back, revealing exterior doors on the side walls, and giving more room to set up tables and chairs.

At Project Tomorrow beneath Spaceship Earth, not only were the upper screens on, but the globe was on for guests to enjoy. We haven’t seen this on for some time.

Despite being slated to only open on Saturdays, the Taste of EPCOT Islands of the Caribbean booth was open today. We also noticed that the Alps and Spain booths were open, as well as the Block & Hans kiosk in American Adventure, despite all three usually being reserved for weekends only.

Tables and chairs have been placed around the United Kingdom Pavilion, offering guests new places to sit and relax, and perhaps enjoy some food and drink. Though no official reopening date has been announced, with the seating area for the Yorkshire Fish & Chips booth currently serving as a Relaxation Station, we hope the arrival of this additional seating could herald the imminent reopening of the popular food booth. After recently getting their own ear headband, they have to reopen, don’t you think?

Disney Traders has had the “Entrance” and “Exit” signs removed from it’s doors, allowing guests to enter and exit from any of the three doorways of the shop. While capacity is still being monitored within the store, the flow of traffic in and out of the store is not being managed as it was before.

We found these beautiful smiling faces on the Princess Promenade today, and were so glad to have stopped to wave hello.

With Les Chefs de France slated to reopen in just over a week, the menu board outside of the restaurant has been updated with the reopening date and a QR code with more information about the reopening and the menu options.

We found a few new pieces of merchandise today, which were all small but mighty. First were two new Limited Edition pins, both Star Wars themed. The first was this Black Spire Outpost pin, which retails for $17.99.

The second Limited Edition pin was this Rise of the Resistance rebel pin, also retailing for $17.99. Both can be found at Pin Traders.

We’ve found a lot of Haunted Mansion merchandise recently, but none so small as this Madame Leota keychain. We think it’s the perfect piece for the Haunted Mansion fan on the go. This keychain retails for $12.99 and can be found at Mouse Gear.

Part way through the day, Disney experienced a widespread server outage, causing Mobile Order to be unavailable. With most restaurants and quick service food locations operating almost exclusively through Mobile Order in order to promote social distancing, this caused quite a large impact on the guest experience and the flow of operation at dining locations. Lines quickly formed as guests tried to order food in person with only one or two check out lanes available. Thankfully it was resolved before the day was over.

A new dish has been added to the Taste of EPCOT International Food & Wine Festival booth in China—the Crispy Fried Shrimp. Being fans of shrimp we were excited to try this dish, and while we enjoyed it, it was not one of our favorites. For more pictures and our full review, see our article here.

Previous
VIDEO: Take a Peek at the Queue for the NEW Minnie’s Style Studio Character Greeting at Tokyo Disneyland

Next
PHOTOS: Scrims and Scaffolding Surround Future Lockers at Harry Potter and the Forbidden Journey in Universal’s Islands of Adventure