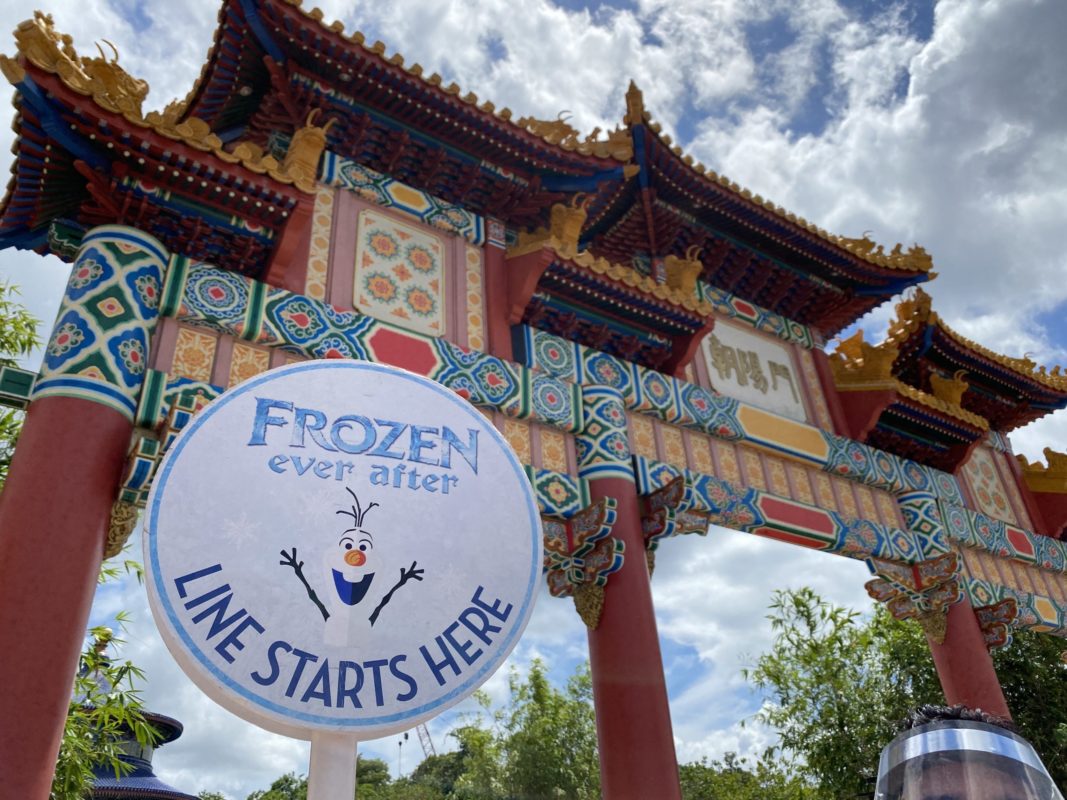 Greetings from a bright and sunny EPCOT! With the holiday weekend drawing to a close, we were interested to see what new things we would find, and what the crowd levels would be like today. We have news on both of those fronts, as well as some International Food & Wine Festival news. Let’s get started!

We arrived a little earlier than normal to the parking gate and we’re glad we did, because they had already let cars start lining up in preparation to enter the parking lot. On busier days, line-up starts one hour prior to park opening time, but today, the line-up started even earlier than that by at least 5 minutes. With the parking lot Cast Members sticklers for time down to the minute, we were surprised to see this early line-up.

Once parked, we saw that both sides of the tram loading zone were open for guests to enter the park and go through a temperature check point. While the right hand side has historically been the only side open and has a large tent at the end of the walkway in which several Advent Health personnel are available to check your temperature, on the left side of the walkway today there was only one Advent Health associate.

Eager to find any new merchandise that may have come out today, we headed straight for Mouse Gear to see what was new. We spotted this new adult t-shirt right away, featuring a Mickey head silhouette made out of common Disney phrases. This shirt retails for $24.99.

Next, we found this rather basic yellow adult t-shirt for those wanting more toned-down Disney apparel.

An embroidered Mickey Mouse on the breast and an “Original Mickey” tag on the sleeve are the only adornments on this shirt. It retails for $29.99.

We were on a roll with shirts, because next we found this adult 2020 Mickey pumpkin shirt, perfect to celebrate the season in this year. It retails for $24.99.

We also found the same design in a youth size, so your “mini me” can match you! These make perfect shirts for the whole family, even for people who don’t like matching shirts. Who can say no to a Mickey pumpkin? The youth size retails for $17.99.

Next, we found this women’s tank with “Walt Disney World” in lettering that matches this year’s Halloween Spirit Jersey. It’s made of a thin, distressed jersey material, and has a high-low hem with a several inch vertical split up the middle back. This tank retails for $34.99.

This little guy caught our eye next, how could we look away?

He’s a pen, with the barrel of the pen festooned with little drops of rubber.

We also found a Darth Vader pen in the same style. The both retail for $9.99 each.

We found the popular Halloween snacks Loungefly mini backpack fully restocked at Mouse Gear, which was nice to see.

We also found this very sparkly Minnie Mouse mini drawstring backpack made by Disney in the kids section. It was quite the backpack, with it’s ears and bow on top, and rhinestones all over. It retails for $44.99.

While we don’t feel it was as crowded today as it was over the weekend, it was still more crowded today than it has been since the parks reopened. This was the line for Spaceship Earth, which claimed to have a 5-minute wait at this time.

In the Land Pavilion, Cast Members put up a barricade to help funnel traffic headed for Soarin’ Around The World into the queue, with one problem- those wishing to the exit the Pavilion had no way to do so. This whole Pavilion is one-way, meaning all traffic must come this way, and may not be headed for Soarin’. Social distancing was practically impossible here, and we had to squeeze through parties scanning in for their Disability Access in order to leave this area.

Cast Members were spotted today walking through the crowds today carrying the now-familiar sign reminding guests to keep their face masks on unless eating or drinking while stationary. Normally these Cast Members can be seen around the Character Cavalcades, but today they were also out on their own to help remind guests about the new rules.

Even though it wasn’t a weekend, the festival booths which are normally only open on weekends were open today. We noticed some menu changes to a couple of booths, starting at the Islands of the Caribbean. The Red Stripe Lager has been replaced by Playalinda Brewing Company Tropical Wonderland Wheat Ale. This is a new beverage to the EPCOT Festivals.

The Mexico Pavilion had a steady line to enter all day, and the line reached capacity at least once while we were there. We circled back and tried to enter the Pavilion later in the day and got in.

We noticed that while larger parties need to take up more than one marker out of necessity, smaller parties were not paying attention to their spacing, and many people were standing in line in the spaces in between markers rather than on them when they had plenty of room to be able to stay on their marker. In short, the social distancing markers were not being paid attention to, and the almost 20-minute wait to enter the Pavilion would have been more pleasant had guests paid more attention to their spacing.

Inside, we found La Tienda Encantada open to guests.

Inside we found the shelves bursting with color as all the brightly painted figurines smiled up at us.

At the Norway Pavilion, the siren song of School Bread had the line for the refreshments cart abnormally long today.

Another abnormally long line was the queue for Frozen Ever After, which with a 75 minute wait stretched all the way into the China Pavilion.

The Alps and Spain booths, both designated to be open on an “as needed” basis, were both open today.

We noticed another menu change at The Alps booth. The Maison Will Reserve Gewurztraminer was replaced by the Cave De La Cote Rose Gamay. Please note that the change is only made on this large sign, the smaller signs at the register still show the Gewurztraminer and are incorrect.

We found another impressive line at the Beauty and the Beast Sing-Along. With 6 minutes until the next show, the line stretched the length of the square here, almost out into the street next to the festival food booth.

In the World ShowPlace Events Pavilion, where we expected the crowds to be the worst, we found them to be not nearly as bad as we expected. The lines for the food booths were not very long, even around midday, and while we’re sure the crowd ebbed and flowed here, we were impressed with the crowd management.

Canada was our last menu change for the day. The Collective Arts Brewing Company Blackberry Fruit Beer was replaced by the 81Bay Brewing Co. Apricot with Maple Syrup. This is a new beverage to the EPCOT Festivals.