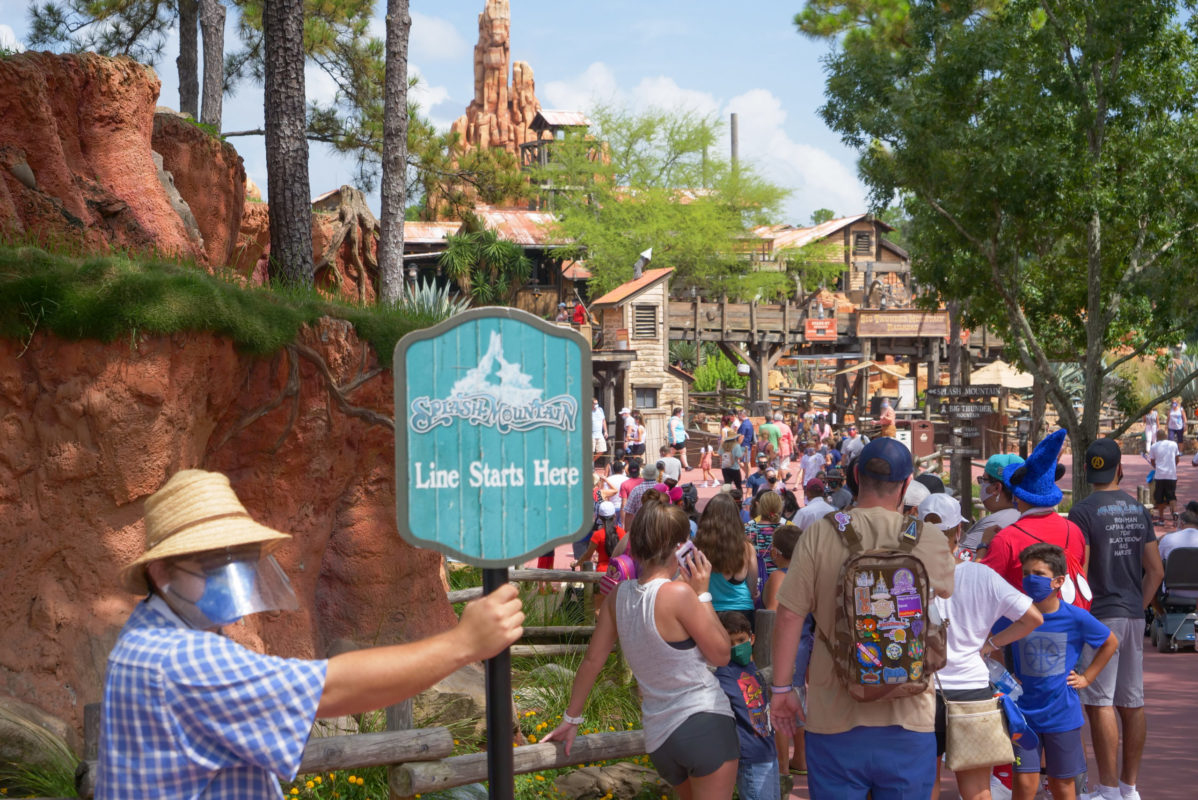 Welcome to the Magic Kingdom, where we’re smack-dab in the middle of the long Labor Day weekend! It’s a busy day at the park, both with regard to guests and all of the updates from within the parks, such as Halloween and fall food, new merchandise, and more. Let’s see what’s new inside!

Before we get into the park itself, we noticed a sign which matches what we discovered yesterday at one of the resort hotels, advising guests that Park Pass reservations are no longer available for today.

As we first enter the park, we’ll take a look at one of the few construction projects in the park — the refurbishment of City Hall. Unfortunately, it seems like this project has either been delayed or significantly reduced in its priority, as this relatively small building has yet to be uncovered from the exterior work.

Moving on to merchandise, the Baby Yoda ear headband which debuted yesterday is, pleasantly, still in stock at The Emporium. There were a lot of understandable fears that these would be a limited supply and quickly scooped off the shelves, but there seems to be plenty to go around.

Our first new find for today is this unique Mickey Mouse misting fan. While we first thought it might be a popcorn bucket (which isn’t a bad thing), it turned out to be a pretty unique item for keeping cool during the hot summer.

This Minnie Mouse print hat popped into The Emporium, joining other denim and denim-look items such as overalls and a Loungefly backpack. The hat sells for $27.99.

At Plaza del Sol Caribe Bazaar, some new art items have joined the lineup of Jungle Cruise merchandise. This small framed painting is available for $24.99.

A larger version of the framed art is available as a print. There’s also a second variation available in a different style. Both sell for $39.99. If that’s a bit more than you’d like to spend on Jungle Cruise art, postcard versions of both styles are available for $5.99 each.

Moving onto one of our biggest topics for the day — food — we stumbled upon a fall version of the Mickey Mouse cinnamon roll at the Main Street Bakery, better known as Starbucks.

Casey’s Corner is also getting into the ice cream game, though in a very much unofficial capacity as its storefront is merely used as a home for the carts.

Constance’s For Better of For Worse Wedding Cake made a quiet return to the Magic Kingdom, offering up a tragic treat to all who dare.

Our big find for the day was at Sunshine Tree Terrace, with a new Halloween treat debuting for this year…

The Headless Horseman Rides Again Dole Whip Float made its grand appearance today, after Sunshine Tree Terrace was unexpectedly closed yesterday. Check out all of the details on this new spooky item in its dedicated post.

Staying on the topic of food items, but transitioning to the lines and crowds present in the park today, Sleepy Hollow had a massive line of guests attempting to get their hands on the new Madame Leota light-up sipper.

The newly-reopened Gaston’s Tavern had an incredibly long line shortly after opening this morning, too. Thankfully, the line got smaller throughout the day.

While we’re in Fantasyland, we took a quick detour over to Storybook Circus to check out the removal of the Walt Disney World Railroad track around the station. What was a railroad track only days ago is now mere rocks.

Just next door to Storybook Circus, Seven Dwarfs Mine Train had a 55 minute wait, and a line to match, stretching nearly to the entrance for Journey of The Little Mermaid.

Oddly, of all the long lines in the park, one attraction notorious for long waits — Peter Pan’s Flight — was only 35 minutes midday. The fact that the ride has nearly normal capacity helps keep wait times reasonable.

What would normally be unthinkable, “it’s a small world” having a longer wait time than Peter Pan’s Flight, has become an understandable change given the impact physical distancing has caused to certain ride capacities.

Splash Mountain has been popular for a number of reasons: its retheming at some point in the future, the summer heat in Florida, and simply being an enjoyable attraction. As such, it has consistently earned one of the highest wait times since the park reopened.

In the post-lunch rush, Space Mountain had a massive line of its own, traversing quite a bit of Tomorrowland. The trek to the attraction was advertised as 40 minutes, which seemed like an underestimation.

Throughout the day we caught numerous characters and entertainment, mostly in the form of cavalcades. We’d end up running into Goofy more than once today.

Tinkerbell, all alone on her float, is always fun to catch passing by.

Captain Jack Sparrow could be found intermittently near Pirates of the Caribbean in Adventureland.

The Main Street Philharmonic puts on a good mobile show, finishing up their set on Main Street.

Later on, we finished up our day seeing Goofy and his friends once again. As you can see, the weather was starting to break down a little, so it was time to wrap up.

We left Cinderella Castle as the dark clouds moved in, and bid farewell to the Magic Kingdom on what was perhaps the busiest day since the park reopened in July.

As always, we appreciate you joining us as we tour Disney parks all around the world on a daily basis. To stay up to date with the latest happenings in the parks, be sure to click here and follow @WDWNT on Twitter.