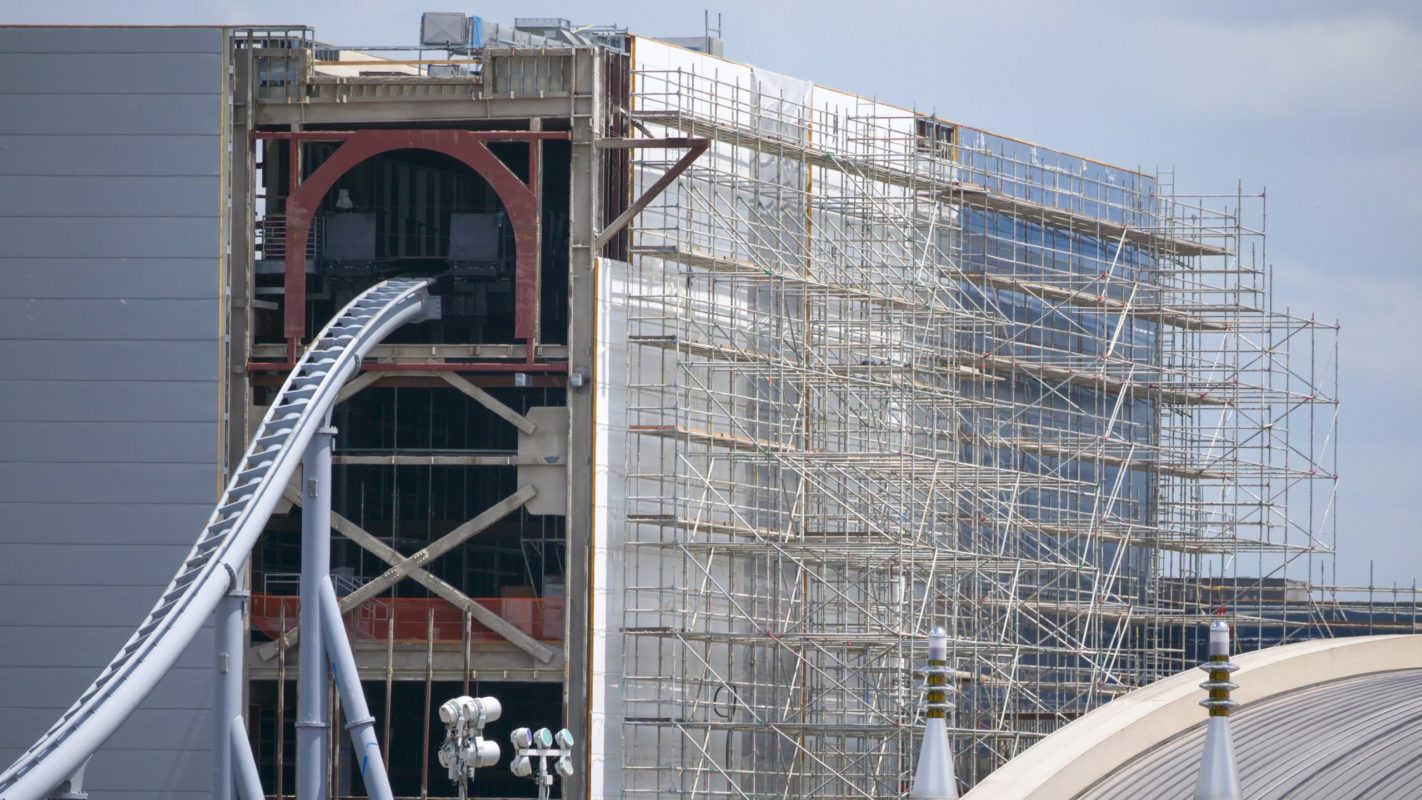 In just under four short holiday-filled months, we will be introduced to 2021, and with the introduction of the new year comes an expectation for one major attraction at the Magic Kingdom: TRON Lightcycle / Run. While COVID-19 has certainly caused some delays, work has continued at a brisk pace to get this attraction done before Walt Disney World’s 50th anniversary. Let’s take a look at some of that recent progress, and where the project stands now.

From outside the park, we can see that the vast majority of paneling has been added to the side of the building which faces South (towards the Contemporary Resort, amongst other things). Until recently, two of the four sides of the show building have been exposed to the elements.

On the side of the building most visible to guests from inside the park, when has been closed up since before the park closure, we can see the scaffolding which rises up the entire height of the structure, and has allowed workers to install the many panels which comprise the entire wall.

Besides the show building paneling, work on the canopy structure has been some of the most visible. While the larger framing pictured has been vertical for several months, the white canopy supports are a very recent addition.

Those white supports might look like a second set of tracks, but they are indeed to support the massive canopy structure which will provide both protection and heavy accenting to the attraction. If you aren’t familiar with the intricate and futuristic canopy design, check out our post with the concept art.

With nearly all of the paneling installed, the portions of the building where the track enters and exits the structure is one of the few glimpses we still have inside. The upper opening is, unlike most roller coasters, where ride vehicles will return to the “gravity” building.

Taking a look from a different angle, we get an up-close look at framing that is being assembled as part of the aforementioned canopy structure. This complex design supports a unique canopy that includes many lighting effects in addition to protection from the elements.

Here we see a section of track which curves around several supports for the canopy, which will eventually see portions of the honeycomb-like assembly topping them.

Finally, we’re able to get another view of the white canopy “tracking”. This is one of the most recent additions, and this section continues to grow towards the existing supports, slowly forming the framing of the illuminated canopy.