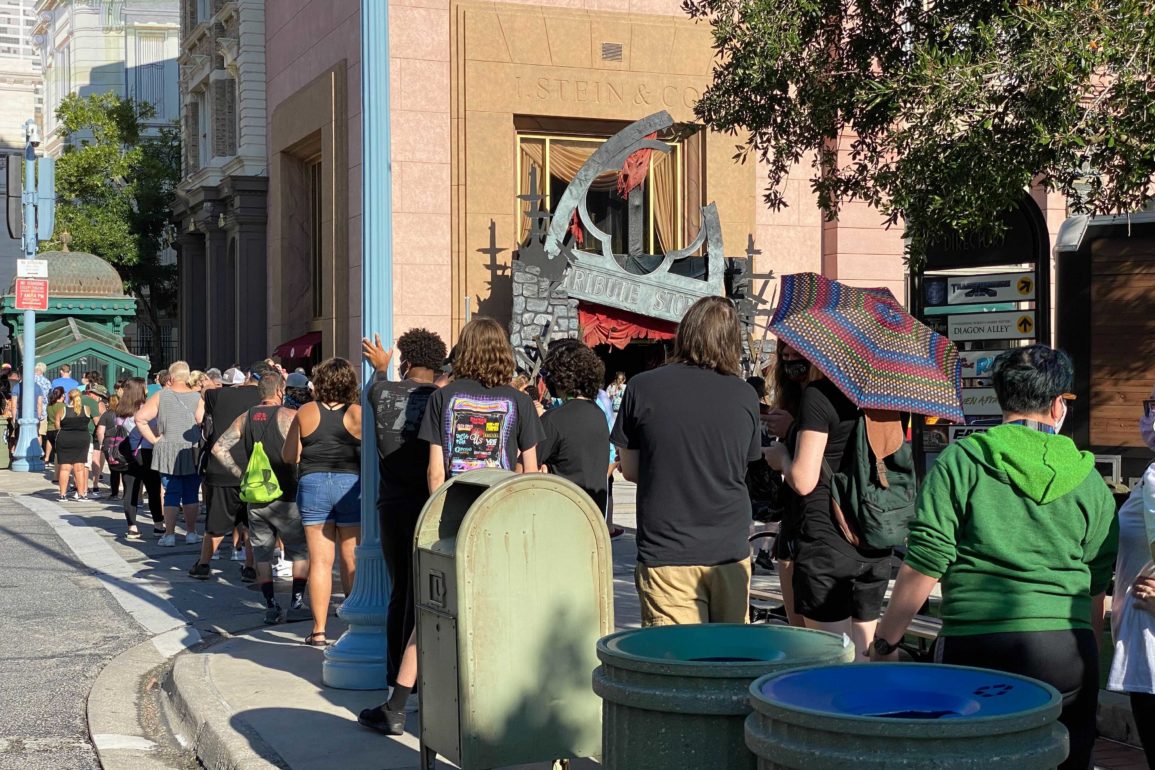 Good morning from Universal Orlando Resort! Our reporters were up bright and early to check out all of the new Halloween festivities opening at Universal today.

Team Members had prepared the walkways in Universal Orlando’s parking garages for bigger crowds than usual.

Islands of Adventure was open for early admission instead of Universal Studios Florida.

The line to get into Islands of Adventure (and take the train from Hogsmeade to Diagon Alley), was all the way out to CityWalk.

Thankfully, it didn’t take too long to enter.

We checked out a trick-or-treating station before heading to the train. Guests 12 and younger can trick-or-treat for candy throughout Islands of Adventure.

Lines continued inside the park as guests headed to Hogsmeade.

Meanwhile, Universal Studios Florida had a long line to enter the park at 9:00 AM.

Once inside, we headed for the haunted houses.

During Premier Passholder previews yesterday, we experienced the two new Halloween Horror Nights houses: Revenge of the Tooth Fairy and Universal Monsters: The Bride of Frankenstein Lives. For Passholder previews, the houses utilized a reservation system that opened on Wednesday.

This morning, Revenge of the Tooth Fairy allowed anyone to line up. Once the standby line was full, the virtual line opened via the Universal Orlando app.

Though we were ready to grab our spots, the virtual line filled up quickly and we didn’t snag times until the evening.

While guests swarmed the haunted houses, Hogsmeade and Diagon Alley were almost empty.

The lines for both houses and the Halloween Horror Nights Tribute Store ran down the street.

Since the virtual line filled up so fast, Team Members put out signs stating that the haunted houses had reached capacity.

Anyone who missed the chance to visit a haunted house will have to try again tomorrow or cross their fingers that Universal keeps the houses open after just this weekend.

Watch our livestream from Universal Studios below.

Have you been able to visit one of the Halloween Horror Nights houses this weekend? Let us know in the comments.

Next
PHOTOS: Construction Walls Now Up Around Liquid Layer Interactive Fountain at EPCOT