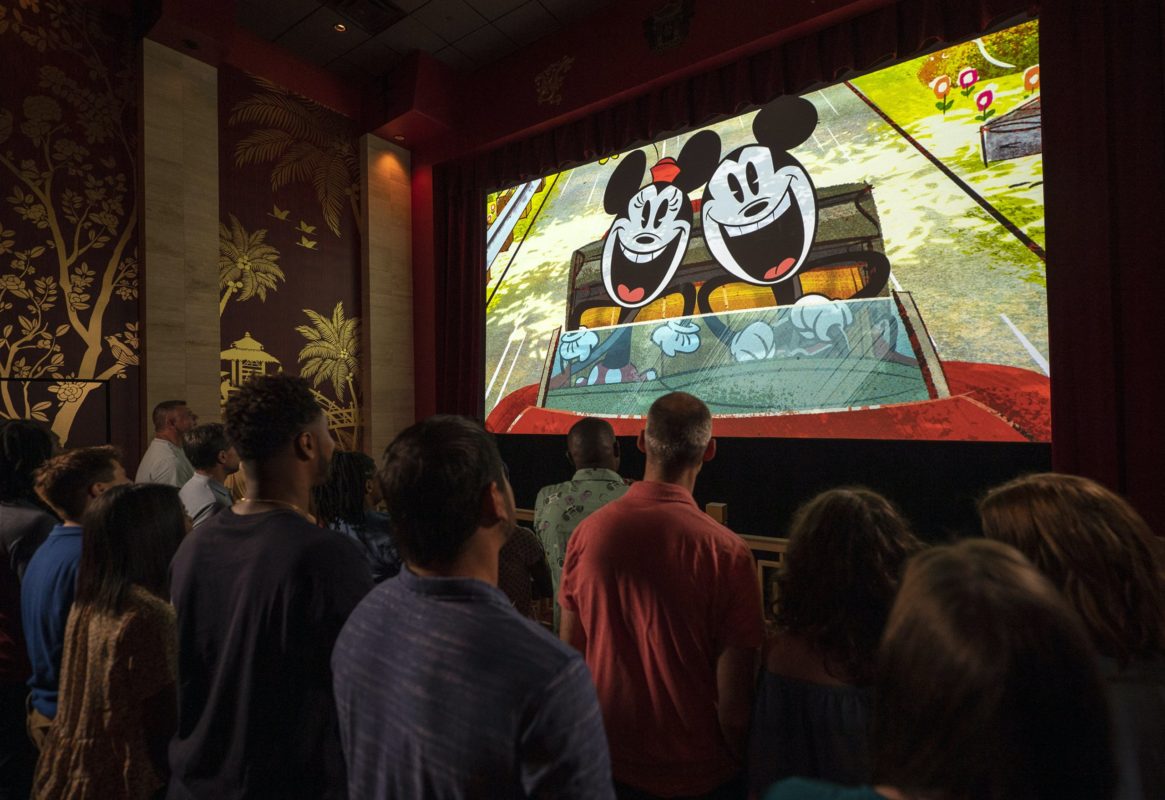 Nothing can stop us now…

The irony of Mickey & Minnie’s Runaway Railway at Disney’s Hollywood Studios is that the long-awaited attraction debuted just days before the unprecedented COVID-19 closure of Walt Disney World… and its theme song, “Nothing Can Stop Us Now”, was the very antithesis of the theme park shutdown. Now, the park and ride has reopened to the masses returning for a sense of normalcy and enjoyment, but modifications have all but rendered the pre-show null and void, due to physical distancing guidelines.

Originally, guests would be loaded into smaller theaters as part of the pre-show, where they’d watch Mickey and Minnie stuff Pluto in the car trunk and head out for a “Perfect Picnic” where absolutely nothing could go wrong. Following a bizarre set of events that ultimately lead to a pie blowing up a train, the explosion causes the screen itself to erupt in a billow of smoke, opening a portal for guests to enter into the cartoon world (and onto the loading platform.)

Now, people just walk on through without stopping, for physical distancing purposes, and up until now, guests were only clued in on that extra piece of storyline by way of Cast Members haphazardly yelling through their protective equipment. Sadly, it is really hard to hear a cast member explain any of this through a face mask and a plastic shield. As first seen during our WDWNT daily livestream from Disney’s Hollywood Studios yesterday, a new overhead announcement now plays, narrating what guests would see if the pre-show were still operating:

While guests are queueing up right before the theaters, a cheery voice chimes in overhead:

Welcome, everyone! Well… we have a little change of plans. In our last screening, as Mickey and Minnie drove off to the park to enjoy their perfect picnic, Engineer Goofy pulled up in his train, and let’s just say, he really had a blast. Now, instead of watching the cartoon, you get to step into it!

With Cast Members now made to wear face masks and face shields for safety, it seems they are trying to alleviate them from trying to expand on parts of the attraction’s story or fill in for missing elements. A pre-recorded message is the ideal way to communicate loudly and clearly to guests given the new constraints.

If you find yourself nostalgic for the bizarre pre-show cartoon, you can view it in full embedded in the video below (make sure you temporarily turn off your ad blocker.) Are you eager for the return of the Mickey & Minnie’s Runaway Railway pre-show? Let us know in the comments.

New Pirates of the Caribbean Skull Bank, Bottle Opener Magnet, Apparel, and More Arrives at Disneyla...September 5, 2022
New Jasmine Purse by Danielle Nicole at Disneyland ResortJuly 29, 2022
Florida Man Spits on 13-Year-Old Girl While In Line for Star Wars: Rise of the Resistance at Disney'...October 17, 2022

Guests Get to Vote for Next Legacy Lightsaber Coming to Dok-Ondar’s Den of Antiquities in Star Wars: Galaxy’s Edge, Products From the Theme Park Land Now Online at shopDisney, Coming to Disney Springs