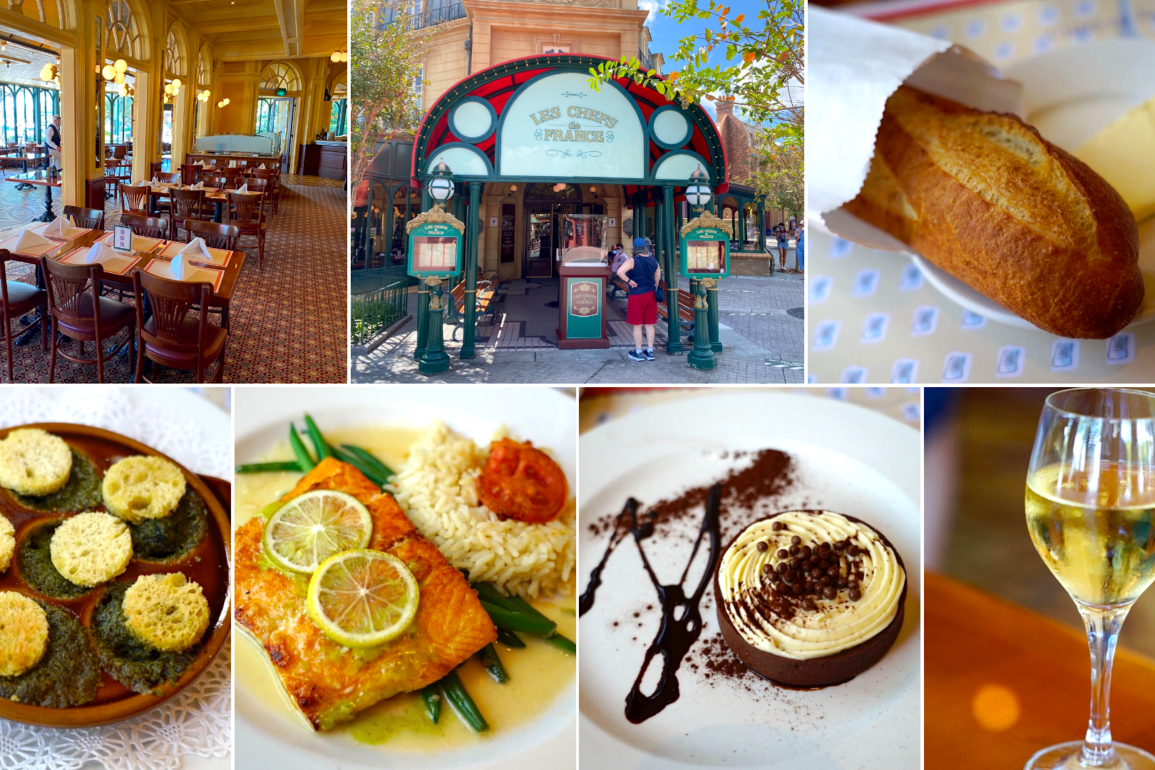 Ma chère Mademoiselle, it is with deepest pride and greatest pleasure that we welcome you tonight. As we learned last month, Chefs de France has finally reopened in the France Pavilion at EPCOT today. We sat down for lunch to enjoy the restaurant’s delicious French cuisine, and we’re taking you along for the meal!

Used as a makeshift seating area up until now, the Chefs de France entrance is now set up to welcome guests, with a menu on display and plexiglass mounted to the host stand.

The menu has been pared down some, but it still features many guest favorites, like French Onion Soup, Boeuf Bourguignon, and Creme Brulee. There is a prix fixe meal called Menu Francais available for $49.50. With this option, you get the choice of one appetizer, one entrée, one dessert, a glass of either Chardonnay or Cabernet Sauvignon, and a soda, ice tea, coffee, or tea.

For Chefs de France regulars, this may seem like an odd sight to behold, but the tables throughout the dining area—typically cramped together for the ultimate Parisian ambiance—have been spaced out for social distancing. As we’ve now transitioned to “Phase 3”, we noticed there were no tables marked unavailable. Instead, everyone has plenty of space in between (whereas before, you could probably turn around and steal a baguette from the adjacent table.)

Still, the rich theming of the restaurant, with its mosaic floors, tiled ceilings, and warm light fixtures, makes it just as charming as ever.

The quaint paper placemats are still in use, as well as cloth napkins. We were treated to a lovely sparkling wine as a sweet “Welcome Back” gesture to celebrate the restaurant’s reopening.

A QR code menu is available to scan in lieu of a physical menu. We, of course, opted for the famed Menu Francais to try some wine and a bit of the entire menu.

Having wine and a drink now included in the Menu Francais is a big selling point for Chefs de France, as you could have a full-on, all-inclusive meal for just under $50 (plus tax and tip, and yes please tip your waiters since this isn’t actually France and we’re still in a pandemic.) While this is your basic house wine, it’s still a great pairing for whatever you opt for along the menu.

Depending on what you’re having, you’ll want to opt for either the red or white wine. As you’ll see below, we paired the Chardonnay with the salmon dish and the Cabernet with the beef tenderloin.

Regardless of whether you opt for the Menu Francais or a few select items from the menu, everyone dining at Chefs de France gets a piping hot mini baguette in a tiny parchment bag. It’s a great touch, and comes with a delicious pat of butter.

These are the same baguettes sold at Les Halles next door, and make for the perfect starter to any meal, whether you’re having just a soup or a full meal.

Casserole of Burgundian escargots baked in parsley and garlic butter

When in France, you must dine on the specialties! If you aren’t afraid of being more adventurous for your appetizer, the escargot here are excellent. All six delicious morsels come in a ceramic dish, piping hot from the oven. The escargot are buttery, soft, and sizeable, and at $13.99, one of the better values on the Menu Francais.

Assortment of imported cheeses and charcuteries, house made bread

Whether you’re in the mood for a whole wedge of brie or are willing to share with your tablemate, the charcuterie board is excellent, served with fresh meats, tiny cornichon pickles, walnuts, dark bread, and of course, fromage.

Considering this is the highest-priced appetizer from the menu, this is likely your best value, too.

Next, we move on to entrees, which are not as trendy or craveable as some of the signature appetizers, but still expertly cooked. Here, we opted for lighter fare—the salmon, which is served seared on a bed of green beans, rice, and buttery champagne sauce.

The salmon didn’t really blow us away here. It tasted fine and was well-cooked, but tasted slightly under-seasoned.

The rice, while humble, was surprisingly buttery and delicious, with green beans that were cooked to perfect tenderness.

At $37, this is one of the best values on the Menu Francais—you get a sizeable tenderloin steak with plenty of mashed potatoes, green beans, and a puddle of delicious peppercorn sauce.

As expected, the steak was tender and delicious when dipped in sauce.

The mashed potatoes were sturdy and clearly made in-house, unlike most of the watery or gritty mashed potatoes we’re used to eating around Walt Disney World. As with in the salmon dish, the green beans were cooked to perfection.

Between Les Halles Patisserie and L’Artisan des Glaces, there’s no doubt that the France Pavilion does desserts well, and with the delicious options on the menu, it’s hard to pick one. If you want to go for something classic, however, you have to go for the Creme Brûlée.

The Creme Brûlée was excellent, with a layer of expertly torched sugar on top to crackle with the back of your spoon.

The browned pieces of sugar really added to each bite of the rich, sweetened cream below.

This being the France Pavilion, no chocolate creation would be complete without the inclusion of rich, luxurious Valrhona chocolate. A chocolate-lover’s dream, this tart features chocolate syrup, cacao powder, and even chocolate crispy pearls in a beautiful presentation.

For this review, we have to defer to Tom’s thoughts on the dessert—he isn’t easily impressed, and he thought the tart was exquisite.

The richness of the tart was cut by the layer of sweetened cream, with a delicious chocolate crust for some added texture.

For a very European touch, our waiter offered us some espresso to end the meal, also apparently included in the Menu Francais. While the menu lists Café at $3.99 and Café Espresso at $4.25, it seems any coffee variety is permitted under the new prix fixe menu.

It’s a perfect palette cleanser to close out the meal with, while also giving you the boost of energy you’re going to need to finish your tour of World Showcase or EPCOT after eating a three-course meal.

We’ve been eagerly awaiting the reopening of Chefs de France at EPCOT, and could not be happier to have table service dining back at the France Pavilion, especially considering how many restaurants are still closed throughout the World Showcase. Surprisingly, most of the staff was French, giving the reopening a flair of authenticity, and the service was incredible. We were thoroughly attended to for the entirety of the meal, from the “Welcome Back” sparkling wine, to the final cup of espresso.

With the Menu Francais prix fixe back and better than ever, it presents a tremendous deal, including wine and beverages you’d normally have to pay extra for everywhere else. (Do note, however, that the restaurant does not currently take discounts.) That being said, this is a ton of food, so if you’re coming for the three-course prix fixe, we recommend coming for dinner to avoid having to take a midday nap. Still, the airy ambiance and watching guests walk by during the daytime is equally great.

We didn’t wax poetic about the entrees here because they weren’t the most memorable, but between the service, the atmosphere, the appetizers and desserts (and of course, the “free” wine), it’s definitely worth eating here if you’re looking for a multiple-course meal at EPCOT. The only place that might give Chefs de France a run for its money right now is Biergarten, with its modified table service dining and live band over in the Germany Pavilion, but in this case… we recommend you just visit both! (Ideally not on the same day, though.)