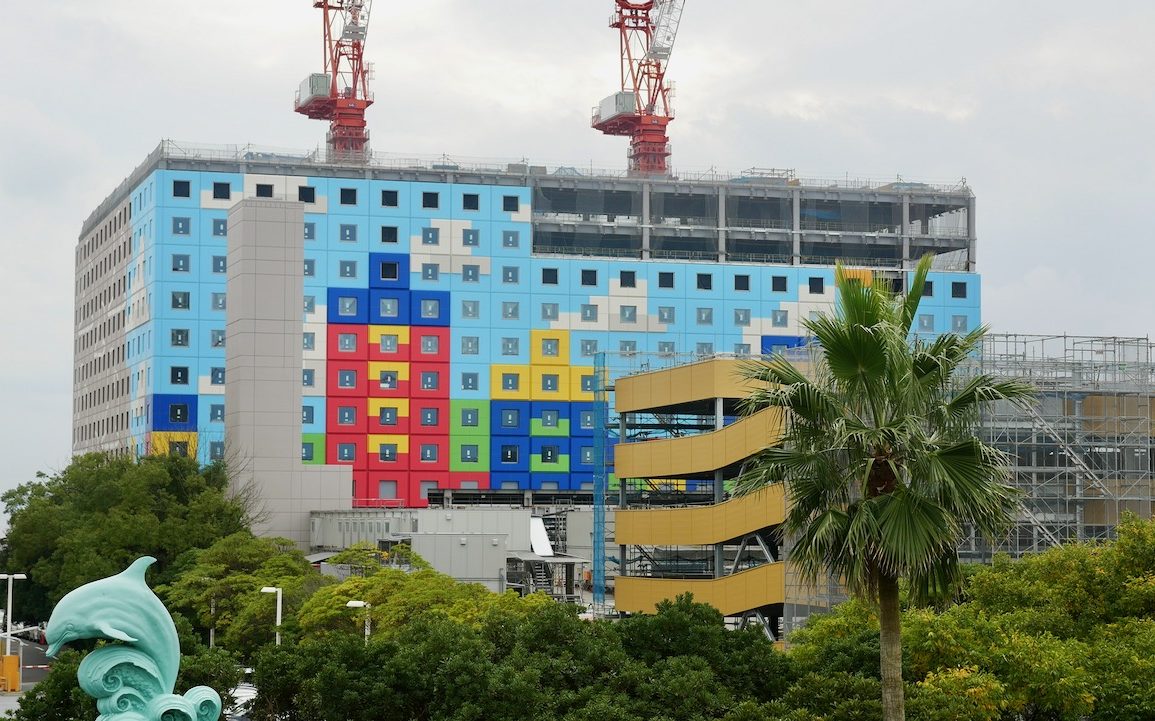 While we’re usually focused on the two theme parks at Tokyo Disney Resort, there’s some fairly major work happening behind the two parks in the Bayside area—a new Toy Story-themed hotel is under construction between the Hilton and Hotel Okura! Construction has progressed rather significantly since our last update, so let’s not dilly-dally any longer and go to Bayside and beyond!

No matter your opinion about this hotel, the facade itself is rather… obvious. It’s fairly easy to spot the colorful exterior amongst the sea of beige hotels nearby. From the JR Keiyo Line and Maihama Station in particular, you won’t be able to miss the sight of it. The facade may be leaning in to the Toy Story theme a bit too much, with a look of being built from toddler’s alphabet blocks.

There’s now a large pile of dirt outside the construction fence. It’s not entirely clear what else new has been excavated.

Progress on the painting of the parking garage obtrusively placed in front of the hotel is also nearing completion.

All 11 stories are now in place on the building, and the north and east facades are almost completely covered.

It seems like the east and west sides won’t be covered in colors, rather sticking with the brown color with clouds that look painted on with white chalk.

On the south side, the facade work isn’t as complete as on the north side, but it’s definitely getting there. Floors 9, 10, and 11 are missing most of their facades on the south side.

Something important to note is that the first two floors are still missing any coverings on the central section. Concrete is in place on part of the wings. Maybe more is still planned for this area?

The outer wings and the hotel’s west side both feature the plain brown walls with spray-painted clouds. We still aren’t sure what this hotel will look like, since no concept art has been released, but it’s still projected to open in 2021, so we’ll keep our eyes on Bayside until then!

Scaffolds and coverings are up on the hotel-facing side of Bayside Station on the Disney Resort Line.

There’s also a small fenced-off area outside fare control presumably in use as a staging area and storage during operating hours.

Walls are up on the first and second floors, including where a seasonal mural would normally be for Guests to see on their way through the station. There’s a small path open for the elevator.

On the outside, most of the hotel-facing side outside of the central area with the Bayside Station sign are covered by scaffolding. It’s unknown when this project will be complete.

Be sure to stay tuned to WDWNT for the latest progress on the unnamed Toy Story-themed hotel opening in 2021 at Tokyo Disney Resort!