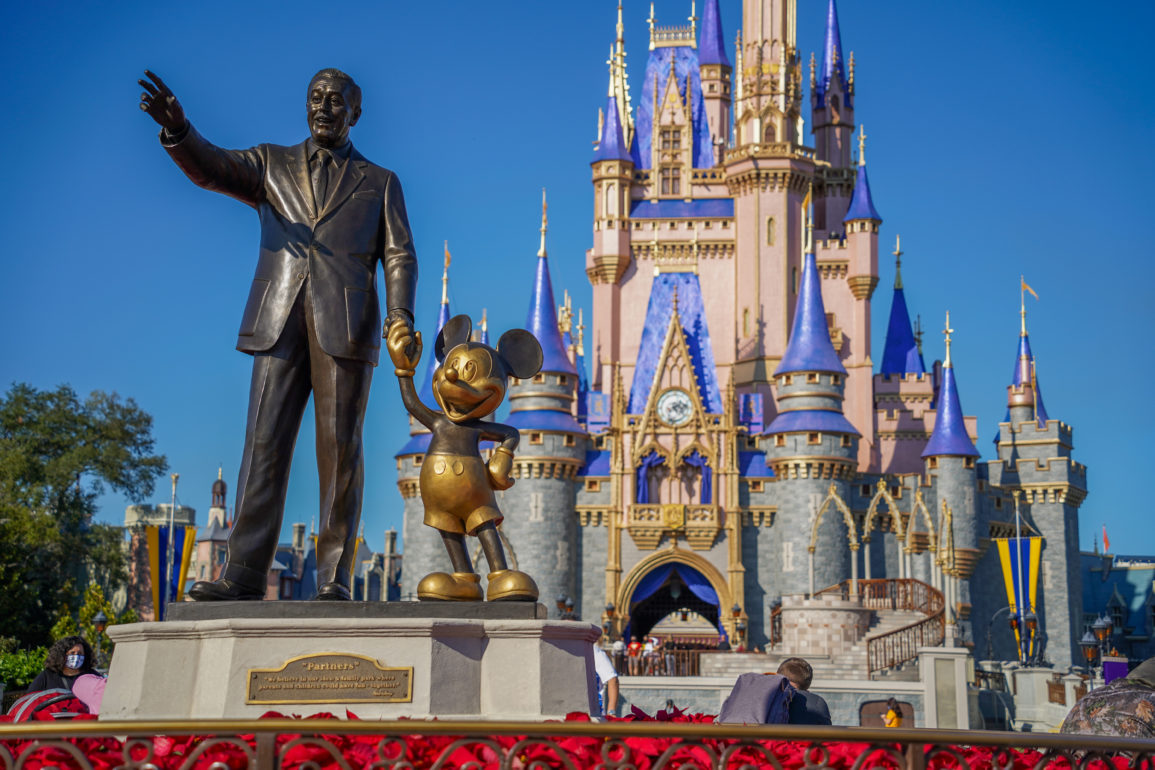 Happy birthday, Walt! There’s no better place to be on Walt Disney’s birthday than the Magic Kingdom, so naturally that’s where we are today. While there are no festivities per se, there are plenty of updates from the park—a new MagicBand, construction updates, and holiday entertainment, to name a few. Let’s head in and see what’s in store.

One of Walt’s most well-known passions was trains, and the Walt Disney World Railroad is one of the lasting legacies of that passion. Unfortunately, the railroad itself has been under refurbishment for quite some time, and the Main Street station has begun its own work as of yesterday.

Sticking to the railroad topic, the Fantasyland station, which had its portion of the track removed back in September, is now seeing the first sections of new track installed as part of this over two-year project.

Another train of sorts, the Tomorrowland Transit Authority PeopleMover remains closed, tallying up nearly nine months since it last carried guests. Unrelated to its closure, the refurbishment of the supports around the track is finally in the latter stages, with most of the supports either completely refurbished or fast approaching that finished state.

Sadly, but perhaps fittingly, one lone PeopleMover car sits on the track near the Tomorrowland Speedway, reminding us that it’s been quite a while since our last leisurely ride around Tomorrowland.

Rounding out the plethora of work in Tomorrowland, TRON Lightcycle Run was quiet today as crews enjoy the weekend off, however significant progress has been made throughout the week on the illuminated canopy which will be the face of the attraction.

Back at the front of the park, the exterior refurbishment of City Hall was completed back in September — or so we thought. Now, the pairs of doors are being replaced set-by-set, extending this project just a bit longer.

In Adventureland, the queue for Jungle Cruise has routinely extended past the Swiss Family Robinson Treehouse, and Disney has attempted to have the line impact the entry and exit for the walk-through attraction a bit less—with limited success.

Further into the land, the sign for Pirates of the Caribbean, which we reported on as being refurbished two weeks ago, seems to have made precious little progress since that time. A plain black sail is still the extent of the signage, with lettering and graphics still notably absent.

Big Al was out to welcome us into Frontierland on the balcony of Country Bear Jamboree.

While in Frontierland, we located a colorful new 2021 MagicBand. Naturally, the band includes Mickey Mouse, amongst other park iconography.

Track replacement work for the Liberty Square Riverboat continues, and naturally the Rivers of America remain drained during this time.

Despite that refurbishment, Santa would make his way through Liberty Square as his sleigh most certainly does not operate on a track.

Later in the day, Merida and Belle (amongst other princesses) would appear in the Royal Holiday Cavalcade along that same pathway.

Moving into Fantasyland, the crowds that would be waiting for us would be… sizable. The line for “it’s a small world” utilized backstage space, as it stretched nearly to Liberty Square.

Peter Pan’s Flight had an equally-long queue, looping back on itself multiple times until it ended near King Arthur’s Carousel. Notably, no same-day Park Passes were available today, indicating all Walt Disney World parks had reached their true capacities.

With these increased and maximized capacities has come the return of many elements of the parks—additional shops, restaurants, and even limited fireworks. One piece of entertainment that seems to have quietly disappeared, however, are the Evil Stepsisters from Princess Fairytale Hall (formerly of the backside of Cinderella Castle). The sisters, Anastasia and Drizella, put on one of the few interactive pieces of entertainment in the park, and the loss of this distanced meet and greet is disappointing.

That additional entertainment sure would have been nice as wait times and lines for even the less popular attractions in Fantasyland and Storybook Circus became a bit excessive.

Thankfully, Buzz Lightyear is still making his Christmas-themed appearances in Tomorrowland to distract guests from, or while in, these extensive lines.

Tomorrowland Terrace will soon be returning to provide guests with an additional dining option, however there isn’t much to see in the way of preparations for this reopening.

Back on Main Street, we caught Mickey’s Holiday Cavalcade rolling down towards the train station we started our day at.

Finally, we took a few moments to appreciate the Partners Statue, something that feels quite appropriate every December 5th in celebration of Walt Disney and his many creations.

Thank you for joining us at the Magic Kingdom today. Did you attempt to book a Park Pass today, or having trouble booking them for other days during the holidays? Let us know your experiences in the comments!