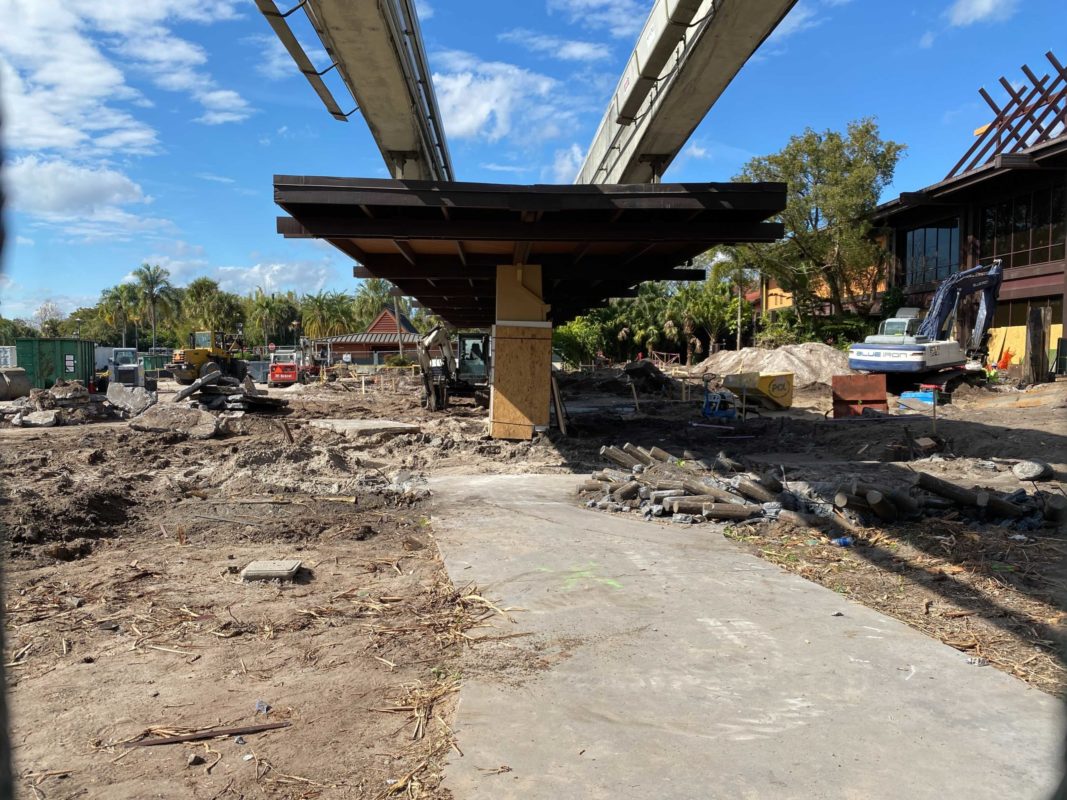 After the roof of the Monorail station and the platform were completely removed, the stairs and some supports have also been dismantled at Disney’s Polynesian Village Resort.

The bridge connecting the Monorail station and the Great Ceremonial House is gone, leaving doors to nowhere.

Of course, the doors are blocked off, as well as several of the windows.

The new crossbeam structure on the Great Ceremonial House is much more visible with the Monorail station dismantled.

Yesterday, there were still two stairwells to one side of the station, but they are now gone.

The Monorail has not stopped at Disney’s Polynesian Village Resort for several months now, but guests can still ride the resort Monorail through the station.

With the old Monorail station almost completely torn down, a new station will soon take its place.

Without the stairs and extra supports, the construction site is now much more exposed.

A platform beneath the Monorail track is all that remains of the old structure.

Concrete has been torn up throughout the area, leaving piles of dirt.

Now looking up at the Monorail track means getting a beautiful view of the sky.

Some of the concrete sidewalk remains.

Meanwhile, there was not much visible activity near the Moana room refurbishments.

PHOTOS, VIDEO: Rain-Modified Version of Mickey’s Most Merriest Celebration at Mickey's Very Merry Ch...November 10, 2022
FIRST LOOK Inside the 'Galaxarium' Queue of Guardians of the Galaxy: Cosmic Rewind at EPCOTMarch 30, 2022
REVIEW: Sour Cherry Pretzel Puts a Fun Twist on a Classic Treat at DisneylandJanuary 31, 2022