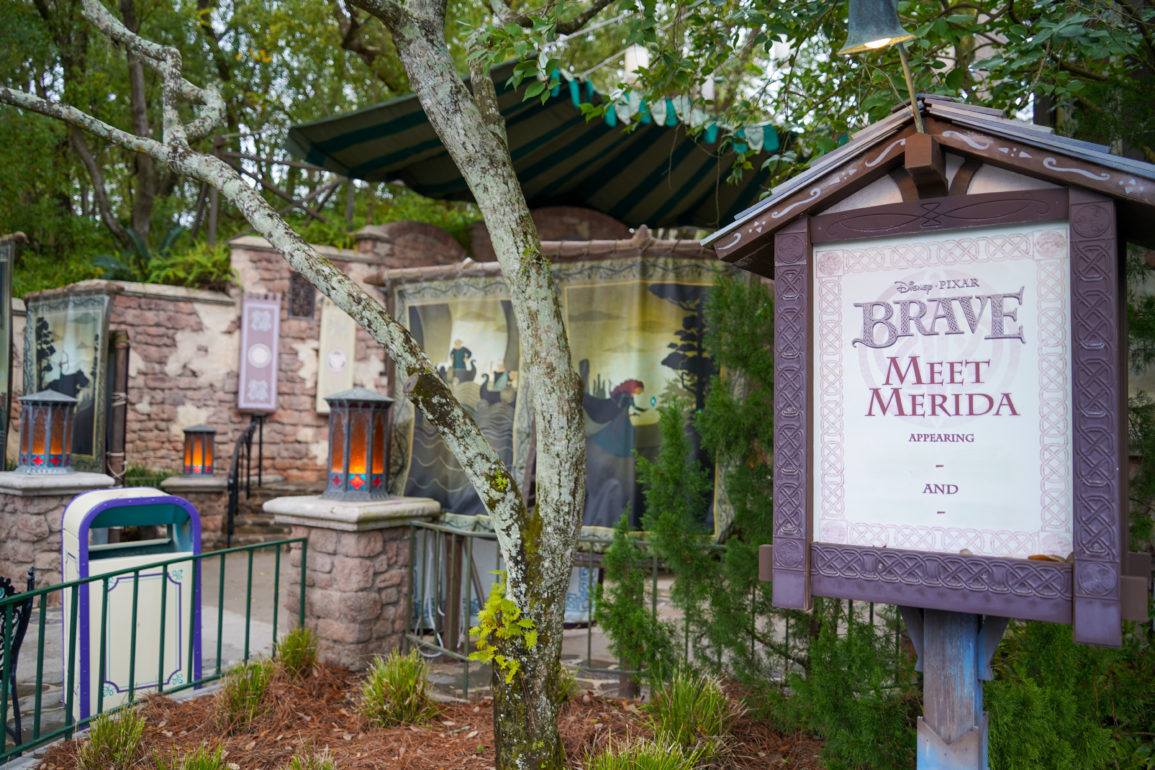 Welcome to, as the Osceola Parkway entrance now states, “The Most Magical Place On Earth!” Despite this magic, we have some very real weather to contend with as thunderstorms collide with Walt Disney World for most of the morning. We’re also contending with holiday weekend crowds here at the Magic Kingdom as Presidents Day approaches.

We arrived at the front gates this morning via bus — because the Express Line wasn’t operating. We quickly found out the culprit was Monorail Lime, which was being towed offstage.

Once inside the park, we popped into the firehouse which reopened late yesterday after a fairly short closure to strip the building of references to Sorcerers of the Magic Kingdom.

On Main Street, the gloominess was present, but the worst of the weather was still to come.

Back in Fantasyland, we checked on the exterior refurbishment of Peter Pan’s Flight. It didn’t appear that any additional walls or scrim were added since yesterday, which is fairly normal for a weekend.

One odd development this morning was that Merida’s meet and greet area was open. We weren’t sure if this was intentional simply for extra space for guests, but would later find out the answer.

Over in Tomorrowland, work on TRON Lightcycle / Run seems to have slowed as of late, even though crews are frequently working. As it turns out, some of the progress has been in dismantling part of the project, instead of the usual additive construction.

The refurbishment of Bonjour! Village Gifts seems to be nearing completion as most of the shop has been freed from rolling planters, but small detail work is continuing on this West end of the building.

It was at this point that the skies let loose for about an hour, dumping lots of rain on the Magic Kingdom and also bringing a plethora of lightning which shut down all of the outdoor attractions.

As you can see here, Splash Mountain, Pirates of the Caribbean, and Jungle Cruise were all shut down by late morning. Keen readers will realize that one of these things is not like the others, however.

Speaking of Jungle Cruise, a supply of Minnie Mouse: The Main Attraction Jungle Cruise Loungefly mini backpacks remains at Uptown Jewelers after they, and some of the fireworks variety, appeared yesterday.

Finally, the sun came out, and we were back on track for a proper holiday weekend at Walt Disney World.

We circled back to check on the Merida meet and greet area and it was now fully closed off, indicating that it being open earlier in the morning was probably a mistake.

At The Friar’s Nook, we discovered you can now have your hot dog or tots served in a Mickey ear hat. We first discovered this hat serving up a dessert at Disney Springs about a year ago.

In Tomorrowland, Buzz Lightyear finally made it to the stage after things had dried out a little.

Unfortunately, while the closures due to weather were over, Astro Orbiter was down for other reasons, making Rocket Tower Plaza a bit of a dreary place for a short time.

Back to Fantasyland, the queue for “it’s a small world” was once again utilizing backstage areas.

Peter Pan’s Flight, which is still using Columbia Harbor House for it’s queue, eventually had too long of a line and guests were turned away when they tried to enter it.

Beginning to round out our day, we caught the Mickey and Friends Cavalcade as it entered Frontierland.

Pirates of the Caribbean, the attraction that didn’t fit with Splash Mountain and Jungle Cruise as it’s indoors, remained closed after noon today. It’s closure was due to technical issues, but it eventually opened before 1:00pm.

As we exited the park, Valentine’s Day balloons were being sold on Main Street, and Mickey and Minnie floated down the way towards Cinderella Castle.

We picked up at Disney’s Hollywood Studios not far from where we left off at Magic Kingdom — with Mickey and his pals. We feel pretty lucky having picked the same park to hop to as Mickey did for his afternoon appearances.

Roundup Rodeo BBQ, the Toy Story Land restaurant announced nearly two years ago, is showing few signs of life as the nondescript concrete building sits near the entrance to the land.

Over in Galaxy’s Edge, the Rise of the Resistance sign which has an option for a wait time was out today — though we question if the attraction will ever have a standby option during that signs usable lifespan. The larger, rolling sign was being used as a seating area today.

At Tatooine Traders, opening day Rise of the Resistance Passholder t-shirts were available for sale, well over a year after the attraction’s debut.

Finally, as we headed for Hollywood Boulevard to exit the park, the Disney Junior Stars Motorcade was making its way through the park to entertain guests with one of the most unforgettable songs — no matter how hard you may try to forget it.

Thanks for tagging along with us as we toured the Magic Kingdom and Disney’s Hollywood Studios on this busy, rainy day. What do you think of the crowds, lines, and wait times in Walt Disney World these days? Share your thoughts with us in the comments.