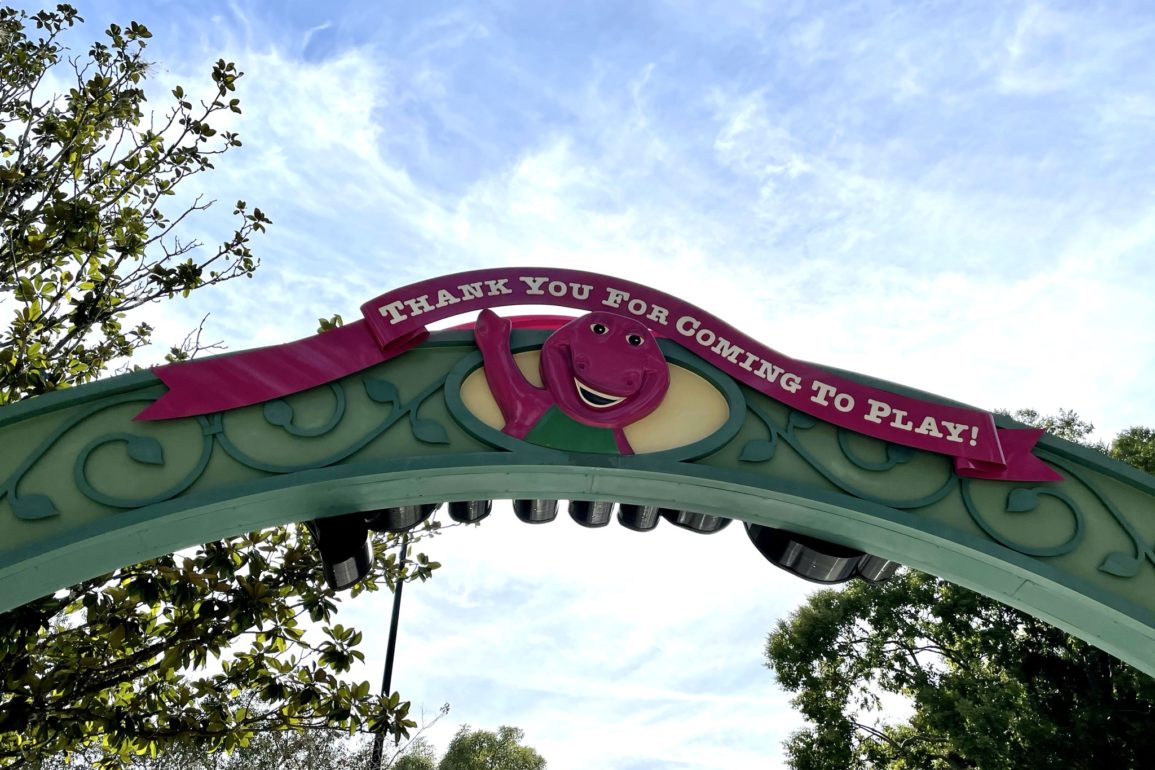 Welcome to another beautiful day here at the Universal Orlando Resort. We’re getting ready for the Mardi Gras season to begin on Saturday and the park is putting on the final touches. Let’s check out what’s happening at Universal Studios Florida first.

The giant sign at the entrance arch has us in the mood to party already. Be sure to stay tuned for all the Mardi Gras coverage this weekend!

Merchandise has started to arrive, including “Party Like A Pirate” and retro themed items. Check out our post for more merchandise pictures and prices!

Seeing all the decorations around the park is really exciting. We’ve even spotted social distancing markers where we expect there will be parade floats and entertainment offerings.

Some of the booths have gotten menus, and others have had their menus removed. We’re curious to see what changes are made to the locations that have had the menus taken down.

We stopped by to say farewell to A Day in the Park with Barney. After hearing rumors the show would not reopen, Universal Orlando has now confirmed the show is permanently closed. It’s a sad day for us.

The purple dinosaur may be gone, but there’s a Blue one we’re excited about over at Islands of Adventure. The coaster was not testing today, but there were lots of people working around the track in high reaches and baskets attached to cranes.

The last of the wrapped up raptors look like they could be losing their plastic soon. We spotted the crew working around the base, possibly on adding lighting of some sort. We’ll be keeping an eye on these clever girls.

Work continues on the entrance of the Amazing Adventures of Spider-Man. The pavement around the entrance was repaired a couple times last year, but it looks like they’re redoing it again. Hopefully we don’t see any more issues with it cracking when it’s completed.

Popeye and Bluto’s Bilge-Rat Barges is still closed for scheduled maintenance and we can see some scaffolding around the building.

The small section of construction walls remains up near Thunder Falls Terrace. We could hear work taking place on the other side, so we’re curious to see what gets done to this small area.

Time for a quick lunch at the Burger Digs. We enjoyed the BBQ Burger so much on our last visit, we decided it was time for another one. Hold the lettuce and tomato, add sauteed mushrooms, and we’re ready to eat!

The area behind the Three Broomsticks in Hogsmeade is getting some plants added to help camouflage the patio since it’s so close to the Jurassic World VelociCoaster track.

That’s all for this visit to the Universal Orlando Resort. Thanks for joining us around the parks today and make sure you stay tuned to Universal Parks News Today for more updates!