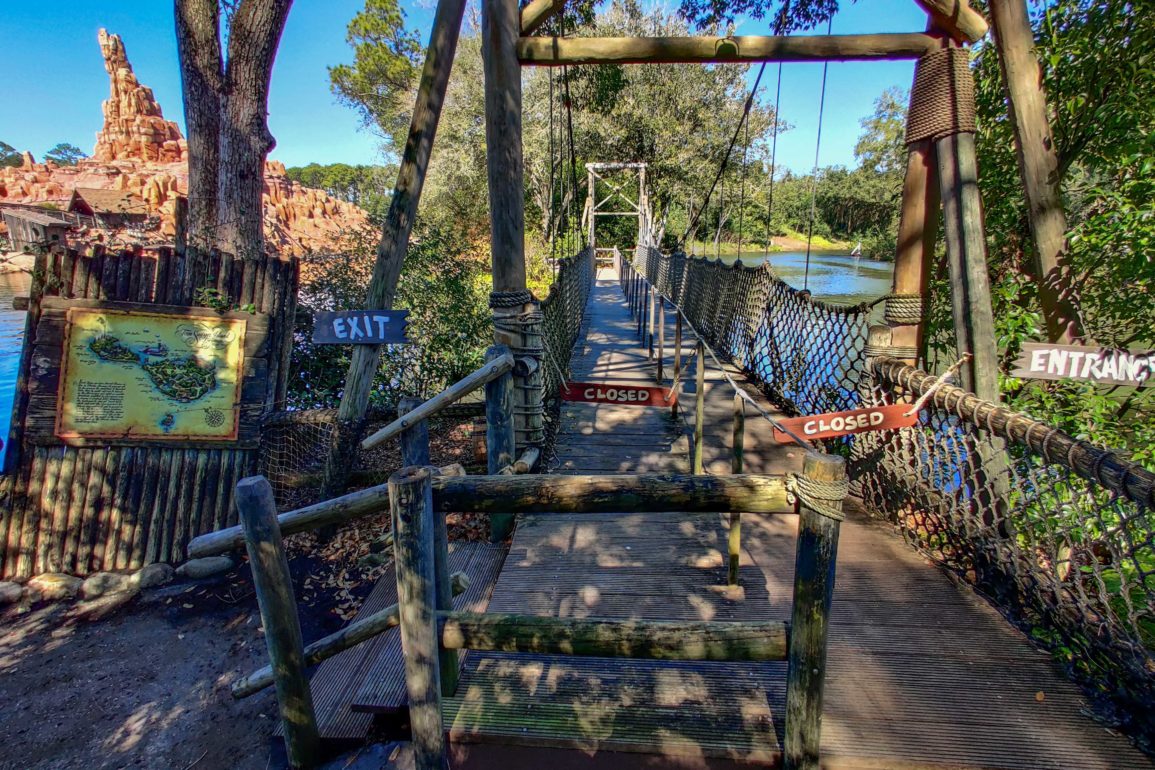 After closing for refurbishment in October, both the Liberty Square Riverboat and Tom Sawyer Island have reopened at Magic Kingdom today.

While Tom Sawyer Island did not open until 11:00 AM, we caught a few glimpses of Cast Members preparing the island and rafts while we were taking our cruise on the Liberty Belle.

While construction was obvious on the island’s Harper’s Mill, no other refurbishment was visible in the past few months.

We lined up before 11:00 AM to take a raft across Rivers of America.

We weren’t the only guests excited to return to the island.

There are social distancing markers for lining up on the dock.

Three parties are allowed on one raft.

We took the Becky Thatcher raft.

The rafts’ social distancing markers have not been replaced and are still in bad shape.

A couple minutes later, we were pulling up to Tom Sawyer Island.

Our first stop was the refurbished Harper’s Mill.

Nothing inside the mill was moving, though all the sound effects were on.

You’ll even hear the owl hooting.

Aunt Polly’s wasn’t open, but it usually only operates seasonally.

The barrel bridge was closed for refurbishment.

A green wall blocks the exit.

When we peeked beyond the wall, there were no barrels.

The entrance also had a green wall.

A new plank of wood had been installed on these stairs.

It looks like a tree was chopped down here and covered in fence netting.

The Scavenger’s Fort playground was closed, though we think that probably has more to do with COVID-19 precautions than refurbishments.

We did get to walk through the windmill.

The pole was moving inside the windmill.

We also visited some of the island’s caves.

Unfortunately, the bridge leading to the island’s large fort was closed.

A Cast Member told us the fort was still closed for refurbishment.

We did catch a glimpse of the fort while on the Liberty Square Riverboat. Refurbishment must be happening inside.

There is hand sanitizer throughout the island, especially near the raft docks.

Finally, we took the Huck Finn raft back to Frontierland. Thanks for joining us on this trip! Are you excited to return to Tom Sawyer Island? Let us know in the comments.

Next
REVIEW: Mardi Gras Doughnut is Cute and Delicious at Voodoo Doughnuts in Universal CityWalk