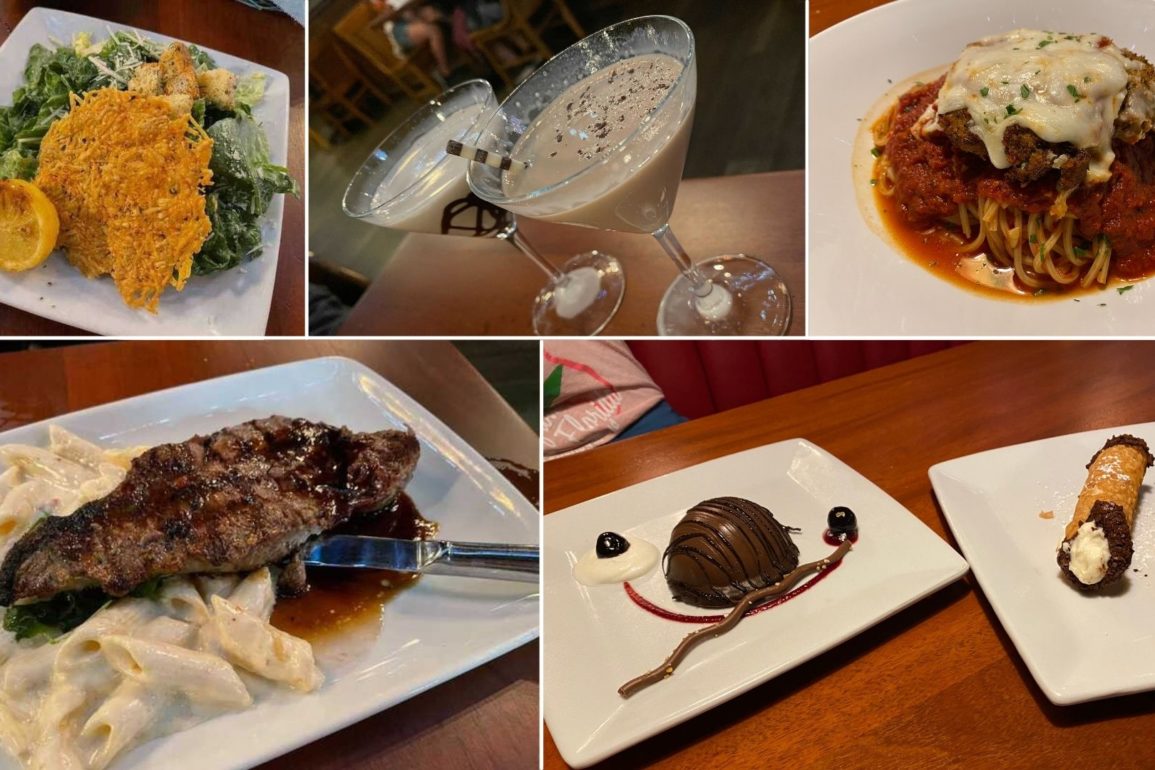 REVIEW: Desserts and Drinks Succeed Where All Other Food Fails at Mama Melrose’s Ristorante Italiano in Disney’s Hollywood Studios

Since last summer, we have sat down for dinner at Mama Melrose’s Ristorante Italiano on Grand Avenue at Disney’s Hollywood Studios twice, and now we’re ready to share our thoughts with you.

Disney describes this restaurant as a “casual but colorful Italian eatery with a California twist.” This can be seen in the many details throughout.

Check out those L.A. Rams license plates and the Rodeo Drive Sign. They also pay homage with a Dodgers/Yankees World Series pennant.

As you can see below, the restaurant is taking health and safety measures for cast member and guest protection, including limited seating, social distancing, and mask-wearing.

For safety purposes, the dinner menu can be accessed via a QR code.

The server bringing butter “just in case” pretty much sums up the crowd that typically dines at Mama Melrose’s. The bread came very fresh. It’s chewy and soft with no crunch, which would be nice with the olive oil. Sadly, the olive oil is extremely thin. You might as well dip the bread in your ice water. The bread is good, so you might as well use the butter, despite the setting.

A very pleasant cocktail that exceeded expectations! It’s amaretto forward, not too sweet or thick like similar drinks in this park. The coconut rum is a nice base that can be tasted, but doesn’t overpower the entire drink. In total, it is very well balanced.

This margarita is too heavy on the sweet and sour and orange juice, to the point that your teeth feel completely coated in sugar. Why would your mother do this to you?

For twelve dollars, you can do a lot worse with drinks. These are what you would expect: sweet, milky dessert cocktails that can’t disappoint anyone. The Stoli vanilla vodka is a quality choice. The drink is vanilla forward given the vodka and the vanilla cream, somewhat resembling the namesake. The flavor is best described as akin to an alcoholic chocolate/vanilla swirl soft serve.

Very similar in nature to the Tiramisù Martini, but different flavors are presented by the Van Gogh Double Espresso Vodka, Bailey’s Irish Cream, and half and half. It’s obviously creamier than the other, and, as a coffee lover, I was not disappointed with this flavor profile.

This brilliantly plated Caesar Salad is the most lemony flavored of its kind at Walt Disney World. It’s comprised of fresh romaine lettuce, crunchy croutons, a crispy cheddar piece, and more lemon (if for some reason you think there’s not enough).

It is lightly dressed, and there’s not an obnoxious amount of cheese — which is a nice change of pace. A fine choice.

Somehow, this Is completely flavorless. Not only is the tomato watery and tasteless, somehow the cheese has been subdued to the point you wouldn’t even know it was there. Maybe you’re eating paste? Maybe paste has more flavor though? I have no idea, but I’d try the paste after this.

The meatball was surprisingly good. Twelve dollars is a lot; however, the tomato sauce was inoffensive (a shock for Disney-operated Italian), and the meatball itself would please any meat-eater.

There is a severe lack of cheese, which is strange. Still might be worth getting for pickier guests.

Good grief. There is a lot shrimp, and they’re of a pleasant composition and not at all fishy. The pasta is doughy, the cauliflower is hard as arock and takes on the artificial flavor of the sauce. The sauce is typical Disney Alfredo sauce. It tastes slightly off with an almost chemical aftertaste. I wouldn’t order this again under any circumstances.

It would be nice if there was some sort of vegetable with the steak and pasta, but that’s the biggest complaint we have about a dish we had low expectations for anyway.

The steak was a little fatty, but it was very well cooked and very tender. It’s a little salty; otherwise, there’s nothing wrong with it. The pasta was slightly overcooked, but the thick four-cheese sauce made it edible. The pancetta tasted like chalk, but thankfully, there wasn’t much of It. This is a fine dish.

This is a thick fried chicken breast over spaghetti. It’s slightly better than the Tony’s Town Square version.

The chicken is tender with a crispy exterior, the cheese nicely melted over the top, and the spaghetti cooked well enough to be edible. An OK dish, one of the better on the menu.

The crostini was the hardest thing I’ve ever eaten. The cherry tomatoes were ripe and well cooked, bursting with flavor, but there was no flavor to be found elsewhere. Despite the advertised garlic, it’s more of an oily taste.

The cannoli was surprisingly delicious! In fact, we were blown away by how good they were compared to the mediocre appetizers and entrees. Most Disney World cannolis suffer from being rock-hard as they’ve just come out of the freezer (we’re looking at you Tony). These were served at the proper temperature with nice, crunchy shells that weren’t too hard to spoon off a piece without putting others at the table at risk. The filling tasted freshly made and had subtle citrus overtones that complimented the sweet creaminess of the dairy. A good value at $7 for 2 large cannolis. We were told they used to serve three small cannoli, so results may vary. We would order these again.

This is a unique dessert for a theme park restaurant, so we had to try it. And we are so glad we did! The rich and creamy Ghirardelli chocolate is the perfect contrast to the acidity of the sour Morello cherries—a delicious combination of two intense flavors. Add a bit of whipped cream and cherry coulis, and the pastry chef has made a memorable end to an otherwise unmemorable meal.

We would definitely order this again and wouldn’t mind dropping by Mama Melrose’s just for dessert!

Honestly, I expected worse from Mama Melrose’s. What we found was a few truly awful dish, some that were just OK, but some truly worthwhile drinks and desserts. I can’t recommend eating a full meal here, but stopping by for a few sips and a snack is a good plan to escape the heat.

Next
BREAKING: Walt Disney World Updates Face Mask Policy for Restaurants to Require Guests to Wear a Mask Even at Their Table