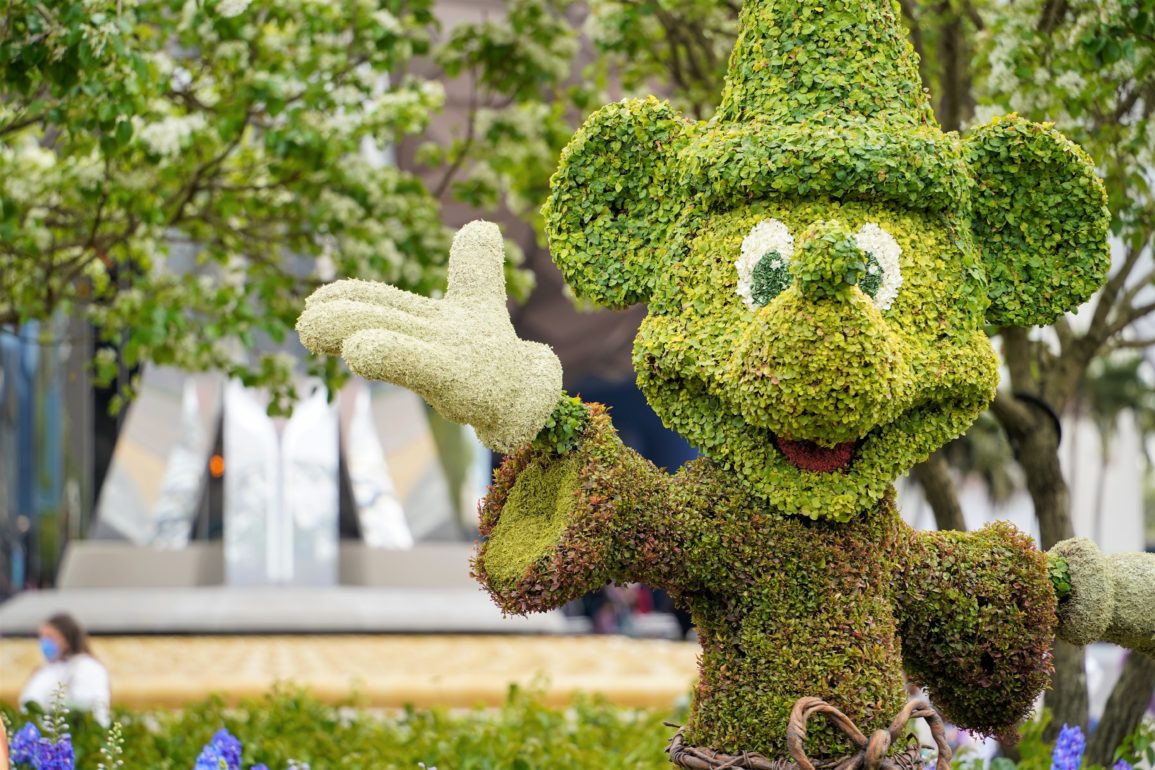 Welcome back to EPCOT! We’re rounding out our weekend at Future World and World Showcase, wrapping up the first week of Spring Break at Walt Disney World — particularly for the Orlando locals. We’re truly shifting gears into Spring, despite the cool weather, and getting ready for Easter. Let’s check out all of the seasonal fun to be had in, and around, EPCOT.

That’s right, topiaries abound at EPCOT these days as we are nearly three weeks into the Taste of EPCOT International Flower & Garden Festival. We’ll be revisiting a handful today, along with hunting some eggs.

We’ll focus on the topiaries to start. Buzz Lightyear continues to man his post outside of Mission: SPACE, keeping an eye on both the current and future MouseGear locations.

MouseGear, along with the space which formerly housed Electric Umbrella, and being hurriedly prepared to open ahead of Walt Disney World’s 50th anniversary in October.

Conversely, Guardians of the Galaxy: Cosmic Rewind is being constructed in a pretty lackadaisical manner for the past year, with no hope or intent to make the 50th anniversary.

A similarly slow-played project, work at Liquid Layer has been, well, non-existent since walls went up last September. Despite a permit for work being filed over three months ago, nothing has come of those intentions.

Outside of the Imagination Pavilion, Cast Members work to maintain some of the hundreds of thousands of flowers that are strewn about EPCOT — much like what we saw yesterday in the France Pavilion.

Finishing up Future World, outside of The Land Pavilion we spotted a Thumper Easter balloon. These balloons are not available at EPCOT, so it’s always fun to see one make the trip over from another park.

Heading into World Showcase, there’s been little activity this weekend with the Harmonious barges. For better or worse, they remain in place on the lagoon, where they’ll stay for untold years.

Unfortunately, the Three Caballeros are still only available in two-dimensional form on their attraction.

In the Norway Pavilion, Elsa has been upgraded from her position last weekend in what was, essentially, a ditch. She is now perched at the top of some stone steps, still accessible to guests but not buried in the grass.

The Frozen Ever After queue is now utilizing some backstage area. While this used to be the route Mickey & Friends World Tour cavalcade would use to exit the stage, that cavalcade is no longer taking place since Mickey and Minnie are now appearing at the front of the park.

The Morocco Pavilion continues to be both an underrated, and under-visited, location within EPCOT’s World Showcase. If you’re looking to get away from the crowds, it’s a great place to seek out.

We located Belle, and her topiary, in the France Pavilion today. The human version donned cold weather clothing, while the topiary was a bit more resilient to the weather.

At the nearby expansion to the France Pavilion, we’ve seen essentially no movement since the announcement that its attraction, Remy’s Ratatouille Adventure, and the accompanying creperie would not have their grand openings until October 1st.

In the U.K. Pavilion, Alice is out and about tending to the garden as well as interacting with guests and posing for photos.

Also in the U.K. Pavilion, the Rose & Crown Dining Room has reopened after a short, routine refurbishment which lasted a little over a month.

Like yesterday, we won’t spoil the location of these Eggstravaganza Egg Hunt eggs, but we’re happy to give you this glimpse at what you’re looking for.

Just outside of World Showplace, a lesser-seen Mickey topiary sits outside for a photo op — with a matching Minnie topiary, of course.

Finally, back at the front of the park, the Sorcerer Mickey topiary welcomes guests who enter, and also bids farewell to those exiting after enjoying a day in the park with the Taste of EPCOT International Flower & Garden Festival.

We hope you’ve enjoyed our flower-centric trip around EPCOT today. For all of the latest news from WDWNT, be sure to check in regularly at WDWNT.com or download WDWNT: The App to view all of the latest stories from the Disney parks.