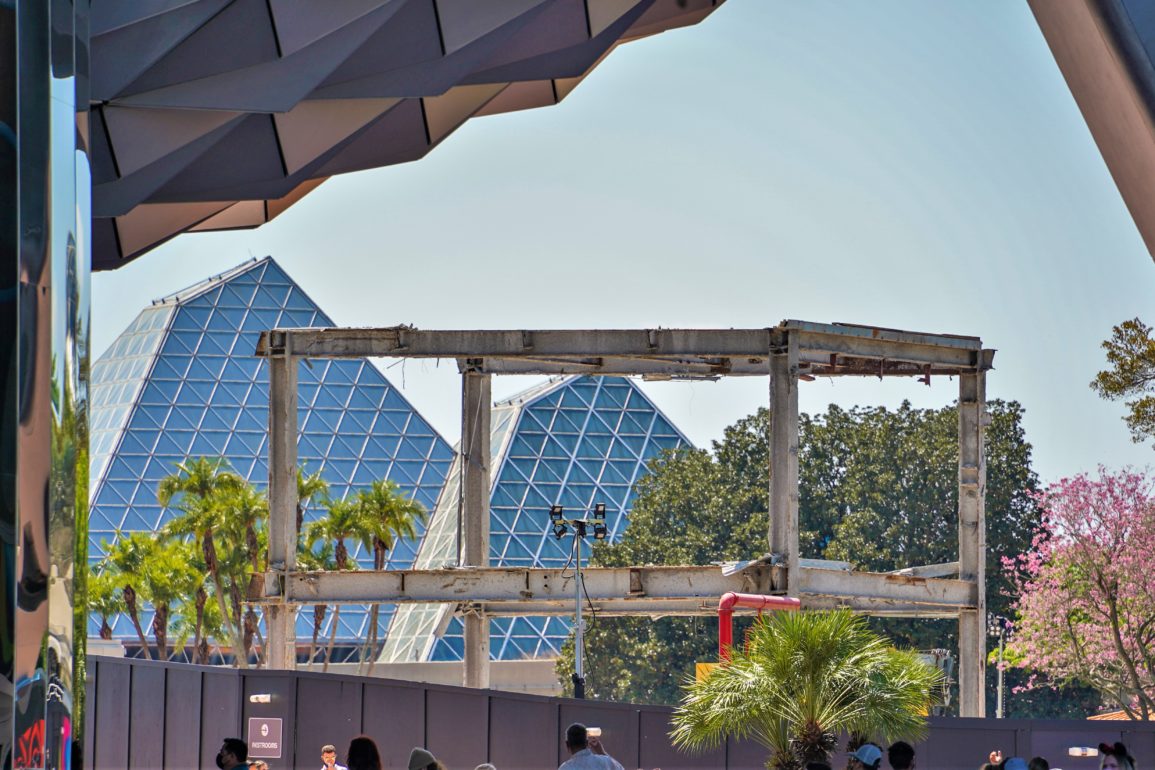 Welcome to EPCOT on a beautiful, warm Sunday! We’ve survived the time change and loss of an hour of sleep but we made it to the Walt Disney World parks to see what’s new as we work our way into Spring Break. Despite it being the weekend, there’s quite a bit going on at EPCOT and Disney’s Animal Kingdom — let’s check out all the developments in the parks.

We managed to be among the first guests in the park today, which meant a clear view of the fountain and Lucite pylons, the newly-added flags, and Spaceship Earth.

For better or worse, we also have a clear look at what little remains of Innoventions West. The long, drawn-out demolition of the structure is expected to end its final chapter overnight tonight, making today the last look at what was an EPCOT staple for many years and to many guests. It isn’t the demolition of Horizons, but it’s not far off from it in terms of the history of the park.

Inside The Land Pavilion, we thought back to the time change in March of 2020, which Living with the Land didn’t handle too well. The last year has brought forth a solution to FastPass+ clocks, and a temporary remedy to forgetting to change the time.

Innoventions East, contrary to West, is receiving a complete overhaul instead of being leveled. Mouse Gear will, eventually, be moving back to its original home which is currently under construction.

Guardians of the Galaxy: Cosmic Rewind added wood paneling to the façade overhangs towards the end of the week, and a blue layer of sealing material has now been added over those panels.

At Mouse Gear, a new garden stone has been added to the lineup of festival merchandise. The stone includes a light sensor, and in the dark Minnie lights up, showing off her pink dress and bow.

Taking a detour to visit the Goodness Garden Butterfly House, we checked out the butterflies fluttering about the enclosure and enjoying the myriad flowers.

On the topic of flowers, the thousands upon thousands of flowers that are part of the Taste of EPCOT International Flower & Garden Festival require a lot of work to take care of — thankfully there are tons of dedicated Cast Members for such a task.

Just above those flowers, the purple martins continue their seasonal visit to EPCOT.

Heading into World Showcase, we are sadly still stricken with flat wood copies of the Three Caballeros at Gran Fiesta Tour after their abrupt removal.

In the Norway Pavilion, Elsa’s physically distanced meet and greet has seen her moved to a low-lying grassy area near Royal Sommerhus. This is part of a test to slightly adjust the location of these meets, and puts Elsa at a more convenient height relative to the children she is photographed with.

Circling around to the Italy Pavilion, La Gelateria is making steady progress towards completion, with a small amount of concrete having been poured adjacent to the building.

In France, Remy’s topiary twin has a nearby message for those who are taking photos with him — keep your mask on. These new ground markers have appeared throughout EPCOT.

In the U.K. Pavilion, Alice is at her usual spot in the garden, and is even assisting the Cast Members with the upkeep of the flowers.

As we head out of the park, we get what will, sadly, be our last look at Innoventions West.

Heading out of the park, our sorrows of losing Innoventions West were slightly improved by the sight of the exit roads FINALLY being repaved. Regulars to EPCOT will recall these roads were highly worn with little to no striping remaining, making us the most excited we’ve ever been about road resurfacing in our lifetimes.

That tree can mean only one thing — it’s Disney’s Animal Kingdom time.

What a day to visit the park, as the artists responsible for the original Raya and the Last Dragon sand sculpture were hard at work on day three of three reworking a majority of the sculpture to add in new characters.

Over at DinoLand U.S.A., new limited-time St. Patrick’s Day loaded Reuben Totchos have been added to the menu at Restaurantosaurus. Did they make our hunger for holiday food go extinct? You’ll have to check out our review to see.

Back in Asia, a new Spirit Jersey has joined the ranks of 15th-anniversary Expedition Everest merchandise, which debuted earlier in the week. The top is an adorable addition to any wardrobe which values patterns including yetis with sunglasses.

Finally, as we circled around the park, we caught a couple flotillas making their way around the waterways of Disney’s Animal Kingdom.

That’ll do it for our day at Walt Disney World. To stay up to date with all of the latest news from WDWNT, make sure to download WDWNT: The APP 2.0 from the Apple App Store or the Google Play Store to your mobile device!