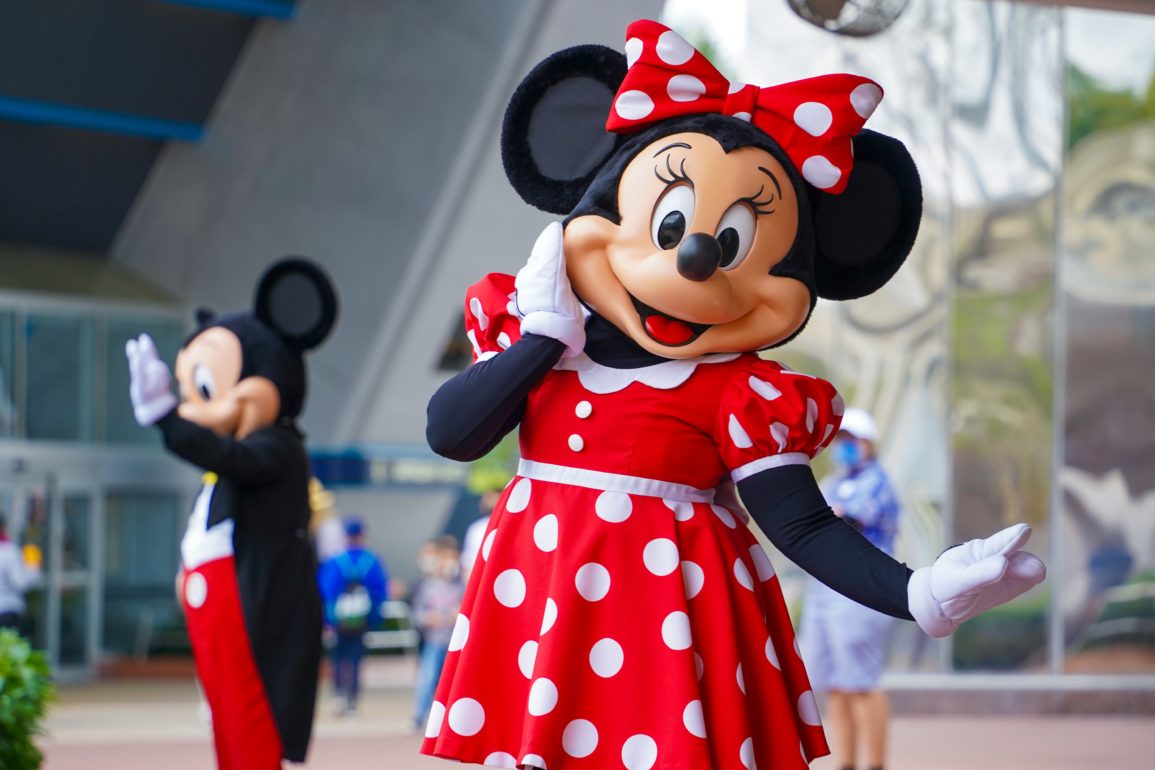 Greetings from Walt Disney World! We’re delving further into Spring Break at EPCOT and Magic Kingdom, entering what is effectively the second weekend of the school holiday around the United States. It also happens to be a chilly and overcast start to the weekend, relatively speaking. Let’s head in and see what’s in store for the day.

We started our day in EPCOT, which is synonymous with “construction”. True to form, we caught some early work at the former Innoventions West site where Journey of Water Inspired by Moana has begun to be built.

Also on the West side of EPCOT, new signage has gone up for the restrooms and lockers underneath Spaceship Earth, joining the new signage which was installed for the East counterpart.

Not nearly to the point of receiving signage, MouseGear and the Innoventions East building are at least receiving lots of attention to move the project closer to completion. While we’re still months away, the hectic work schedule means that a summer opening could be possible for the new MouseGear.

At the nearby Guardians of the Galaxy: Cosmic Rewind, we’ll be lucky to receive a summer of 2022 opening as the project makes extremely slow progress, mostly related to applying layer after layer of sealing material to the structure.

Thankfully, not everything in EPCOT is under construction, as the reliable Imagination Pavilion quietly sits on the West side of the park.

Moving into World Showcase, Disney Traders had a redemption station set up for guests to obtain the prizes for their Eggstravaganza Egg Hunt or Spike’s Pollen-Nation Exploration without having to enter the store itself.

Those Eggstravaganza eggs are hidden all around the park, though we won’t spoil their locations.

In the France Pavilion, groundwork continues on the outskirts of the area, with walls and stanchions blocking off chunks of the walkway.

The planter containing the Remy topiary was receiving some attention today to maintain its beauty.

Over in the Morocco Pavilion, work still continues on the restrooms, which have now been closed for over two months.

Lights were on again at the Princess Jasmine meet and greet area of the Morocco Pavilion, though we doubt this is any indication of the return of any up-close photo ops.

Restaurant Marrakesh remains closed, and the future of the restaurant uncertain since Disney took over operations of the pavilion.

Rounding out World Showcase, La Gelateria in the Italy Pavilion is inching closer to completion as paving work has been occurring adjacent to the structure, though there’s still a lot to be done before the new location can open.

Finally, we once again caught Minnie and Mickey at the front of the park — a debut we first reported on several days ago. While we thought these appearances may only be a test, the consistency with which they’ve appeared would indicate these physically distanced photo-ops will continue for a while.

Now we’re hopping over to Magic Kingdom, where Main Street Station remains hidden behind themed-scrim as it undergoes a prolonged refurbishment.

Heading down to the hub, Cinderella Castle is slowly having more and more adornments added ahead of the 50th anniversary of Walt Disney World.

The stage, which is undergoing a refresh of its own, looks to be about halfway through the reinstallation of heating elements that reside underneath the surface of the stage.

We’re inching closer to the completion of the frame portion of TRON Lightcycle Run’s illuminated canopy, though significant work remains for the structure to add lighting, translucent panels, and more.

At Memento Mori, the light-up gargoyle, which debuted on New Year’s Eve and has since been in extremely short supply, has returned. Cast Members advised that only twelve of them had been stocked today — for the first time in a month. By early afternoon, only half of those remained.

At Frontier Trading Post, the first of our Marvel finds came in the form of WandaVision phone cases. These two styles are both available now but they’re only stocked in iPhone variants.

Despite it being a Saturday during the Spring Break time of year, crowds weren’t too terribly bad, not quite matching what we’ve seen on holiday weekends like for Martin Luther King Jr. Day back in January.

Back at Emporium, these The Falcon and the Winter Soldier socks debuted, allowing guests to represent the newest Disney+ series. The socks sell for $14.99 a pair, or $10.00 each when purchasing two pairs.

Finally, we round out our day at Box Office Gifts, which has seen quite a reorganization ahead of the temporary closing of The Chapeau. With the Main Street hat store going down for refurbishment, Box Office Gifts would seem to be the new spot for headwear at the Magic Kingdom.

That’s it for our visit to Walt Disney World, we hope you’ve enjoyed EPCOT and Magic Kingdom today. Be sure to check in with WDWNT.com often for all of the latest stories from the Walt Disney World parks, and every Disney park around the world!

Previous
PHOTOS: Box Office Gifts To Temporarily House Hats and Headwear of The Chapeau During Upcoming Refurbishment at Magic Kingdom on March 27th