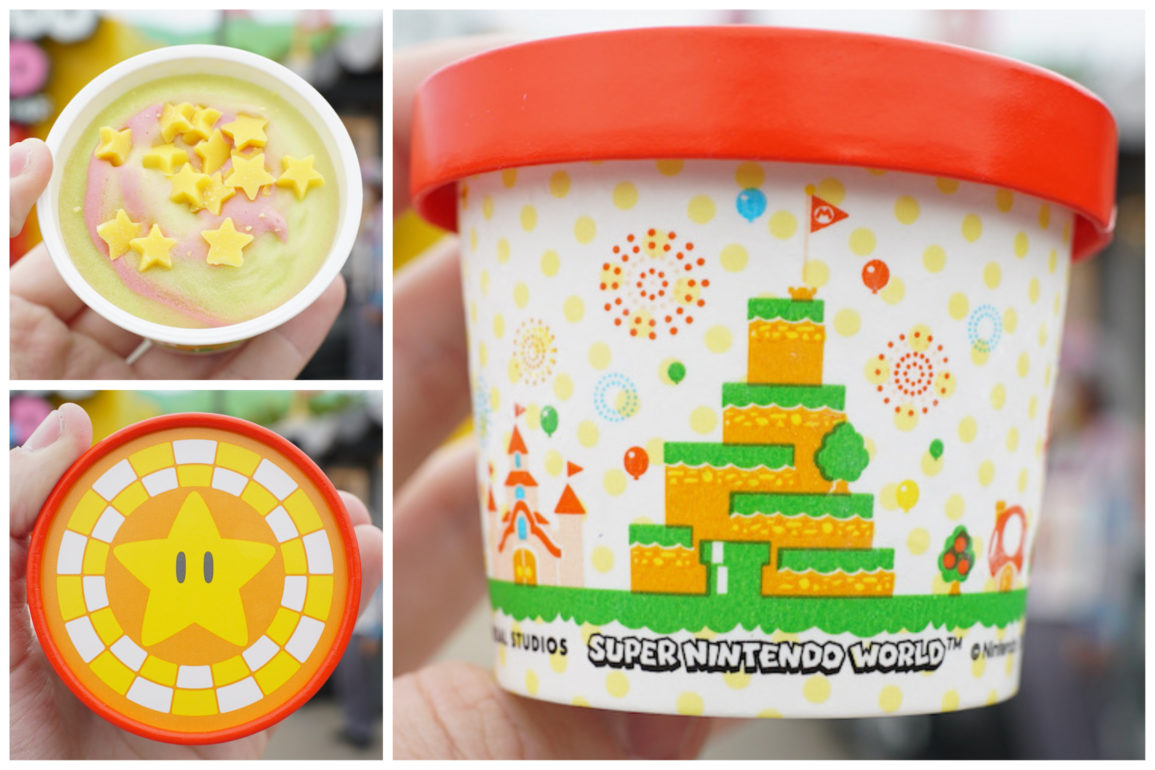 With Super Nintendo World now officially open at Universal Studios Japan, there’s so much for Guests to see, do, and, especially, eat when they visit! You might’ve seen our full reviews of Kinopio’s Cafe and Yoshi’s Snack Island, but they won’t prepare you for this special apple and berry ice cream, served exclusively at the land’s main entrance in Super Star Plaza.

Located right next to the Power-Up Band carts in Super Star Plaza is an unassuming cart, one that’s often closed actually (when we visited for four days, it was only open for two of them, and is only open before 4 PM as well). But the Crew Members you find are always very happy to sell you this treat, exclusive to Super Star Plaza!

Let’s focus on the incredible cup it comes in for a bit first! The lid features the Super Star insignia found in the center of the plaza.

Meanwhile, the outside of the cup itself features gorgeous art depicting scenes from the land, including Peach’s Castle, Kinopio’s Cafe, and Mount Beanpole. As well, it’s adorned with fireworks, polka dots, and even a silhouette of Mario jumping to grab a Super Star! This may very well be the greatest ice cream cup ever designed, which we feel isn’t an exaggeration.

The ice cream itself features a swirl of apple and berry flavors topped with white chocolate stars designed to look like Super Stars. It has a sweet, fruity taste that complements the frozen treat rather than overwhelms it. Baskin Robbins, who manufactures the ice cream, did an excellent job on portioning the tangy green apple taste with the sweeter raspberry flavor. Though the flavors taste artificial rather than natural, there’s no chemical taste here that you might typically find in other sweet treats. Once the unforgivingly hot, humid Osaka summers come in July and August, this will be your best friend to cool down after a few Key Challenges inside Super Nintendo World for sure.

Overall, we can’t recommend the Super Star Plaza Ice Cream enough! Although you might have a bit of trouble timing your visit to the ice cream cart right as it’s sporadically open, this ice cream is certainly worth the effort. Will you be trying the Super Star Plaza Ice Cream and admiring the absolutely darling cup on your visit to Super Nintendo World? Let us know in the comments below!