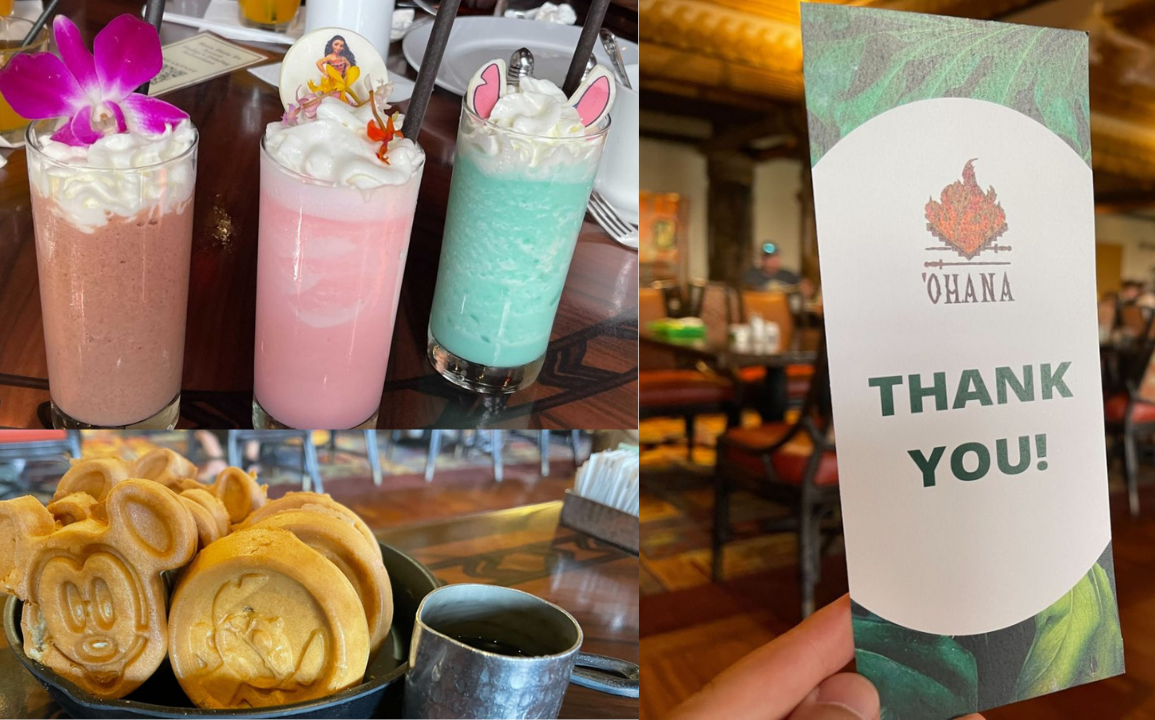 Maskless Cast Members greeted us at the check-in counter.

The rest of the Cast Members were cheering for every guest who entered this morning.

We caught glimpses of ‘Ohana preparing to reopen a few weeks ago, including some of the carpet being replaced.

‘Ohana breakfast usually has characters like Lilo and Stitch walking around, but this experience is suspended for the time being.

Breakfast is $25 per adult and $14 per child. The table gets seasonal fruit, freshly-made pineapple-coconut breakfast bread, and the ‘Ohana breakfast skillet. A plant-based version of the breakfast is available, with a cinnamon-sugar doughnut and replacements in the skillet.

Of course, we started with drinks. There are alcoholic and non-alcoholic specialties.

Woo, you can taste the wasabi in this one. It does not taste like the Bloody Mary mix we’ve had at other resorts, which is thicker and has tomato pulp. This is thinner and there is no pulp, but it’s still got a good flavor. The wasabi is very prevalent, so if you don’t like wasabi or a lot of heat this early in the morning, it’s probably not for you.

The serving is relatively small for the fact that this is the POG juice you get free with breakfast, plus some rum and grenadine. But the coconut from the rum really does bring something extra to the juice.

There are a lot of flavors going on here. It has all the flavors of POG juice, plus Midori and pineapple. The rum adds a nice spiced kick. It’s a great breakfast drink.

This smoothie is going to be a hit with kids, but it feels less special than the others in the presentation. It’s just a basic chocolate smoothie.

The Moana smoothie tastes like artificial strawberry (like strawberry NesQuick) mixed with a hint of tropical fruit flavor on the back end.

This one is basically a tropical frozen coconut cocktail without the alcohol.

The famous breakfast bread is served with butter on the side. It’s a flaky pastry, with dough like a danish. It’s fluffy and chewy in the center, but crispy and flaky on top.

It’s lightly drizzled with icing, plus pineapple and coconut flavors. It’s an ‘Ohana classic that hasn’t changed much. It was a little dry but still sweet, flavorful, and delicious.

There’s nothing unique about the fruit, but it’s fresh and plentiful and a perfect complement to this Polynesian breakfast.

Mickey waffles are a classic, but they always seem to be better cooked here than at other places on property.

They have a nice crisp outside and are fluffy and moist on the inside. Both Mickey and Stitch didn’t disappoint.

The potatoes are good and taste fresh instead of frozen. A couple of wedges were a smidge undercooked, but they were all well-seasoned.

The sausage is typical of any other Walt Disney World breakfast. They were cooked well, had a good flavor, and weren’t overly salty.

The ham comes topped with a pineapple compote. It’s a typical sliced boneless ham, but a little dry. It’s not anything special, like fresh roasted or hand-carved. But the compote is delicious and adds a nice sweetness that compliments the salty ham.

As is typical with family-style breakfasts, the scrambled eggs aren’t gonna be as well-cooked as other breakfasts. They were a little dry, for a crumbly consistency, but were fine.

You can custom order eggs cooked in other ways. We got two eggs over easy and they were cooked perfectly.

The biscuits are fantastic. They were perfectly cooked, as well as buttery and light. These are the biscuits you expect at ‘Ohana breakfast.

Breakfast was good and all the typical foods you’d expect at ‘Ohana, but without the characters, it felt a little underwhelming. It was wonderful to be back in the space, and Cast Members and guests were overjoyed. But this isn’t the best breakfast we’ve had at Walt Disney World. There aren’t any items that stand out and nothing that we were eager to have more of.