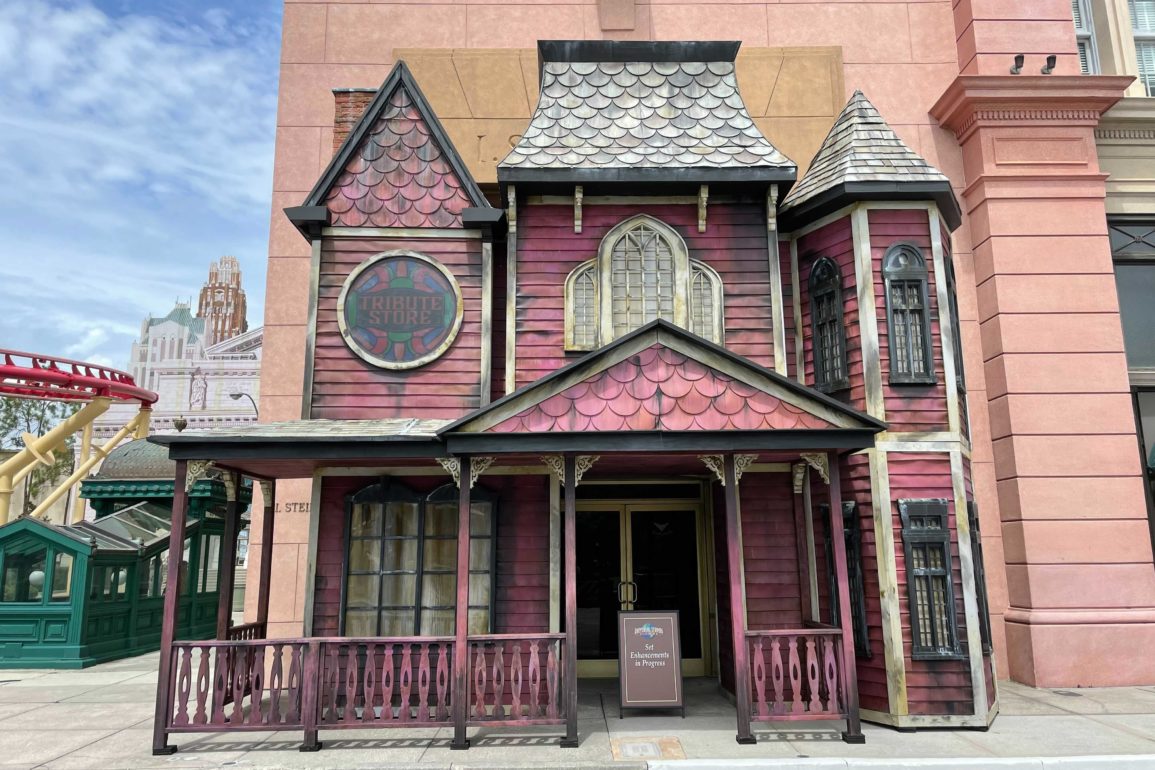 We are a little over two weeks away from Halloween Horror Nights 30, and preparations for the event are rising across Universal Studios Florida. We have a lot to see today, so let’s get started!

All eyes were on the All Hallows Eve Boutique at Islands of Adventure this weekend while here at Universal Studios Florida, work moved quickly along on the façade for the Halloween Horror Nights Tribute Store.

The façade has taken the form of an old, likely haunted, house with worn and weary siding and a dilapidated porch.

Hopping over to San Francisco for the CryptTV scare zone, a lot of changes have been made.

The Birch symbol has been added to the table here.

At the stage for “Itsy Bitsy Spiders,” the tarp that previously covered the structure on the right has been removed, revealing two suspicious hanging bags.

On the small platform in front of the stage is what appears to be an actor-activated trigger. Scareactors use these to set off various effects, including special lighting or sounds.

At the set for “The Look-See,” a curtain has been added to the shower.

Half of the shower has an additional covering behind the new curtain, possibly obscuring additional set dressings.

A necklace has been added to the edge of the sink basin.

Finally, the burlap has been removed from the mirror, confirming the poem from “The Look-See.”

More equipment has been added to the scene from “The Door in the Woods,” including camouflaged speakers and more actor-activated triggers.

The small trailer has been decorated with Christmas wreaths and lighting.

This scene is possibly related to the CryptTV short film “Milk & Cookies.”

Another small trailer is now decorated with sports paraphernalia.

Trophies adorn the roof, along with two field hockey sticks.

On the other end, a trophy cabinet has appeared.

It holds a photo and placards for Shelley Carter, the titular character from “Silent Shelley.”

In Central Park, new trusses have been installed. These will likely hold the marquee for the new Marathon of Mayhem: Carnage Factory lagoon show.

A large steel structure has been added to the stage in the nearby Gorewood Forest scare zone. It is covered in large red drops that look like viscous blood or wax.

The Cemetery Mines have returned, last seen in 2005. Gorewood Forest is a part of Terra Cruentus, a land ruled by the terrifying Terra Queen (an original character designed for Halloween Horror Nights).

The Cemetary Mines were home to the creepy Knucklegrunts who guard the mines.

For one last look at the Halloween Horror Nights preparation today, we made a stop at Animal Actors on Location!

From inside the amphitheater, we got a peek at the façade for Puppet Theatre: Captive Audience.

For the full Halloween Horror Nights 30 lineup, check out our list here. If you want to know more about the lore behind the event, follow our ongoing retrospective series here.