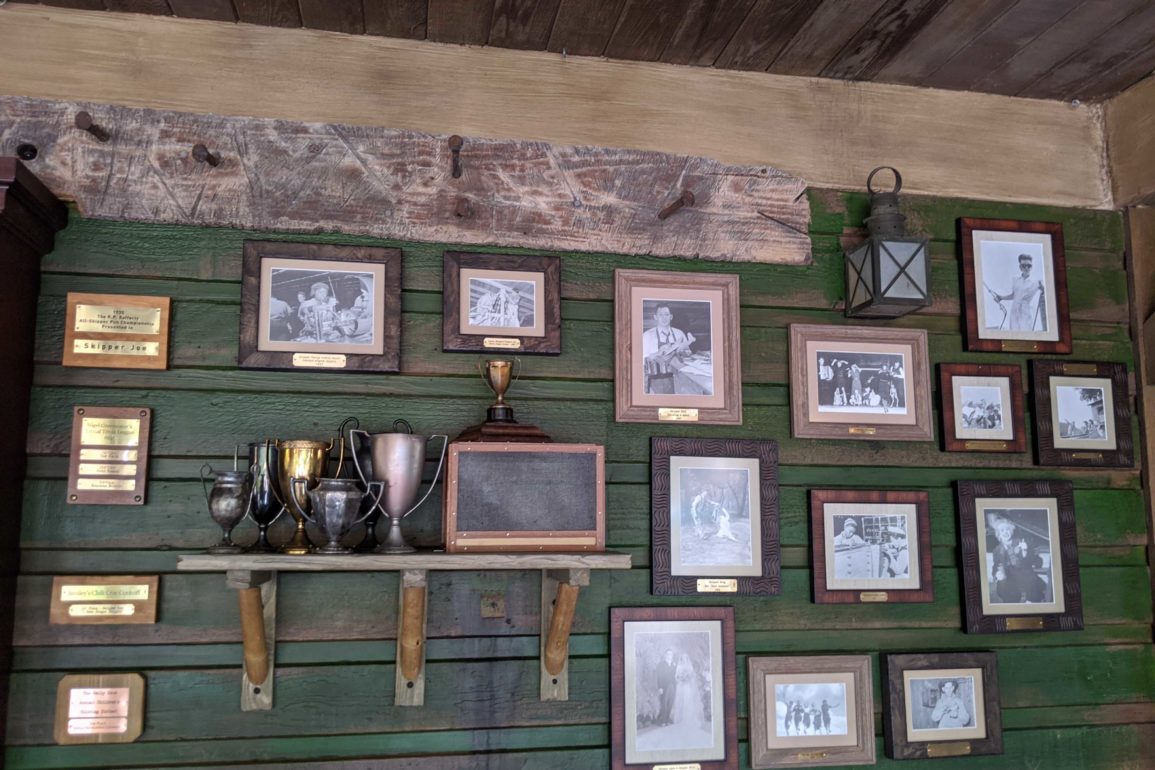 Greetings, adventurers! With the culturally sensitive enhancements to the Jungle Cruise now complete at the Magic Kingdom, we’ve noticed some “gnu” additions to the queue. Let’s take a look!

Near the old FastPass+ kiosks, a trophy wall has been installed, featuring images and artifacts from the Jungle Navigation Co. LTD’s history.

Each photograph has a caption honoring great skippers of the past… at least the ones they can find.

A few of the more prestigious awards are located in a cabinet.

I’d like to point out some of my favorite pictures. There’s this one, and that one, and don’t forget that one. But seriously, let’s take a closer look!

Skipper Dottie is hard at work repairing the Amazon Annie in the above photo.

A team of skippers show off their puppetry work in the Schweitzer Follies of 1936.

Skipper Jennifer dons her best clown getup in this photo. (I hope it was for the Follies.)

Skipper Greg has his hands full in this photo of “The Bird Incident.”

A few Junior Skippers get ready for their first Jungle Cruise.

As we started with boat repairs, we end with this picture of Skipper Marge working on an engine.

This plaque for the 1935 K.P. Rafferty All-Skipper Pun Championship is likely a nod to Imagineer Kevin Rafferty, who retired earlier this year.

Teamwork makes the dream work… at least it did for the Jungle Navigation Company, who placed second in The Daily Gnus Annual Children’s Coloring Contest.

Even skippers love a trivia night! This plaque honors the top finishers of 1937.

For adventurous palates, Skipper Kaz is honored for his prize-winning chili, the “3 Bean Ginger Delight.” Both Smiley and Ginger are the names of crocodiles found in the attraction.

Entering the cabinet, we see a wonderful prize, the Backside of Water Award!

Perhaps in a nod to the influence the True-Life Adventures documentary series had on the Disneyland version of the ride in its early days, the Adventureland Film Festival honors its prize winner, Skipper Shaun’s “A Bigger Bote.”

The Order of the Golden Piranha certainly has some bite to it!

That group must be good: they won the World’s Greatest Award! Award.

A pair of plaques tucked away honor the winners of the 17th Annual Amazon 3,977 River Race and Rookie Skipper of the Year.

Elsewhere in the queue, a bouquet of flowers have been added, sent to Alberta Falls from Rosa.

The new flowers can be found in the office, on the shelf above the gramaphone.

New boxes have been added around the queue. Hopefully, the creatures that normally go in these haven’t arrived yet… unless they’ve already escaped.

Finally, a pair of murals have been added to the queue. As we reported earlier, Alberta Falls appears on this mural of a team of skippers preparing for another voyage.

Alberta looks on as the team makes their final adjustments.

On the dock, a skipper gets ready to unmoor the boat, while on the far dock, what looks like a briefcase is being delivered.

More skippers load the last of the cargo, while another stands by with a clipboard, possibly going over a checklist.

This skipper looks ready to go!

The bottom reads, “Let our family take your family on an adventure of a lifetime!”

At the exit, a second mural provides a map of the jungle, with plenty of references and thematic quotes.

One corner reads, “Here is adventure. Here is romance. Here is mystery. Here is the World-Famous Jungle Cruise.”

The map references many of the recently-changed scenes, including the “Boats & Baits and Bites” shack, as seen above.

Another spot notes where the gorilla territory is, claiming it’s a “Horrible Camping Spot!”

The compass features the logo of the Society of Explorers & Adventurers, better known as S.E.A.

Hungry travelers are directed to the Skipper Canteen from the East Dock.

The bottom left corner reads, “To Albert, Here’s to many more adventures of a lifetime. – F.W.” The F.W. is a reference to Frank Wolff, the character played by Dwayne “The Rock” Johnson in the recent movie adaptation.

Another note says “Ancient Temple! Do Not Touch Anything!”

“Hyenas love our jokes.” Unfortunately, rhinos don’t have as good a sense of humor.

Out by the piranhas, you can find a “great fishing spot!”

And of course, it wouldn’t be the jungle without the famous Schweitzer Falls!

Just be sure to watch out for the chimpanzees!

The lost and found is also on the map, though I don’t think they’ve seen the changes Trader Sam has made to it.

Alberta has also left a note, reading “Hey Ships, I updated this old map for us! Remember to stay safe, stay friendly, and stay in the boat! Kungaloosh, Alberta.”