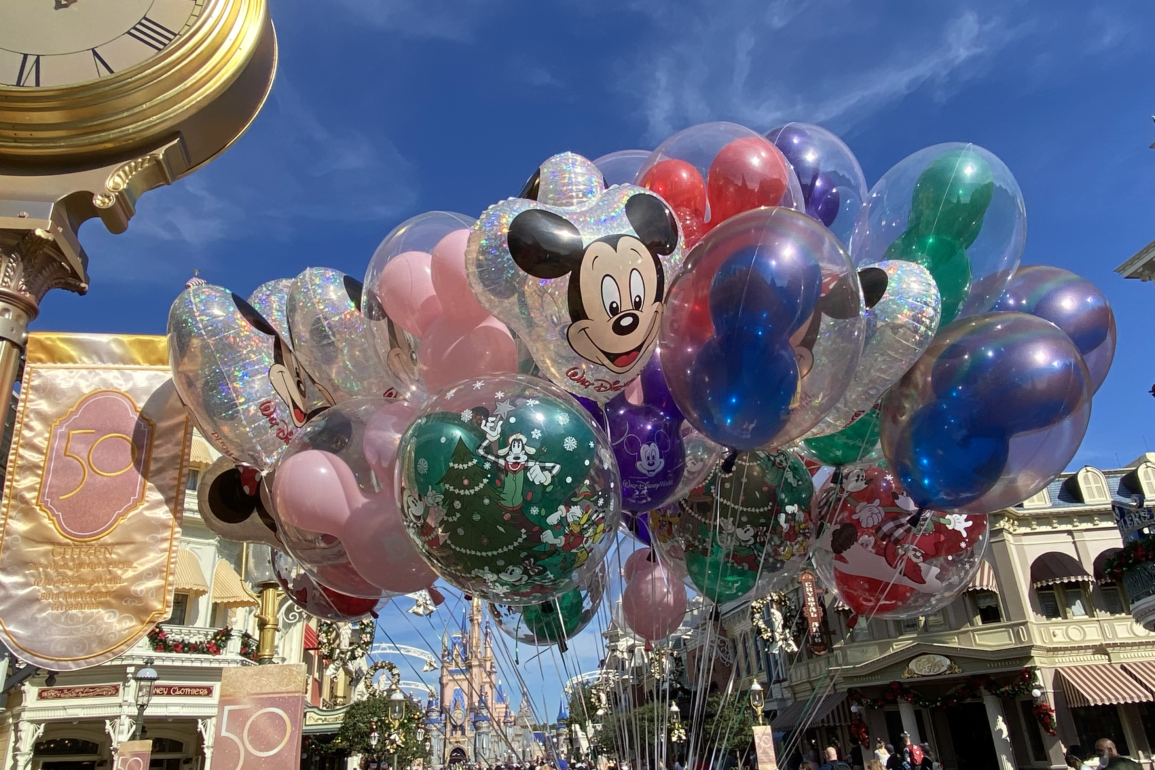 Good morning from Magic Kingdom! We’re starting our day at Cinderella Castle before making our way to EPCOT and finally, Disney Springs.

A few new Walt’s Holiday Lodge items arrived at The Emporium including a stainless steel tumbler and a mixing bowl set.

TRON makes headway as the arches and railroad track are assembled, following walls coming up on the mystery structure.

Customizable 50th anniversary MagicBands featuring Minnie & Mickey and the parks are available at the MaDe kiosks starting at $29.99.

Walt’s Holiday Lodge MagicBands are out under the “Limited Release” section on the kiosk as well.

The “Beauty And The Beast” Apple Watch Band is now customizable.

More solvent has been poured over the jungle green pavement in Adventureland, covering almost the entire area save just under the popcorn cart.

Green Christmas balloons are floating down Main Street to go along with the red ones that returned recently.

Making our way over to EPCOT, we got aerial views of the future Connections Cafe as well as construction progress at “Moana” Journey of Water, where concrete platforms have made an appearance.

Inside the park, an area is marked off just beyond the fountain where one of the new Photopass Super Zoom Magic Shots is available.

The final paint color for the pillared arms over at Guardians of the Galaxy: Cosmic Rewind has been chosen, as workers paint black over the patchy orange.

A new Photopass photo in The UK pavilion features a same-sex couple for the shot.

A few sections of pavement at the Imagination Pavilion have been replaced with fresh concrete and paint.

At Disney Springs, a shining blue 50th anniversary bomber jacket is glittering in World of Disney.

A small collection of new park-related shirts are available next to the 50th anniversary merchandise section.

A new collectible medallion machine is at the entrance to World of Disney near Waterside Stage. You can choose Olaf, Jacques, Gus, or Cheshire Cat.

The newest shop on the block after Jo Malone’s recent opening, Kendra Scott, now has window stickers up where its store will open in spring 2022, near Ever After.

A new collection of Mickey Mouse Dooney & Bourke bags are coming soon at Ever After.

Down at Galactic Outpost, a Boba Fett armor sweatshirt and “Bounty Hunter” shirt are taking over the shelves.

Thanks for following along!